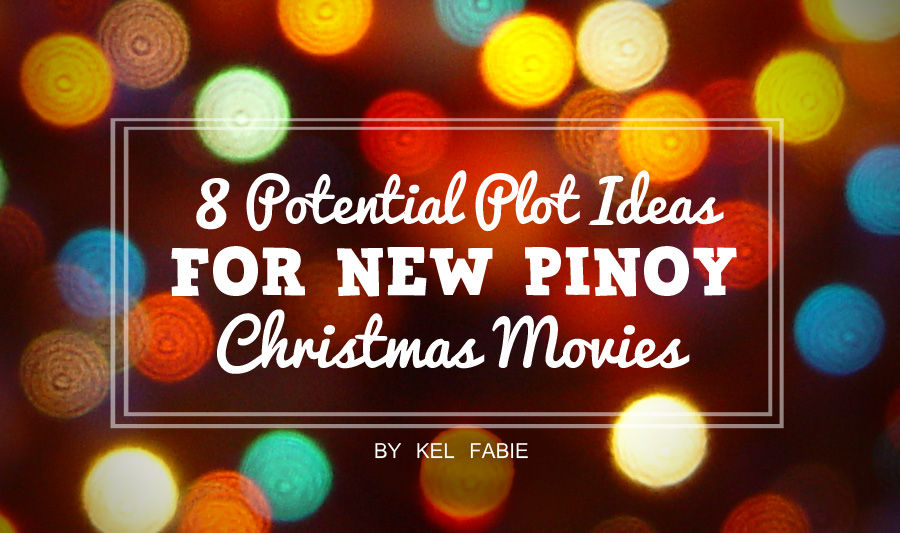 [dropcap letter="D"]espite the fact that we have an annual film fest during Christmas, doesn't it seem weird that we only ever get a handful of actual Christmas films coming out at the same time? Well, we can't have that now, can we? So without any further ado, here are a few of my random ideas for new Pinoy Christmas flicks. Producers, no need to pay me. You're welcome.

We have superheroes all the time, but wouldn't it be awesome if we could have one who shows up during Christmas time? He could stop snatchers and muggers and remind taxi drivers that the taxi meter is there for a reason. If we get a muscular guy, we could call him “Paskoliath!”
Suggested Lead: Derek Ramsay. Put a mask on him, limit him to action scenes, and put him in a skintight outfit. There is no way you can go wrong with that when you pretty much don't require Derek to act at all.

Meet Divina, a devout Catholic who made a vow at the deathbed of her mom to never miss out on Simbang Gabi for the next fifteen years. On her last year, strange signs have come abound, leading up to her discovering that her life is in danger from a diabolical being who wishes to do her harm if she completes this year's Simbang Gabi. Torn between her commitment to her vow and the mortal danger she faces, she would have willingly given her vow up – had she not discovered something that would make risking her life worthwhile.
Suggested Lead: Who better to pull off the saintly but strong woman other than Sarah Geronimo? If you wanted to skew a bit older, you can make Gloria Romero play the late mom, and go for Iza Calzado, who I heard, totally looks like Mama Mary.

Bong-Bong and P (Editor's Note: That is not a name they would allow for a family film.) are rival puto bumbong vendors trying to outdo each other so they can provide for their respective parents. This competition ramps up over the course of Simbang Gabi, with one trying to upstage the other with various gimmicks and antics, until the most unexpected thing happens between the two of them: they fall in love. Unfortunately, this doesn't make the competition go away.
Suggested Leads: John Lloyd Cruz and Anne Curtis. While Anne may seem too pretty, if her “juicing” incident last year was any indication, she can handle the palengkera character juuuust fine.

5. An Animated Feature About A Child Discovering Christmas Throughout Philippine History

This is pretty self-explanatory, isn't it? Bonus points for depicting how Christmas was (read: none) during the pre-Hispanic times!
Suggested Leads: Let Santino voice the kid, if puberty hasn't ruined that yet. Let Kuya Bodjie of Batibot fame do the kickass narration.

4. A Comedy About An Office Christmas Party Competition

Meet Fred and Wilma, the husband-and-wife tandem behind the Maintenance Department, who has been defending champion for the annual Christmas Party presentation for the past four years. With a special prize on the line if they make it five straight, the pressure is on for them to come up with something that would blow their competition away – but this time, their fiercest rivals, the Accounting Department, is more than ready to take the crown away, even through underhanded means. Will they make it five in a row?
Suggested Leads: Eugene Domingo and Janno Gibbs. Both believable in the role, and both very gifted with comic timing. You can even throw in Pokwang and Tsokoleyt for extra comic relief, if you're so inclined.

In a Utopian Philippines, how is Christmas celebrated? Why, with love and heartwarming moments, regardless of the time period, of course! Think “It's A Wonderful Life” set in 3014.
Suggested Leads: Ryza Mae, Vilma Santos, and Christopher De Leon. Yeah, we're pulling out all the stops for this one.

I don't care what the storyline is. I don't even care if you reuse one of the other seven here. Just make a frigging Christmas Musical already!
Suggested Leads: Ogie Alcasid and Sarah Geronimo. Gotta have a single dad element in the film for added pathos.

The Patron Saint of the Filipino Christmas deserves no less. Focus especially on the process he went through to come up with the 1990 album “Christmas In Our Hearts” and why he never seems to age, and if his seeming eternal youth has anything to do with the rumors that he is cryogenically preserved every year except around Christmas time.
Suggested Lead: If we don't let Jose Mari Chan play himself for this one, it's time to bring out our heavy gun for acting gravitas – Joel Torre. Let's hope he can sing.