8 Crazy Acts that Mariah Carey Did In Her Concerts 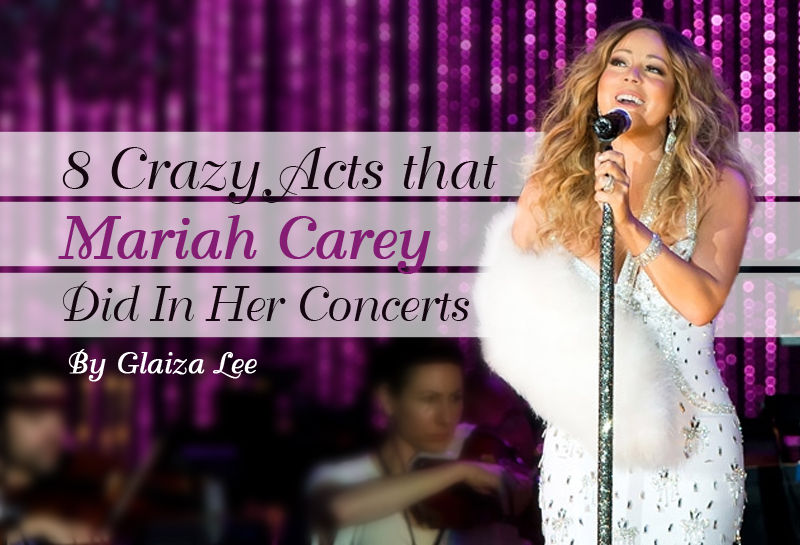 The Elusive Chanteuse returns in Manila this October. She will once again capture the hearts of her fans and music lovers with her soulful voice and awe-inspiring performance.
Known for her five-range vocal talent, Mariah Carey is the voice behind some of chart-topper songs such as "We Belong Together," "One Sweet Day," "Touch My Body," "Hero," "Always Be My Baby," and "Fantasy." She has 18 songs that took the top spot on the Billboard charts such as "Love Takes Time," "Vision of Love," "Heartbreaker," "Thank God I Found You," and "I'll Be There."
While waiting for the Big Day, let us travel back in time to take a look at her past concerts where she did 8 unforgettable acts on stage.

During her Charmbracelet World Tour in Manila in 2003, she noticed a bug on the floor. She jokingly said:
"There is a bug on the stage and it is scaring me."
She said it in a funny way, not at all demeaning, that no one got offended at all. Everyone couldn't help but laugh.

When she was about to perform "I Don't Wanna Cry" in her "Daydream Tour" show, she removed her shoes and threw them in the center of the stage. She was barefoot the whole time she sang the song.

6. Her Taste Of Australia

During stint in Australia, she tried vegemite, a local delicacy, on stage. After she tasted it using her finger, she jokingly said: "If somebody doesn't bring me a glass of water in 1.5 seconds, someone's going to get fired."

Even a diva of her stature still experiences some mishaps when performing. During a performance in Singapore in 2009, Mariah fell on her butt. She blamed her shoes which she said wasn't put on properly. Her dancers all came to her rescue. But of course, being professional, she stood up, composed herself and ended the performance with a bang.

Mariah Carey doesn't mind sharing her stage. In one of her concerts, she brought with her Bing and Bong, two cute dogs which were given as gifts to her, on stage. In her stint in Melbourne in 2013, she was joined on stage by her twins Roc and Roe.

3. The Queen Of Impromptu

Mariah likes things spontaneous--she loves to improvise a lot in her concerts. Sometimes, instead of talking, she would sing what she needs to say. She would tell funny anecdotes about her or her crew on stage. What people don't realize is that she has a great sense of humor.

If you ever wondered what is happening behind the scenes just before Mariah Carey steps on the stage for her first number, wonder no more. In her "Angels Advocate Tour" concert in 2009, Mariah would do her re-touch right there on stage, even summoning her make-up artist and hair specialist to the work. Indeed, the stage became the backstage!