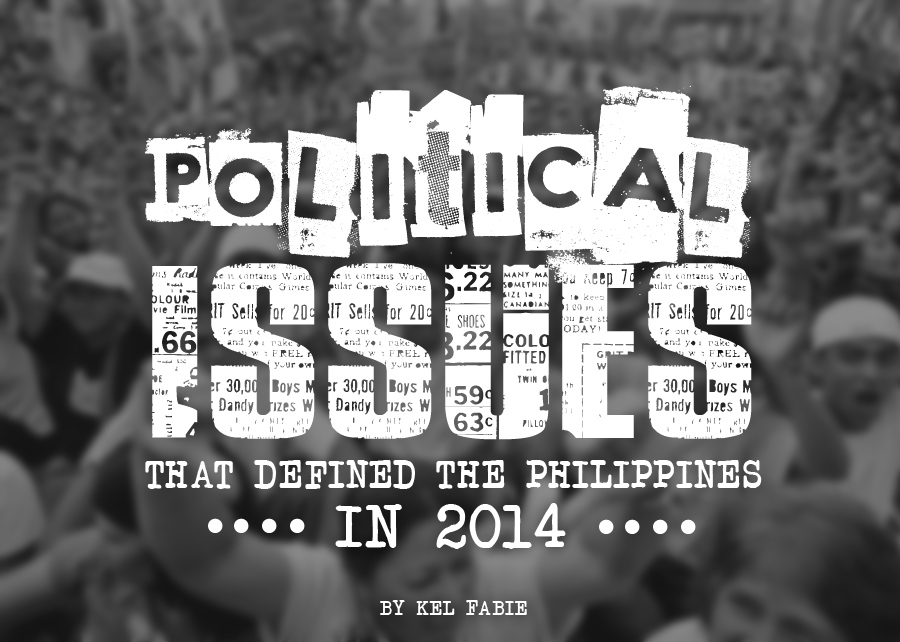 In retrospect, 2014 was a year fraught with political maneuvering and intrigue, characterized by the sharp decline of the current president's popularity, which certainly lasted three years longer than most people expected.

While there were far more than 8 huge political issues that plagued the nation in 2014, it feels that from these 8, everything else just emanated, from the biggest of issues, such as the continued long, hard look at the Priority Development Assistance Fund (PDAF) and the Disbursement Acceleration Program (DAP), to the smaller ones, such as the apparent lack of support for Filipino Figure Skater Michael Martinez during the Sochi Winter Olympics.

Let's look back at these issues, and hopefully, derive some lessons we really should be learning sooner rather than later.

CurrentStatus: While discussions have died down, the legality of these laws now silently work their way into our daily lives. Also, believe it or not, the FOI bill has been passed on third reading last March, but no word on that so far.

The Lesson: A problematic article in an arguably good law doesn't invalidate the rest of the law.

The Issue: Last October, Jennifer Laude was murdered, and because this was allegedly done by an American military officer, discussions about sovereignty and US-Filipino diplomatic relations inevitably came into play. And yes, given that Laude was transgendered, short-sighted and ultimately irrelevant attempts at victim-blaming and transphobia muddled the issue.

Current Status: US Marine PFC Pemberton is still in US custody. Laude's parents made a big deal of Pnoy not attending her wake, even though it should be clear that the president can't attend to every important issue this nation faces (and make no mistake: Laude's case was definitely important), and the investigation is ongoing.

The Lesson: Jennifer Laude was murdered. Let's prioritize solving that.

The Issue: An impending power crisis in the next year or two has led to Pnoy asking congress to grant him “emergency powers.” What these powers happen to be is anyone's guess, but there is definitely backlash hitting the Aquino administration over the fact that they never acted on it until now, despite having been aware of the looming problem for a loooong time already, seeing how they were blaming the Arroyo administration over it since last year.

Current Status: Just earlier this month, he finally got his wish. Congress has given him the powers he so needed.

The Lesson: Remember the 6 P's: proper planning prevents piss-poor performance. Also remember that we're sitting on a still-maintained and relatively new nuclear power plant, which we are just wasting because the Marcoses thought of doing it first. And in the event people will insist that putting the plant in Bataan was a bad idea in the first place, then refer back to the 6 P's, I guess.

The Issue: With the Vice President well in the lead in opinion polls for 2016's presidential race, several issues cropped up, alleging that he has a lot of land and an overpriced city building merely as the tip of the iceberg for his supposed rampant corruption. His daughter, Senator Nancy Binay, certainly hasn't helped things with her antics.

Current Status: The people who have been taking shots at VP Binay, such as Alan Peter Cayetano, or DILG Secretary Mar Roxas, or former Makati Vice Mayor Mercado all seem to have their own issues to deal with, too. Just another day in the “tu quoque” world of politics.

The Lesson: When it comes to politicians, we all have to be egalitarian. Let's hate them all equally.

Via newsinfo.inquirer.net
The Issue: This year marked the arrests and subsequent detention of Senators Jinggoy Estrada, Bong Revilla, and Juan Ponce Enrile.

Current Status: Welp, they seem to be doing just fine. Are they even still in custody? It feels like nothing is happening to them at all, unfortunately, especially with one of the courts inhibiting itself from handling the plunder case against Jinggoy.

The Lesson: The next time one of them complains about their cell facilities, there's an air-conditioned piggery for them to use...

The Issue: Despite the fact that this campaign has been brought up in August of 2013, it wasn't until March this year when Kim Henares really got on everybody's nerves. Nobody was safe. Market Manila? Manny Pacquiao? An X-Factor winner in Israel? They were all fair game because Kim Henares had a quota to meet.

Current Status: Secretary Henares is still trying to tax our 13th month pay more, because endearing the BIR the citizenry isn't one of the priorities of Kim Henares. Obviously, our taxes still aren't going to the right places, if the PDAF, the DAP, and all these so-called haciendas are any indication.

The Lesson: We need to pay our taxes because our favorite congressman's swimming pool isn't going to construct itself.

The Issue: Oh, man, where do we start? Earlier in the year, we had a rash of bus accidents, including one that took the life of activist and comedian Tado Jimenez. Then, we had people who astutely observed how bad the MRT was, from the snaking lines during rush hours to an MRT getting derailed and overshooting a barrier. Then Erap had this truck ban that slowed everything down. Then, he took it away. Now, as per usual, we also have extortionist taxis, some kerfuffle with Uber,

your usual share of abusive drivers and/or traffic enforcers, and all the criminal MO's in the transportation system you can shake a stick at.

Then, the politicians got into the whole fray. You had Senator Grace Poe, DOTC Secretary Abaya, and DILG Secretary Mar Roxas riding the MRT, a bunch of ill-advised statements here and there, and a host of other general stupidity.

Current Status: Despite the media and political circus, our transportation issues have not been alleviated one bit, with the exception of lowered jeepney fares because crude oil dropped in price in recent months. Oh. Did I say “alleviated?” I meant “complicated,” because naturally, the jeepney drivers didn't like having to bring down their prices, especially not in December.

The Lesson: Traffic jams galore await you at this so-called Tuwid Na Daan.

The Issue: While the PDAF was abolished as unconstitutional by the Supreme Court, people further asked about the DAP, which is a fund very similar to the PDAF, except it is under the sole discretion of the president. Then, the Supreme Court declared that unconstitutional, too. Then people started alleging the president was using the money for political leverage. Then, the president decided that the SC had too much power, if they can keep overriding him like that. Except wait a minute: isn't that the whole point of having three co-equal branches of government? So they can check and balance each other? Guess Pnoy missed the memo.

Current Status: While it looks like none of the impeachment cases against the president will prosper, and the potshots in each other's direction has certainly slowed to a crawl, relations between the administration and the judiciary remain less than peachy.

The Lesson: The Philippines has three co-equal branches of government. We have the executive side, the legislative side, and the judiciary side. These branches hold different functions but are in place to prevent one side from being too powerful. The president needs to remember that. And come to think of it, so does Senator Nancy Binay, seeing as she thinks Senators shouldn't be able to order Vice Presidents to do anything.