Keanu Reeves is back in combat shape. With a sword! Dishonor, revenge, and a surplus of combat against both armored warriors and magical beasts form director Carl Rinsch's homage to Anime, Miike, and a slew of both Japanese and HK action movies.
Reeves leads the all-Japanese cast of the titular small band of ronin (masterless samurai) as a half-Caucasian, half-Japanese outcast named Kai.
He's taken in by the family of Lord Asano (Min Tanaka), the daimyo of the provincial fief of Akô, when he was found near death and trying to escape from his demon-infested home. He’s since been raised in the protection of the Asano fief, albeit shunned and outcast by the other men, even with his amazing ability to wield a sword. His only friend is the Princess Mika (Ko Shibasaki). Yeah, love angle there, no doubt.
Soon the fall of the House of Asano comes to fruition as the evil Lord Kira executes his plan to deceive the Lord Asano Naganori by black magic. Kira succesfully urges the aging Asano into attacking him while the Shogun is housed at the Asano castle. Lord Asano is then compelled to commit ritual suicide to rescue his clan's honor for assaulting a court official.
In the wake of his death, his household is left in tatters, his daughter engaged to and in the care of Lord Kira, the Asano samurai stripped of honor and rendered masterless. A year later, uncovering how their lord was deceived, the ronin plot their revenge and recruit Kai to their cause. 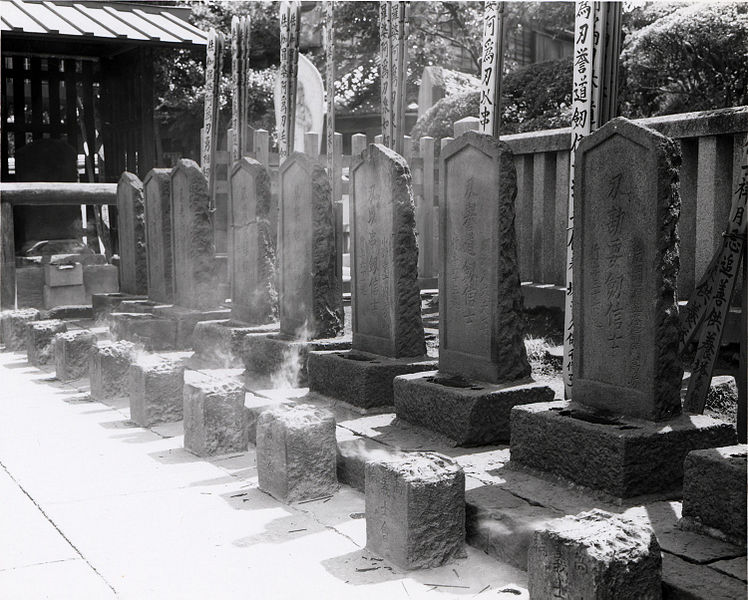 Via en.wikipedia.org
Yes, the 47 warriors were historical figures who lived during 18th century Japan, and the battles for vengeance they fought were also equally as legitimate. Like many stories that were set so long ago and fogged over by re-telling down the centuries, they've since became the stuff of folklore; something more than fact. Meaning, they are now more metaphor, just like the 300 Spartans were to the Greeks or the Battle of Little Big Horn to Gen. Custer. In Japan's case, it's the most famous example of the samurai code of honor or bushido. The graves of the 47 ronin at Sengaku-ji are a regular tourist attraction where people can pay tribute to those who stuck to their loyal guns and gave their lives for honor.

7. A breadth of literature and films 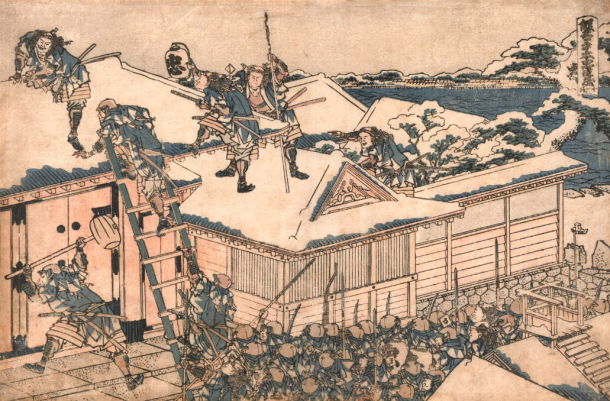 Via ign.com
The inspiring story of battling against overwhelming odds is so popular that it's been the subject of over 80 films, plenty of books, graphic novels and TV series. So there's much more to dig if you didn't like this Keanu-led version
Just like this 1994 feature. 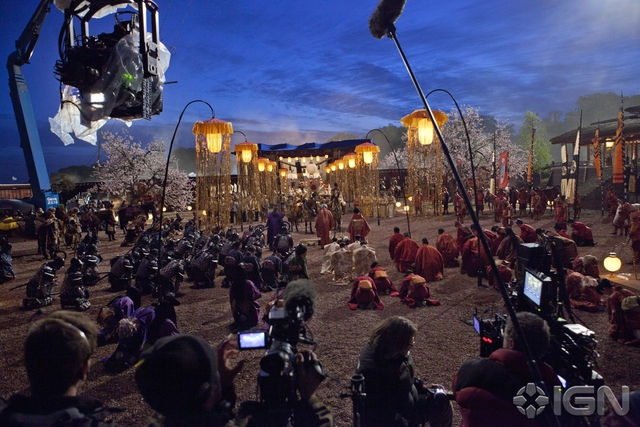 Via ign.com
The set pieces, costumes, and cinematographic integration of the CGI into real scenes are near flawless. The court scenes overflow with bold and lush prints, the kabuki sequences are a showcase of how opulent Japanese culture can be. Just wait for some of the fireworks and how the ronin incorporate it into their plan of assault on Lord Kira's castle. The manifestation of the Witch’s powers, too, as flowing, floating silk that runs like water illustrates both the level of her pact with evil and its strength.

The strictures of Japanese feudal politics, the importance of honor, and the value of being loyal even after your lord has been dead for a year are all part of what makes the East such an exotic and foreign place. Though it plays hooky with some of the facts (I mean, they put magical beasts and a white guy in there), Rinsch's version does keep the flame of the core pillars of the ronins' story: loyalty even unto death, honor above all. This movie could not have ended any other way, too. If you're not familiar with the legend, then I won't spoil it for you.

Albeit there are no ninjas in this movie (IKR) the aspirations of this film to the epic is enough reason to fill the screen with violent clashes, bloody swordplay, and enough awesomeness to keep you shoving popcorn into your mouth. Don't believe the hype of the news of a US theatrical flop, if you enjoy action movies as is, then there's no way the battles here don't qualify as reason enough to sit through an hour of this good stuff. 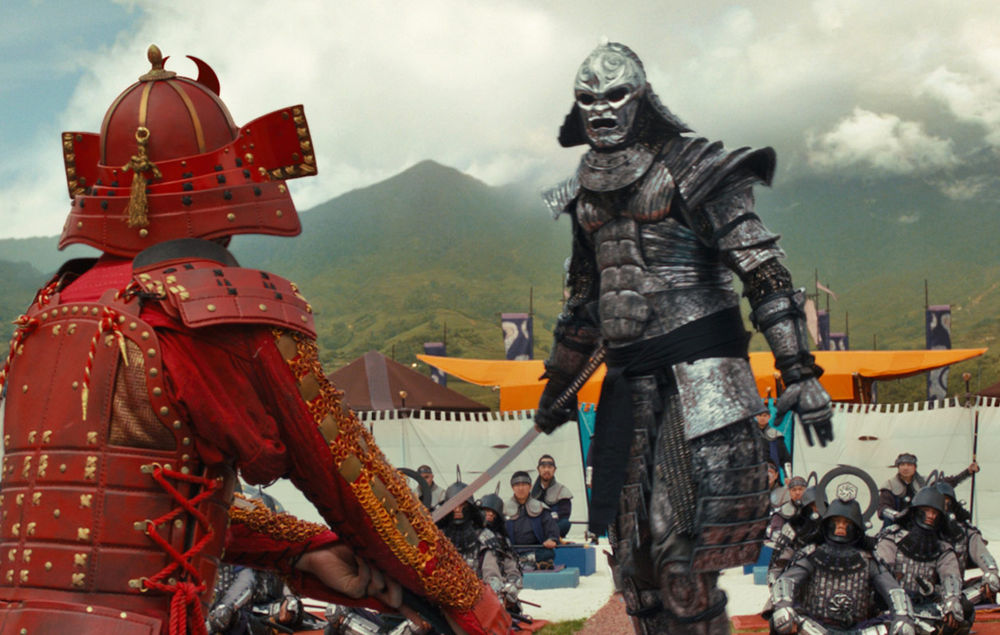 Via 3.bp.blogspot.com
This version of the story has magical beasts, witchcraft, demons, one dragon, giant warriors, and some very bullish provincial wildlife. Some of the monsters (even Kai’s demonic monk foster parents) are pretty much an original blend of East colliding with West and coming out on top. There's also Lord Kira's giant armored champion, and the Ogre that Kai battles when he's sold into captivity.

2. Rinko Kikuchi, aka The Sexy Witch 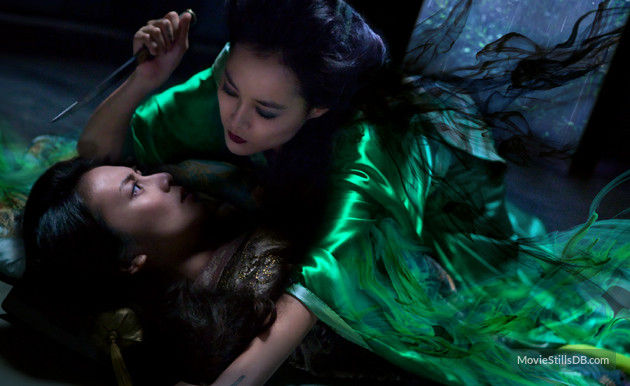 Via moviestillsdb.com
When the story starts, we don't exactly know what she is except she's evil, magical, a shape-shifter and, in human form, has a tasty proclivity for lounging around in a haphazardly tied kimono in various states of disarray. Oh, and harassing the fief's princess while she sleeps.

1. A Keanu with demonic-powers wielding a katana

Let us not forget that Reeves was once the digital messiah of humanity, battled AI robots, and a bonafide action hero who stopped terrorist bombs on buses. Keanu wields that katana with mad skillz and it's effective against magical beasts or enemy samurai. The action here is more than decent and much of that is due to Keanu himself. Plus, his thousand yard stare fits into the Zen bushido mind set so much it looks like he's meditating while slicing flesh.


“47 Ronin” is now showing in major Manila theaters. Share your thoughts on the movie in the Comments Section below.