Filipino is a funny language. To foreign ears, our words can sound a mite too percussive, as the ratatat of the expression “Kakabakaba ka ba?” can show.Other times, our vocabulary can just be outright weird, to the point that expats can only scratch their scalps in bemusement. They say that for every culture, more words are created to describe things that are more manifest in its reality: The Japanese have fifteen words for rice; the Eskimos have ninety-nine for snow.

That being said, are there also realities uniquely Filipino, words that could lead Google Translate to self-destruct? Boot up your Broca’s area and read on as 8List brings you 8 words endemic to our psyches.

Here are 8 Filipino words without English Equivalent! (And once you're done with this list, don't forget to check out Part 2!) 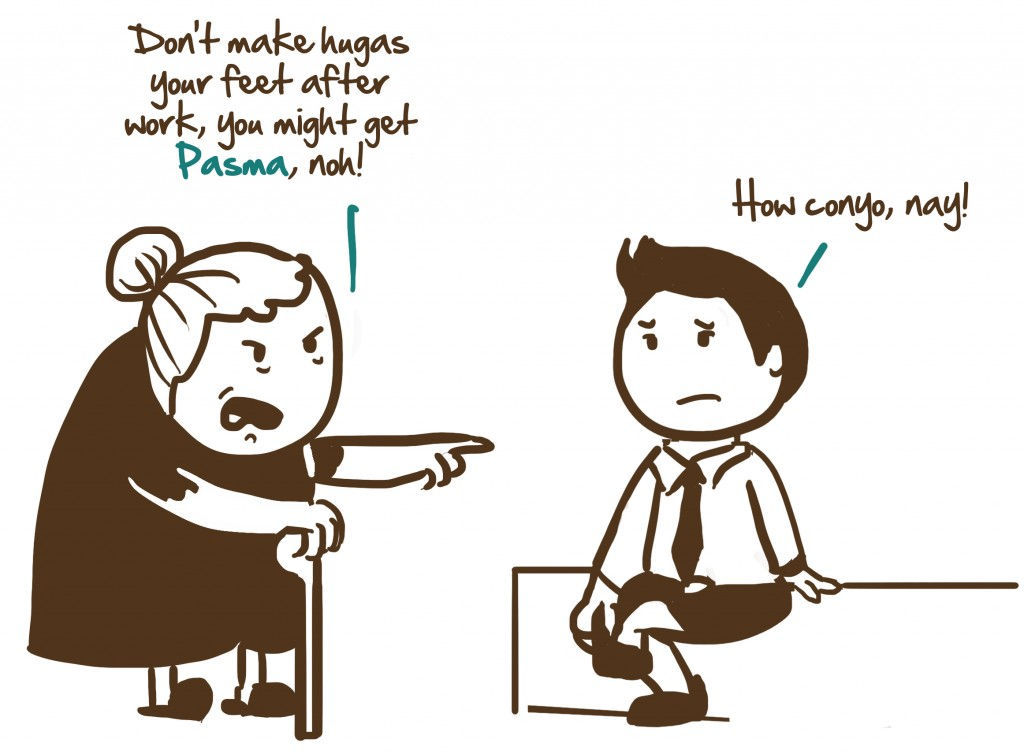 muscular pain experienced upon immediate contact with cold water, after sweating or exposing one’s self to heat

Ah yes, Pinoy pseudo-science at its finest! It’s one of those animist afflictions our lolas warned us about that eventually seeped into our collective brains and became a caveat to athletes and household help alike.

Perhaps its origins can be traced to the eldritch sciences of our ancestors, before the Spanish introduced Western reasoning to our archipelago.

So remember, children: Don’t immediately jump to the pool when you’ve just peeled your socks off. Give those little piggies some chill time. 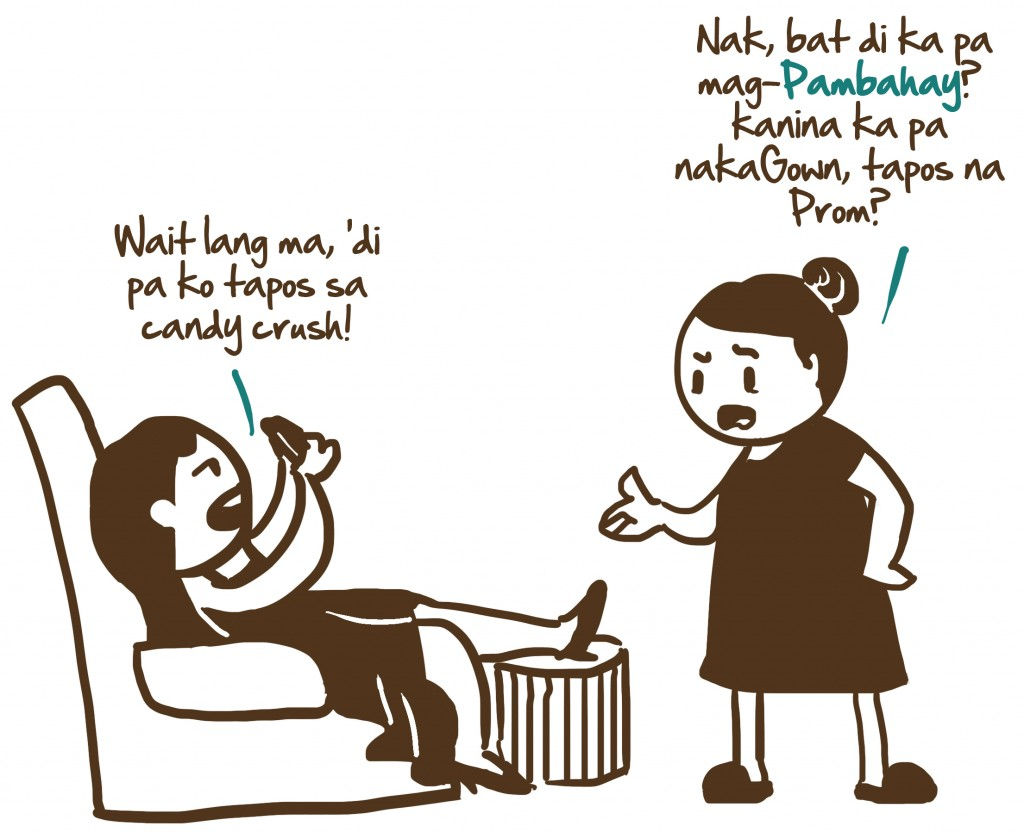 a comfortable set of clothes usually worn within private spaces and avoided during chichi social events, unless you are from Alabang and you go to the mall wearing this

Isn’t it strange that in movies, we see Americans wear this to bed, but a proper term was never coined? ‘Housewear’ does not cut it. Neither do ‘pajamas’ or ‘laundry-day attire’.

Pambahay is something all its own, a word purposed to more tropical climes and societies steeped on modesty.

Quick! If the Baraong Tagalog becomes out-of-fashion, somebody better elect this as Pambansang Kasuotan! 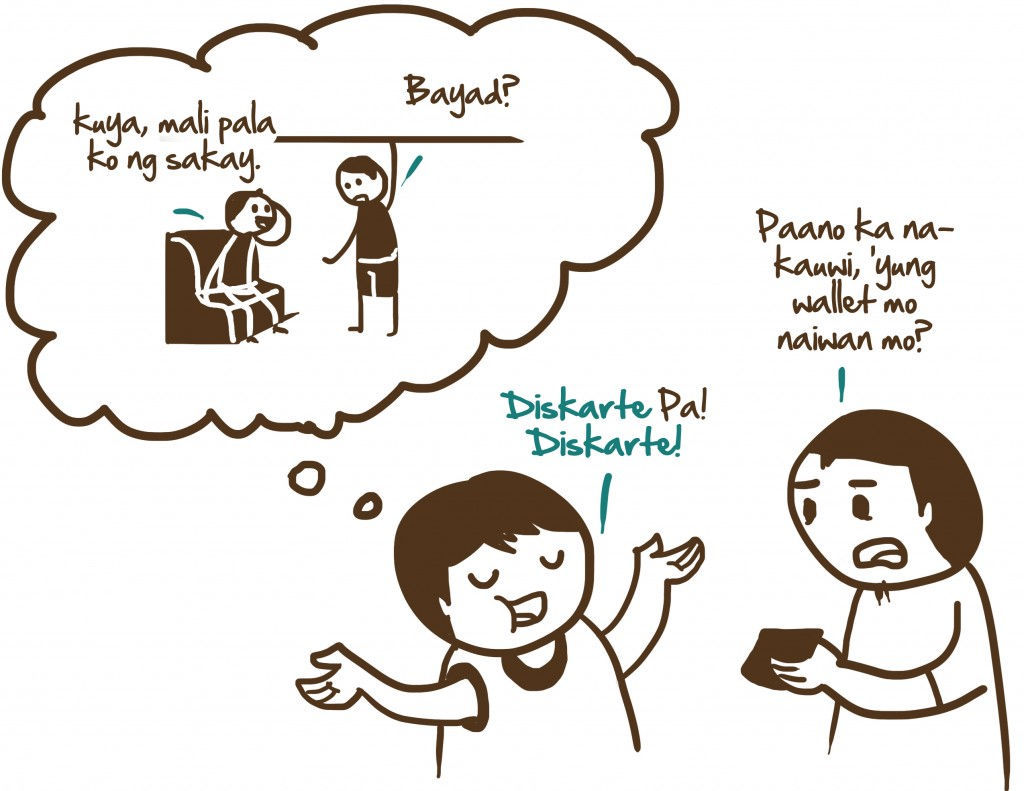 the act of being discreetly resourceful

What is often the buzzword of Tito, Vic and Joey-type con artists has also become our people’s catch-all term for band-aid solutions.

Think of it as the awesome things the Mentos guy did after he popped some Mentos.

But hey, mind you: ‘Tis a handy word to use when your idea of problem-solving requires a little bit of larceny. 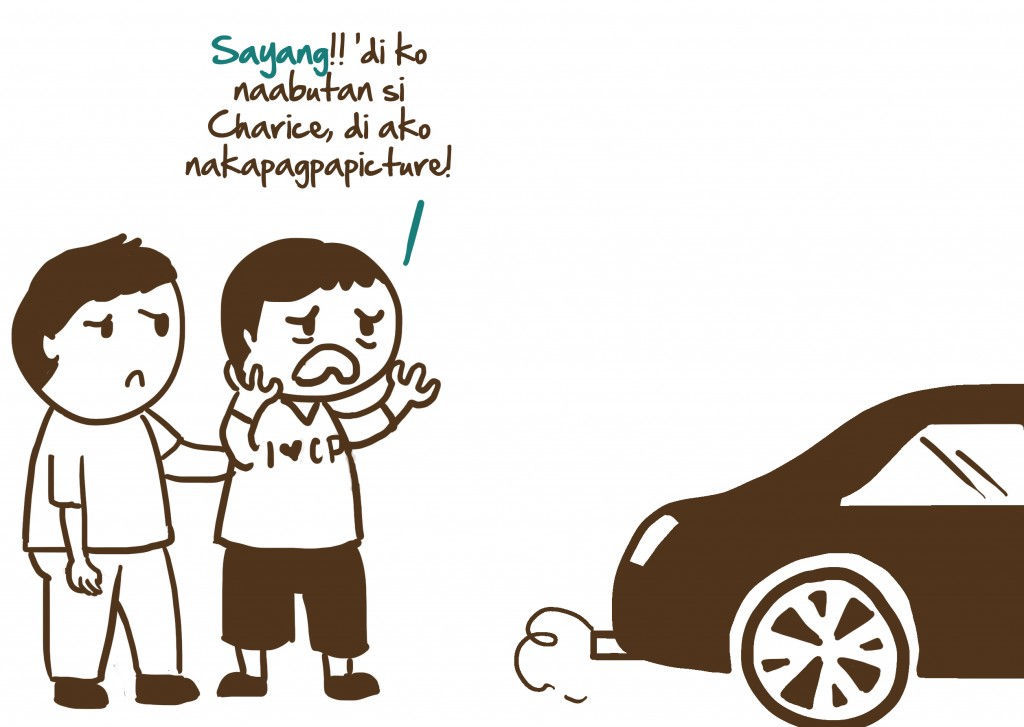 an interjection that connotes frustration over a near-miss

What the Americans use a sentence to describe, we Filipinos can do in one word.

It’s that all-too-familiar, balls-imploding reaction to something almost achieved, like a slowly spinning basketball that slid out of the ring after an eternity of suspense.

This is often assisted by a caveman head scratch and that musical stinger that goes wek-wek-wek. 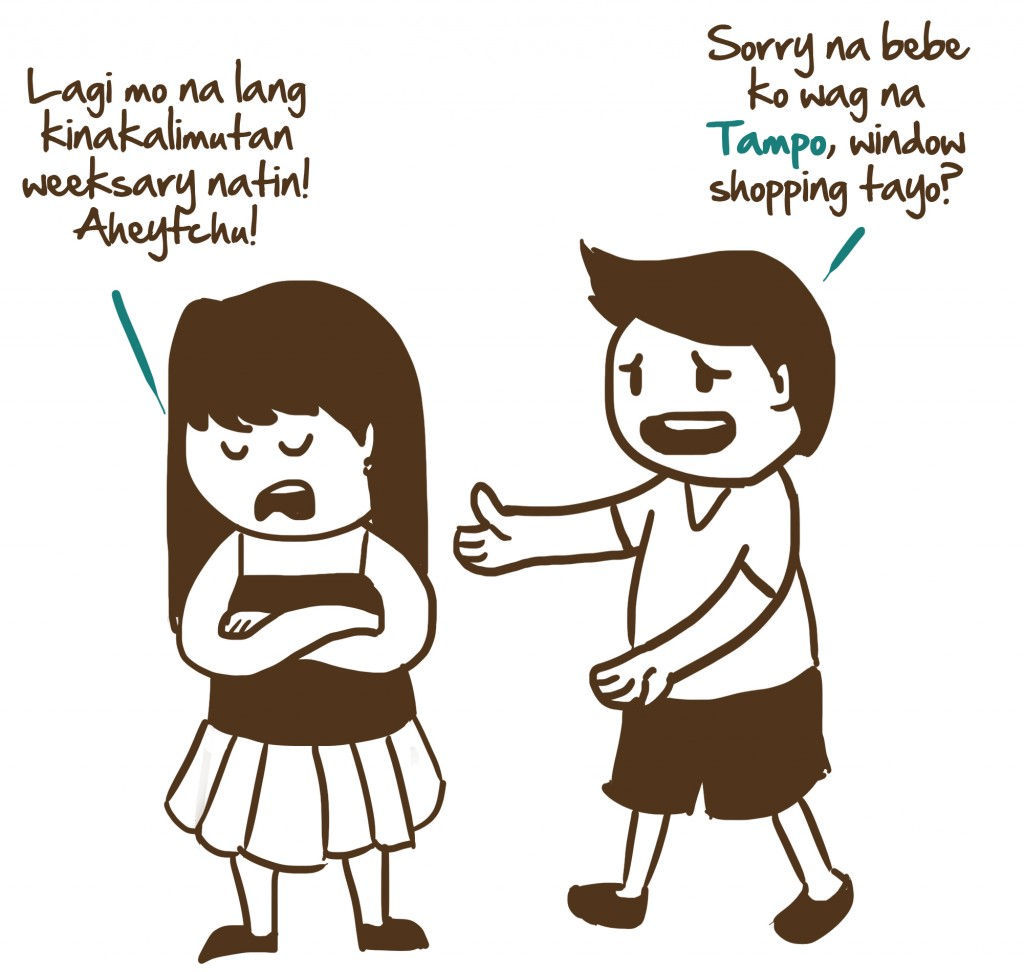 Tampo is perhaps the girliest behavior Pinoys are prone to. This can be physically manifested through pouted lips and crossed arms, or through treating the offending party as invisible until he kneels down and begs for forgiveness. This is the kind of thing that actress Toni Gonzaga has turned into an art form. 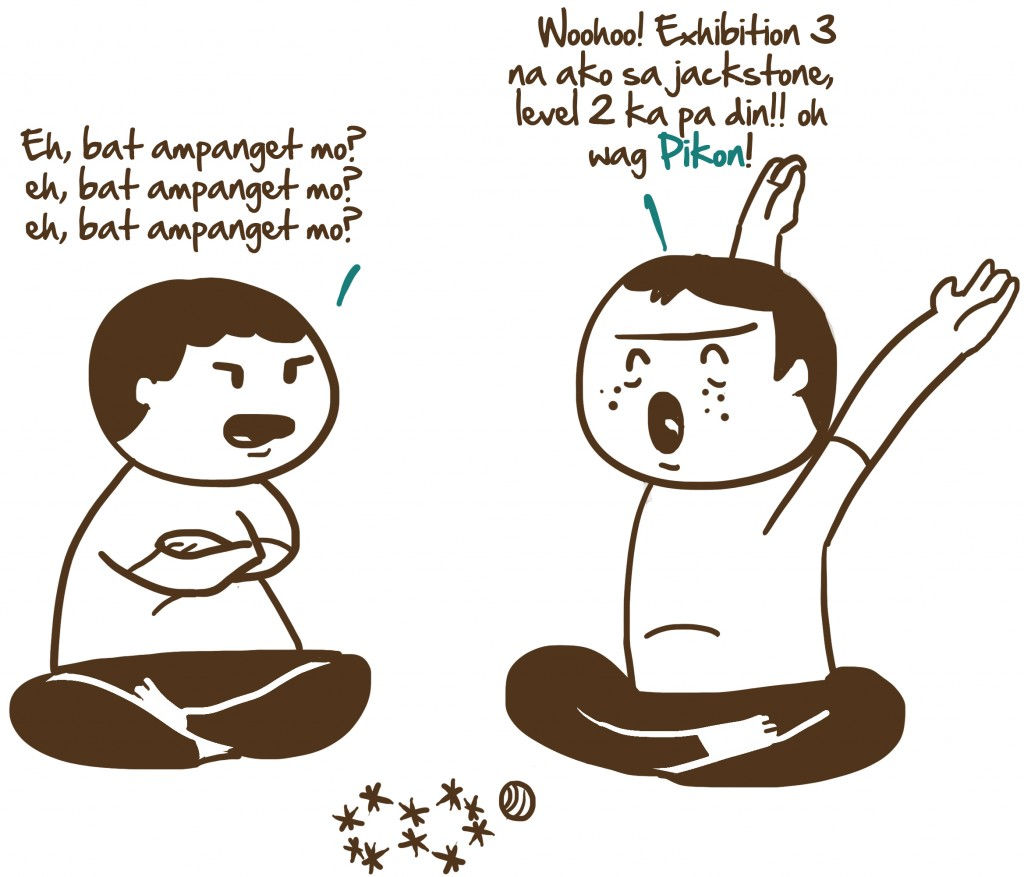 Badly put, it’s about being angry at the concept of you being the recipient of vengeance. Pinoys are good at offending, but when the tables are turned on them, they often are spoiled sports.

Pikon’s the word that describes that fuming. 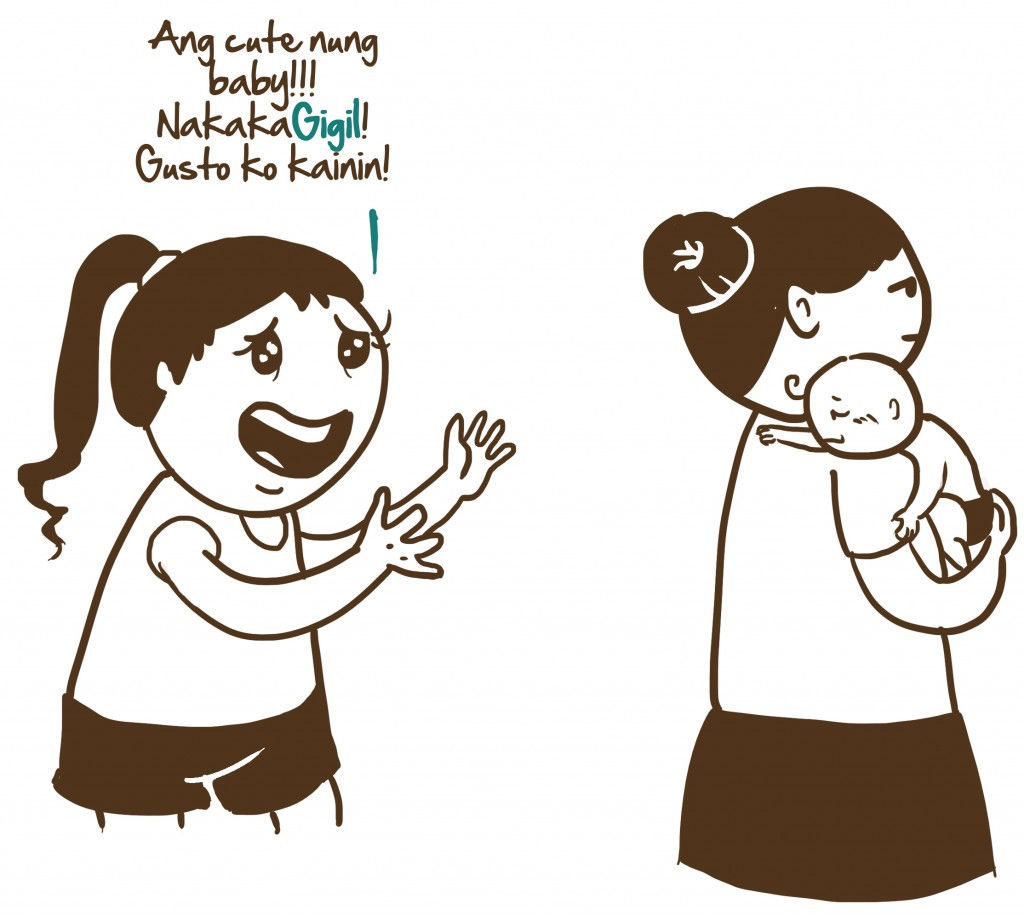 an extreme urge to squeeze someone or something,usually brought about by a cute or irritating object

The English expression that closely encapsulates this feeling is: “You’re so adorable, I want to eat you.” Close but no cigar.

Gigil means what it sounds like. It’s dual-purpose too: You can either feel gigil at the Pomeranian that dressed up as Wonder Woman at the pet show, or at your officemate who spilled milk tea on your new iPad. 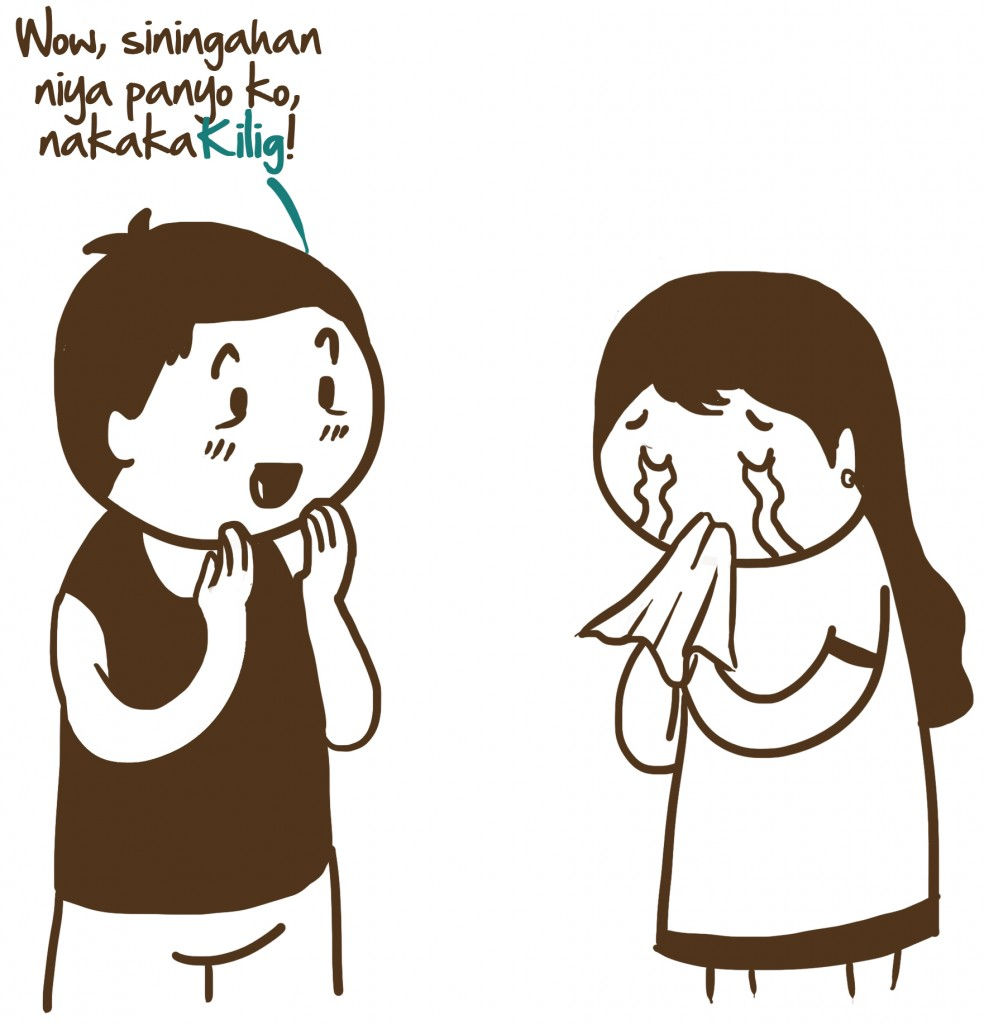 a feeling of being intoxicated by the idea of love, whether subjectively experienced or through mirror neurons

If snow is to Eskimos, rice to the Japanese,it looks like it’s emotions for Filipinos. If you’ve paid enough attention to the preceeding entries, our mother tongue has heaps of words for emotions—all twenty-one flavors of it, not counting the elusive umami parallel.

We Filipinos are people of emotions, of gigantic hearts!

Consider: The English word ‘giddy’ does not hold a candle to the word kilig, that bioelectric jolt of love when we see lovers sealing a million-peso kiss.

Only Pinoys can feel that and eventually invent a word for it.

Do you know of other Filipino words that don't translate to English? Share with other word lovers in the Comments Section.

Related: 8 Foreigners Who Will Wow You With Their Tagalog