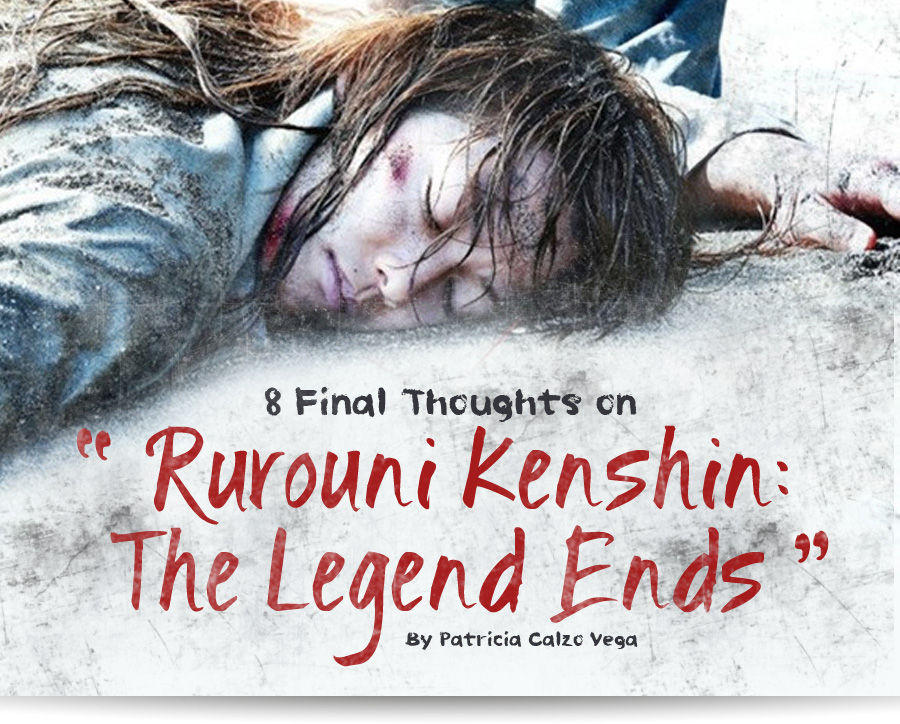 [dropcap letter="A"] successful adaptation is no mean thing. Generation loss is always a possibility—this is the risk one takes when retrofitting narratives to a different storytelling medium—and there is the added matter of retaining old faithfuls while welcoming new recruits. Nostalgia sets expectations impossibly high, but the mere thought of lowering standards to more manageable levels seems a disservice to the legion of individuals who propelled the source material to popularity.
And yet, the Rurouni Kenshin live action trilogy has been breaking box office records and reaping critical acclaim since the first installment premiered in 2012. Yes, there will be quibbling about streamlined plots and diminished character involvement, but this is par for the course for any fandom, which thrives—in the words of Henry Jenkins, the granddaddy of participatory culture—on fascination and frustration. ‘Rurouni Kenshin: The Legend Ends’ generates more of the former, and demands that we take off our nostalgia-tinted glasses and accept it for what it is: an interpretation that elevates the source material by respecting the maturity of its intended audience.
TL;DR? Let’s just call it legendary.

Via demonsteration.tumblr.com
This could have been a simple victory lap for director Keishi Otomo, lead actor Takeru Satoh, and the rest of the cast and crew. They could have just stuck with the winning formula of a high impact opening sustained by action-packed set pieces. Instead Otomo takes a chance by starting slow and maintaining a more somber mood throughout the film; flashbacks to the previous installments make this tonal shift more apparent, while helping new viewers get up to speed with the story so far. Mission accomplished: the crowd at the press screening had a more measured response, even when the sword fights got really exciting.
(And I may have the benefit of hindsight, but the scenes' color palette seemed to reflect Kenshin's state of mind: blues and greys dominate his early scenes of uncertainty and contemplation, hopeful greens and natural light frame his epiphany, the fiery oranges and blacks evoke the danger and destruction unleashed by Makoto Shishio (Tatsuya Fujiwara).

Via Warner Bros. Pictures
Rurouni Kenshin: Kyoto Inferno's cliffhanger introduces viewers to a mysterious swordsman (Masaharu Fukuyama) who, trailers will show, plays an instrumental role in Kenshin's training. Known as Seijuurou Hiko to fans, he is only identified in the movie as Master--he who taught Kenshin Hiten Mitsurugi sword fighting all those years ago, and whom Kenshin now entreats to share the famed final techniques.
Equal parts spiritual retreat and training montage, these scenes show that being a swordsman requires strength of body, mind,and spirit. Hiko questions Kenshin's insistence on bearing responsibility by himself, his uneasy alliance with government (which somewhat contradicts the solitary way of the Hiten Mitsurugi master), and his conflicted interpretation of respect for human life.
And yes, the final techniques are executed in battle. Count the strikes in succeeding fight scenes to identify the Kuzu Ryu Sen, and let out a victorious shout when Kenshin finally name checks a move: the much awaited Ama Kakeru Ryu no Hirameki.

Via demonsteration.tumblr.com
But while Kenshin inches slowly towards the future, he continues to encounter fighters who are driven by their inability to leave their past behind. Aoshi Shinomori (Yusuke Iseya) is driven by the need to regain the honor he lost when the Oniwabanshu fell in battle by defeating the Hitokiri Battousai, while Sojiro Seta (Ryunosuke Kamiki)’s speed and precision is informed by a traumatic past that stripped him of empathy and imbued him with the belief that only the strong will survive. Their battles with Kenshin force them to face their demons and make decisions about their future.

Via demonsteration.tumblr.com
The women of Rurouni Kenshin are mostly strong-willed and capable in their own right, but chopping the Kyoto arc into two movies significantly reduced their participation in “Rurouni Kenshin: The Legend Ends” into a source of inspiration and support for the men in their lives.
In some cases, characters are given a chance to shine: Yumi (Maryjun Takahashi) finally gets to do something other than hang on to Shishio's arm, and Yu Aoi chews the scenery in Megumi's brief but impactful interaction with Kenshin before the denouement.
Pro-tip: don't talk to Misao fans about Misao (Tao Tsuchiya). There will be feels, and rightly so. Expediency has done away with the Oniwabanshu subplot and shortcuts were made to resolve their leadership crisis, at the expense of character development. On the other hand, hero worship is never a solid foundation for any sort of relationship--the movie just emphasizes how unsettling this can be.
And then there's Kaoru. The previous movie saw the character take a more proactive response to the Kyoto fire, so it was a shame to see her fade into the background a bit. While absence may make Kenshin's heart grow more resolute --mileage may vary depending on one's shipper inclinations, since mysterious flashback lady makes another pivotal appearance--much of the chemistry between Emi Takei and Takeru Satoh is derived from their shared screentime and lessening their scenes together slightly dims the potential of their pairing.

Via Warner Bros. Pictures
Leaving romantic notions aside, the character that expressed the most concern for Kenshin’s welfare was Sanosuke Sagara. That Sano is a crowd favorite and audience avatar--especially among new viewers--is a testament to Aoki Munetaka's superb embodiment of the character. Astig, he says, and we agree. His cheerful attitude and never-say-die stance in the face of overwhelming odds resonates with us, because another thing Sano has is #puso.

Via Warner Bros. Pictures
Fans gasped when the official trailer showed Kenshin being sentenced to death for the war crimes he committed as Hitokiri Battousai. Addressing the metanarrative surrounding Kenshin’s past and present heroics—power struggles, dirty politics, and underhanded cover-ups—was a risky move for Otomo. Hajime Saitoh (Yosuke Eguchi) and his antiestablishment tendencies notwithstanding, the original series rarely touched on this political aspect, focusing instead on Kenshin’s atonement, redemption, and badass fighting skills. Nuanced explorations of ethical grey areas are not a particular specialty of shonen fighting manga, so adding this dimension to Rurouni Kenshin’s Kyoto arc opens it to more mature discourse.

Via Warner Bros. Pictures
This movie runs for approximately two and a half hours, and the last thirty or so minutes are devoted to the final encounter with Shishio. There are pyrotechnics! Tag teams! Unexpected comic relief! More importantly, Kenshin realizes that keeping the peace in Meiji society is not a solitary task. What’s not to love?

Via URL
For legends, immortality is not their preferred reward, but fading into the obscurity of everyday life. We only get a very brief glimpse of that before the movie abruptly ends; after all, how peaceful can life with a notorious former assassin ever be? But the potential for happiness is there, and the slim possibility of a sequel—that’s a good enough ending for me.