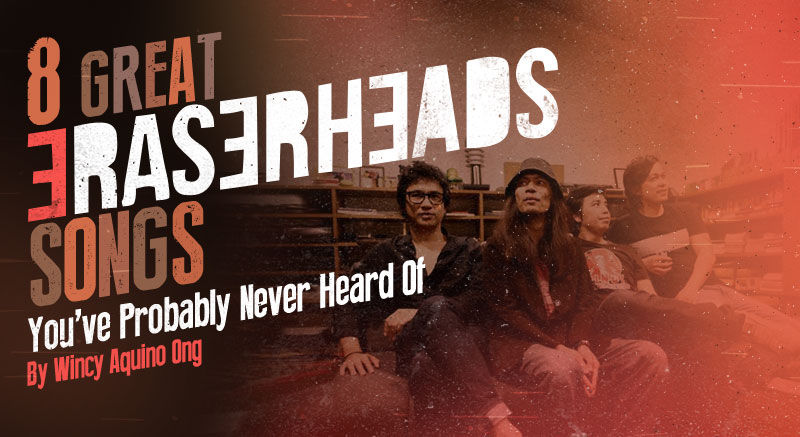 And just like that, Eraserheadsmania is upon us again. With their slight return to the studio, the ‘90s foursome have released two new songs, “1995” and “Sabado”, as part of a special issue of Esquire Philippines.
Of course, true fans know that there’s more to them than “Ang Huling El Bimbo”. That overplayed song, ladies and germs, is only the fingernail of the iceberg.
So with much nostalgia, I pored over their 170-plus song catalogue. What I’ve found out is there are treasures untold that casual and newbie fans should listen to.
A deeper look into what’s probably the greatest and most storied discography in OPM history (one that could unseat the Apo Hiking Society’s) reveals a lot about the Eraserheads’ creative spirit. They had weird songs, spoken word album fillers, experimental electronica numbers and a whole lot more.
But aside from this, I found eight infectious songs that slipped past everyone’s radar—eight songs that should warrant more plays.

The Eraserheads were touted more as songsmiths than musicians who could funk up a room. But this little throwaway jam shows the ‘Heads in improvisation mode, where they turn the craziness up to eleven.
Part of a rare compilation album called 1896: Ang Pagsilang, this is the four of them goofing off yet again on wordplay (perhaps by way of Marcus Adoro), but this time, in Castilian tongues. Forgettable fun, but nonetheless, pure fun.

Say what you will of the Eraserheads final album, the lukewarm Carbon Stereoxide, but still, there were a few snatches of genius here and there, like the loud-quiet-loud “Hula”.
A taste-test to the sounds Buendia would later on embrace in The Mongols and Pupil, this song gleams in the ocean of bad music at that time, namely Limp Bizkit and the whole gamut of kupaw bands.
Also, “Hula” shows what the Eraserheads were mad about in those days: guitar feedback.

Though it was Buendia who got credit for most of their songs, there was always the hardworking Raimund Marasigan who did magic from the backseat.
This spoken-word Motown number forecasts all the good things Marasigan would do in Sandwich and his future collection of side bands: his absurdist humor and his penchant for studio tricks.
What’s memorable is it’s that rare moment when Buendia and Marasigan share the mic. “Matanda na ang pusa ko / Sa kahihintay / Sa linya ng telepono” is that one line that’s all together non-sense and so damn relatable.

Zany. There’s no better word to describe that opening guitar riff. It’s like a soundtrack for a gonzo Japanese game show.
In its first stanza, like a bat out of hell, Buendia startles everyone with his snarling vocals, “Pumikit lang nang sandali / Abril na nung ako’y magising”. The other lines that follow seem like words picked from a hat, but they all zing with rapier-like patama humor.
This is perhaps the best opening song they’ve come up with: A kick in the balls, more effective than overpriced coffee.

Unlike their contemporaries, the Eraserheads were truly a four-headed monster; their sum was greater than the parts. And this simple song here, from the overlooked Natin 99 album, is a crowning moment of awesome for Buddy Zabala, wherein he does singing duties.
Simple, sweet, yet new (without the time-honoured voice of Buendia), the song reminds you of the band’s never-ending wells of melody.

For me, at least, this is the Eraserheads’ attempt at making a Disney song. But instead of Belle dreaming of escaping her provincial life or Mulan staring at her reflection, this is Franny Wei (the protagonist of the Fruitcake children’s book) telling the infinitesimal night sky all her secrets and dreams—quite a mesmeric image.
Orchestral accompaniments attest that the Heads were more than your friendly neighborhood garage band. These guys were pushing the envelope while the rest of the Philippines still insisted on unimaginative G-D-Em-C chord progressions.

Unbeknownst to many, the Eraserheads created the ultimate beta-male anthem of the ‘90s, earlier than Weezer could release The Blue Album.
This secret gem from their debut, which marries Aztec Camera with the Motown beats of The Jackson Five, speaks volumes of what made their songs irresistible: They were about me and you, the guys who couldn’t be bugged with macho stuff.
Dorks, nerds and other Napoleon Dynamite types could only thump their chests when Buendia quips: “And I ain’t no stupid fighter / I go for flower power/ I’ve been running every race / Just to save my face”.
Besides this, if you pay attention to the bassline, this song confirms that Buddy Zabala is the Manny Pacquiao of bass playing. Boy, does that guy ever run out of tricks? A demon on four strings!

Hypnotic! A music box intro gives way to three minutes of tweelectronica. With slice-of-life details sprinkled here and there, Buendia’s lyrics read like a tour diary of their first concert in the USA. Further listens make it larger than that though: It becomes the sentiment of every Filipino eking out a living abroad and missing the charms of home.
The Heads’ signature Taglish is best used with a chorus that goes: “Umuwi na tayo / Dahil wala ng sense ang ating mundo”.
“Balikbayan Box” strikes such a chord that director Quark Henares and screenwriter Diego Castillo used this as an exit song for their film Rakenrol.