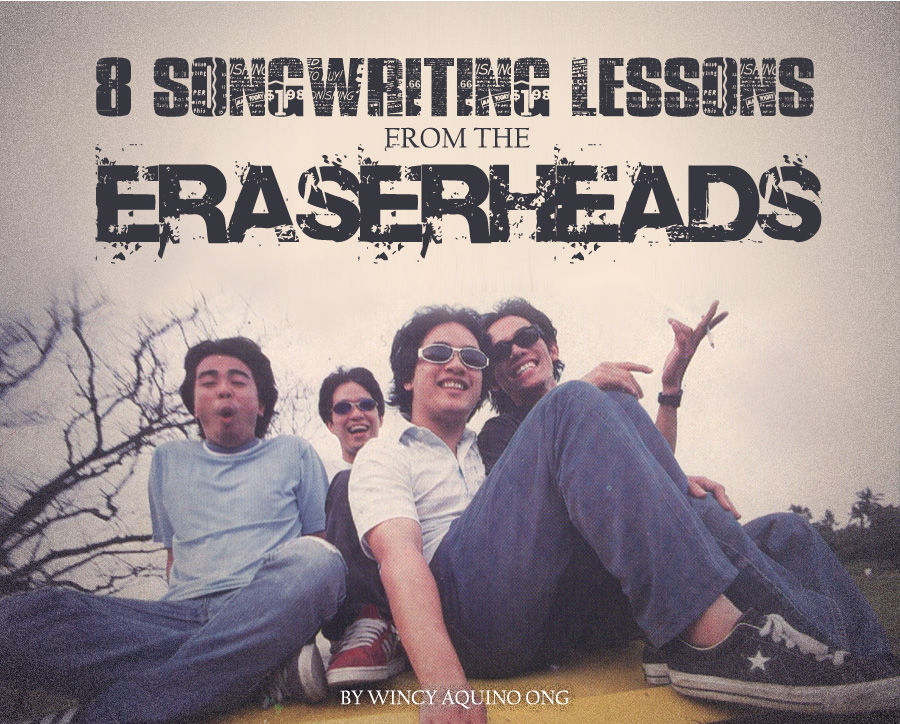 Is there a better way to learn songwriting than to study the great ones? I think not.
I’ve had conversations with celebrated songwriters like Jazz Nicolas (of the Itchyworms!) and Ebe Dancel (of Sugarfree), and these nuggets of wisdom keep on popping up. And what do you know? These were lessons learned from listening to the Eraserheads.
So with that said, here are 8 valuable lessons on the craft of writing a pop song, straight from the Eraser-skulls of Messrs. Adoro, Buendia, Marasigan and Zabala. 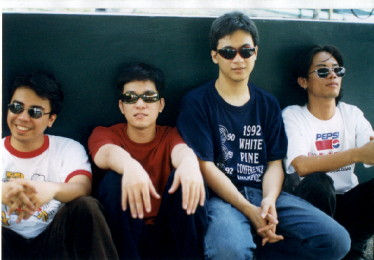 Via schizo-archives.com
One can literally live inside an Eraserheads song—it’s like a haunted house full of goodies. I once listened to the Sticker Happy with some expensive headphones, and lo and behold!, sounds that slipped past my teenage ears appeared: a secret synth melody here, some backmasked vocals there, hiding in the mix.
The Eraserheads knew that a song with a great chord progression, a great melody, was only one-fifths the battle. Like a Christmas tree without bells and balls.
So, turn your song haunted. Fill it with Easter eggs. Complicate things. Add sound effects (“Overdrive”). Change time signatures (“Hey Jay”). Speak the lyrics (“Kaliwete”).

Via metrolyrics.com
Speaking of arrangements…
It’s true: When it comes to arranging, a great pop song is a dance between contrasting ideas. A round robin of yins and yangs, of ebonies and ivories.
For instance, take “Smells Like Teen Spirit”. It starts out loud, and then softens to a bass line. Then, it erupts once again when the chorus comes. Loud-quiet-loud. You follow?
And that’s the secret. Art, like our heartbeats, comes alive when it goes through peaks and valleys. It dies when it’s a flat line.
The Eraserheads knew this when it came to arranging their songs. (The Itchyworms! took down notes and made party tricks out of it.)
So there, it’s no secret any longer.
From quiet, go loud (“Easy Ka Lang”). From thin, go thick (“Hula”). From slow, go fast (“Run Barbi Run”). From acoustic, go electric (“Sabado”). From Tagalog, go English (“Futuristic").

Via ph.celebrity.yahoo.com
Confession: It peeves me when boffins say, on why the Eraserheads clicked: Because they had songs you could easily play off the Song Hits.
This may apply to “Pare Ko”, but try keeping up with the chord changes of “Ligaya” and I bet you’ll go cross-eyed. Buendia, a fan of David Bowie’s Ziggy Stardust era, knew his chord chart like the back of his hand.
Don’t subscribe to the idea that simplicity is the secret to all good songs. If all songs were simple, we’d all be jamming to nursery rhymes. Great music is a balance between the basic and the complex.
It’s like a Zen koan: Go beyond being a beginner. Graduate to stranger chord progressions, stranger beats. Then go back to being a beginner again. That’s the Eraserheads way.

Via schizo-archives.com
Not so much as thump your chest like Bonifacio, and ooze Pinoy pride out of every orifice in your body, no. (Please God, no.) Being unapologetically rah-rah about the Philippines may come off as charming at first, but eventually, like those mooks on Facebook, you will look silly.
Yes, folks, the Eraserheads were experts in keeping their passions in check. (Last I reviewed their discography, there was not one nationalistic song.)
They didn’t dress up as die-hard "Pilipino Ako" types. Hell, they looked like dormers in ironic T-shirts—more like slackers than an all-important Filipino band.
But hey, as it is with all types of writing, one has to at least share to his audience what’s it like where he’s from.
Stephen King set his stories in his homeland Maine, an otherwise boring fishing town. Native New Yorker Stan Lee made Spider-Man a resident in Forest Hills, Dr. Strange in Greenwich Village. The band Blur went unapologetically British and sang about life in Colchester.
The Eraserheads did so too with life in the Philippines. Without much flag-raising, they painted a portrait of everyday life in Manila. They peppered their songs with isaw, tansans, beepers, and styrosnow—details only a Filipino can nod his head to.

Via youtube.com
Ely Buendia, a film major, is no stranger to the three-act story structure. Most of his earlier songs like “Tindahan Ni Aling Nena”, “Ang Huling El Bimbo”, and “Poorman’s Grave” read like mini-novels, similar to Paul McCartney’s “Eleanor Rigby” and “Maxwell’s Silver Hammer”.
Sure, now that we’re in the Hipster Age, story songs would sound like silly fare, like music from AM radio.
Recently, I read lyrics written by a Pinoy indie band. The words sounded so cool—but they didn’t make a lick of sense to me. Like poetry done on refrigerator magnets. They were just random, cool-sounding words. They meant nothing.
I’m not saying that all should hark back to Rupert Holmes’s “Terminal” and write narratives. But by all means, say something with your words.
Throw abstraction out of the window.
Narrate what happened to you today. Share your opinion about the pawikan. For God’s sake, just tell us a story. 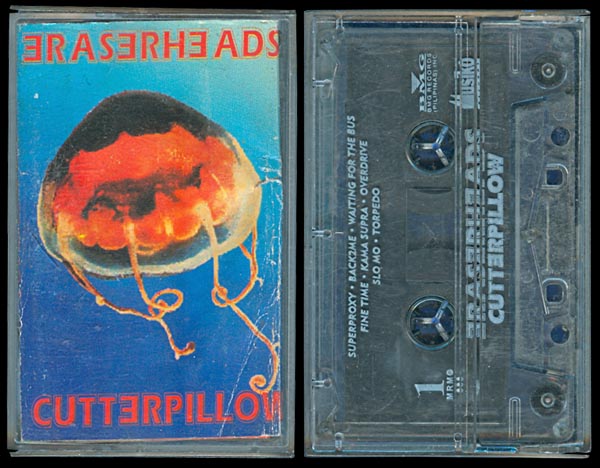 Via symbianize.com
As most Pinoy lyric writers are inclined to (as well as thinkers of teleserye titles), we always get lost in pronouns, prepositions, and other non-tangible words.
Dahil May Isang Ikaw. Kahit Isang Saglit. Habang May Buhay.
Doesn’t stick that well to the brain, right?
The Eraserheads played it well: They used a lot of nouns.
Common nouns like magasin, alapaap, fruitcake. Proper nouns like Toyang, El Bimbo, and Spolarium. These were words that you could hold in your hands.
Keep your lyrics sensory, visual. The ‘Heads were truly visual people that the track list of the Cutterpillow album had icons of animals in them, instead of words.

Via teammanila.com
Ely Buendia is what happens when you give an advertising copywriter a Stratocaster and a distortion pedal. The same could be said of Raimund, Buddy and Marcus. Man, those four sure could give the dictionary a mutation.
Aside from being craftsmen of melodies, the Eraserheads were masters of wordplay.
From hyperbole (“Ligaya”) to pun (“Kama Supra”), from alliteration (“Ha Ha Ha”) to anaphora (“Game! Tama Na!”), they sure knew how to turn a phrase.
And so should you. Like the spectral ball from that show Ghostwriter, gobble up words. Snack on well-written tweets. Eat poetry.
Who knows? You could come up with the next “El Bimbo”.

Via eraserheadsexperience.blogspot.com
The Eraserheads never painted themselves as supermen. They were dorks with guitars. If we heard them fart in a recording, they’d probably ‘fess up in a second and laugh about it.
Sometimes, in writing a song, all you have to do is come out in your pambahay. Leave all delusions of grandeur with the security guard.
Sometimes, all you have to sing about is that boring field trip to the pencil factory. Or that time your balikbayan box reached full capacity. Or that time nobody noticed your new shirt.
Sometimes (and with much irony), it is when we show our loser selves, that people start to prick up their ears, listen, and see us as rock stars, as heroes even.
Be honest. Tell them how awkward your life is. Embarrass yourself. Once you’ve started blushing, it means you’re on your way to a good song.