The 3-minute trailer reveals a lot of things, such as the fact that...

8. Jamie Foxx is the new Syndrome

Remember "The Incredibles", that 2004 superhero animated feature from Pixar? The main antagonist of that movie was Syndrome, a fanboy who turned evil after rejection by his idol Mr. Incredible. Looks like Jamie Foxx's Electro starts out in a similar way, though in apparently more shallow terms: He lashes out because his hero forgot his name.

Jamie Foxx's entire career is built on his cool image. None of his previous roles, ranging from fast-talking thief or iconic blind musician, are even close to what he is in this movie: an unkempt socially-awkward nerd. 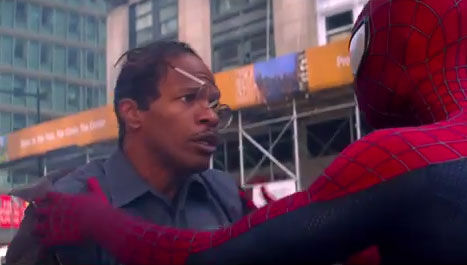 6. Spider-Man is Funny, said Sony to Everyone Else

Comic book Spider-Man cracks jokes, even during life-and-death battles against enemies. The trailer promises more of the same. The fact that Andrew Garfield's sense of humor got a lot of screen time means the film's marketers want you to know that yes, Spider-Man is funny.

Did you see that faceplate clamp down, Iron Man style, to reveal what looks like the horn of the Spider-Man villain Rhino? The comic book version is a super strong and impervious juggernaut because of "mutagenic chemical and radiation treatments." Its movie counterpart howver looks like it depends on powered armor.

4. The Green Goblin Will Appear

The trailer implies that Harry Osborn (of Oscorp, the corporation that figured greatly in the first Spider-Man movie) is not only the Green Goblin (remember that flying villain from the Tobey Maguire Spider-Man movies?), but that he also knows that Peter Parker is Spider-Man.

3. Being Fashionably Late for Movies is the New Trend

As Meredith Woerner of io9 writes, the trailer "is basically the whole opening act for the second Spider-Man movie." Does this mean we can now arrive late for movie screening of The Amazing Spider-Man 2, since we already know what happens at the start?

It's a certainty Aunt May knows that Peter Parker is at least living a double-life. As a teenager, Peter Parker would be careless enough to leave things around the house for someone else to find, maybe a piece of his costume here, and a web shooter there. Parker's "explanations" for the colored laundry and dirty face (see #6) are also a bit lame.

Assuming Spider-Man is fighting more than one enemy (most likely the comic book's Sinister Six), and that one of his foes knows his secret identity (and can thus target Parker's loved ones directly), what can you do next? How can you top such a challenging conflict for the hero in the next installment? The "Amazing Spider-Man 3" may very well become this franchise's "The Dark Knight Rises".

What do you think of the trailer? Are you excited for the movie? Let's discuss in the Comments Section.