In a country like the Philippines, where an overwhelming majority of citizens are Roman Catholic, it's not often one comes across an atheist. More often than not people assume a person is Catholic, or Christian, or to believe in some sort of god, and when a person comes out as a non-believer, they're met with shock, disapproval, or worse.

It's difficult enough being an atheist in a largely Catholic country, but what makes things even more difficult is that so many people have misconceptions about atheists, often fueled by religious leaders themselves. Misconceptions such as... 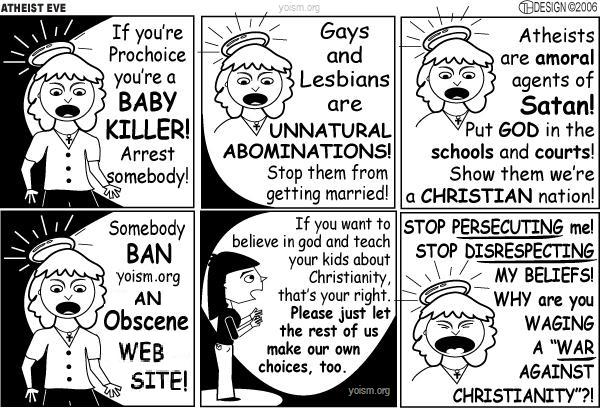 
"Without the 10 commandments, everyone would be killing and raping each other!" is something atheists hear often, and it is simply not true. A lot of atheists are also Secular Humanists, and believe in the value of life, human reason, ethics, and social justice. If the only reason Christians don't kill people is because God told them not to, then Christians are far scarier than atheists, because as soon as they get the go-ahead from God (or someone who claims to speak on behalf of God), they could end up hurting a lot of people.


Atheists can be very vocal about the harms caused by religion, but this does not mean that they hate theists. To criticize a religion, or an institution like the Catholic Church, is not the same as hating the people who follow it. Rather, it is what people do in the name of religion, or in the name of God, (such as protecting rapists that are priests, or denying medical attention to dying children,) that atheists often rage about.

This is especially true of relatives of atheists who feel compelled to "save" them from hell by telling them again and again, in person and on their Facebook wall, that Jesus loves them, that he died for their sins, and that they're going to hell. Atheists don't believe in God, or Satan, or Heaven and Hell, and no amount of extraordinary claims will change the mind of a person who has learned to trust in reason and evidence. All that proselytizing does is show an atheist that he is unaccepted by his family for not believing in something he can't believe in. If you truly want to save an atheist, make an effort to understand them, not change them.


Unfortunately this kind of religious discrimination is very real, with some people thinking that anyone with a religion MUST be better than an atheist. But atheists are normal people, with normal personalities. Some will be good, some will be bad, some will be smart, some less so, and to judge a person as a bad influence simply on the basis of their religious beliefs (or lack thereof) is a horrible example to set for children.

There are, and will probably always be, atheist assholes, just as there are Catholic, Muslim, and Hindu assholes. But not all atheists are the same, and while godless, not everyone is an arrogant asshole. Each atheist is an individual unto him or herself, so before you overgeneralize them as "atheists are this" or "atheists are that," spend a little time to get to know them a little better. While there are things some atheists have in common, there is nothing they ALL have in common, besides a mutual lack of belief in gods. And if you still find ALL the atheists you have met to be disagreeable, then maybe you just haven't been looking at the right place.


Although a lot of atheists are also freethinkers, and a lot of freethinkers identify as atheists, the two are not one and the same. Atheism is simply the absence of a belief in gods. Freethought, on the other hand, is thinking free from the influence of dogma, tradition, and authority, while using reason, logic and empirical evidence as tools for forming opinions. Not all atheists are freethinkers, and not all freethinkers are atheists. You could say that atheism is one of many conclusions, but freethought is a process, and the process of thinking for yourself can lead to different conclusions.

At Filipino Freethinkers, for example, members run the whole gamut of belief systems, from atheists, deists and pantheists, to Muslims, Christians and Wiccans. What matters is not so much what you believe, but the freedom to think and question without fear of offending religious feelings.