8 Ways to Give Feedback to Your Government 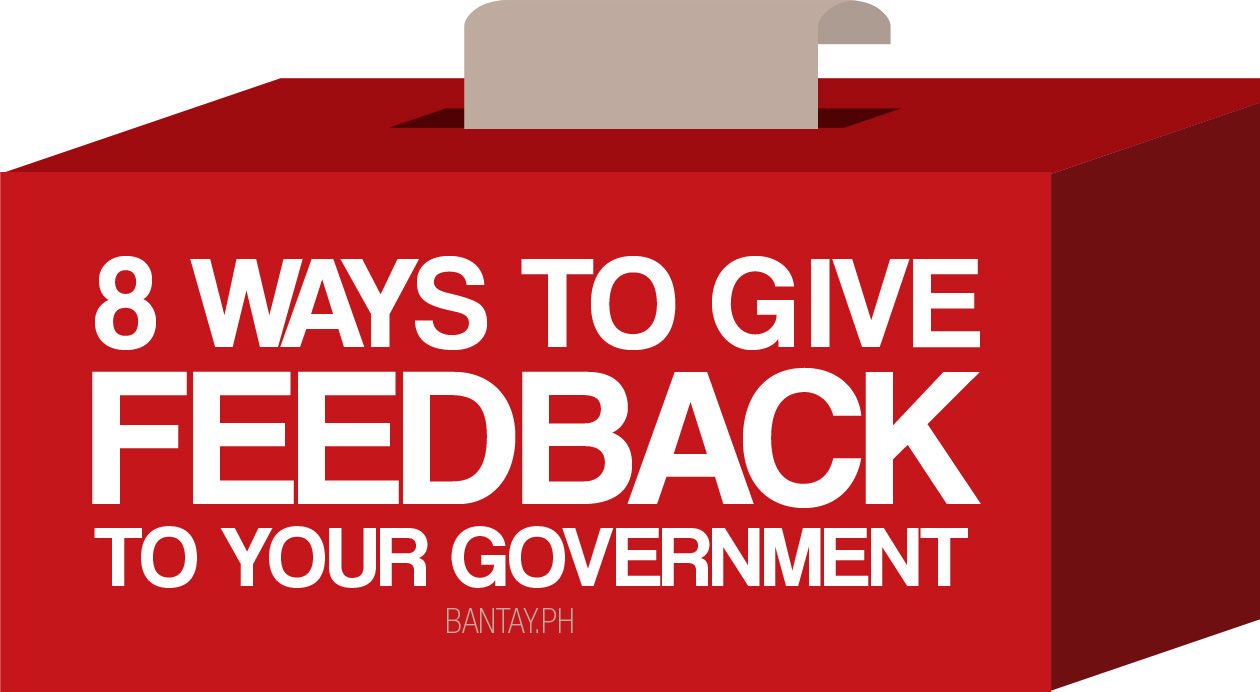 NEWSFLASH: Inefficiency is punishable by law! Yes, I'm talking about the Philippines.
This means anything from long processing time of documents, fixing activity, and discourteous officers is considered illegal under the Anti Red Tape Act (ARTA). The law has been around since 2007 yet nothing has seemed to change. Implementation is key and citizens can directly impact this by something so surprisingly simple: feedback.
We at Bantay.ph are firm believers of the feedback loop and have tried and tested some of the feedback channels that have been set up by our government and found out which ones are most effective.

Via news.harvard.edu
There are proper government hotlines (as in with operators in headsets), and then there are those ad-hoc government hotlines (as in a phone, a SIM card, and an already overworked employee assigned to it).
One of the proper hotlines that we have, the Contact Center ng Bayan, was set up a little over a year ago to address the gaps in ARTA implementation and has had its fair share of success stories. Citizens called, and yes, government answered.
Results range from disbursement of SSS checks after waiting for months, re-assignment of security guards involved in fixing activity, a renovated comfort room, and placement of special lanes for senior citizens and PWDs.

The best way to do it is to check how tech savvy the office in question is—because these are also the offices that will most likely respond to web form submissions.
Personally, I have tried the web forms of the Makati City Hall and the PNP but to no avail. However, I found recently that Twitter superstar MMDA has quite an efficient web form system that works!
Complaints from crowded sidewalks to traffic-causing U-Turn slots will be attended to even if it's just to say that actually your suggestion is only favorable to you and not the majority of the public.

This year, our student volunteers wrote recommendation letters to the heads of the government offices they monitored for ARTA compliance. Out of the seven offices we sent letters to, only four replied. Not all replied within the 10-day deadline, but after follow-up calls we finally got a response, and then some!
They responded saying that all the recommendations were followed and much to our surprise, when we went to check ourselves, they did pull through!

Warning: This can be the most frustrating endeavor of your working day.
As our Project Coordinator describes, "it's counterproductive—some offices pass you around from one line to another... It's also disappointing when they don't keep their word and you'll have to call again... Some offices are efficient and do what they say they'll do but some don't even bother... They don't answer the phones or phone lines are always busy."
Also, they will most likely just tell you to email or fax them your complaint—at the very least though you'll get an email address or fax number that works. And calling is by far the best way to follow up. And you'll need to follow up.

4. The Public Assistance and Complaints Desk (PACD) or the Help Desk [/buffer]

Citizens can give feedback right away and discuss issues face to face with help desk personnel.
By law, every office should have a help desk manned by a knowledgeable employee that can give information about service procedures and feedback mechanisms.
But what if the person in the help desk is not helpful and is actually the person you want to complain about? Well, like all the other employees there, they should be wearing their IDs so you can get his/her name and file a complaint using any of the other seven ways in this list.

This is something we find very useful as a Civil Society Organization (CSO). It's one thing to have a success story but to keep the improvements consistent is another thing.
Building partnerships with government through dialogue creates a friendly atmosphere wherein people can really work together. Antagonizing government will only make it more difficult. Presenting yourself as a partner rather than a critic creates a more efficient feedback loop and therefore the capacity to affect bigger change.
Word of caution: sometimes these meetings are done for publicity purposes so make sure you take your bullshit detector with you.

It helps if you know someone that believes in your cause. Most of the time, the person sitting next to the phone taking calls isn't the most pro-active employee in the office. Find the young idealistic one and get him or her to champion your cause.
It also helps if you partner with institutions like schools, companies, NGOs, and churches, when you write letters or make a call to create more gravitas in your case. In other words, name dropping is useful when you want to keep government on their toes.

Making things public raises the stakes. More publicity means more accountability. People behave differently when they know people are watching. Social media best embodies that principle and when used to give feedback, it could be very effective.
One successful social media campaign was the #PDAFKalampag movement which got senators to respond to issues straight away. The tricky part, however, is sustaining the interest and continuous monitoring.
Social Media has proved to be a very effective tool in mobilization for disaster and for rallies but we're only scratching the surface. If used wisely, with tact, and with sincere intention, this could probably be the best means of giving feedback and getting results. We were once the social media capital of the world, after all.
Other than voting, giving feedback is one concrete way we can participate in nation building. This is one way of telling our government officials “hey, we’re watching you.” If we are indeed the bosses of this country, how have we tracked our employees performance? Giving and receiving constructive feedback affects behavior and can therefore affect great change.
Not sure how to get in touch with your local government? Check out the office'scitizen's charter—a document that every government office should have that contains information of all procedures, costs, people in charge, and feedback mechanisms. Post your thoughts and suggestions in the Comments Section.