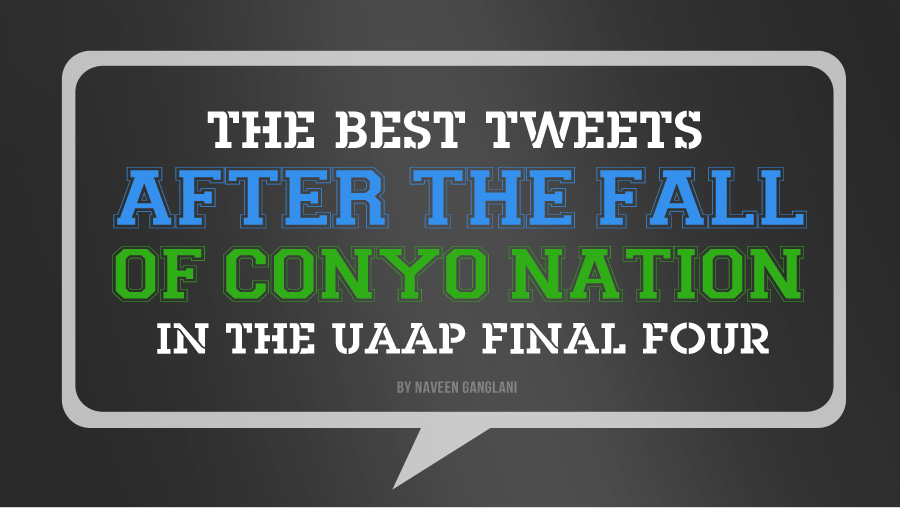 [dropcap letter="I"]n case you guys have been living under a rock, yesterday saw two exciting UAAP Final Four games that, unfortunately for two certain schools, ended in heartbreak.
La Salle and Ateneo, called by some as the “Conyo Nation,” saw their basketball teams fall at the hands of FEU and NU, respectively, despite being favorites to come away with wins.
After the match, parody, and fan accounts of both universities took to social media to let out their feelings, and it formed an unexpected but hilarious alliance between the two rivals. Here are some of the best tweets:

True love is like the championship kailangan ilet go when she's happier with someone else
— GreenfansPH (@GreenfansPH) October 2, 2014

It was a tough day for the Green Archers to see their reign as defending UAAP champions come to an end, but as Idina Menzel said, sometimes you just have to “let it go… let it go.”

This Ateneo-La Salle love reminds me of the last X-Men movie: "All those years we wasted fighting each other... to have a few of them back"
— Miguel Lizada (@mlizada) October 1, 2014

Wouldn’t it be awesome if Marvel made a film about DLSU and Ateneo as the X-Men? Who would Kiefer Ravena play? How about Jeron Teng? What kind of powers would they have?
Speaking of Teng and Ravena…

together we stand, united we fall pic.twitter.com/dEYz59LV85
— The Blue Eagle (@ateneomofo) October 1, 2014

All throughout the UAAP season, La Salle and Ateneo stood at the higher echelon of the league standings. Then in one day, it was all gone. Like having your heart snatched by your crush without warning. Wait, what?

They say a picture is worth a thousand words.
Well, this picture shows just one word, but it does still say a lot, doesn’t it?

My assumption is that many drinking sites in Katipunan and Taft will earn a lot this evening after yesterday’s games. For La Sallians, even better, because they don’t have classes on Friday! But wouldn’t it be even more awesome if both schools came together for a bonfire with alcohol? Hey, UP should join and teach them how it’s done, diba?

Other than the UAAP games yesterday, it was also the evening of Hardwell’s concert (super bad timing for a typhoon and bad traffic to hit the Metro, I know). Problem is, Hardwell’s audience probably wasn't in the celebratory mood.

JUST IN: Malacañang declares National Conyo Mourning Day tomorrow, 02 Oct 2014, to commiserate with the losses of the Archers and the Eagles
— DLSU Amphiturtle (@Amphigong) October 1, 2014

Okay, this isn’t an actual holiday. But, I mean, it’s at least worth the discussion to create something like it, right, Philippine Government?

In times of excruciating pain and misery, even the bitterest of enemies would put their rivalry aside for some consolation and company.