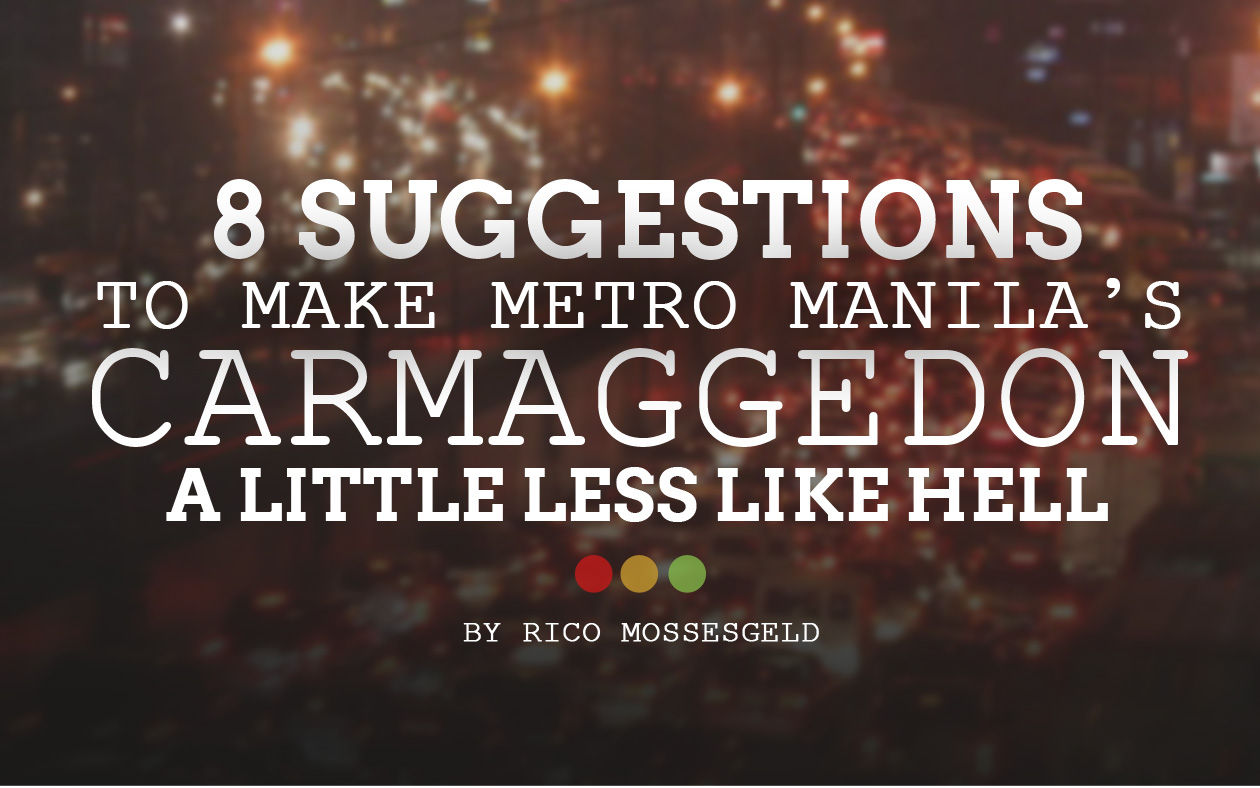 Many Metro Manila residents are bracing for the effects of government road construction projects planned for this year and the next two. The worry is that these projects will worsen the already bad traffic of the Philippine metropolis.
Yet we can all do our part to not just make to so-called “Carmaggedon” more bearable, but improve the long-term transportation prospects of Metro Manila. Especially if we...

8. Push for Outright Closures Instead of Lane Blockages

8 Opt for Outright Closures Instead of Lane Blockages

Via By Adam Dubrowa (This image is from the FEMA Photo Library.)Public domain, via Wikimedia Commons

Metro Manila isn’t the first city to suffer through a so-called “Carmaggedon,” and it certainly won’t be the last. In late 2012, residents in Los Angeles (LA), USA braced themselves for heavy traffic when a highway servicing 500,000 vehicles daily would be entirely closed for the weekend.

The reality was a bit different: because everyone knew the highway would be closed, they either stayed home for the weekend, or found another way around. There was no carmaggedon. By Monday, the construction was done and traffic flow was back to normal. And this was in one of the most heavily congested cities in the world.

For the upcoming road projects, why can’t the government just opt for outright closures instead of still letting one or two lanes of traffic pass through the construction area? Construction will be more efficient during an uninterrupted 54-hour period, instead of stretching the work into piecemeal segments that will be accomplished over several months. That’s because the contractor won’t have to worry about traffic, and can just concentrate on getting the proper work done as quickly as possible.

So what if they close EDSA for two days? That road by the way services around 360,000 vehicles daily, much less than that US highway. At least, the work will be done right away and there will be minimal disruption during the workweek. Of course, it all depends on getting contractors who can work fast and well, with no kickbacks on the side.

7. Use Apps Like Waze to Deal With the Traffic Better

7. Use Apps Like Waze to Deal With the Traffic Better

For smartphone users, Waze is a must-have. It’s a navigation app that crowd-sources information from everyone to determine the traffic situation for entire cities. Based on this the app suggests the best route for you through turn-by-turn voice instructions.

It’s helped LA drivers deal with their own “carmaggedon” as discussed above, and works great for a chaotic city with loads of secret side streets like Metro Manila. Waze may help you avoid the bad traffic on main roads like EDSA and C5, and still get you home before the majority of rush hour traffic.

Biking from Quezon City to Makati at the height of rush hour only takes 30 to 40 minutes one way, if you stay away from main roads like EDSA and know where to go (Waze can also help here). Such a trip however is very stressful. Aside from smoke belching vehicles blowing their pollution straight into your face, you also live on the edge and hope vehicles don’t plow into you.

If Metro Manila cities allot more bike lanes, specifying routes for bikers free from motorized vehicles, then a lot of people may just leave their cars at home and bike to and from work. Now in Metro Manila’s eternal heat you’re sure to get to work all sweaty, but if you can bathe at the office, why not take advantage of the free exercise and lower time travel made possible through biking?

Of course, this would require enforcing the bike lanes so that only bikes travel on them -- not an easy task in a country where drivers love filling up every empty space on the road.

If your office doesn’t deal with other businesses regularly (and even if it does), why not ask management to change the hours of operation? Instead of requiring employees to work from 9 to 6pm, they can come in at 7am and leave at 4pm, or whenever they want, so long as they accomplish 8 hours of work.

Not commuting with everyone else means you get to avoid the rush hour traffic, which many observers are saying will become worse as the government road projects ramp up. Even better, letting employees define their own business hours has loads of productivity benefits.

Via sterlingeducation.com
As an alternative for adjust business hours, why not ask management to implement a telecommute program? This will allow people to work at home, or anywhere they want. Now whether or not telecommuting is productive a fierce subject of discussion. Yet the potential benefits (reduced stress from fighting through the daily commute, and reduced costs of travel) are worth considering for any business that can afford to have employees work out of the office while maintaining productivity.

We all know about the chaotic state of buses in Metro Manila, who stop and go with no rhyme or reason, controlled by mercenary drivers who need to be aggressive to feed their kids. Yet buses are still very efficient (and cost-effective) compared to any other form of people transport, when used properly.

The key is (and always has been) making their operation more orderly, starting with express buses. These buses pick up passengers at a major point of convergence like the intersection of North Avenue and EDSA, and make only one stop, such as the Ayala MRT station. Express buses are much more efficient because they don’t have to stop along the way. Think of them as the large-scale version of your terminal-to-terminal FXes. Of course, “normal” buses, ones that stop multiple times along EDSA, will still operate, servicing passengers who don’t have to go all the way.

It’s very simple: make certain buses go directly from one high-traffic stop to another. The government can even reward compliant bus lines with these lucrative routes, which always ensures a full load of paying passengers. In fact, the LFTRB should’ve implemented this scheme years ago.


2. Push for Noynoy Aquino to Declare a "Transit State of Emergency" to Maximize the MRT-3

2. Noynoy Aquino Should Declare a "Transit State of Emergency" to Maximize the MRT-3

One of the latest he-said-he-said news topics involves the MRT-3, the public rail transit that travels along EDSA, one of the roads that will be severely affected once the road projects are underway.

On one side, you have the government agency Department of Transportation and Communications (DOTC), who say that MRT-3 operator Metro Rail Transit Corporation (MRTC) should’ve added more trains to service heavily congested rail line by now.

The MRTC on the other hand said that it has long tried to add brand-new trains for free, as laid out during the original MRT-3 contract, but was blocked by the DOTC, apparently because the government agency wanted to pay for second-hand trains.

The long and troubled history of the MRT-3 is much more complicated than that, with both sides pushing for their own interests to the detriment of the public, the significantly higher dollar-to-peso exchange rate today compared to the original contract signing back in 1997, and even a suit against the Philippine government from a Dutch investor (whew!), all coming into play.

Whatever the case, as the chief executive President Noynoy Aquino has the power to declare a “transit” state of emergency to break the impasse. This state of emergency would be severely limited in scope, covering only the MRT-3, and it should provide government officials the carte blanche they need to add more trains to the rail line, with as little cost as possible.

Not only will this provide an alternative to driving through EDSA’s heavy traffic during the so-called carmaggedon, it will also have long-term benefits. At the very least, we’ll see less of this.

To be honest, the various road projects scheduled for this year and the next two aren’t long-term solutions. They’re designed to make travel more efficient for cars, encouraging further car use that leads to even more traffic down the road (so to speak). A better approach would be to make mass transit in Metro Manila much better.

It’s not as expensive as you think. In fact, if we take the express buses discussed above and take them to a logical conclusion, you’d end up with a transportation system that’s significantly more efficient yet much cheaper than a rail line like the MRT-3: Bus Rapid Transit (BRT).

Here’s a video summarizing the benefits and cost-effectiveness of the BRT, featuring the city that pioneered the system, Curitiba, Brazil. Instead of using normal buses that travel in same areas as everyone else, the Curitiba BRT buses are special. They look more like road trains, and have their own dedicated lanes and station infrastructure, all of which were built and are maintained at a much lower cost than subway or train.

And who said a Metro Manila BRT should look like normal buses? Massive Jeepney road trains, anyone?
How has carmaggedon affected your life? Share your suggestions on how to deal with it in the Comments Section.