8 Cartoons Our Parents Regretted Allowing Us To Watch 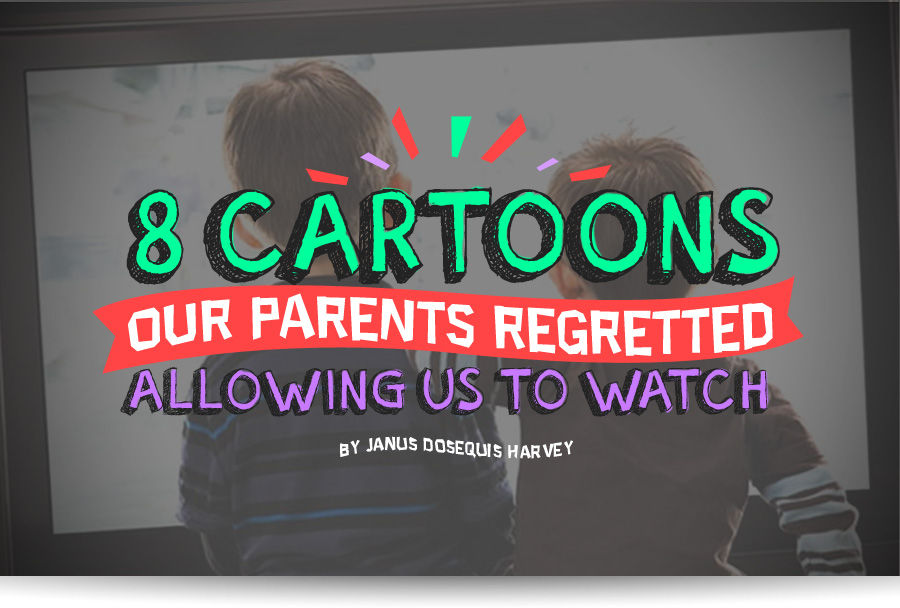 [dropcap letter="F"]or the longest time, our parents used the television as a makeshift pacifier for us when we were kids. Put us in front of the TV with some cartoons, and our parents need not worry about us for the next half hour or so. Nowadays, we do much of the same thing with our kids when we hand them child-proof tablets loaded with Angry Birds and Plants vs. Zombies.
Nonetheless, just like our kid accidentally discovering the web browser and unfettered access to free porn on the iPad, our parents didn’t exactly screen the cartoons they allowed us to watch. Here are a few of the ones we got away with until our parents decided to check out just exactly what it was that was keeping us entertained while they were reading the newspaper…

Via xytan.blog.fc2.com
The Hook: It’s the hard luck story of Nelo, and his faithful dog, Patrasche, as they go about selling milk to the people in their village. Seems like a genuinely heartwarming story that parents could get behind, right?
The Shocker: At the very end, Nelo and Patrasche die because of a stupid misunderstanding. To say that a lot of kids were traumatized when they saw this would be an understatement. In fact, I daresay that the only time I was more traumatized by a similar scene was when I watched “Grave of the Fireflies,” which came loooong after I’ve seen the conclusion of “Dog of Flanders” already.
But Hey, It Worked Out In The End! The talk about death became a lot less difficult and awkward after seeing your favourite milkboy and his faithful dog die after following their adventures for weeks.

Via college-social.com
The Hook: Wacky and completely watchable even for adults! I mean, he lives in a pineapple under the sea, so what could go wrong!
The Shocker: That’s probably because most children’s programming nowadays were made by adults who have very weird ideas what’s suitable for kids. Granted, there’s far worse programming out there for kids to watch, but in that weird transition between the Saturday Morning Cartoon generation and the Spongebob generation, people began making decidedly not-children’s programming, put in some general wackiness, and shipped it right back for kids.
But Hey, It Worked Out In The End! Most of the really adult stuff, like, ahem, “Sandy Cheeks,” flew over the kid’s heads, anyways. Adults got an extra chuckle from the show, and who says that the new approach to children’s programming is necessarily a bad thing?

Via animangasm.blogspot.com
The Hook: I’m sure it’s as harmless as the Ghostbusters, right? What could possibly go wrong?
The Shocker: There was so much death and violence in the show that Dragonball Z seemed like Sunday school in contrast. In fact, death was referenced via euphemism so much that the word “tapusin” has pretty much become our generation’s “salvage.” And, oh, wait ‘til the kids start imitating the show and they go home with bruises.
But Hey, It Worked Out In The End! Watching a violent show didn’t mean our parents were raising violent kids. And between getting out  there and playing with other kids and sitting on the couch all day waiting for virtual friends to challenge you on xBox Live, I think it’s safe to say what most (sane) parents would have preferred.

Via alphacoders.com
The Hook: A super-powerful guy with great friends, and even a moral lesson at the end of each episode! No way this could go wrong!
The Shocker: How many kids who really loved He-Man wanted He-Man at their birthday party? And how many moms ended up calling the guy they last met at their bachelorette party to do the honors? That must have led to some very awkward conversations.
But Hey, It Worked Out In The End! Male strippers need to get paid, too, and if it meant doing a children’s party in a He-Man costume, it’s an honest living, right?

Via news.com.au
The Hook: Robots! So, it’s like, they don’t die, nobody gets really hurt, and it’s all good, right?
The Shocker: Have you seen the original animated movie? Many childhoods were shattered in the first half-hour alone. Not to mention the shocking amount of toys parents of Transformers fans had to buy, and at ridiculous prices even back then.
But Hey, It Worked Out In The End! Michael Bay is making gangbusters on the rubble of our childhood, and who are we to deny the man a living wage? Oh, who am I kidding? Screw that guy.

Via en.wikipedia.org
The Hook: It’s a cartoon about Jesus! How can you possibly have any reservations against that in your typical conservative Catholic Pinoy family?!?
The Shocker: Watching this show inevitably led to very uncomfortable questions about the Bible, and why nobody bothered trying to prevent Jesus from getting crucified. Can you imagine your 10-year old self grasping the concept that Jesus had to die no matter what, because His Dad required it to happen? That’s pretty heavy stuff right there.
But Hey, It Worked Out In The End! Once you’re confronted with the inherent absurdity and blood-thirstiness of it, you begin to have a healthier view of religion. Hopefully.

Via hdwpapers.com
The Hook: It’s cute! That coyote keeps trying to get Road Runner, but he never does! It’s funny!
The Shocker: Parents tend to laugh until their kid hits them pretty hard and laughs in their face. At this point, they overreact and the kid never sees another cartoon until a new, more high-definition TV gets invented.
But Hey, It Worked Out In The End! Now, we can shame our kids online if they do that! Hooray parenting!

Via oocities.org
The Hook: My kid told me it’s just about some ninja girl trying to save the world! I know. Been there, done that. It sounds so boring I don’t think I even want to watch with them.
The Shocker: WAIT A MINUTE.
But Hey, It Worked Out In The End! Now, it’s dad watching “La Blue Girl.” All the time.