"A news article posted on CBCPNews about certain assertions by a obstetrician and gynecologist on the alleged dangers of vaccines has gone viral and has evoked mixed reactions.
The story began spreading on social networks and although it is purely a news story, some people misinterpreted that the bishops’ hierarchy share the same sentiment.
While the article dated March 24 revolved around the stand of Dr. Eleanor de Borja-Palabyab, president of Doctors for Life, and did not claim to express the sentiments of the Church, other well-meaning readers have volunteered to enlighten the public on the issue.
Among the notable reactions is a blow-by-blow rebuttal to the claims of Dr. Palabyab by Dr. Colleen Costello, FAAP, an emergency physician at the East Tennessee Children’s Hospital in the United States." 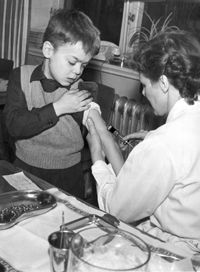 8list.com.ph previously published an article by Kel Fabie where he commented on an anti-vaccination article that appeared on the CBCP-affiliated website cbcpnews.com. Fabie described the article as "very problematic" and "grossly irresponsible;" he also called for the article's retraction, "lest they endanger more lives".
On April 1, cbcpnews.com published an article by Colleen Costello, MD, FAAP, "an emergency physician at the East Tennesee Children’s Hospital in the United States" and a Fellow of the American Academy of Pediatrics. Costello asserted that "Vaccines Save Lives", a response to the original anti-vaccination article. For some reason however, Costello's article no longer appears on the website. However, the article can still be retrieved from Google's cache.
Here are that article's 8 most important points. To wit:

"The CBCP News website recently put up an article that was (misleadingly) entitled, 'The Truth About Vaccines'. The article was based on a talk given by a certain Dr. Eleanor de Borja-Palabyab, MD about vaccines. During that talk, she made a number of assertions about vaccines, all of which ran the gamut from incredibly misleading to patently false. Much to my chagrin, the author of the article repeated these claims, without providing any indication that they run against everything that the scientific and medical community currently accepts as truth."

"Dr. de Borja-Palabyab begins by parroting the oft-mentioned appeal to fear that vaccines contain harmful chemicals (she cites mercury and formalin) that have been liked to autism. She is wrong, wrong, and wrong on all three counts."

6 Most Vaccines Don't Have Mercury-Containing Compounds in Them, Despite No Evidence of Harm

"...thimerosol (the mercury-containing compound used as a preservative for some vaccines) has been removed from essentially all (except for the flu vaccine) of the current recommended vaccines since 2001. This was done in spite of the fact that a comprehensive review of the use of thimerosal in childhood vaccines conducted in 1999 by the Food and Drug Administration of the United States found 'no evidence of harm from the use of thimerosal as a vaccine preservative, other than local hypersensitivity reactions'."

5 Our Bodies Generate More Formalin Than What are in Vaccines

"Yes, it is true that some vaccines contain minute amounts of [formalin], but it is so dilute, it can hardly be detected. We are naturally exposed to much greater amounts of this chemical in our natural surroundings; it is present in building materials, cosmetics, and several household products, not to mention the fact that our own bodies naturally produce this chemical in much higher quantities!"

4 Wakefield Was a Fraud

"People who [claim vaccines cause autism] almost universally cite Andrew Wakefield, a former physician and researcher who published a fraudulent paper in 1998 about the link between autism and the MMR vaccine. Mr. Wakefield’s study was found to be falsified, thus leading to a complete retraction of the paper by the publishing journal, The Lancet. In addition, Mr. Wakefield has been stripped of his medical license because of his professional misconduct in falsifying his data."

On a related note, Wakefield received money from lawyers who were suing producers of the MMR vaccine. In other words, Wakefield profited directly from publishing "a fraudulent paper".

"By bringing up the fact that the cell lines [used as a culture medium for certain vaccines] originated from two aborted fetuses in 1964 and 1970, she attempts to muddy the waters by pushing the button of Catholics who are, like myself, naturally pro-life... the Vatican has already weighed in on this issue in a statement it released in 2005. While it expressly condemned 'the original immoral act (the voluntary abortion)', it also took pains to give permission to use these vaccines, as vaccines are 'necessary in order to avoid a serious risk not only for one’s own children but also, and perhaps more specifically, for the health conditions of the population as a whole – especially for pregnant women'."

2 No Basis in Reality

"It is clear, therefore, that the article was not presenting the 'truth about vaccines'. It is doing nothing but presenting falsehoods and conspiracy theories that have little-to-no basis in reality. Filipino children die of infectious diseases every day, and by giving voice to these sort of claims, individuals or groups like Dr. de Borja-Palabyab play a dangerous game with people's lives."

You can view the entire article in Google's cache here. Photo from Wikipedia.