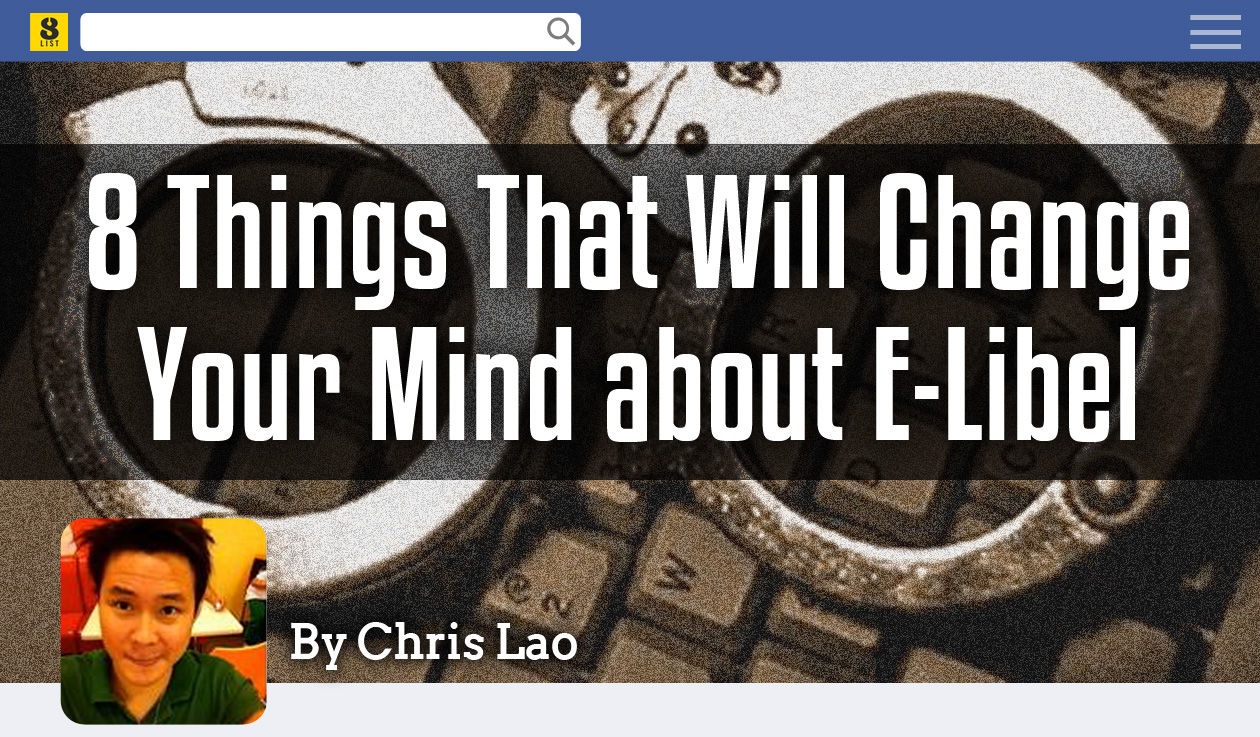 Editor’s Note: Now a practicing lawyer, the former object of name-calling (and even death-threatening!) online scorn Christopher Lao clears what he calls misconceptions about libel propagated through the internet and other digital forms of media.

8 Some think it curtails freedom of expression, speech or press

Via reynaelena.com
Libel is not the same as infringement, which explains the SC striking down Section 19 or “the takedown clause” as illegal, and upholding e-libel as valid.
Infringement is what curtails freedom of expression/speech/press. Why? Because regardless of the content, protected or not, you are prevented from expressing, saying, publishing.
Libel is different, you are free to express yourself but be ready when content is determined by courts to be damaging.

7 Libel is not unconstitutional because the Constitution itself reminds us that we have rights, but so do other people

Libel has a host of elements that must concur before a finding of libel can be had. These are, in a nutshell: 1) that you say somebody committed a crime, has a defect—real or imaginary, or he has a status, condition which 2) tends to cause dishonor, disrespect, etc.; 3) it is heard/viewed by a third party; and 4) there is malice.
Malice is key. If you say something in jest, there is no malice, hence no libel.

6 Some assume that the e-libel provision will prevent or prohibit people from commenting on government affairs.

Via davaotoday.co
For private individuals, malice is presumed. Meaning the accused has to prove otherwise.
That is not the case with public officials. Malice is not presumed in their case. Meaning the burden of proof shifts to them to prove the existence of malice.
Why? Because speeches made on matters of public concern are presumed to have been made in good faith, for the betterment of society. We want, after all, a robust discussion of public issues; hence the highest of standards.
Public officials are supposed to be thick-skinned. They have thrust themselves into the limelight so they expect to be talked about. Such is human nature. We talk about what is before us. They too will choose their battles. It's rule of war number 1.

5 There are matters already deemed to be untouchable by laws when it comes to libel/defamation.

4 “E-Libel is a crime prone to abuse so might as well scrap it” -Why?

Via getrealphilippines.com
This argument barely even scratches the surface. It is a problem with implementation not the law’s merits.
If we argue this way, we might as well scrap all penal laws, since they are all prone to abuse.
Nothing prevents a person from filing frivolous suits. In the event that crazy person files a baseless suit against you, do your scream system failure? No. You go through a process—a process which I can guarantee you is a hassle. But since when is hassle a legitimate argument in a well-ordered society? Never.
You suck it up like we all do in the name of public order.
Is being impleaded equal to being guilty? Of course not. No less than Constitution says we are all presumed innocent until the contrary is proved.
It also says nobody can be detained solely on the basis of his political beliefs and aspirations. We have a right to due process.

3 The purpose and nature of a civil suit differ from that of a criminal suit. A criminal suit aims to lock behind bars criminals.

Via hcdlaw.com.au
Its purposes are: to detain the evil, pre-empt further disorder (remember the injured party may resort to reprisal), and to deter others from engaging in similar menacing behavior.
Because public order is at stake, the issue has a public dimension. That is the case/treatment accorded acts are malicious, intentional, vicious, it is not purely private. The State is interested because public order is shaken.
Can you imagine a rapist freely prowling our streets? The danger of having another unsuspecting girl fall victim to this criminal is a real possibility.
Same is true with cybercriminals. They can't be allowed to stay home with free access to their gadgets [and the Internet].
A civil suit does not contain evil.

2 Imagine if e-libel is purely civil. Those with money can just dismiss it as nothing. Rich people can therefore afford to be a menace.

Via kaipodshuffle.blogspot.com
Anyway even the poor can afford to be a menace, too, since they have no money against which a judgment can be executed.
Why the analogy between physical harm and moral/psychological harm? Well for me, both are injuries.
Inherent in every person is dignity. We have no right to harm that dignity. You can't just call a person out in the open a slut, or human excrement without any worth whatsoever.
We have no right to shame anybody. We have no right to put anybody in ridicule.

1 Dignity is an essential element of public order and criminal libel laws remind people of the importance of mutual respect.

It is a collective commitment of societies past and present. So it's a question of what society you want.
You see dignity is all a poor man has. He can proudly say that he lived a life without defrauding other people. That is much an achievement as having earned billions or having won Olympic gold.
It levels the playing field, so to speak. It is a valuable asset whose protection must be assured by the State.