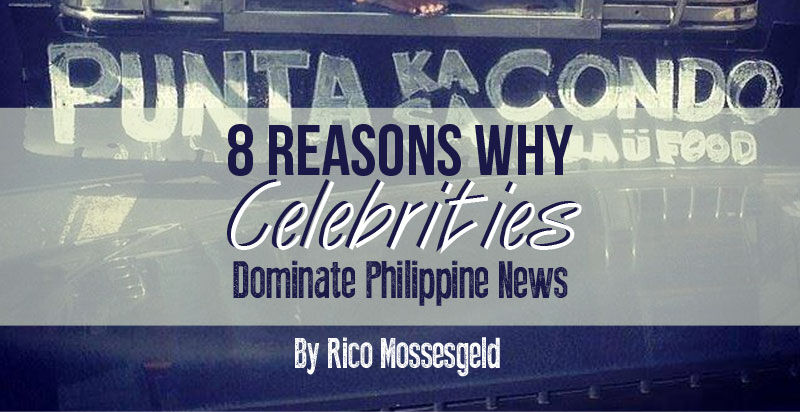 [dropcap letter="F"]orget about misused public funds, relief efforts in Visayas, and even the latest chance for everlasting peace in Mindanao. In the wake of Vhong Navarro’s beating and the subsequent rape/blackmail accusations, local news publications are pushing out important stories with headlines like:

In broadcast news, an episode of TV Patrol focused 65 percent of its airtime on Vhong Navarro-related topics, while 24 Oras on the same day devoted 43 percent to the cause célèbre.

Clearly, the alleged deeds of showbiz personalities take precedence over “less pressing” issues such as institutional corruption, making life normal again for thousands of disaster survivors, and avoiding further bloodshed for future generations. This also isn’t the first time the news has been dominated by celebrities.

Just what is it about them? Well...


8. Celebrity News Makes Us Feel Better About Ourselves, Part 1

Celebrities represent the best of us, at least in terms appearance, charisma, success, or a combination of the three. According to evolutionary psychology, it’s natural that we want to know more about these so-called “high-status individuals” and what they’re doing.

That’s because we want to do the things these celebrities do. We want to wear what they wear, eat where they eat, have what they have, so that we can feel like we’re one of them, enjoying the same kind of social status and attention.

Or at the very least, knowing what celebrities are up to means we can tell other people about it, and pass ourselves of as knowledgeable observers of what’s hot and not.


7. Celebrity News Make Us Feel Better About Ourselves, Part 2

The flip side of our adoration: we also love it when celebrities fail or suffer. Taking pleasure from the setback of other people is so common, there’s a fancy German word for it (schadenfreude).

According to a study published through The New York Academy of Sciences, schadenfreude is driven largely by envy. For celebrities, this envy creates a set expectations that give us a sense of validation when fulfilled.

For instance, a celebrity caught cheating on his girlfriend or spouse would make many of us think: “Of course he cheated! All he does is appear on TV shows and movies, and he has nothing better to do with his millions. Serves him right that he got caught!”

In other words, our schadenfreude for celebrities makes us feel better about our own ordinary lives. We use the misfortune as gossip fodder, telling each other how thankful we all are to that we don’t have to live the carefree yet corrupt celebrity lifestyle. It’s just too much hassle!


6. We All Love Conflict, Especially When its Public

Nothing attracts our attention more than conflict. The Romans enjoyed to-the-death gladiator fights, just as Filipinos enjoy watching basketball games. While there’s no more bloodshed in the latter case, there’s still the kind of competition that satisfies our constant longing to find out who will win.

And yes, conflict isn’t limited to physical activity. In fact, for many a war of words is even more exciting and compelling, especially if it involves notable personalities like celebrities and politicians.

So yes, this is another way celebrities creep into our collective national consciousness. Whenever there’s a public conflict, we all want to know who will win the latest round, or at the very least cheer for the perceived underdog.


5. We Have No Royal Family to Pay Attention To

On a more serious note, without a royal family to obsess over and gossip about, TV and movie celebrities fill the void. We even go gaga when a foreign celebrity pays attention to the Philippines, even if said celebrity was censured by our own Congress(!) for mocking a national icon.


4. Celebrity Worship is Quite Intense in the Philippines

The first two reasons are true wherever you go. Here in the Philippines however, celebrities transcend certain boundaries their foreign counterparts can’t.

In the book Celebrification in Philippine Politics, Dave De Guzman Centeno argues that, based on a 2008 study, Filipino voting decisions are strongly influenced by celebrities.

The reason is that, ironically, celebrities are seen as independent of our corrupt political processes. Therefore when they make a recommendation on who to vote for or run for office themselves, the celebrities’ supporters believe the endorsement or candidacy represents a valuable opportunity for real change.

So in the Philippines, celebrities don’t just influence how we act or what we buy. They’ve even affected who we’ve voted for in elections for the past 75 or so years.

Local politicians (many of whom, as mentioned above, are celebrities in their own right) have long understood that involving themselves in celebrity matters results in free publicity. Convening senate hearings for a leaked sex video scandal helps get these politicians’ names out there, through news organizations who are supposed to cover political developments (and personalities) anyway.

It’s as simple as commenting on the issue itself. Even if this kind of exposure makes some people question these politicians’ competency, the job is done. These officials’ names will remain the topic of public discussion whenever celebrities are involved, ensuring “brand recall” for the next election.


2. Two of the Country's Biggest News Sources are Also the Biggest Studios/Talent Managers

Both ABS-CBN and The GMA Network are media conglomerates. Which is why, aside from their respective news-gathering organizations, they both maintain a stable of celebrities for their steady supply of TV shows and movies.

So perhaps it’s in both companies’ interest to insert their own stars into the news. The coverage may be negative, but it still gets the celebrities’ names out there (similar to what politicians do as described above). Again, even if the resulting exposure is negative, it’s still publicity which can be maximized for future promotions.

Theoretically, controversies even become proxy wars, where one conglomerate tends to come out with stories that support its star, and the other pushes the opposite side (at least until more facts come out).


1. It's How Media Organizations Survive

Take all of the that, and you’ll realize that it’s quite possible that local news outlets are just giving people what they want. They might not be aware of the reasons above, but experience has shown that celebrity controversy coverage will always attract an audience.

It’s simple economics: with little or no readers or viewers, you won’t be able to attract advertisers’ pesos and stay in the black. Without these easy-yet compelling stories that bring in the money at relatively low cost, how can you continue operating? Who will fund coverage of the real and complex issues?

What are your thoughts on this matter? Let's discuss in the Comments Section.