8 movies for the broken hearted 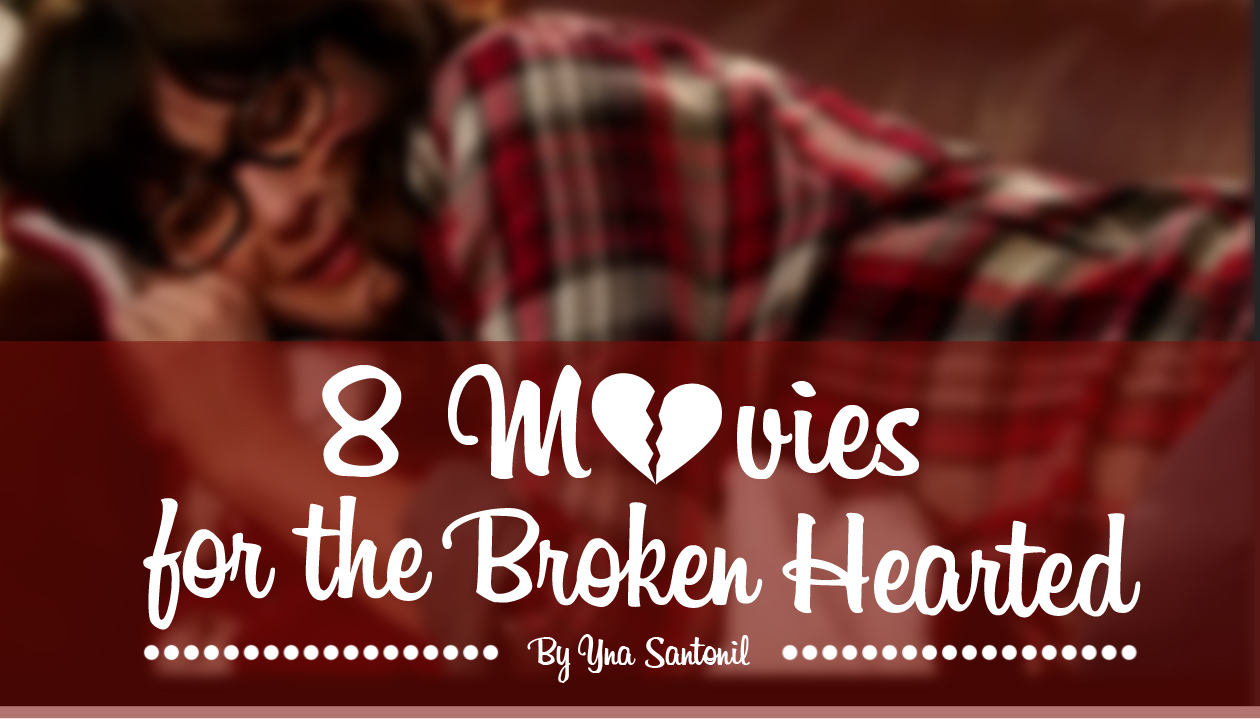 [dropcap letter="R"]ecently single? Just been dumped? Left the love of your life because love is no longer enough? Or yearning for that ultimate date that never seem to arrive? Not to worry, the perfect day to wallow in self pity is coming up. The upside to this is that no one will judge you for being lonely on Valentine’s. After all, one can only take so much hallmark cheesiness when you don’t have anyone to cuddle with.

So here’s a suggestion: binge on your favorite comfort food, tuck yourself in with your softest pillow and do the ultimate movie marathon for the brokenhearted. These films know what you’ve been through (or what you’re going through) and they won’t pass judgment when you find yourself swimming in your own tears two hours later. There’s retribution in it all. This is therapy: you’ll be feeling a tad bit more optimistic about finding true love after seeing these films. Or you can just pick up the phone and call your ex. Whatever works.

Why: because you don’t have a legit broken heart if your eyes are dry after seeing Leah Salonga and Aga Muhlach saying goodbye scored by the Gary V. classic.

Agnes (Lea Salonga) moves to the US separating her from successful ad exec boyfriend Jerry (played by Aga Muhlach). Like most long distance relationships, it takes a toll on both of them and Jerry falls for one of his officemates (surprise there). They grow apart. But as fate would have it, they meet again in the states and Jerry tries to win her back. Does he succeed? Or do you really think they should work it out?

This is not a love story.

The ultimate film about bitter non–exes told via number of days the non-relationship lasted. It adds a whole new meaning to the relationship status “It’s complicated.”  Think you have it bad? Imagine how Tom (Joseph Gordon–Levitt) felt after being left by someone he never really had.

And the song goes: “I don’t know you, but I want you, all the more for that.”

“How often do you find the right person?” is question that this movie aims to answer. You have the Guy (played by Glen Hansard) and the Girl (Marketa Irglova) working through their past loves and discovering a new love for each other through their songs. "Once" isn’t a cheesy musical, it actually deals with career choices and long distance love.

Gives a whole new meaning to “You don’t choose who you love.”

Academy award nominee “Her” tells the story of Theodore, a man in the final stages of his divorce, who finds love again in the figurative arms of his OS. There’s a little bit of pinch when you hear most of the lines, and you get to wonder how something so unrelatable can be hit so close to the heart.

How do you know if the distance is worth it?

Here’s another one on long distance relationships because we’d all like to believe that it’ll work out in the end. A British college student (Felicity Jones) falls in love with an American student (Anton Yelchin) but they get separated when Jones is unable to return to the US after violating her student visa. They deal with a whirlwind of customs and immigration battles and are pushed to the limit of sustaining a long distance relationship. The theme song says a lot about what happens in this film.

Spoiler alert: The theme song is “Dead Hearts” by Stars.

If you could only erase memory.

Heartbreak can be crippling. There are moments when waking up is so painful because you are greeted by memories you wish could be relived. The whole world aims to remind you of the love you have lost. If only memories could be conveniently erased. In Eternal Sunshine of the Spotless Mind, Joel Barish (Jim Carrey) finds out that his long time girlfriend (Clementine) has undergone a procedure erasing him from her memory. Vengeful, he decides to go through the same procedure but realizes that he doesn’t really want Clementine gone from his head. So do you really want your past love erased from your memory to move on? Or is there any consolation with living with the memories?

You see a couple so perfect for each other and you sincerely wish (with just a tinge of jealousy) that they go and fly off into the sunset to start a happily ever after. Or who knows, you could be one half of that couple. You could have found your best friend and your soulmate in the person that you marry.  But does this guarantee that you get to spend your lives together forever? Celeste and Jesse are the ultimate couple but one decides to be a little more practical. Lives change, marriages end, and moving on doesn’t seem as easy as it should be. The movie shows us that no amount of logic can save us from heart wrenching pain.

This deserves to be in the top one because no one can deny that they have not wanted to say, or have said at one point, those lines above. Those lines encompass the first four stages of grief—denial (refusing to believe they have found someone else), anger (being mad at them for finding someone else), bargaining (“I am eating up my pride so please choose me”), and depression (the teary–eyed, begging, I-have-nothing-more-to-lose monologue). And still the pain does not stop there, they answer back and the world starts to crumble: “She had me at my worst. You had me at my best. Pero binalewala mo lang lahat yun.” But you don’t stop explaining: “Popoy, ganun ba talaga ang tingin mo? I just made a choice.” A beat. It probably seems like forever and then they reply:

“And you chose to break my heart.”

BOOM. Your heart is torn open and every memory of every single heartbreak comes whooshing in. Both of you are hurting, but you’re no longer hurting together.

Grab that DVD, it’s time to start the therapy.

What are your go-to sad bastard films? Let's talk (and cry a little) about them in the Comments Section.