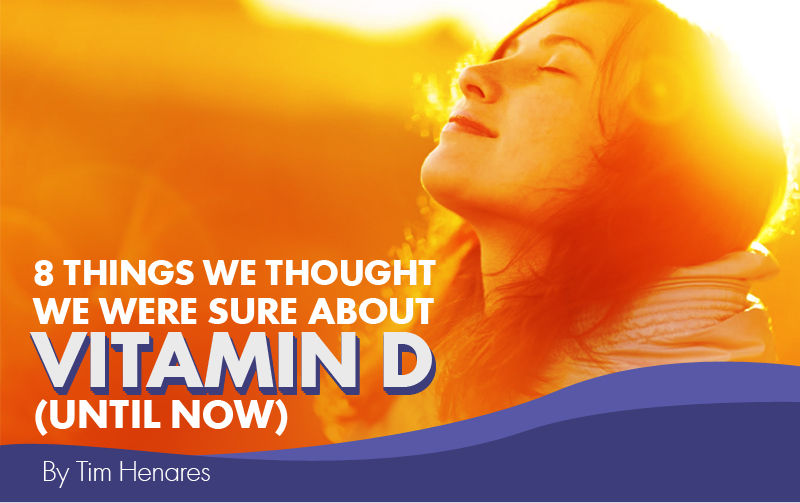 For the health-conscious out there, you probably have already heard so much about Vitamin D and its important role in staying healthy. It's been the most-talked about and most-written about supplement of the decade, and with good reason.
Despite all these buzz about the importance of Vitamin D, we tend to take it for granted and have made wrong assumptions about it. Here are 8 things we thought we knew about Vitamin D---and the truth behind those myths.

8. The Myth: Calcium Is All I Need to Build Strong Bones and Muscles 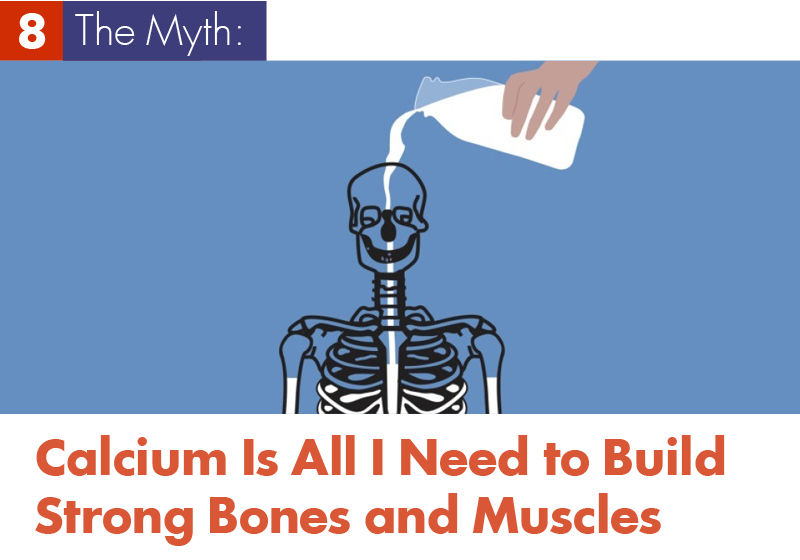 It goes without saying that calcium is necessary to building bones and keeping them healthy, but Vitamin D is just as important as all the calcium in the world is useless if your body can't absorb it. One guess as to what Vitamin your body needs to do just that (HINT: It's Vitamin D). If you take a whole bunch of calcium supplements but end up skipping out on Vitamin D, then you're pretty much just wasting your money.

7. The Myth: My Bones are All Good, I'm Far from Osteoporotic, So Not Taking Vitamin D Is Cool, Right? 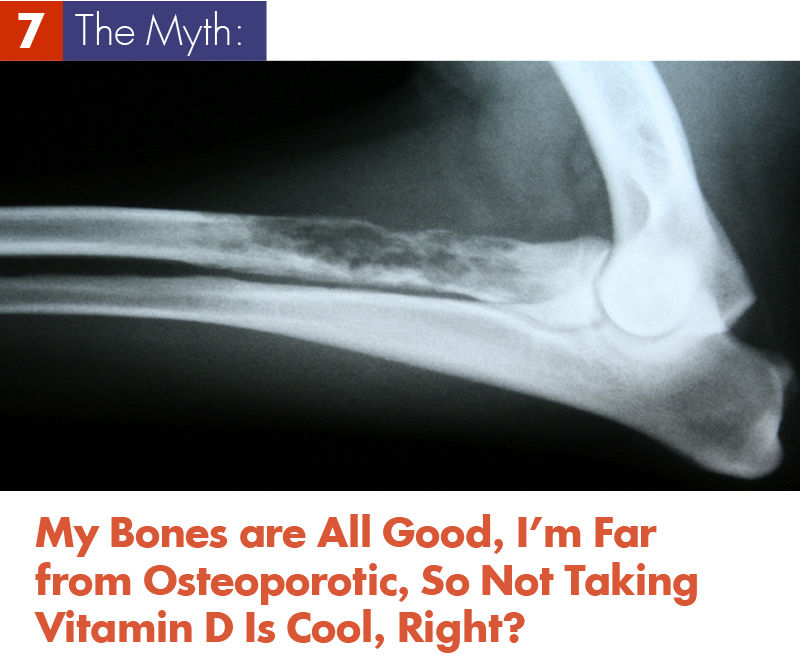 Err, no. Vitamin D does more than strengthen your bones. In fact, studies indicate a link between Vitamin D deficiency with many chronic diseases such as cancer of the colon, breast, and prostate; high blood pressure and cardiovascular disease; rheumatoid arthritis; neurological disorders such as dementia and other autoimmune diseases such as multiple sclerosis and diabetes.

6. The Myth: Vitamin D Is Just Another Ordinary Vitamin 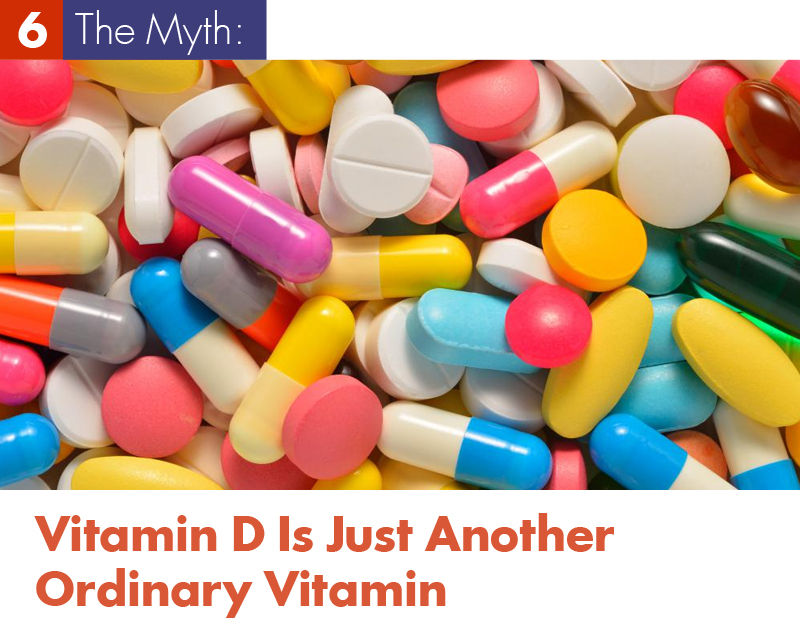 Aside from the fact that you don't call the building blocks of your health “ordinary,” you have to also understand that Vitamin D is unlike other vitamins because it is in fact a hormone. Every tissue in the body, including the brain, heart, muscles, and immune system has receptors for Vitamin D, meaning that this nutrient is required at proper levels for all these tissues to function properly. It acts as a signalling mechanism to turn cells on and off, it modulates cell growth, helps in reducing inflammation, and helps with neuromuscular and immune function. You sure you want to not have any of those things going for you? 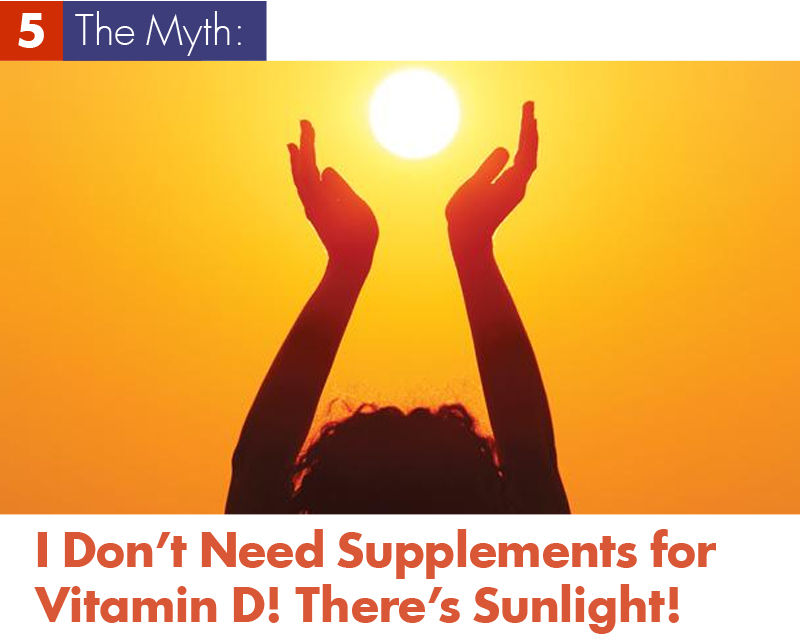 If you work outside all year-round, you may very well not need a Vitamin D supplement. But since most of us don't have access to consistent and safe exposure to ultraviolet rays (dermatologists insist we wear sunscreen for daily use, remember?). Maybe you work indoors all day long. Maybe your dark complexion or your not-so-young age hinders you from receiving more sunlight. If any of these factors apply, then a Vitamin D supplement is right for you. If you don't think so, then munch on this: Australia, considered the sunniest country in the world, actually has a high prevalence of Vitamin D deficiency in both children and adults. If they need it, what makes you think you don't need it?

4. The Myth: The Best Time to Get Vitamin D Via Sun Exposure Is Early Morning Or Late Afternoon 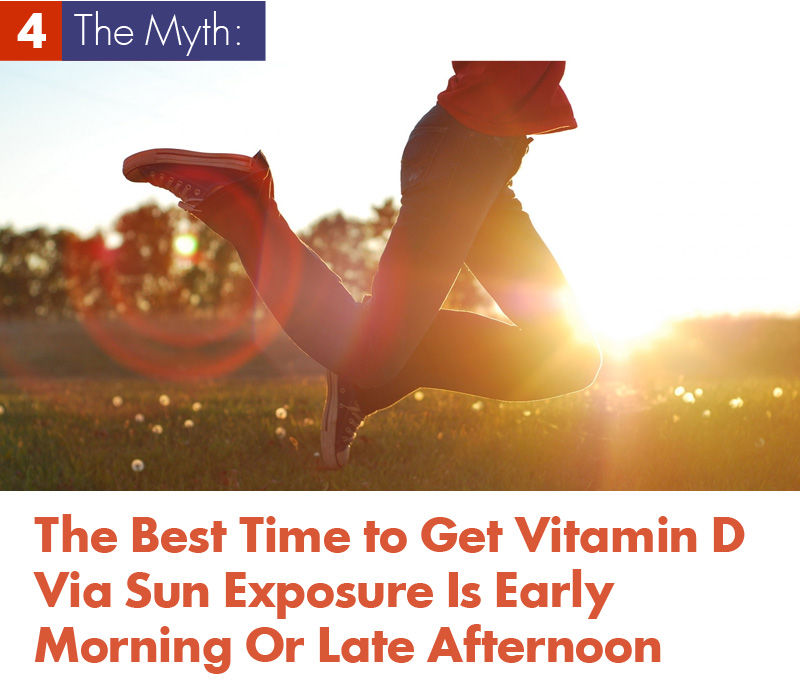 Your skin produces more Vitamion D if you expose it during the middle of the day. When the sun's rays enter the Earth's atmosphere at too much of an angle, the atmosphere blocks the UV B part of the rays, so your skin can't produce Vitamin D. And yes, this happens during the early and later parts of the day. A good rule of thumb is that if your shadow is longer than you are, then it’s not a great time to get some Vitamin D.

3. The Myth: I'll Just Eat Plenty of Fruits and Vegetables for Vitamin D, Then 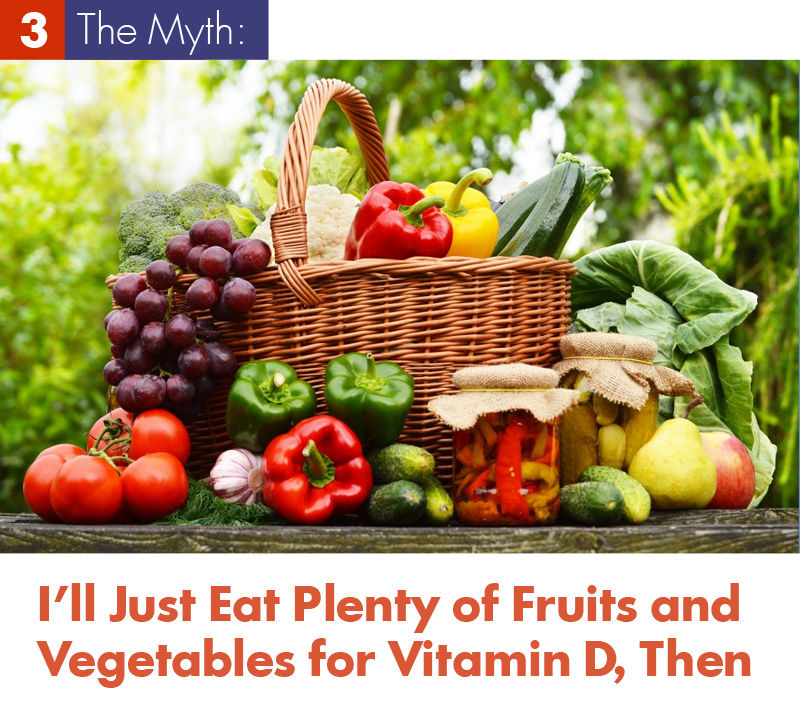 Surprise! Vegetables and fruits don't really provide you with Vitamin D, unless you want to eat two and a half platefuls of kale or mushrooms on a daily basis. Experts say it is rarely possible to consume adequate Vitamin D through food. Eggs would be your best bet, but we all know that the tradeoff for that is an insane amount of cholesterol. So yeah, while diet would have been nice to buffer the lack of sunlight we all probably are going through, it's pretty clear that you need a massive diet overhaul to make it happen. 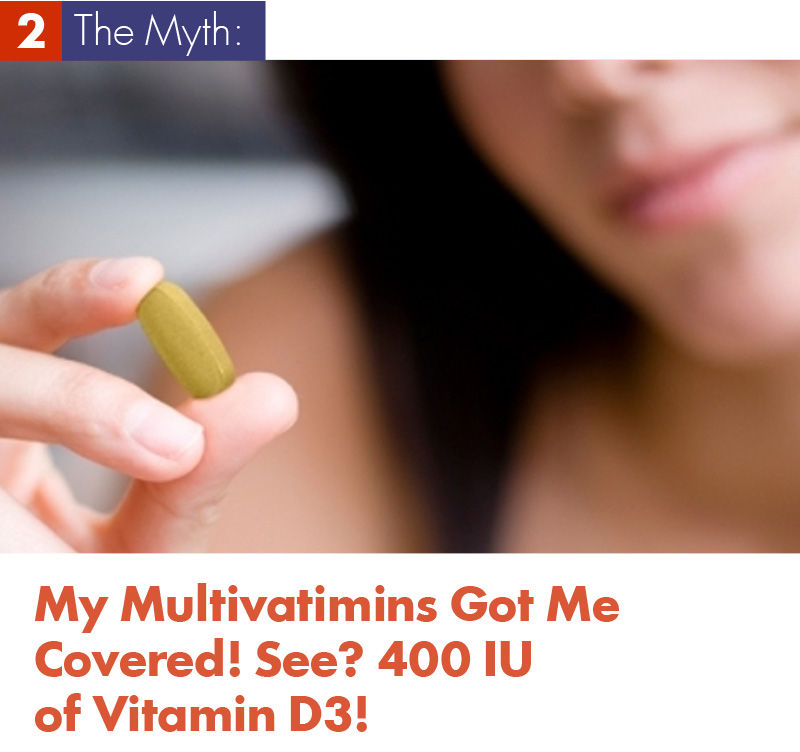 The Institute of Medicine actually recommends a daily intake of 600 IU for people under 70 years of age and up to 800 IU per day for 71 and older. Other experts advise even higher amounts! Dr. Michael Holick, an expert in Vitamin D, says it is actually very difficult to reach toxic levels of Vitamin D, to begin with, so an overdose isn't exactly likely to happen. It's highly recommended you ask your doctor what daily Vitamin D intake is best for you.

1. The Myth: Vitamin D Deficiency Would Only Be Common Among Call Center Agents Since They're Asleep During the Day 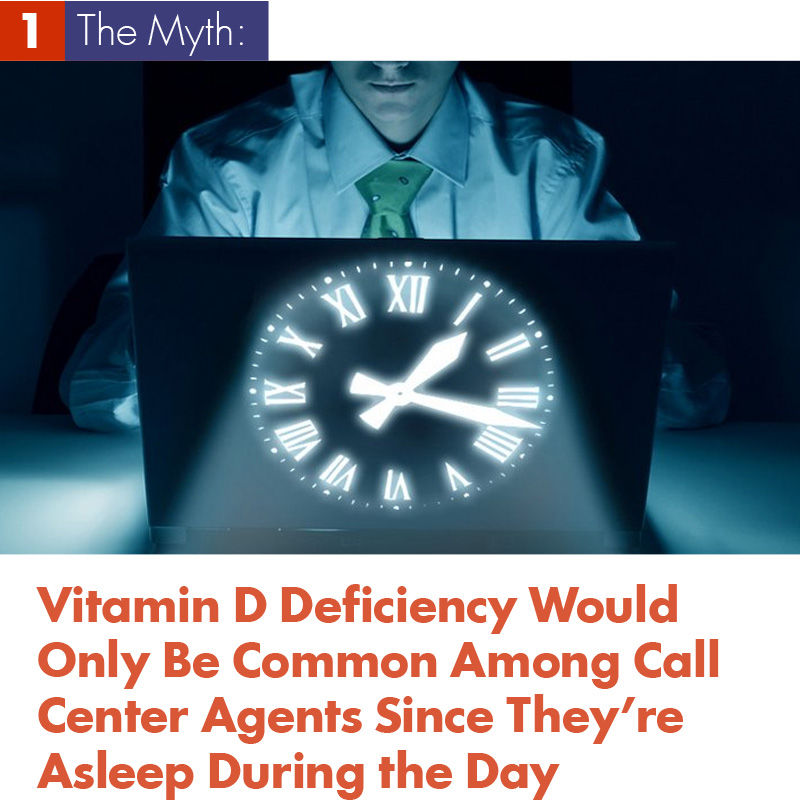 An ongoing study done by Unilab in partnership with Hi-Precision Diagnostics shows partial results that 7 out of 10 working adults in Metro Manila and other urban areas in the entire country are in fact Vitamin D deficient. This result does not only cover employees of BPOs, but also those from government, industrial, shipping, manufacturing, retail, and healthcare industries.
In fact, what's to say that you aren't Vitamin D deficient right now?

Ask your doctor to know more about vitamin D deficiency and its effects on the body.