8 Reasons We Can't Help But Hate The New DOH Ad 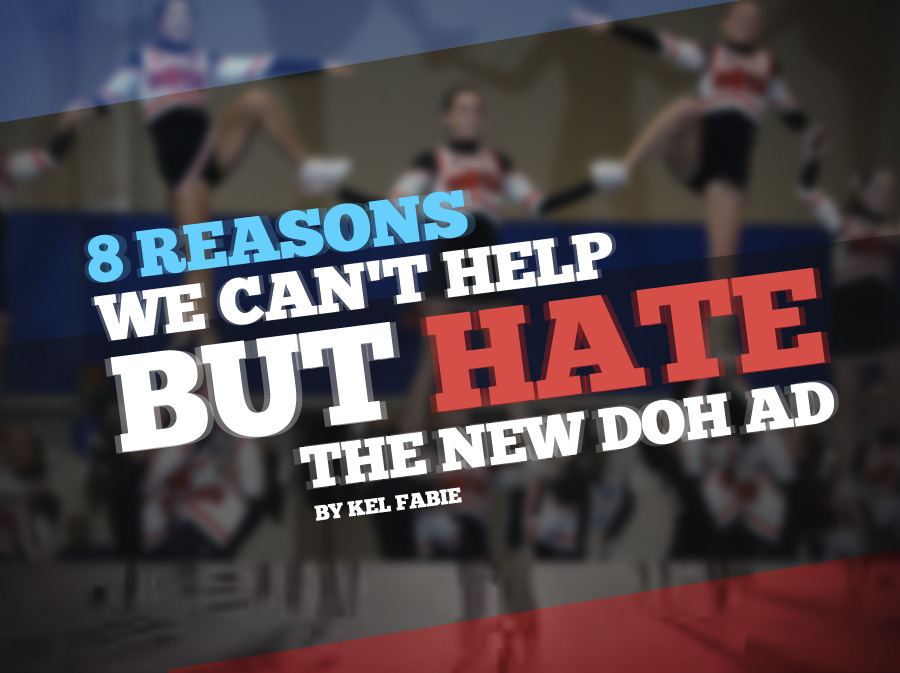 [dropcap letter="T"]he government has never really been known for producing the best of infomercials. Admittedly, aside from our Department of Tourism, it's hard to even think of a single advertising campaign by a government body that really captured our imagination.
The Department of Health (DOH) has recently come out with a new ad (see embedded video above) designed to “combat” teenage pregnancy, which is definitely noble in intention, what with our country being one of the countries with the highest incidence of teenage pregnancy in the entirety of Asia. Unfortunately, how the ad went about it was terrible. Cringe-inducing terrible.
Here are 8 reasons why we really aren't huge fans of the latest “GABO” DOH ad...

Oh, lordy. The lyrics. “Kung ako'y mahal mo, surrender mo ang bandila?!?” Who talks like that?!?
Did they hire a jeje rapper to make these lyrics or something?

Via everybodysgood.com
Obviously, this was a campaign targeted towards abstinence, instead of promoting using birth control. Which, again, falls under the dichotomy of the RH Law divide between conservatives and progressives. That's well and good, if you personally fall under one way or the other, but as a government agency, that isn't their job. Their job as the DOH actually involves making people aware of birth control, because heaven knows a ton of adults in our country know next to nothing about it, too. And we already know for a fact that abstinence campaigns are a complete bust, because at no point do you tell these kids about how to use protection when they do end up being unable to resist their urges.
Nobody says you shouldn't encourage abstinence. But to make it the only option you're promoting is disingenuous and misleading at the same time. Remember: this is a health campaign, not a morality campaign.

Via mgkid.com
D.A.R.E., the anti-drug campaign meant to keep kids away from drugs, has done more harm than good because the half-truths and exaggerations found in their paraphernalia has led to kids pretty much completely ignoring the things they get right because trying drugs once would make you realize it is not as bad as a scare campaign says it is (think “Reefer Madness” levels of exaggeration. It can routinely get there). It's obviously not good, but because you're not channeling demons and puking your intestines out in one go, it makes the average person think that they've been lied to, and it isn't out of the realm of possibility that they'll show you how wrong you are to lie to them by taking all the drugs.
Now, think about how this works in the context of the “GABO” ad: the ad tries to scare kids into not having sex, without being given any relevant information (they never mentioned teenage pregnancy even once in the song!) why they shouldn't, other than “older people said so.” And if there's one thing teens with rebellious tendencies and raging hormones would totally listen to without being given reasonable justification, it's older people, right?

5. Calling sex a “sin” isn't a function of the DOH

Via thedailybeast.com
We get that a lot of people believe that sex outside of marriage is a sin, but determining what is and isn't a sin isn't the job of the Department Of Health. Maybe if the government had a Department Of Morality, they would have been in a better position to talk about sex this way.
A shame about that potential acronym, though.

4. It says absolutely nothing while saying too much.

You want to talk about promoting abstinence or awareness about teenage pregnancy, yet you decide to skirt around the issue by using insipid euphemisms and obnoxious metaphors. So what exactly is the message here? Your target market, teenagers, aren't idiots. You just said so yourself! They're not “gaga girls” and “bobo boys,” so why are you trying to talk to them like they're five years old? In a world where “Two Wives” exists, do you really think playing coy would do your target market any good?
The funny thing is, despite all these euphemisms and metaphors and attempts to make the message as MTRCB-friendly as possible, the ad still manages to be tactless and insulting by calling teenagers who have sex “gaga” and “bobo.” Great job! The only thing people remember about this song is that you called teenagers that, because everything else you said was lost in an endless morass of Bowdlerization that would make Xerex Xaviera very proud.
If you can't explain your campaign without trying to sugarcoat it to the point where none of it makes any sense, then maybe you shouldn't waste your time doing it?

3. This face will haunt your dreams.


2. They probably plagiarized the song.

Are you a fan of K Pop? Well, if you are, then you know this by now: not a few people have noticed the clear similarity between how “GABO” sounds like and f(x)'s “Rum Pum Pum.” You don't believe me? Give a listen for yourself, and tell me that this was all just an amazing coincidence.
Or maybe they paid for the rights for the tune so it wasn't plagiarism at all? Well, if they did, then let's not forget that...

Just like “Bilog Na Hugis Itlog” by the Sex Bomb Dancers, just like #ManyakTatay in the MTRCB ratings commercial, we, the taxpayers, produced the “GABO” ad with our taxes. And while the Sex Bomb song and the MTRCB ads are all pretty annoying, they at least got their respective messages across. This is not what “GABO” did. All it did was to add a patently idiotic song to our nation's history, and taught the teenagers they were hoping would avoid getting pregnant absolutely nothing, except maybe how not to make an infomercial.
This infomercial was every bit as useless as a steak knife in a soup kitchen: you don't get to use it for anything worthwhile, but you end up wanting to stab someone because of how stupid the whole thing is.