8 Movies Showing Tonight That Will Get You Through Valentine's Day 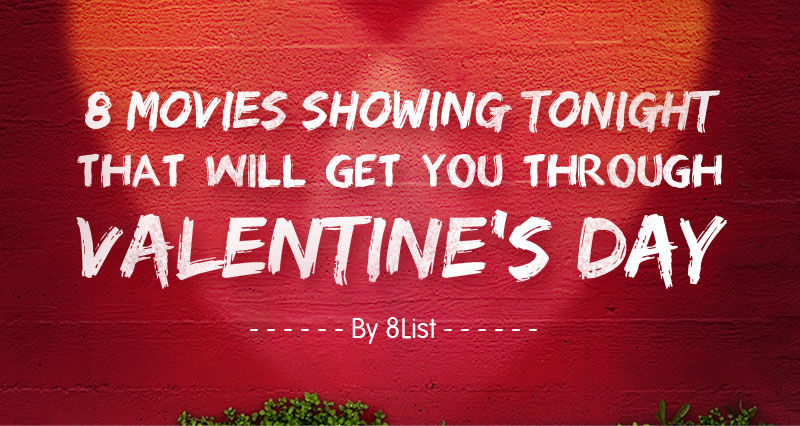 If you're a pair of homebodies who'd rather stay home tonight while hordes of other couples go out for their Valentine's dates (or if you're all alone tonight, and that's perfectly okay, by the way), here's the line-up over at HBO (also available in HD) and Cinemax for movie marathoning!

An ambitious young New Yorker, disillusioned with romance, takes a whirlwind trip to Rome where she defiantly plucks magic coins from a “foolish” fountain of love, inexplicably igniting the passion of an odd group of suitors: a sausage magnate, a street magician, an adoring painter and a self-admiring model. But when a charming reporter pursues her with equal zest, how will she know if his love is the real thing? The cast of WHEN IN ROME includes Kristen Bell, Josh Duhamel and Anjelica Huston.

In this sophisticated romantic comedy, Alex “Hitch” Hitchens is a legendary, and deliberately anonymous, New York City “date doctor” who, for a fee, has helped countless men woo the women of their dreams. While coaching Albert, a meek accountant who is smitten with a glamorous celebrity, Allegra Cole, Hitch finally meets his match in the person of the gorgeous, whip-smart Sara Melas, a gossip columnist who follows Allegra's every move. The ultimate professional bachelor, Hitch suddenly finds himself falling deliriously in love with Sara, a reporter whose biggest scoop could very well be the unmasking of Manhattan's most famous date doctor. HITCH stars Will Smith, Eva Mendes and Kevin James.

Both Pete and Debbie are about to turn 40! With their kids hating each other, both of their businesses failing, the couple is on the verge of losing their house and their already estranged relationship. The film stars Paul Rudd, Leslie Mann and Maude Apatow.

On the hunt for a fabled treasure of gold, a band of warriors, assassins, and a rogue British soldier descend upon a village in feudal China, where a humble blacksmith looks to defend himself, his fellow villagers and their home. The film stars Russell Crowe and Lucy Liu.

A group of friends, led by Paige, is at a turning point in their respective lives. Out of the blue, they find themselves haunted by a figment of their past – a troubled, geeky kid whom they all rejected at a school dance. But he is grown up now and hungry for revenge. Soon, the girls in the group begin to die mysteriously and those who remain are convinced that the killer is the geek. As the mystery remains unsolved, they come to realize that the good ol' school days they remember so fondly were not really so uncomplicated after all.The cast of VALENTINE includes Denise Richards, David Boreanaz and Marlee Shelton.

Ferris Bueller is the class clown who gets away with everything, and the best friend who knows how to show you a good time. FERRIS BUELLER’S DAY OFF stars Matthew Broderick, Alan Ruck and Mia Sara.

A thriller that follows two siblings who decide to fend for themselves in the wake of a botched casino heist and their unlikely reunion at another family's Thanksgiving celebration. The film stars Eric Bana, Olivia Wilde and Charlie Hunnam.

They are known as Porthos, Athos, and Aramis—three elite warriors who serve the King of France as his best Musketeers. After discovering an evil conspiracy to overthrow the King, the Musketeers come across a young, aspiring hero, D’Artagnan, and take him under their wing. Together, the four embark on a dangerous mission to foil the plot that not only threatens the crown, but the future of Europe itself. THE THREE MUSKETEERS stars Matthew Macfadyen, Logan Lerman and Ray Stevenson.