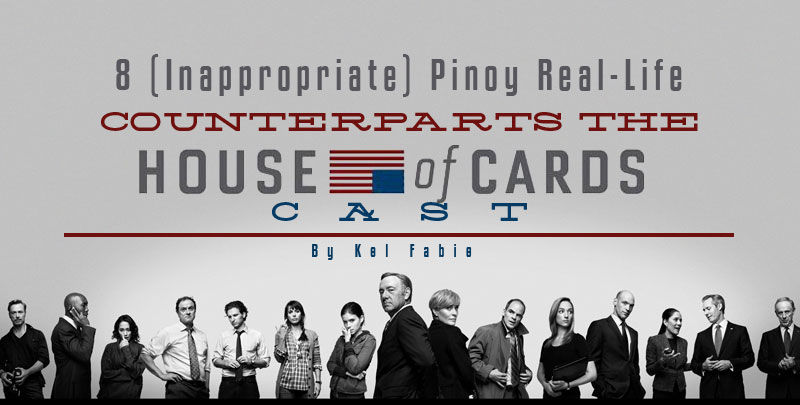 So I just went and binge-watched “House Of Cards” a couple of weeks ago, and I have to tell you, I am absolutely hooked. So hooked, in fact, that I sometimes randomly turn to the side while talking to someone and explain my motivations to a non-existent audience for no apparent reason. But I digress.
I got to thinking about the feasibility of a series like that happening here in the Philippines. Or maybe something like that, period, happening in real life in the Philippines. Who do you think would fit in the role of the ruthlessly pragmatic Francis Underwood? Who would have been great as his long-supportive but conflicted wife, Claire? How about the plucky and ambitious reporter, Zoe Barnes?
Allow me to prove to you why I am not a casting director at all with my 8 picks…

The Character: Linda Vasquez is a very strong and capable woman who works with Frank Underwood but sees through him far better than others do. She's a firebrand when the situation calls for it, and takes no guff from anyone.

Via pinoyfailblog.com
Hey, It Almost Fits! Senator Miriam Defensor-Santiago has always been a firebrand who works with so many different politicians on different sides of the fence. She also doesn’t hesitate to call out anyone on their bull if they get on her nerves.
But Wait… Despite the fact that she fits Linda’s character to a tee, she, unlike Linda, has always had designs for higher office. First, it was the presidency, now, it’s the ICJ. She is far less behind the scenes than Linda ever was, because her sheer gravitas yanks the spotlight in her direction every time she walks into the room.

The Character: Lucas is a newspaper editor and later on, Zoe’s boyfriend. He is persistent and will stop at nothing to get the truth.

Via abscbnpr.com
Hey, It Almost Fits! Like Lucas, Atom is a journalist who really doesn’t stop at anything to get his story. He’s persistent, and according to most women, ridiculously attractive.
But Wait… Atom probably wouldn’t resort to creepy ways to get a girlfriend. That’s a safe assumption to make.

The Character: Powerful, well-liked, but castrated as Vice President, Jim Matthews in Season 1 was one of the key pieces in Francis Underwood’s power plays. The challenge: to convince the Vice President that there’s more to life than being second in command - without gunning for the presidency.

Via filipinoscribe.com
Hey, It Almost Fits! After his term as Vice President, Noli de Castro returned to fine form as a newscaster for ABS-CBN, never missing a beat. Without spoiling anything, that seems pretty similar to Jim Matthews over there, doesn’t it?
But Wait… A key issue that set the stage for Frank Underwood’s power play was the very palpable tension between the President and the Vice President. During De Castro’s term, this conflict clearly did not ever turn up.

The Character: Ever loyal and ever reliable, Doug Stamper is Frank’s right hand man. His unimpeachable loyalty to Underwood has allowed him to see a side of Frank that virtually nobody else ever has.

Via mb.com.ph
Hey, It Almost Fits! Gigi Reyes, for years, has been a loyal aide who has done everything for her boss. She was reliable, and pretty efficient at her job, and she ahem has obviously seen a side of her boss that virtually nobody else ever has. Of course, this in no way means that her boss is also our real-life Frank Underwood.
But Wait… And neither did Frank Underwood have an alleged affair with Doug Stamper. Just saying.

The Character: An alcoholic and drug user, Representative Peter Russo was deliberately groomed by Frank Underwood to run for governor of Pennsylvania, and imploded marvelously. He was an unwitting pawn in Underwood’s long game.

Via johnryanrecabar.wordpress.com
Hey, It Almost Fits! Current Mayor Estrada probably won’t deny he likes a drink every now and then, and no, we make zero allegations about drug use, but when he was catapulted to the presidency and then deposed well before his term ended via EDSA 2, not a few people felt he was a pawn in someone’s long game, too.
But Wait… Aside from the fact that Erap is still happily married (yep) and has well over two children, he certainly never went into hiding when he was called out by the police for supposedly being drunk. The man gives fewer f*cks than a virgin in a Dungeons and Dragons convention.

The Character: Ambitious yet a bit naive, Zoe turned to Frank Underwood to leak him breaking stories to raise her profile in the journalism world. Unbeknownst to her, the “secret” affair she was having with Frank had the blessings of his wife, Claire. She also ended up having a relationship with Lucas Goodwin.

Via ycniuq07.wix.com
Hey, It Almost Fits! Patricia Evangelista is definitely ambitious, and definitely a bit naive, when she was taken for a ride during the whole Faye Nicole San Juan debacle. Not that we’re playing matchmaker here, but it isn’t like hypothetically seeing Atom Araullo and Patricia Evangelista together would make for a repulsive couple, either.
But Wait… Patricia Evangelista, to the best of my knowledge, doesn’t take the MRT. Watch the first episode of Season 2 if you don’t get it.

The Character: Frank Underwood’s wife supports her husband in everything he does, all the way to his affairs. She has a few skeletons in her own dalliances as well, but she completely ignores that when she feels her husband needs her the most.

Via talktalktilaok.com
Hey, It Almost Fits! Well, obviously, in real life, Dra. Loi can’t be married to our #1, seeing as her real-life husband is already #4, but look at how she has tolerated her husband’s dalliances after all these years, while still supporting him every step of the way. You may not like the Estradas politically, but you can’t say a thing about how the patriarch and matriarch put up such a united front no matter what. That’s really what Loi has in common with Claire.
But Wait… I have never heard about Loi Estrada having her own affairs, though. And again, she’s not married to #1. Kinda hard to ignore that.

The Character: As house majority whip, Representative Frank Underwood is a shrewd, ruthlessly ambitious man who knows how to plot and plan to gain power for himself by any means possible. In the span of two seasons, the man has managed to wheel and deal his way into more and more power, and if it meant killing someone along the way, it’s just a small price to pay to get what he wants.

Via esquiremagazine.ph
Hey, It Almost Fits! Ruthlessly ambitious? Check. Shrewd? Check. Wheeling and dealing into power? Check. The good Senator is one of the keenest, most brilliant minds alive in Philippine politics, and he certainly knows how to keep himself in the spotlight and get out of any controversy surrounding him. In his decades of service to the country, few people can deny that short of the presidency, Senator Juan Ponce Enrile has pretty much done it all.
But Wait… Senator Enrile has never killed anyone, right? Right?
Wanna see what we mean? Catch "House of Cards" starting May 28 at 9:55pm on RTL CBS Entertainment Channel (where it will air first and exclusive in our part of the world). It's available on SKYcable channels 53 and 196 (high definition). But if you're not on SKYcable, you can always ask your cable provider about RTL CBS Entertainment.
How do you feel about these counterparts? Please post your reactions in the Comments Section below.