Truth be told, the “Naked” Pinay actresses showing off varying degrees of undress had baby fat, love handles, and big hips. It looked like they did not diet nor took to the gym to tone those muscles--the unflattering clothes they wore with the underwear made them look big! Ah, but such beautiful faces and sexy poses enough to seduce, provoke, and climax! 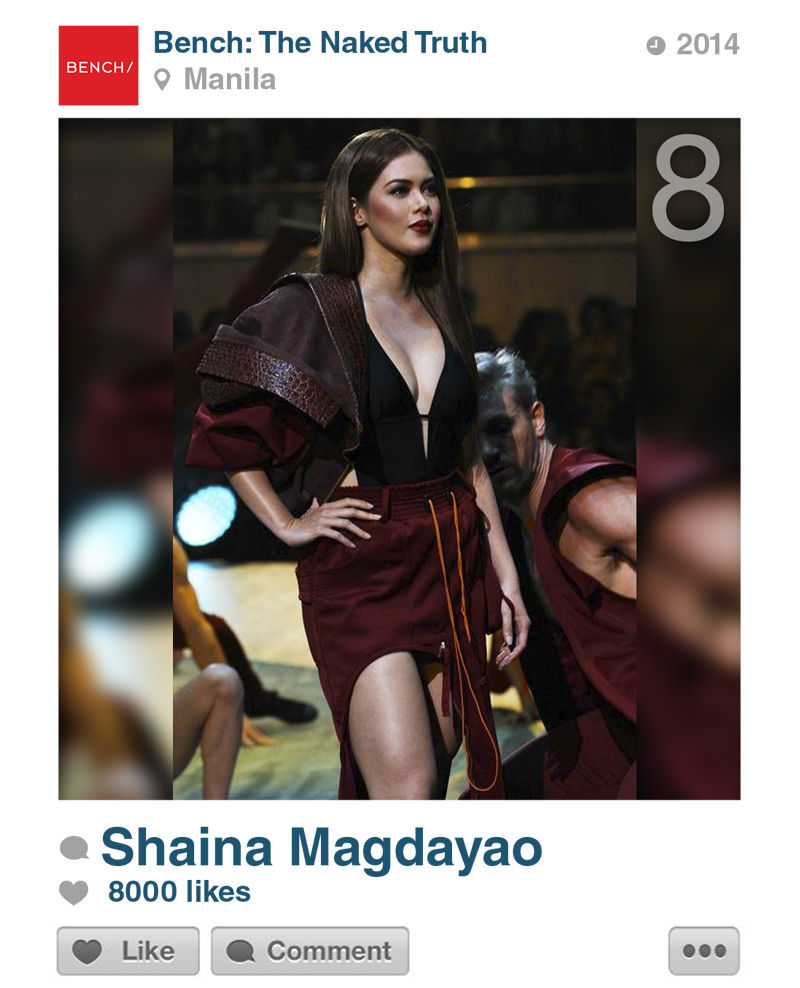 SHAME ON SHAINA - Is she pregnant? Added girth was the red bulky jacket and skirt. Lobotomize the stylist of Bench for this God-awful outfit! 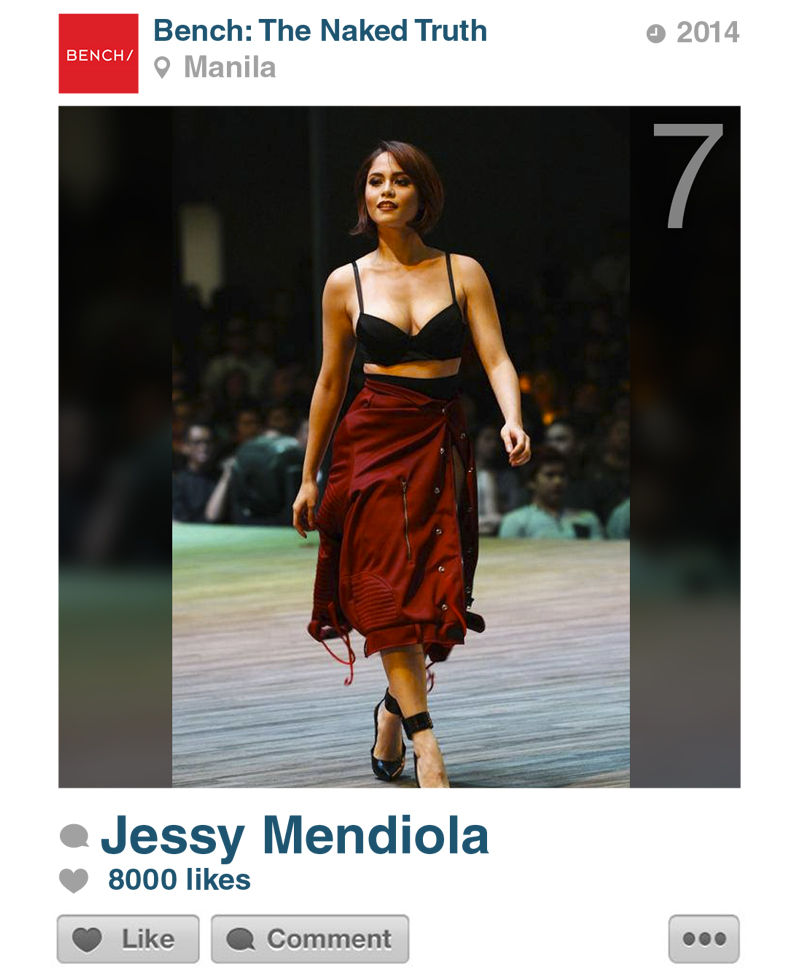 MESSY JESSY - Why is Miss Mendiola wearing a man's jacket upside down as a skirt? Ben Chan should fire this stylist. Are those spanks? Why are her panties so high? But her face and breasts are so beautiful. 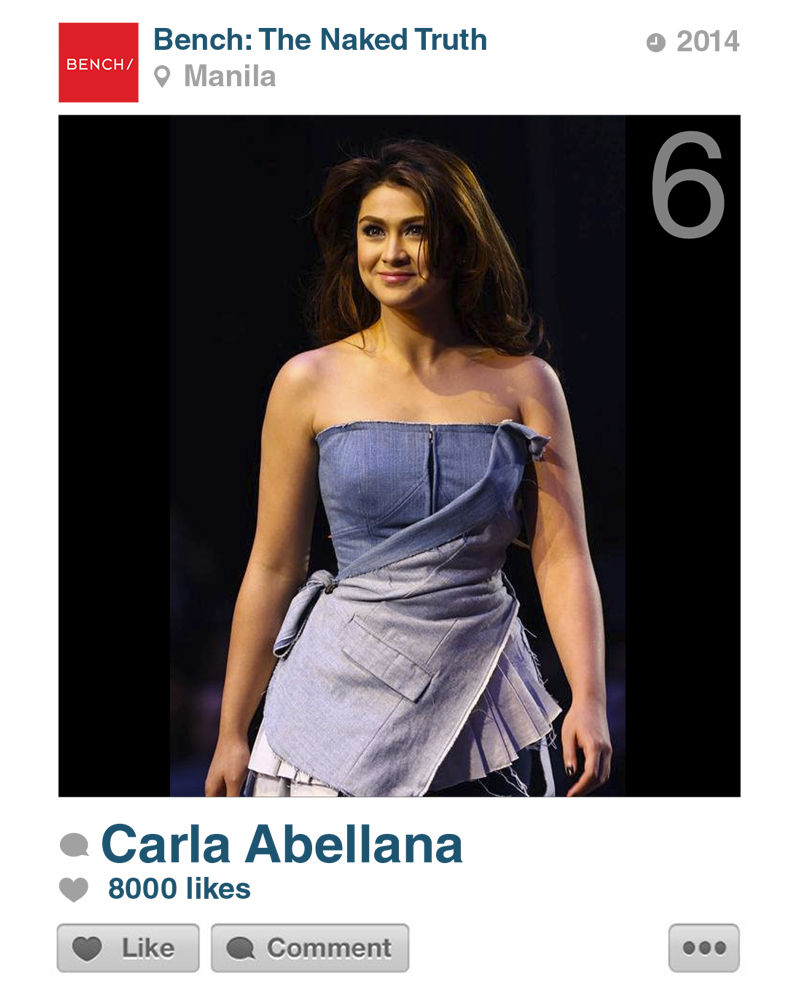 CARLA'S UKAY UKAY - This is trying to be Kawakubo deconstructed 90s look but looks Bahay Kubo faded, dirty, and plain ugly. The stylist was the downfall of the entire show. 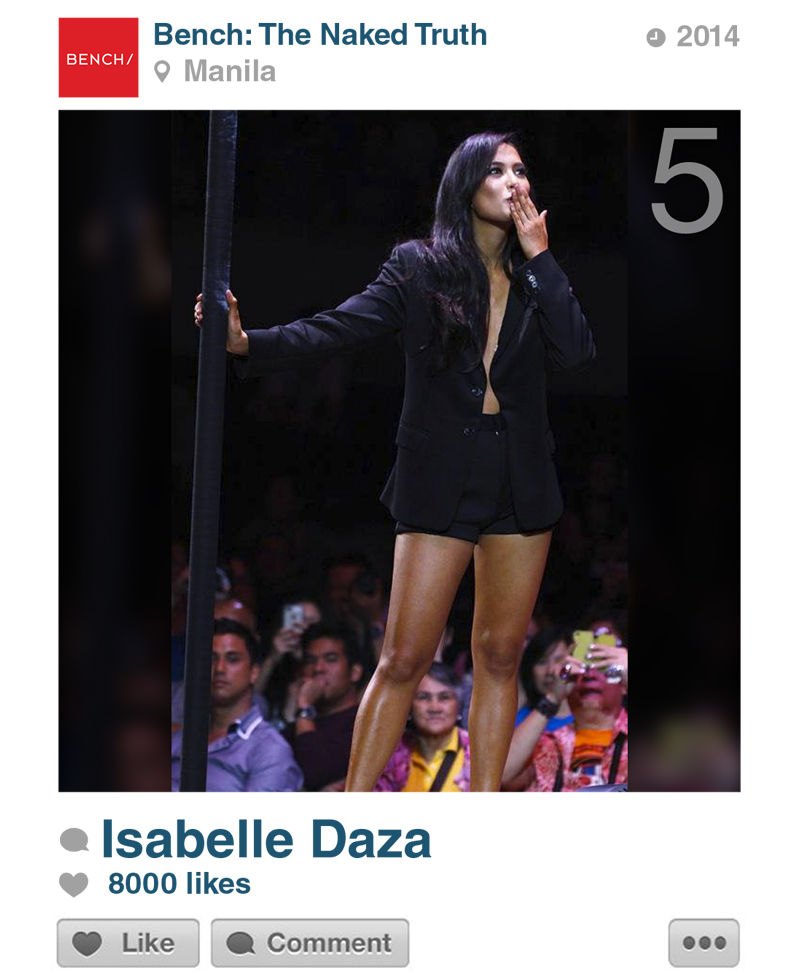 DAZA DOESN'T DAZZLE - Belle cannot follow her mother Gloria Diaz's footsteps and snag a Miss Universe crown that has eluded us since 1973 when Margie Moran won. First, she has no body to speak of because the Bench stylist hid her flabs under her boyfriend's jacket. Second, Belle is overage to join a beauty pageant. 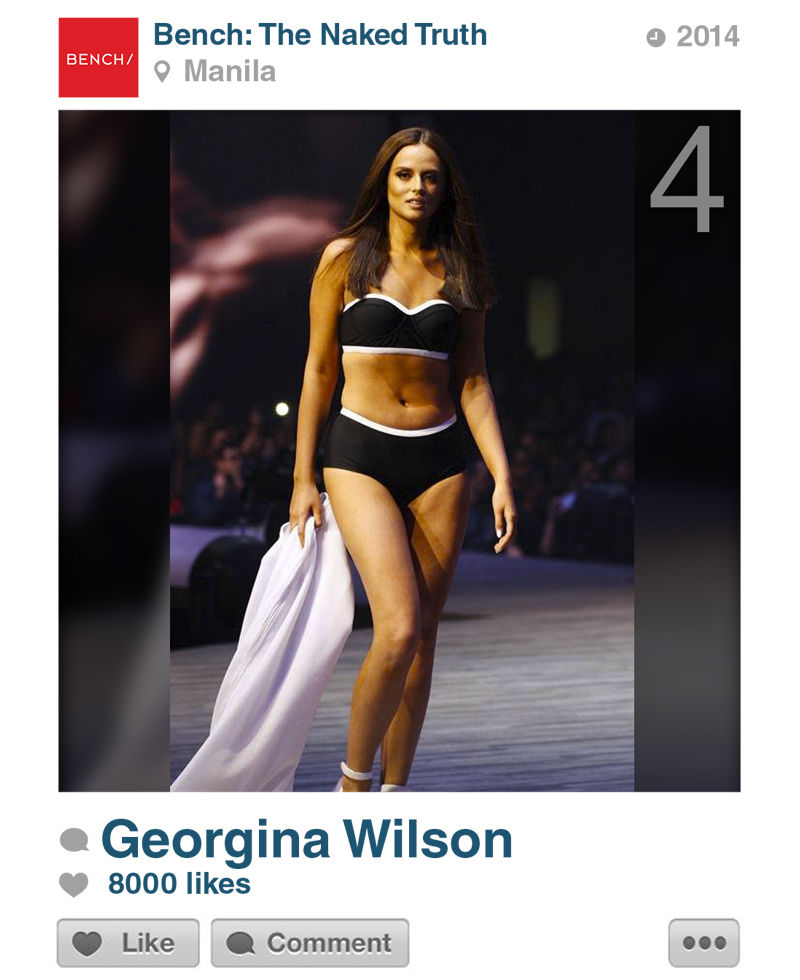 BORGY'S MAIN SQUEEZE - Gorgeous Georgina Wilson has an interesting face. Her look for this show, however, looked a bit androgynous--the un-sexy type. The underwear design is good and will sell. 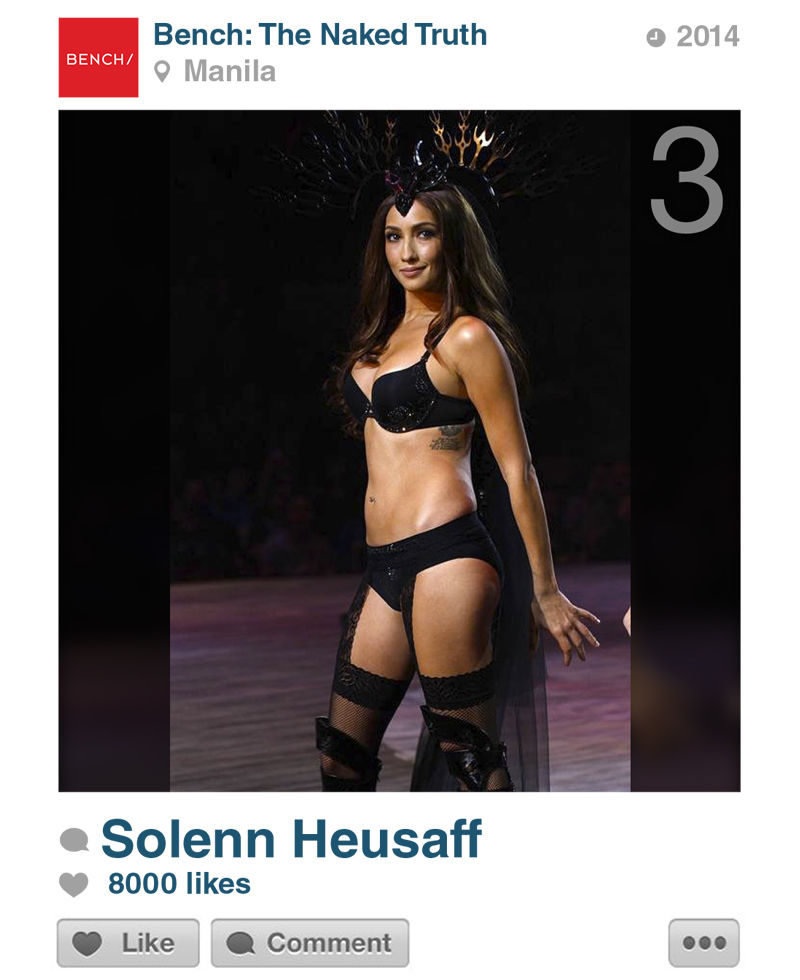 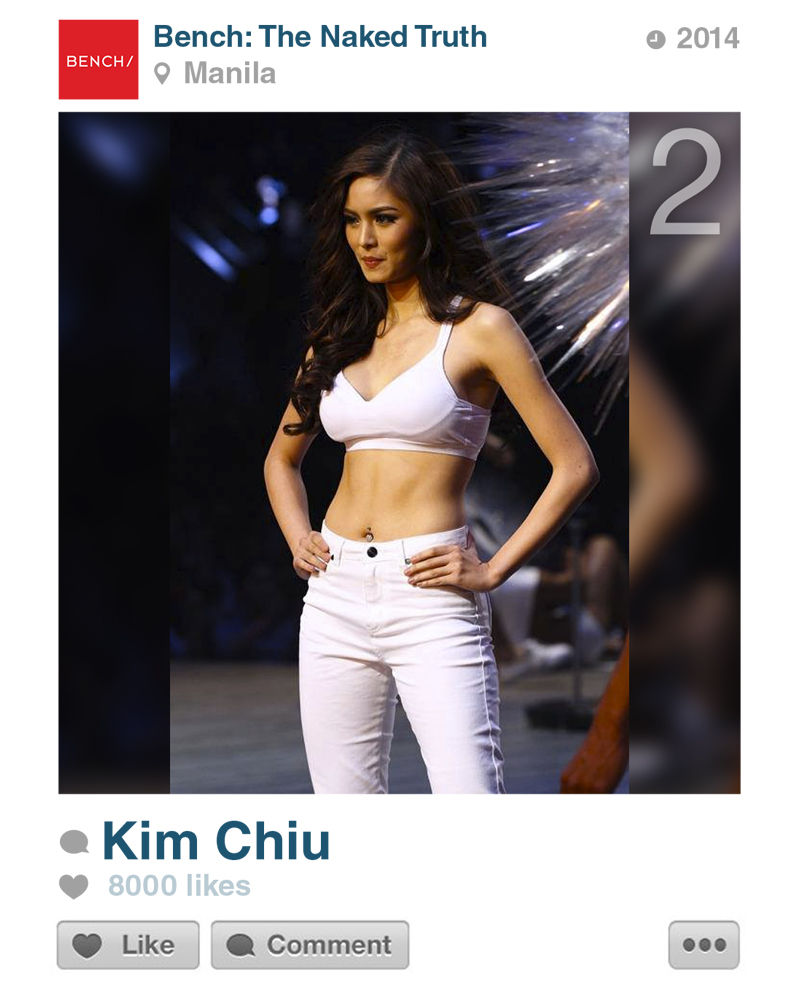 WHITE MISCHIEF - Provocative yet pretty Kim Chiu was the evening’s penultimate star with a mega-watt smile. Wearing a white Bench bra (their most popular, best-selling style ) and high-waisted denim jeans by Bench. Hair and make-up was flawless, and the no-accessories style worked. Fresh! 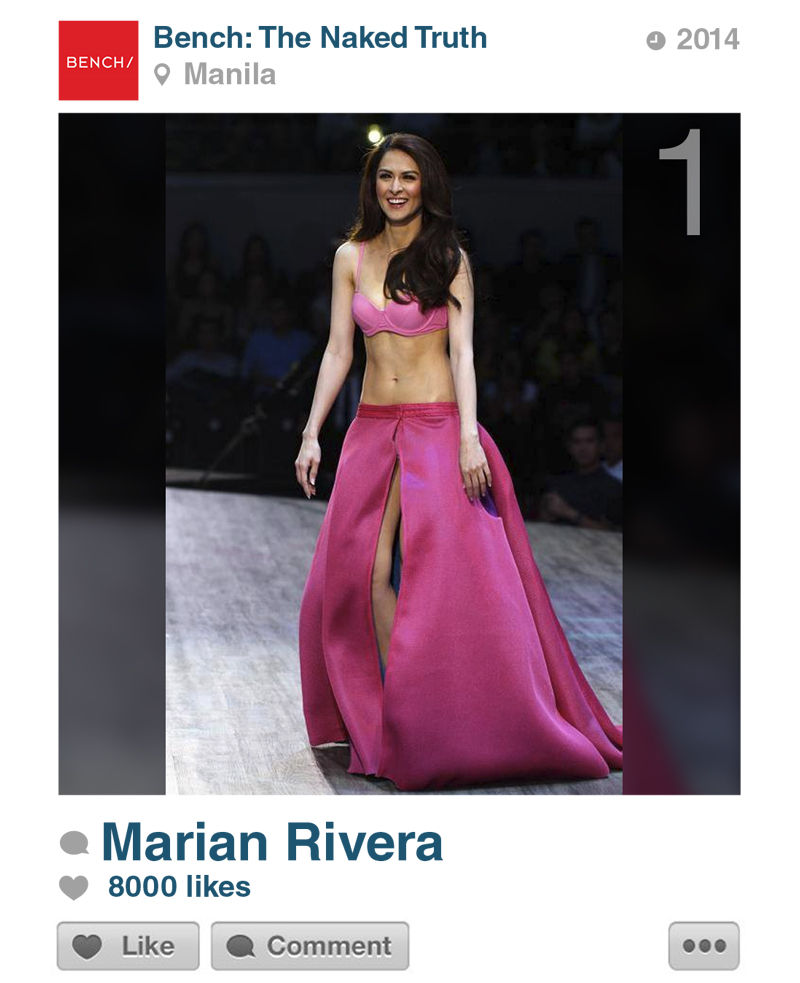 MARRYING MARIAN - Miss Rivera was the superstar climax of the show. Again, I have an issue with the stylist: look at the waist band and the badly sewn crotch area; it is uncool and uncouth. No class for such a drop dead gorgeous face and figure. Marian went to the gym and did a diet, and how glorious it shows.