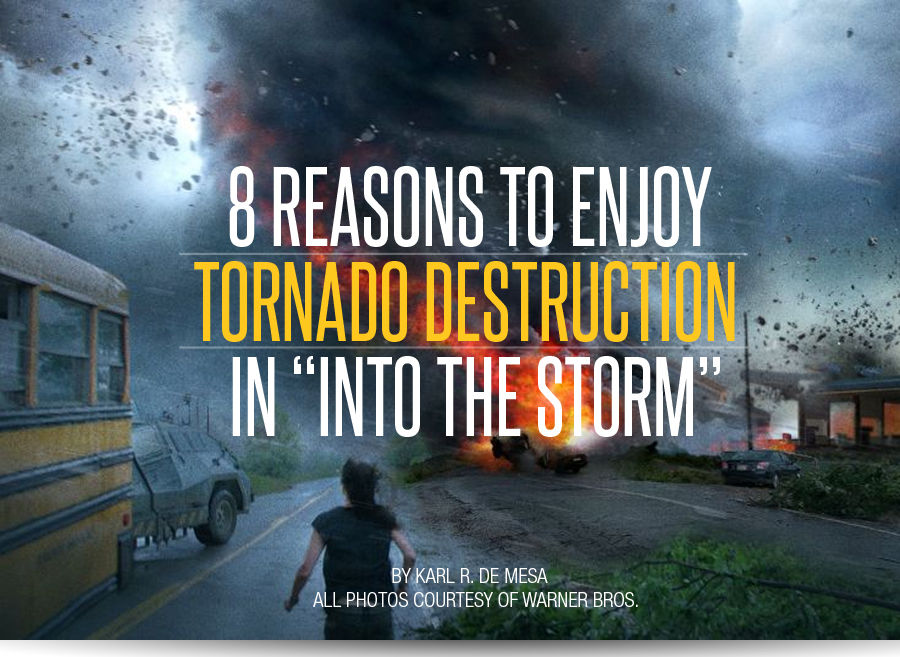 [dropcap letter="A"]h, disaster movies. There’s a real art form to this specific genre where the characters and plot are basically sublimated into the unapologetic and lovely spectacle of destruction of a tsunami, a forest fire, a volcano, or a helluva lot of tornadoes---like this wet and windy movie.
The audience doesn’t really expect much aside from balls-to-the-wall obliteration, the only judgment being how well you can convey said marvels of freakish weather and top each succeeding scene.
Director Steven Quale and co appreciate this situation and play their tactics aptly, which is very likely why the promo posters and teasers for Warner Bros.’ “Into the Storm” feature very little of the stars or, if they do, the huge twisters dwarf them like elephants to flies.
Still, the basic premise and conceit of this movie is that the tornado weather in the American Midwest town of Silverton is about to become very very hairy with multiple appearances and marriages of the tornadoes to form a super-twister of astronomical proportions. One might, in ancient days, say this town is especially cursed. But never mind that Bible Belt, chest thumps.

The inventive twist here is found footage. Through this medium we follow three groups: Vice-Principal Gary Morris (Richard Armitage) and his sons Jacob (Jeremy Sumpter) and Trey (Nathan Kress), who provide strapping young eye candy for the ladies in attendance; Prof Allison Stone and her cadre of professional storm chasers; and the duo of thrill-seeking local rednecks and self-proclaimed DIY Twista Hunterz who are all at once fearless, idiotic, and hilarious.
The conflict between and inside these groups provide some human backdrop to the oncoming slaughterhouse of wind and sleet rampaging through five states, but they’re mostly appetizer for the glory of the main event: super cyclones ripping up everything not nailed down and everything nailed down plus the soil it’s standing on.
It starts slow and you can expect the establishing storylines to almost be like rubbish against the high winds but as the event horizon of cyclones loom, thing get better and then better just gets its roof ripped off like tissue.
In the span of one day, the small American town of is ravaged by an unprecedented onslaught of tornadoes. The entire town is at the mercy of the erratic and deadly cyclones, even as storm trackers predict the worst is yet to come. Most people seek shelter, while others run towards the vortex, testing how far a storm chaser will go for that once-in-a-lifetime shot.
It’s Mother Nature at her most extreme and the scenes you expect are nothing less than an electrifying buzz of visual adrenaline. Disaster movie junkies will love this. 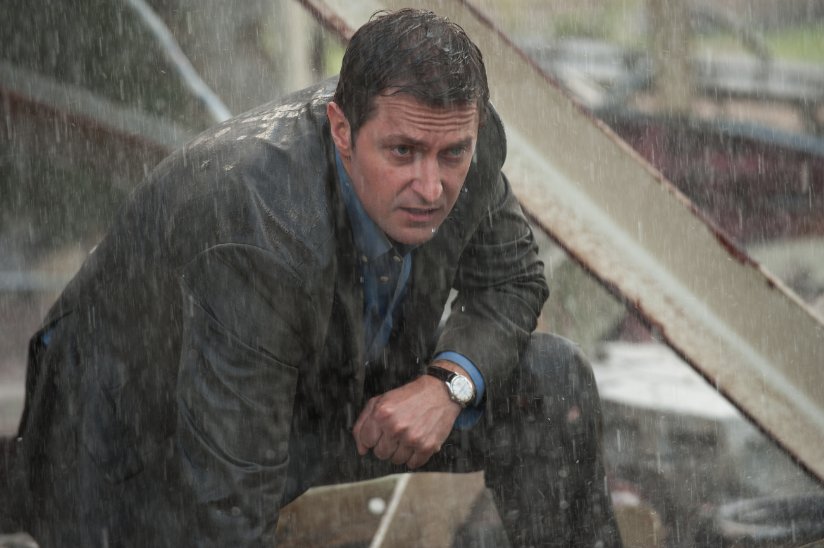 Dwarven warrior Thorin Oakenshield came straight from New Zealand to shoot the twister film: “Yes, I came straight from The Hobbit movies to do this—the flight was my break.”
Armitage sports an awkward American accent and stars as Gary Morris, the vice-principal of the community Silverton High School and father of two teenage boys, who over the course of the story’s roughly eight-hour span has to fight to get his high school graduating class to safety and also find his son, who is trapped in the storm.
“It’s difficult to prepare for a film like this,” Armitage said. “Even after studying the script and doing your work, you walk on set and run into an unpredictable set of circumstances. The tornadoes in this film are extreme and the way they are creating the effects is extreme too. Just trying to stay on your feet and keep your eyes open isn’t easy. But I like that! I like walking into a scene thinking it’s going to be one thing and then seeing how it gets turned on its head. It becomes a bit of an endurance test, which is great.” 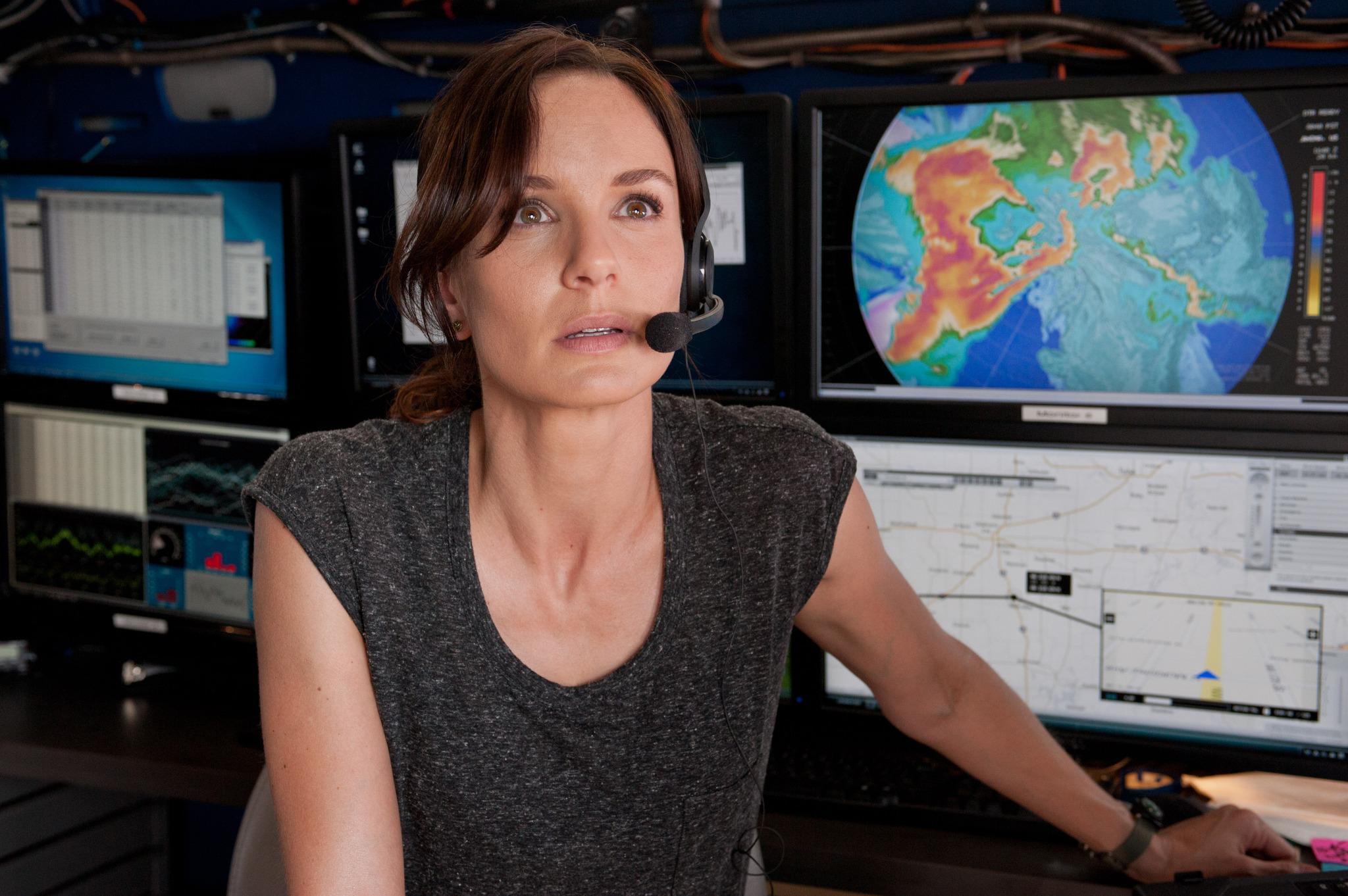 See Lorie Grimes fly!
“The Walking Dead’s” Sarah Wayne Callies plays professor of climatology and meteorology Allison Stone, who is with the storm chasers as a scientist, not a thrill-seeker, leading her into conflict with veteran storm-chaser Pete (Matt Walsh), who thinks the game is one of instinct and not, as Dr. Stone thinks, one of data.
“This is Allison’s first season studying what these guys chase year after year,” Callies explained. “So, she is on the fence as to whether or not they are doing something legit or are just mavericks. She also has a young daughter back home. This is the first time Allison has been away from her, and there’s a real risk that she won’t be coming back.” 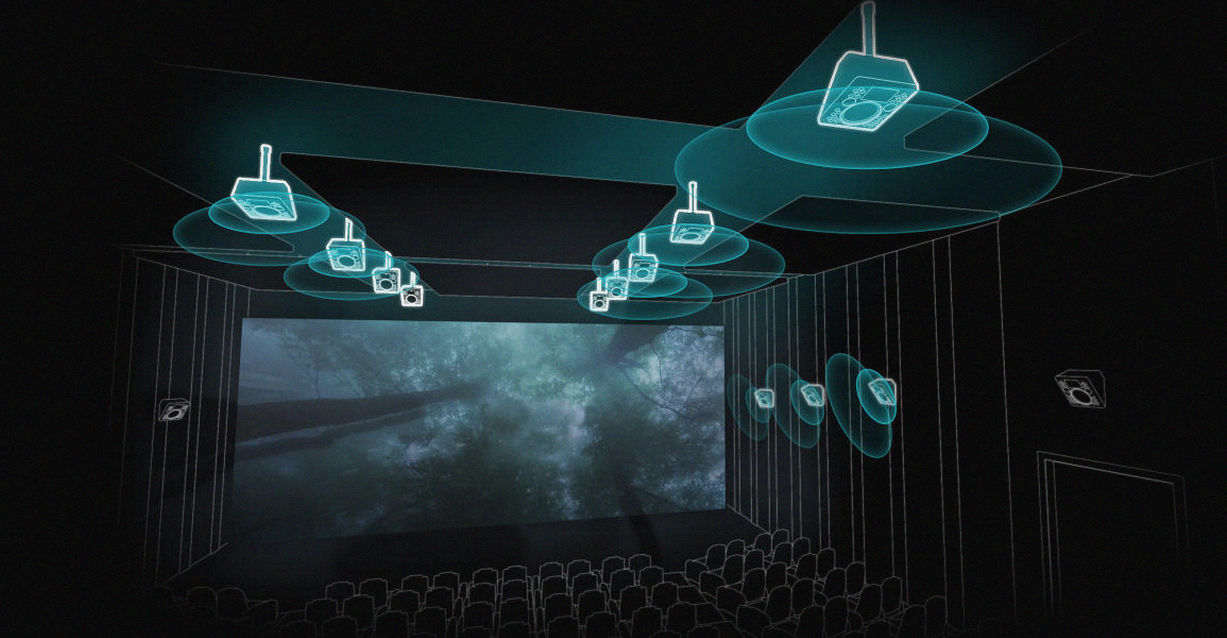 We watched this one at the Greenhills Theater with Dolby Atmos, and the layered approach to sound design really made a difference in the viewing and how much the tech takes you inside the scenes.
Says the tech on the Dolby Atmos site: “A Dolby Atmos soundtrack starts with a base layer that consists largely of static ambient sounds, mixed using the familiar channel-based method. Layered on top of these are dynamic audio elements that can be positioned and moved precisely to correspond to the images onscreen. Metadata records how these elements should behave during playback—behavior that best matches the director's intent, regardless of theatre configuration. This dual-layer approach gives film creators greater power and freedom while ensuring you have a consistent experience in any theater.”
I have no idea what that means but I know I enjoyed myself when I “felt” the sound of sleet falling from overhead and the buffeting winds screeching with the left to right and vice-versa pan. 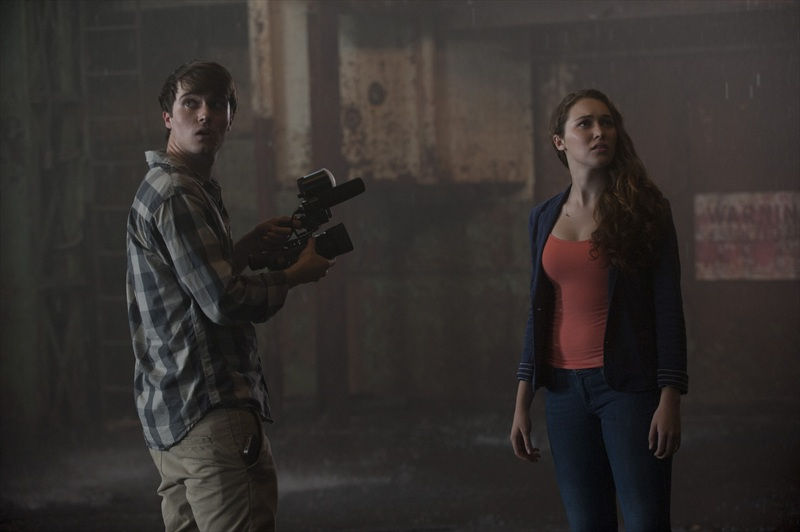 Ah, teenage crush. How it develops into love in a disaster is a thing of plot jumps and loopholes. Nevertheless, the pretty Kaitlyn (Alycia Debnam-Carey) and Jacob (Jeremy Sumpter) represent the unexpected fourth side of this disaster as they are trapped in a ruined warehouse trying to film a school project. 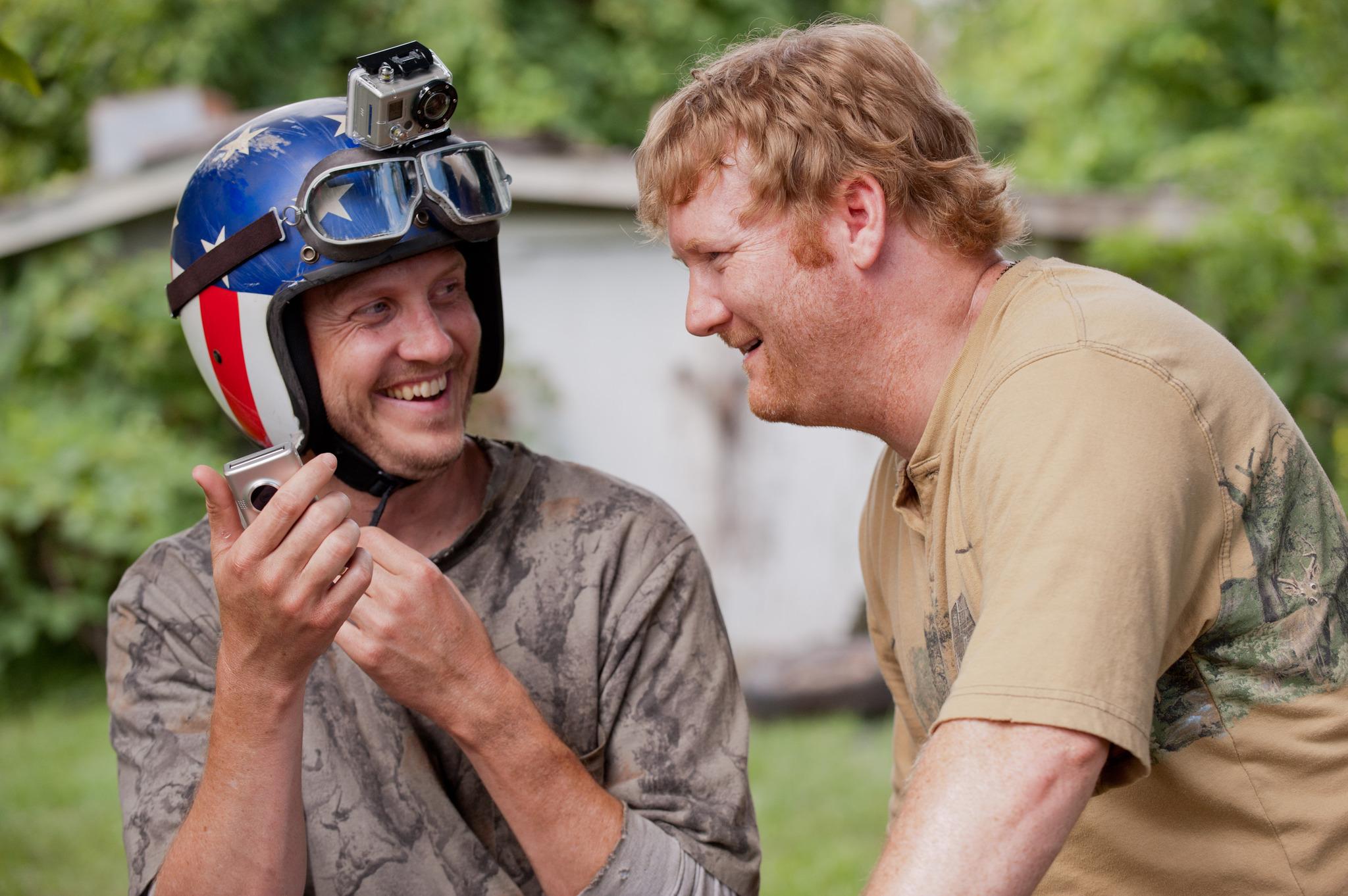 In any thrill-seeking trade there will always be wannabes and amateurs. The redneck duo of Donk (Kyle Davis) and Reevis (Jon Reep) not only provide another perspective to the whole pro and non-pro storm chasing perspective, since they film with camphones and pocket digicams and get around in a battered old pickup, they also show us how adrenaline junkies ignore imminent danger while relying on just their fortitude and guts. 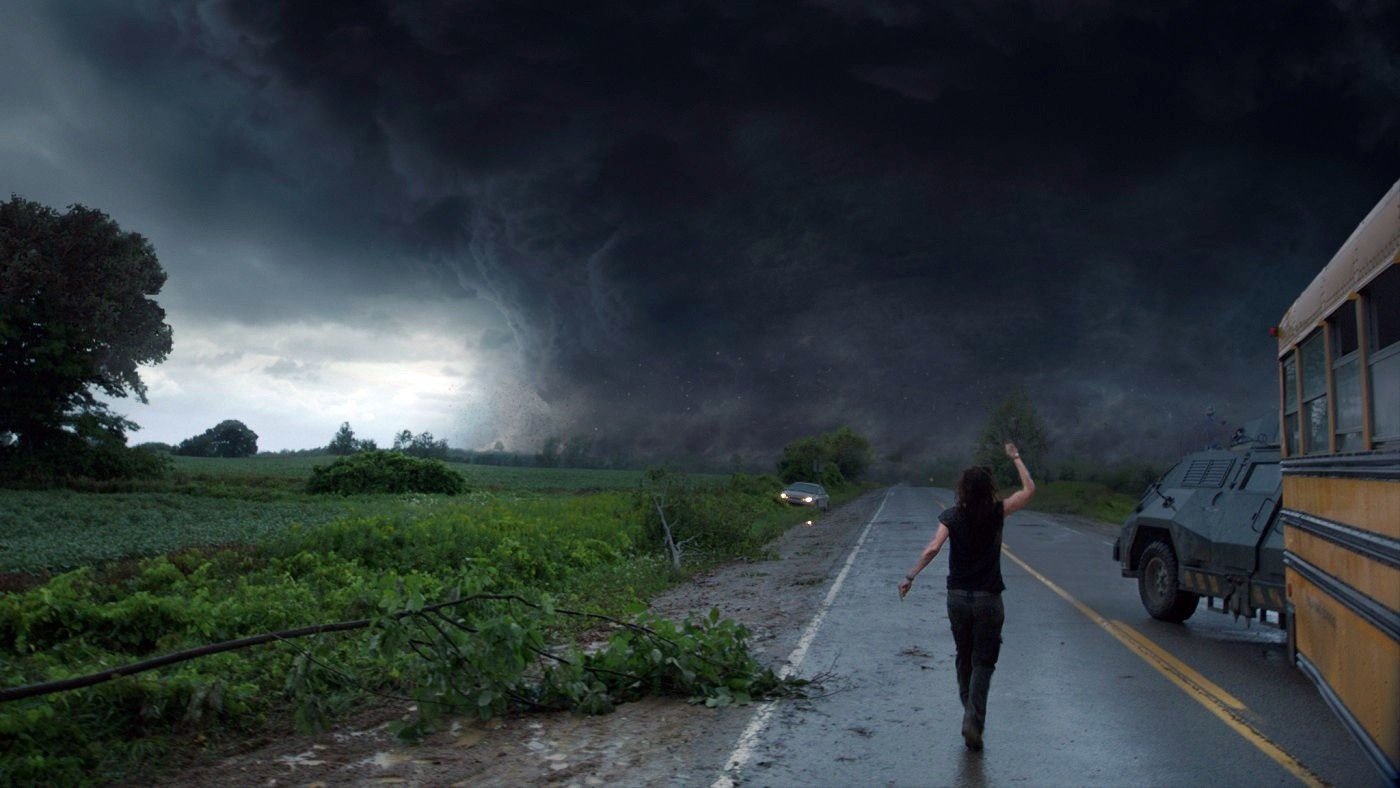 Yes, there are allusions to 1996’s “Twister” as well as hellish, golf ball size ice balls and sleet. The weather that announces the arrival of the tornadoes is malicious as well as hurtful.

One of the stars of the movie is the Titus, the name of the converted vehicle that transports the crew of Pete and Dr. Stone. Equipped with a dozen cameras as well as a sun roof converted into a swivel cam cockpit, the tank also has reinforced steel chassis as well as stabilizing pinions like those used by line repairmen. The real Titus is a converted Dodge pickup truck that was made especially for the movie. It was a bitch to drive, said the prod crew, being 15 feet wider than a normal car.
"Titus is a giant super military tank of a vehicle," said director Steven Quale. "It's specially built to film tornadoes at close range. And its wedge shape keeps it from getting lifted over." 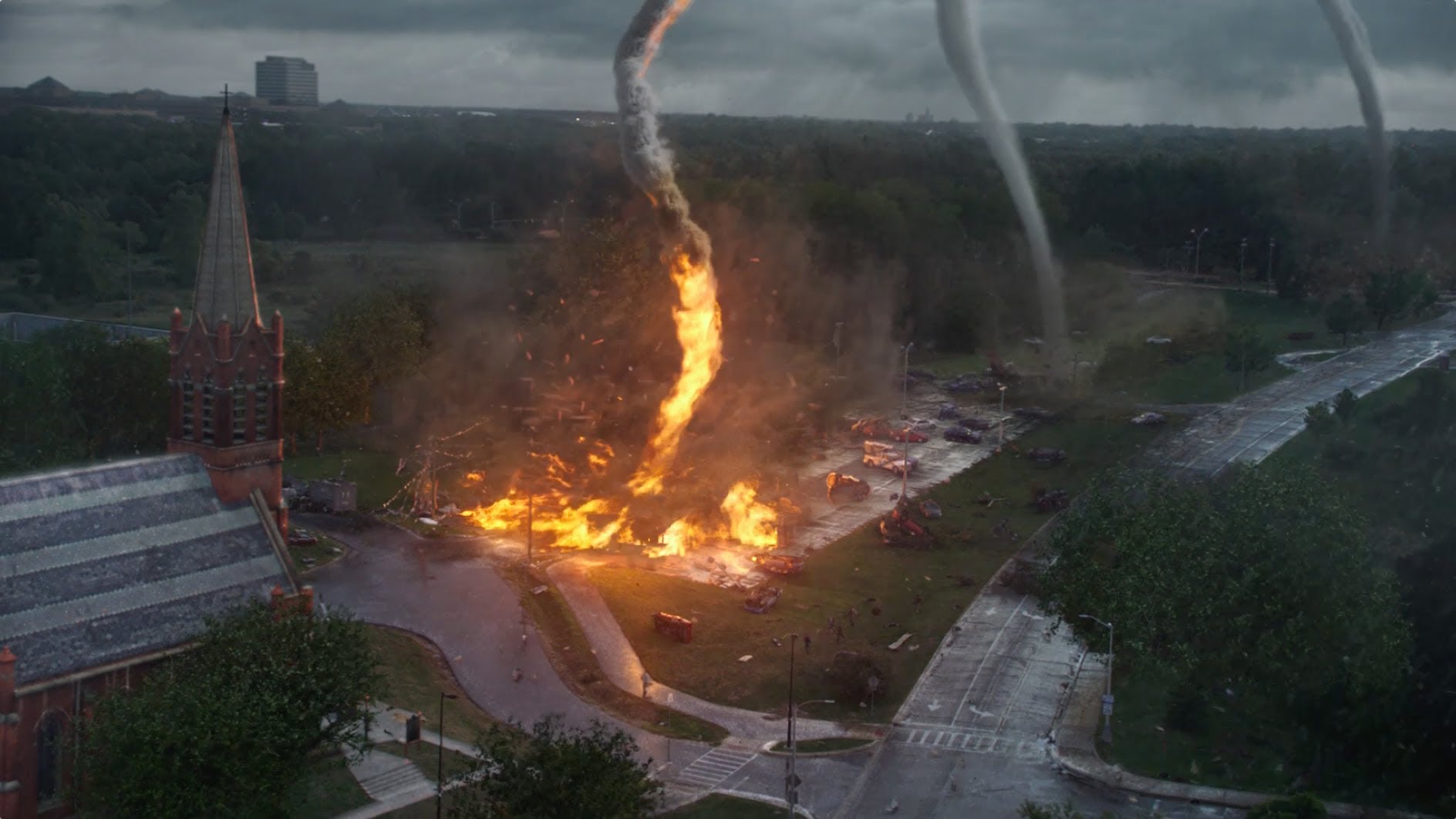 The center pieces of the film do not disappoint as they multiply, rip, and then fuse into one giganto-twister. Will make you want to never go to the American Mid-West, ever.
“Into the Storm” is currently showing in major theaters and is distributed by Warner Bros. Pictures, a Warner Bros. Entertainment Company.