8 Museums Inside the Walled City of Intramuros You Should Visit 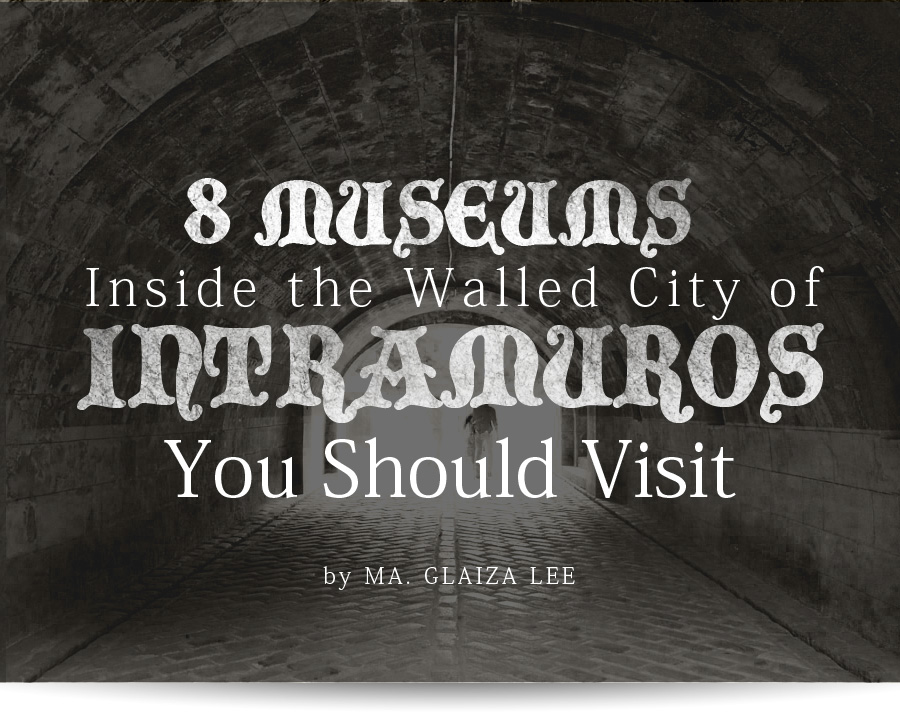 [dropcap letter="Y"]es, we all know about the Walled City of Manila. Intramuros is home to the famous Manila Cathedral, the historical Fort Santiago and the panoramic Baluerte de San Diego, among other tourist destinations.

Inside its walls, tourists can ride a kalesa (horse-drawn carriage) and fall in love with its old world charm. Walk down the romantic, cobble-stoned pathways and pay a visit to the 400-century old San Agustin Church. Or perhaps, search for courtyards and become an Ilustrado.

Within its many streets lie several hidden treasures---museums that preserve and promote Filipino heritage and history. Visit these 8 museums inside the walled city to have a glimpse of the past. 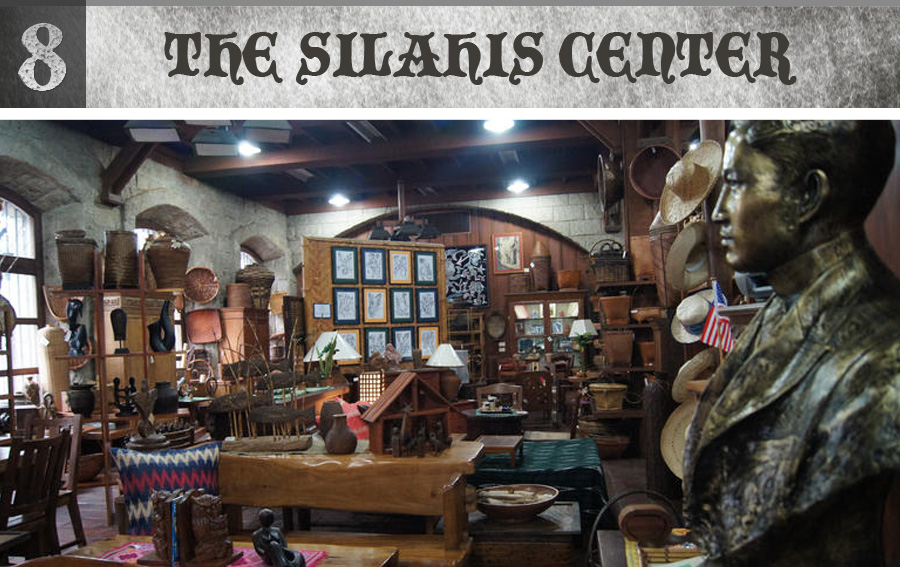 Located in a two-storey bahay na bato, Silahis Center is more than just a shop selling Filipino local handicrafts. With its museum-like ambiance, the center is dedicated to creating a deeper understanding and awareness on the diverse and rich heritage of the Philippines. Inside,tourists can see traditional artifacts and cultural crafts that complement the contemporary crafts and accessories.

The center has four different sections: the Silahis Arts and Artifacts which showcases cultural artifacts, fine crafts and folk art; the Chang Rong Antique Gallery which displays oriental ceramics, maps, textile and primitive art; the Tradewind Books which features old and new cultural publications from the Philippines and the Asia Pacific; and, the Galeria de las Islas which exhibits fine arts, prints and sculptures. The fusion of the old and new expresses the eclectic Philippine life.

7. THE BONSAI LIBRARY AND MUSEUM 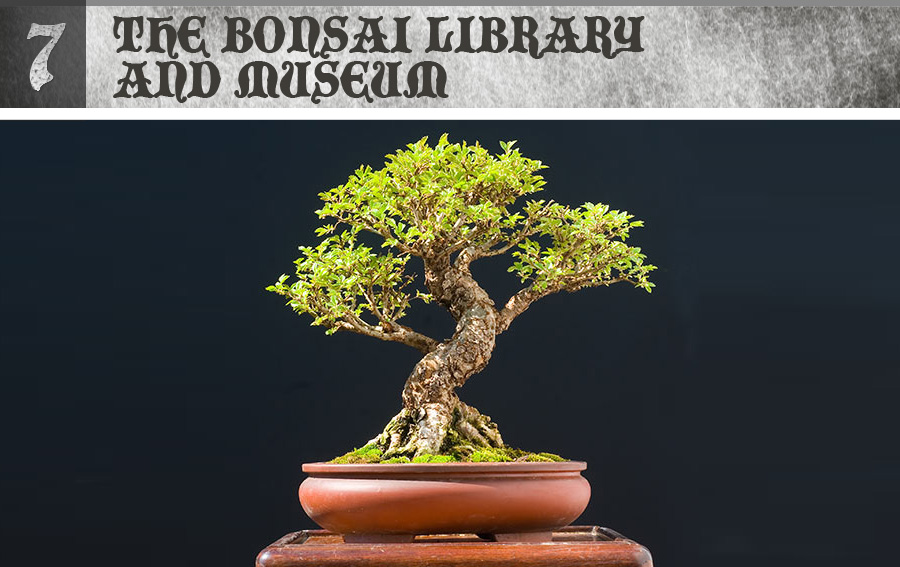 Don't know what a molave or sampaloc tree look like? Get to know them and other Philippine fauna at the Bonsai Library and Museum. 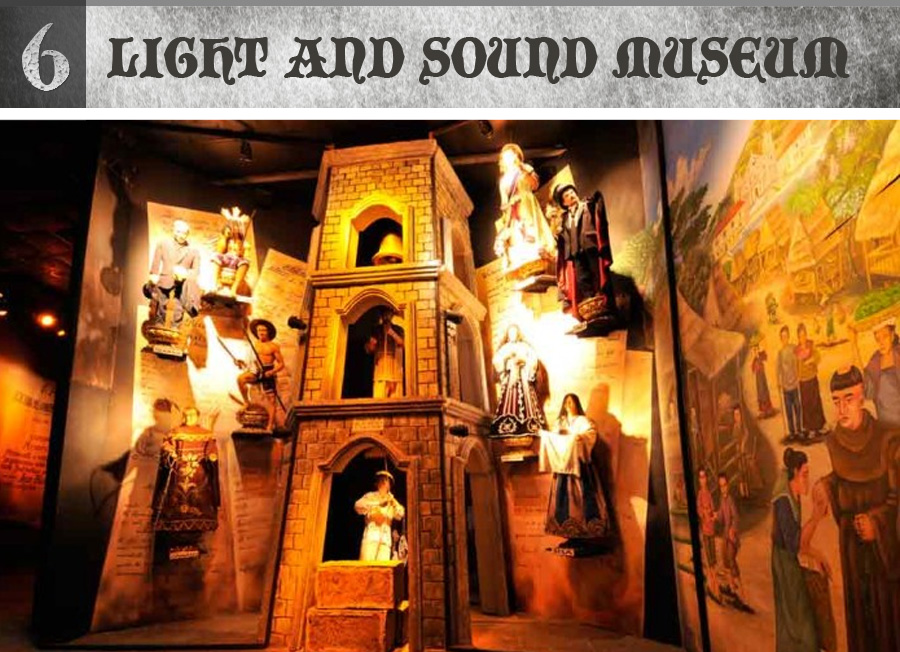 Journey back to the time when the Philippines was still under the Spanish rule through the Light and Sound Museum. The museum uses digital images, sounds and animatronics to give a short historical lesson. The historical performance is situated in a building whose façade is reminiscent of the Beaterio de la Compañía de Jesús which stood on the site until its destruction during the Second World War.

Make sure to go here in a big group because it is much cheaper. Smaller groups may be charged a little more. 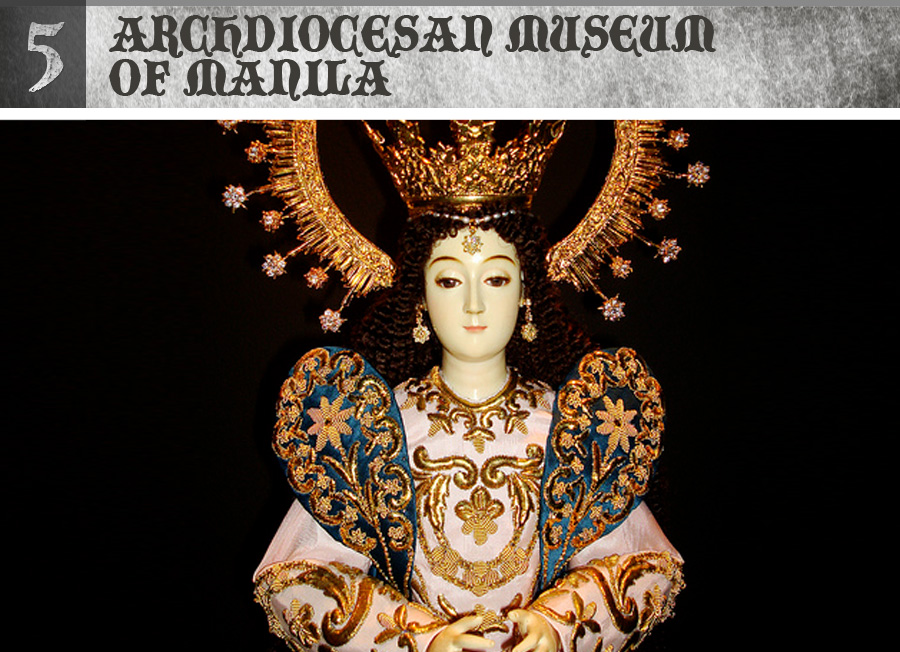 Established by Jaime Cardinal Sin in 1987, the Archdiocesan Museum of Manila is a private museum which revolves around the history of the Catholic Church in the Philippines. The organization behind it believes that the history of Catholicism is connected to the history of the country, and its artistic and historic collection is rich in historical and cultural heritage of the Filipinos.

The museum contains an exhibit of ecclesiastical art and regalia that explain the history of the archdiocese as well as different antique and liturgical items. 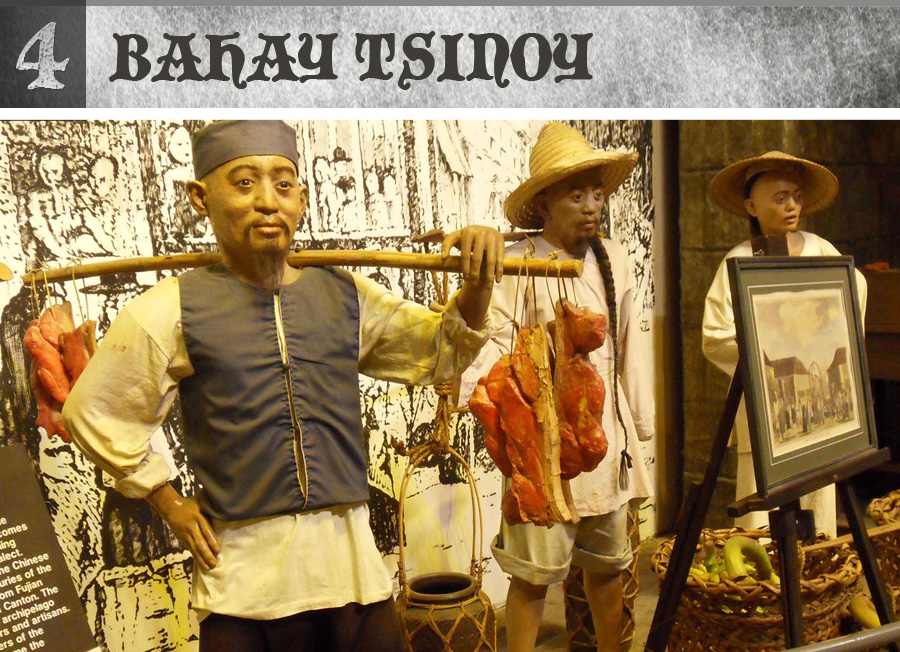 Dedicated to the largest immigrant group in the Philippines, the Chinese, the Bahay Tsinoy recreates the Parian (now known as Chinatown in Binondo). The museum has wax figures that depict the struggles of overseas Chinese workers, which resembles the life of the overseas Filipino workers. In the museum, guests will learns how the Chinese people built a marketplace in Binondo and blended among the Filipinos through intermarriage over the past centuries. 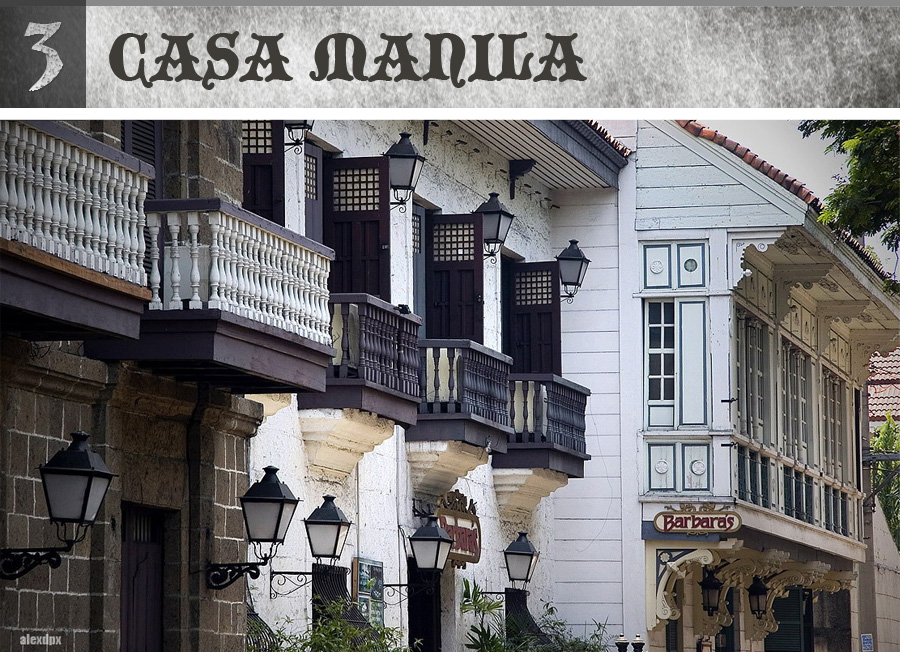 Want to know how Ilustrados lived during the Spanish period? Head to Casa Manila Museum. Recreating the life of the Filipino elite class during the 17th and 18th century, the museum shows the influence of Spain’s opulent lifestyle among the native Filipinos. More than just a walk through of the various artifacts and antique memorabilia, Casa Manila aims to revive Filipinos’ buried past and preserved the country’s rich history.

Governed by the Intramuros Administration, the museum building has a baroque design, with ornate high ceiling, Castilian flooring and Victorian wood furniture. Like the other houses in Plaza San Luis Complex, the casa has commercial establishments on the ground floor and residential areas in its upper floors. 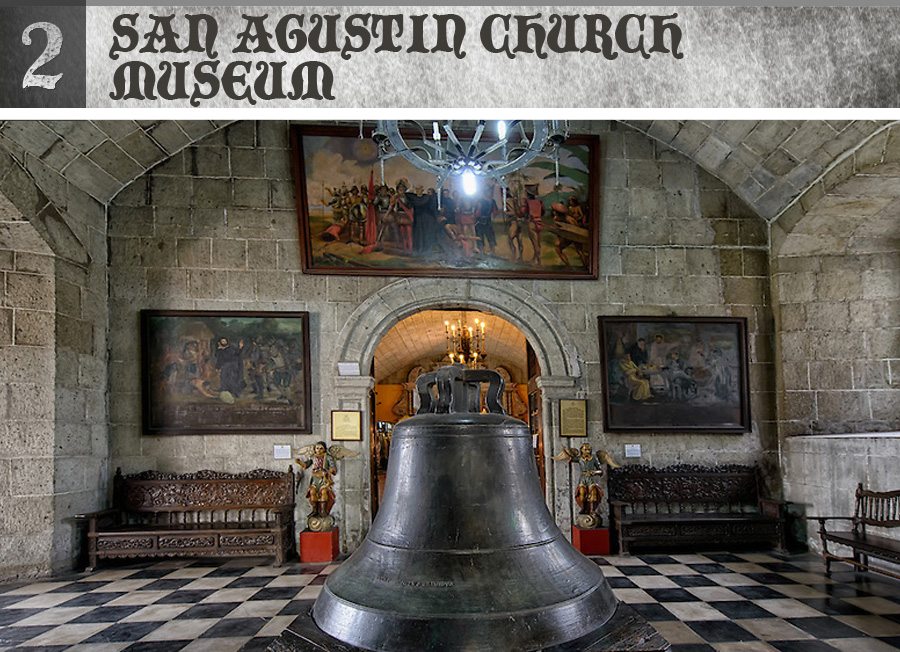 Another museum that gives a crash course on the prevailing religion in the Philippines is the San Agustin Church Museum. Connected to the centuries-old church through a passageway from the balcony, the San Agustin Museum preserves the church’s ecclesiastical relics and artworks such as wooden and ivory statues, Dominican paintings and sculptures, renditions of the galleon ships, the church’s 3400-kilogram bell and other architectural emblems of Spanish Catholicism.

While you are at it, you might want to also take a look around the San Agustin Church, a UNESCO Heritage Site. It has Spanish baroque architectural and Dominican influences that were quite prevalent during the Spanish regime. It also has some touches of Filipino and Chinese designs as evident in the octagonal-shaped, gold-gilded linings and pineapples decorating the pulpit. Italian artisans also incorporated trompe de l’oeil on the ceiling.

Having survived many bombings and weathered earthquakes and other natural calamities, its walls are testament to the rich Filipino history. Probably the main highlights of the tour are the is the bamboo organ, featuring a five-organ piano, on the church’s balcony and the mausoleum at the rear left of the church altar which houses the remains of Miguel Lopez de Legazpi, the Spanish Governor who named Manila as Spain’s colony. 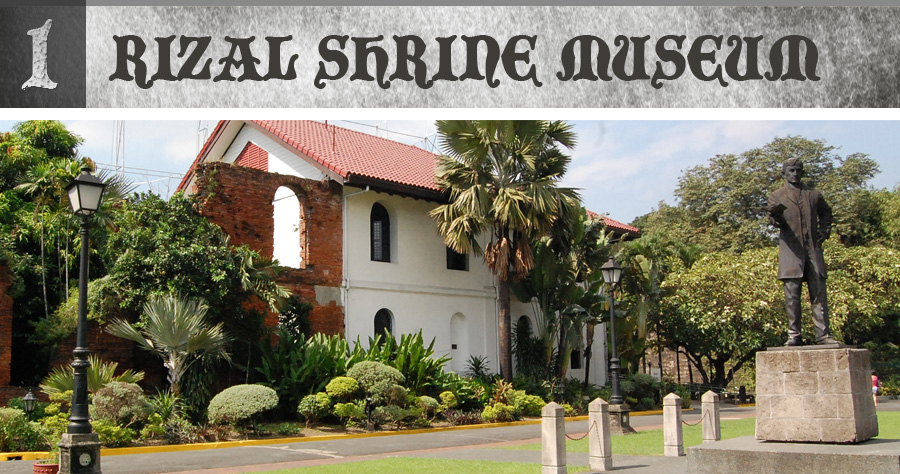 Located inside the Fort Santiago, the Rizal Shrine Museum is a two-storey building dedicated to the life and heroism of the Philippine national hero Dr. Jose Rizal. The building, which contained Rizal’s prison cell, originally housed the artillery companies of the Spanish army. The cell on the ground floor was the barracks pantry. Like the rest of the fort, it was destroyed during the World War II and was later reconstructed in 1953 to become the museum.

Upon entering on the first room in the ground floor, one can see a mural by National Artist Carlos “Botong” Francisco depicting the Philippine hero’s execution. In the Chamber of Texts room, one can see excerpts of Rizal’s works engraved on metal plates and other personal artifacts including his ophthalmologic instruments.

At the Garden Gallery is the small, windowless cell where Rizal was imprisoned. It has a life-size statue of Rizal sculpted by National Artist Guillermo Tolentino. History has it that this was where Rizal saw his mother for the last time and gave to his sister Trinidad the alcohol burner where he hid the last poem he had ever written, the “Mi Ultimo Adios” (My Last Farewell).