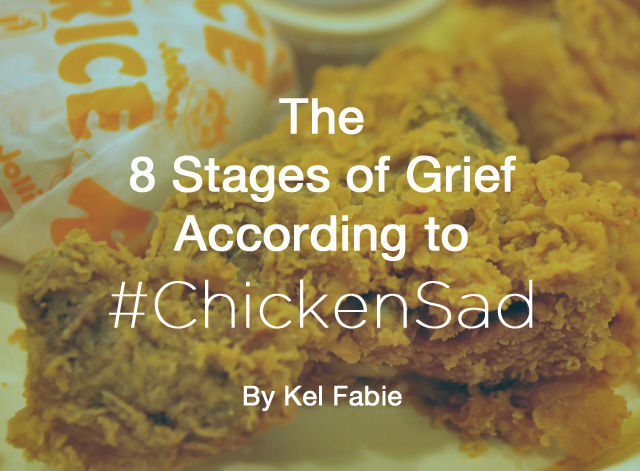 Due to a system update, several branches in Jollibee ended up not having Chickenjoy and other popular menu items available for people the past few days.
Joni Mitchell's "you don't know what you got 'til it's gone" never seemed more palpable than now.
Thanks to the trending #ChickenSad hashtag, we’ve managed to capture some of the various stages of grief in the nation, brought about by this national tragedy.

Characterized by: Snarky remarks about the lack of chicken. Failing diplomatic sarcasm, outright cursing and threats of running to the competition that sound emptier than a room filled with Chicser fans who have good taste in music.

Not really affected by the #ChickenSad situation 'cause I go to Jollibee for the burget steak anyway. Hahaha — Christian Cruz (@XtiansPanaderia) August 9, 2014

Characterized by: Pretending life is completely unaffected because there is no Chickenjoy, but it is. It totally is.

“@KFCPhilippines: No such thing as #ChickenSad in the house of #SoGood pic.twitter.com/dFoi5GXgsp” you just have to wait 20 mins each time.
— Jonathan Dela Cruz (@cabagona) August 9, 2014

Characterized by: shifting blame to other completely uninvolved parties. That is so bad, guys! Don't do that.

Selling chickenjoy for P500 a piece. Extra gravy for P100. Call me if you need a fix. #ChickenSad #BlackMarketJollibee
— Gino Rosales (@ginorosales) August 9, 2014

Characterized by: Buying and selling Chickenjoy on the black market, because some people are half serious when they say "name your price" just to get their crisyplicious, juicylicious fix.

Characterized by: Profound sadness—crying and laughing at the same time—and the lack of yearning for anything else.

Characterized by: Making up a unique nickname for the (inanimate) object of your affection to commemorate it almost heavy-handedly. This outpouring of love is normally reserved for stuffed toys, but apparently, Jollibee and Chickenjoy now get the same treatment.

Characterized by: Turning to anyone, anything, just to be rescued from the endless ennui brought about by tragedy.

Characterized by: More than just acceptance, the last stage of grief, according to #Chickensad, is the ability to gain a new perspective for something we always just took for granted as a part of our life.
We must not forget: absence makes the heart grow fonder. The entire nation is eagerly awaiting the return of its favorites.
How did you react to #ChickenSad? Share in the Comments Section below.