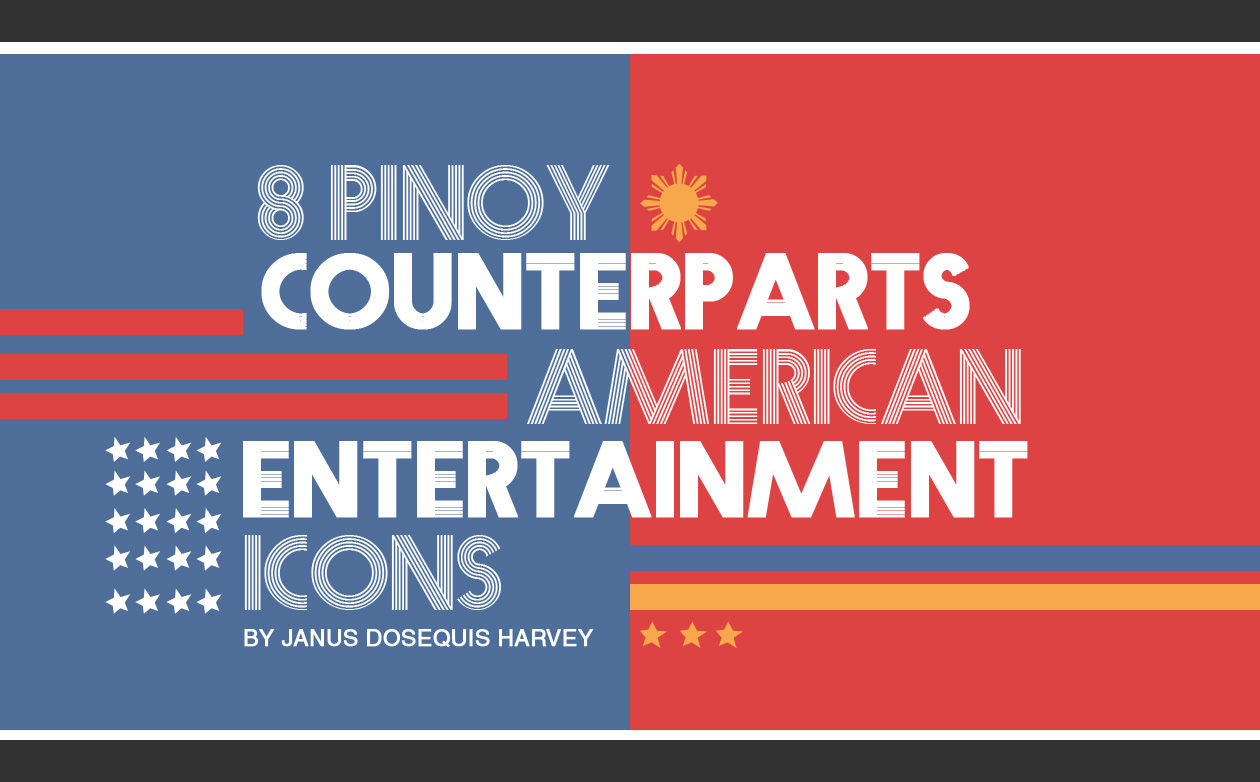 Until some time around the ‘80s, Philippine show business really hovered around finding Pinoy versions of American celebrities. Everyone had to be the “[insert icon here] of the Philippines” to be somehow recognized, with very few exceptions. At present, that overwhelming drive to compare Filipino celebrities to Hollywood may no longer be as strong, but we still see it from time to time. Here are 8 Pinoy celebrities who have drawn comparisons to international stars, to varying degrees of success. 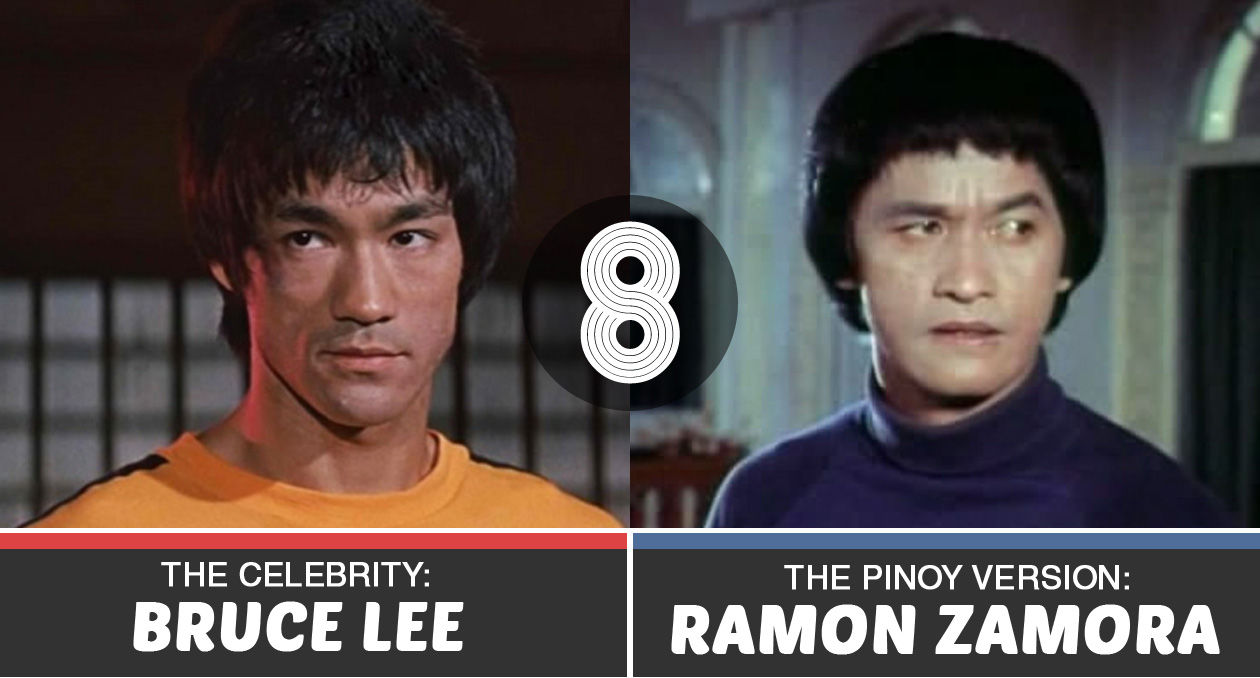 Via theshadowleague.com, ahashare.com
The Similarities: Ramon Zamora was known as an action star in his heyday, and is probably best known for his role in “Bruce Liit,” which drove home the point of his shtick in the ‘70s: a Bruce Lee ripoff with a comedic twist.
The Disparities: Ramon Zamora was never really just an action star. Not only was he a capable onscreen martial artist, but he also had excellent comedic timing, having been a regular character in Super Laff-In from 1969 to 1972. He regularly played a stereotypical German character during his stint, and popularized the catchphrase “Isprakenheit!” He was set to star in a show with Lucky Manzano and Anne Curtis when he passed away at 72 in 2007 —another thing he has over Bruce Lee, who died when he was 32. 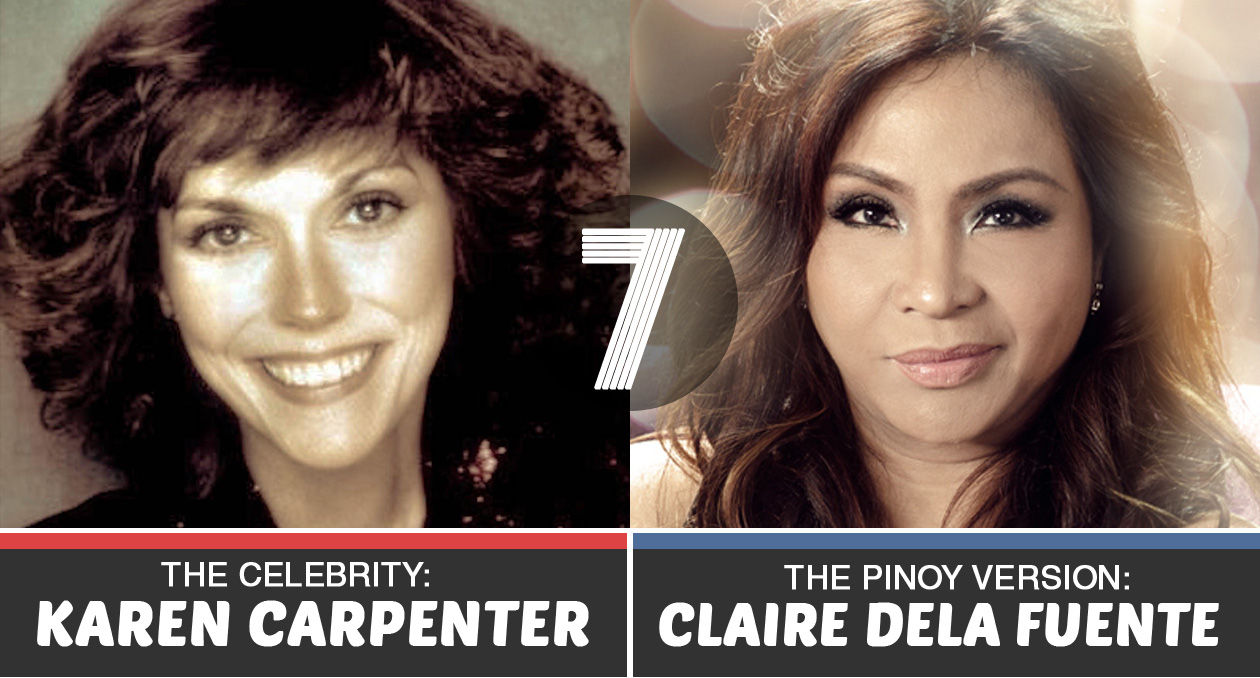 Via mans-womans.com, pinoyexchange.com
The Similarities: The comparisons don’t get any more direct when  Richard Carpenter himself commissions you to sing Karen’s songs. Claire dela Fuente is a jukebox queen with a very strong legacy that exists to this very day, even for people who are probably way too young to even know her. She’s like the prototype version of Arnel Pineda, who pretty much replaced Steve Perry in Journey almost seamlessly.
The Disparities: Karen Carpenter never had a bus line in her name. Neither did she have it canceled on her, nor did she become infamous for a lot of other things outside of singing the way Claire happens to be now.

6. The Celebrity: The Beatles 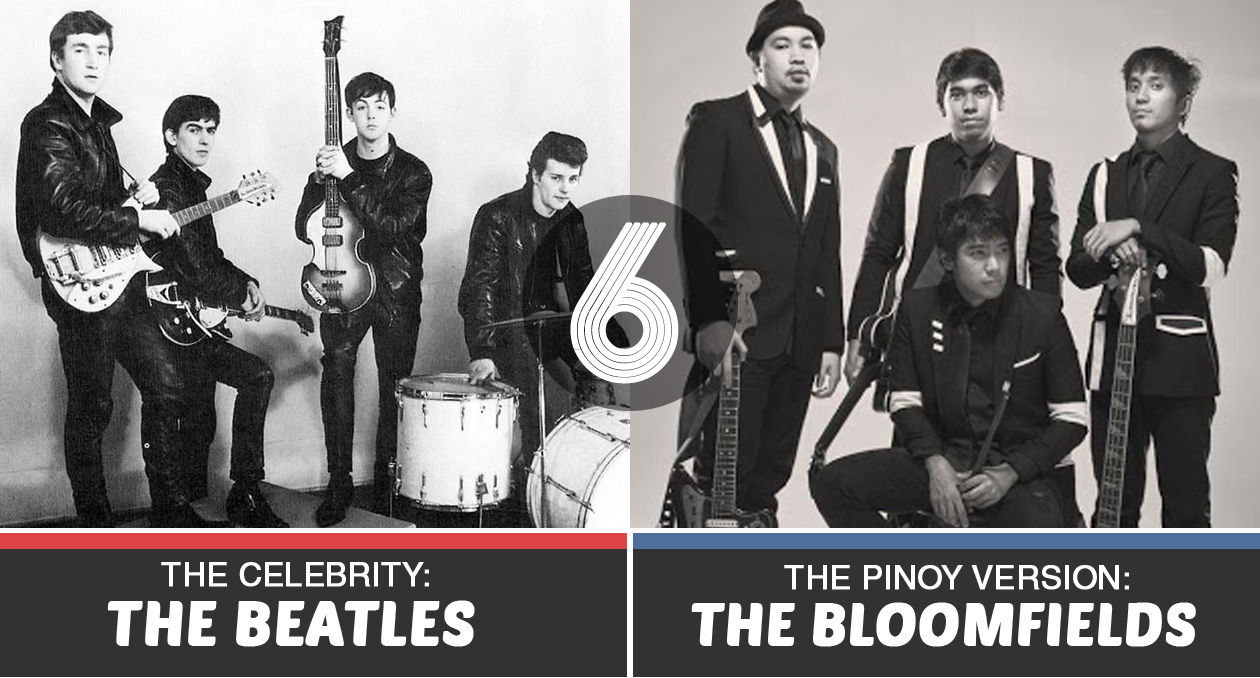 Via juliamarchese.wordpress.com, opm-musics.blogspot.com
The Similarities:  There were so many Pinoy bands who drew comparisons to the Beatles, from the Moonstrucks in terms of musicality to the Eraserheads in terms of legacy. In the present day, the Bloomfields, the Beatles and Beach Boys cover band with its own unique twist, holds that distinction.
The Disparities: Not very much, to be honest. It’s well-known that despite being a cover band, the members of the Bloomfields are musically.jpgted and capable of playing their own music. They also have a tendency to feud among themselves, if the changes in their lineup and issues over band names over the years are any indication. 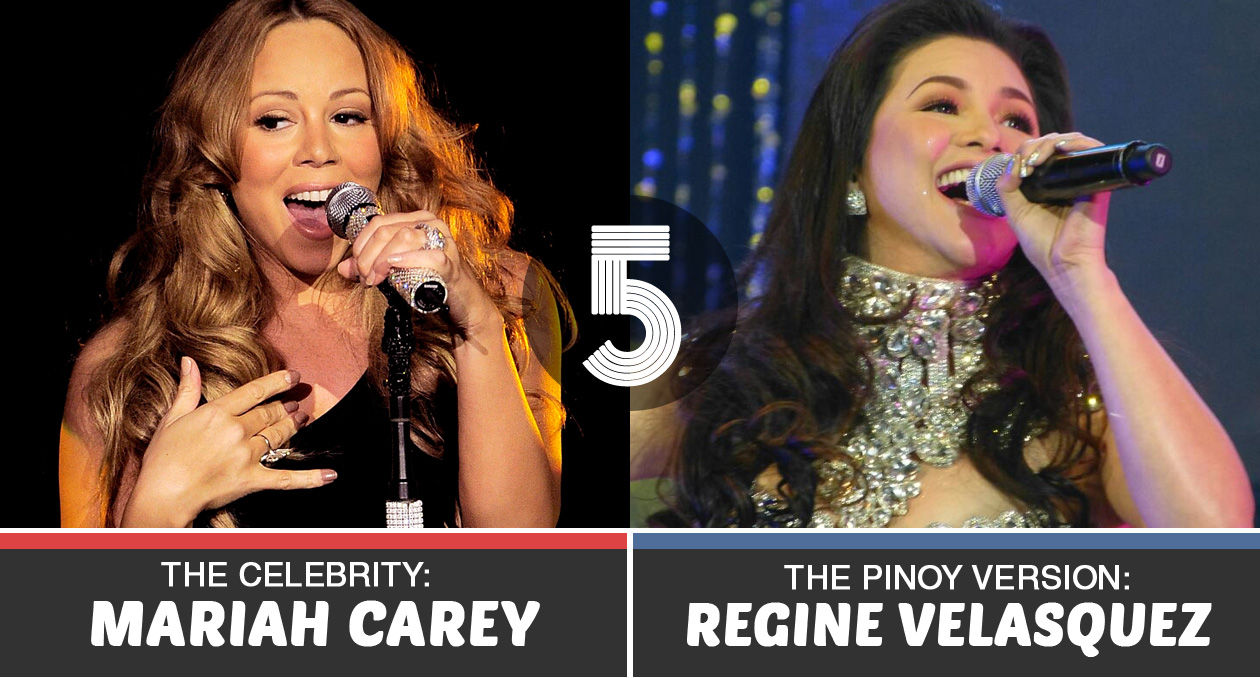 Via wrch.cbslocal.com, en.wikipedia.org
The Similarities: Well, it’s very easy to draw a parallel between these two belters, isn’t it? In fact, the comparisons were so strong before that people made up a rumor that in an interview, Mariah Carey called Regine Velasquez a “brown monkey” because the former was threatened by the latter. This was categorically denied by Donita Rose, who was supposedly the one who conducted the interview on MTV in the mid-'90s.
They also have the same incorrigible yet somehow endearing diva attitude that’s all part of their appeal. Also, they have the same figure. Especially lately.
The Disparities: In recent years, Mariah’s voice has been noticeably in decline. Regine seems to still have the same vocal quality she always had, but she shoehorned herself into belting her way through every song even when it’s completely unnecessary. Nonetheless, both divas have very similar careers, personalities, and only Mariah has exhibited a very questionable choice in her choice of men, if we look at how well Regine and Ogie have turned out after an initially rocky start thanks to Ogie being, well, married at the time. 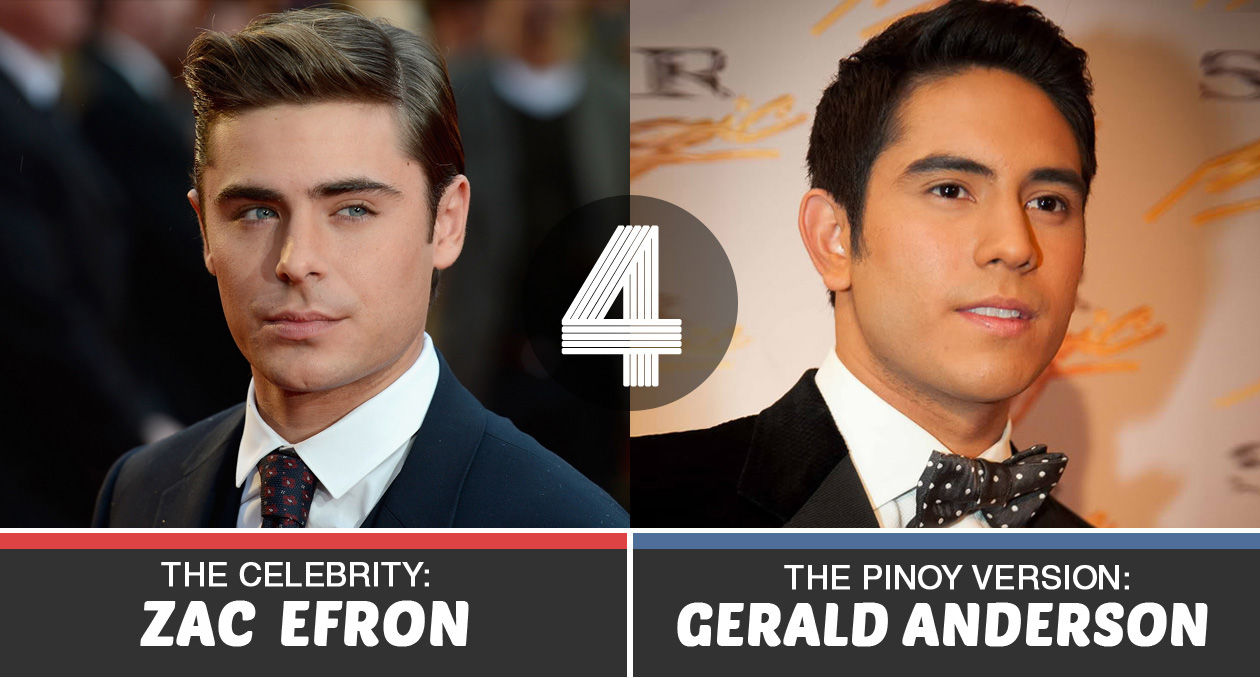 Via w3walls.com, pinoyexchange.com
The Similarities: This is a very interesting comparison, because it floats around from time to time, and a side-by-side photo of each could show you where it’s coming from. They’re both young matinee idols and heartthrobs linked to their first onscreen partner of note both in reel and real life. And yes, there was even a chance for Sarah Geronimo, another actress linked to Gerald in the past, to star in a movie with Zac. Gerald’s Facebook fanpage touts the comparison to the highest heavens, by the way.
The Disparities: Gerald can't really sing. 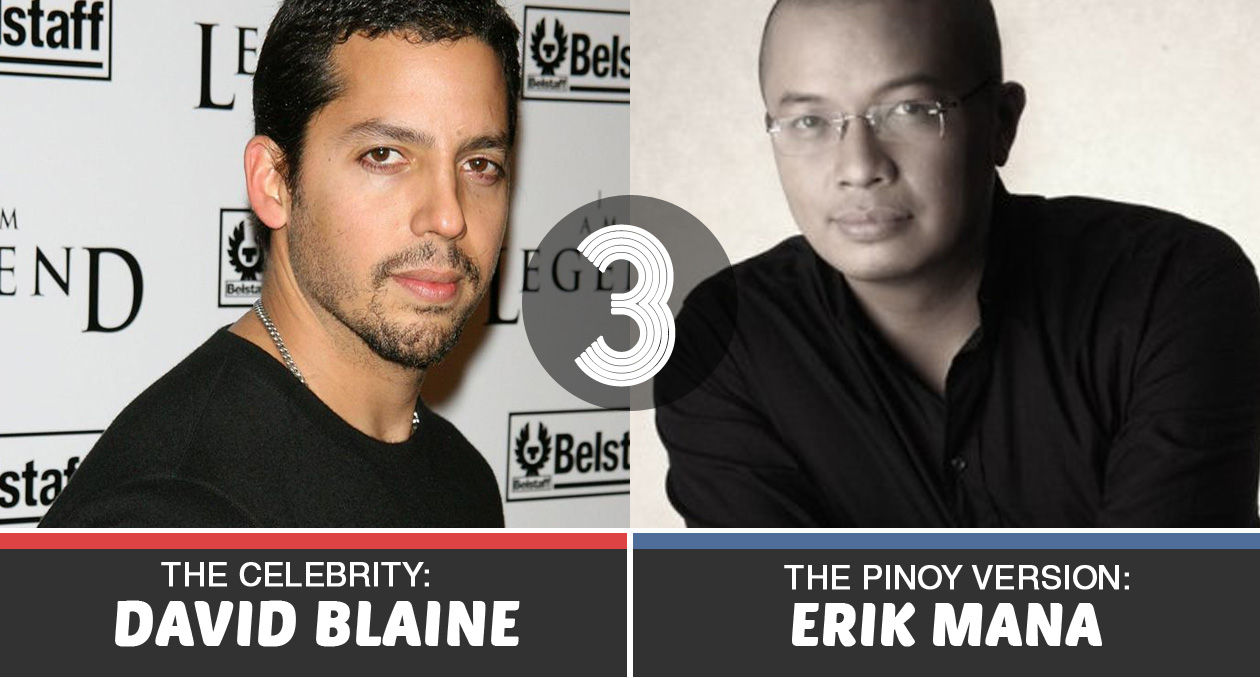 Via buddytv.com, orangemagazinetv.com
The Similarities: Both came to the fore of public consciousness via street magic TV specials. Erik Mana has built a name for himself over the years and drawn ridiculous amounts of comparison to the guy who made street magic cool in America. Of course, practically every magician in the Philippines who becomes remotely famous nowadays will inevitably draw comparisons to David Blaine or Criss Angel, but Erik Mana was the first at it.
The Disparities: When asked about the comparison, Erik Mana expressed mixed feelings over it. As flattering as being compared to David Blaine is, Erik also doesn’t want to limit his legacy to merely being in the shadow of another performer. The fact that Erik also does stage magic now also furthers the divide between the two, since Blaine never really outgrew street magic.
(And then there's this guy.)
[buffer by="10px 35px 10px 35px"] 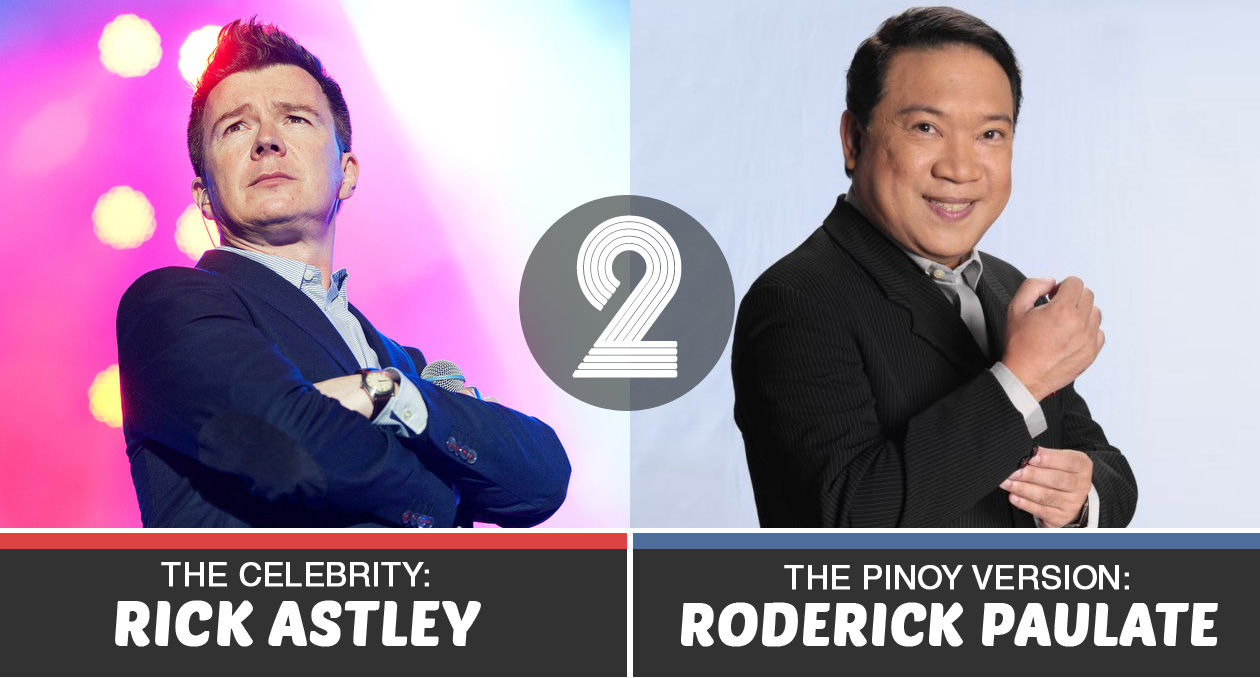 Via puttyfoot.com, thewebmagazine.net
The Similarities: Well, both were assumed to be gay, even if we know that Rick Astley is married to Lene Bausager, and has a daughter with her, who's probably awed and embarrassed by her dad at the same time. Roderick, on the other hand, would sometimes talk about his ex-girlfriend, Jackie Aquino, in interviews. In the ‘80s, Kuya Dick built his career on singing Rick Astley’s hits, and singing it so well you can’t tell who’s doing singing if you only heard it on radio.
If you don’t believe me, here, have a Rickroll on the house, and let's party like it's 2007 again : [buffer by="10px 35px 10px 35px"]
The Disparities: Roderick Paulate is an accomplished actor. His singing is just a small facet of his career at this point. Rick Astley, on the other hand, simply does what he does best: entertain Kel Fabie, his number one fan. 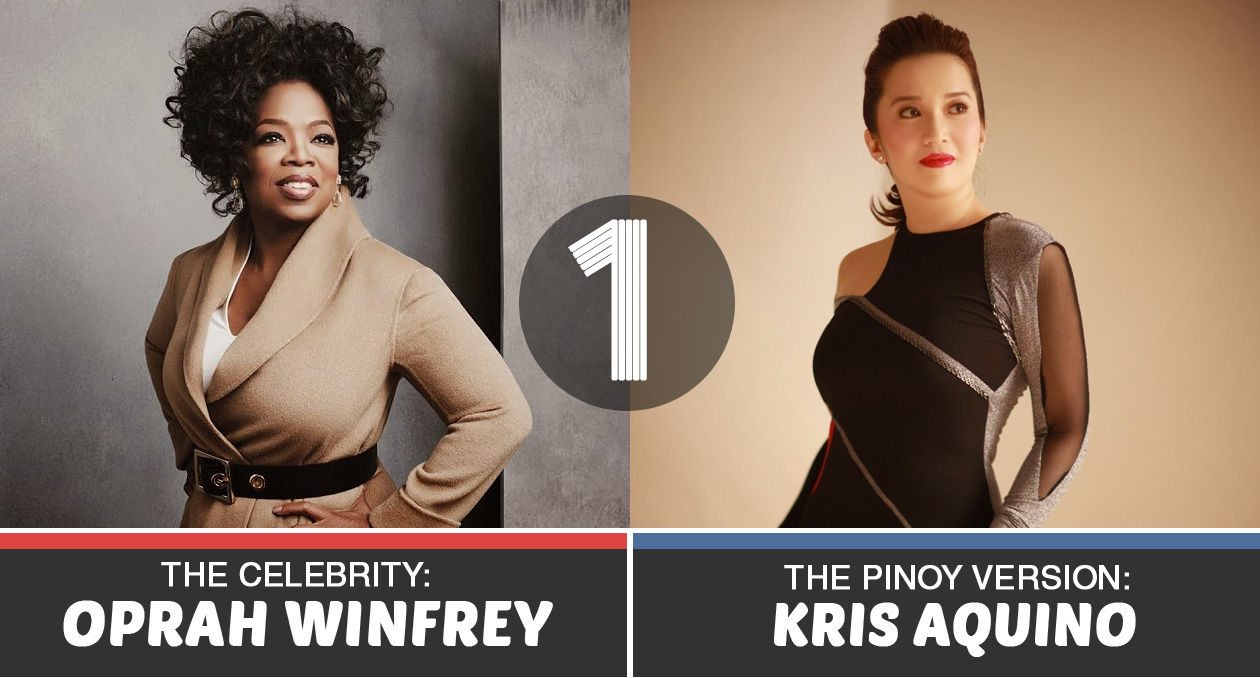 Via dressup-down.blogspot.com
The Similarities: They both have talk shows. They both have magazines named after themselves. They both have people who hold on to every word they have to say. Maybe Kris Aquino was onto something when she called herself the Oprah Winfrey of the Philippines?
The Disparities: Except the part where Kris Aquino makes all her interviews about herself, obviously. Can you imagine if it was Kris Aquino who conducted the tell-all interview with Lance Armstrong instead of Oprah? Would Kris have told Lance that Bimby could beat him in a bicycle race if the disgraced biker stopped using performance enhancing drugs? Or that Josh has one more testicle than Lance does?
Let’s face it: The best comparison you can draw between Kris and Oprah is that Kris Aquino is every bit as good a host and interviewer as Oprah Winfrey is white.
So do you think Kris Aquino is our Oprah? Post your violent reactions in the Comments Section.