8 Gigs to Kick Off March Madness 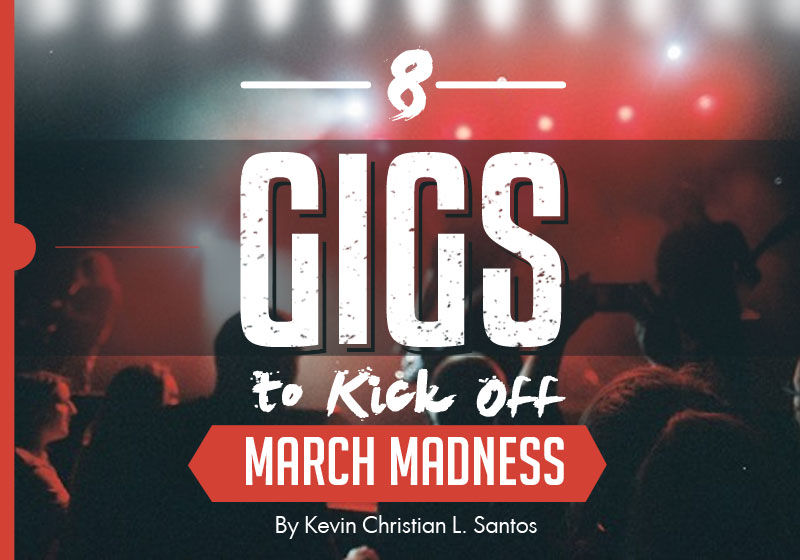 Summer is officially here, the cold spell has passed and milk is now a bad choice. What better way to kick off the month by enjoying great music around the city?
Here’s our roundup of gigs for the first week of March:

8. Red Ninja Goes to the North

After a short hiatus, the music production outfit Red Ninja comes back to the north, and by north we mean Quezon City. Catch local acts Autotelic, Ephesus, Jejaview, Lions and Acrobats, and more on March 4, Tuesday at Route 196 in Katipunan.
150 pesos gets you in with a free drink, click here for the deets.

Hard rock band Diachroma releases their second EP entitled “Change of Perspective” on Saturday, March 8 at Black Kings Bar in West Avenue, Quezon City. Get ready for a night of heavy riffs as Faintlight, Curbside, heavy metal act Divine Sacred Order, and more share the stage.
Entrance is at 180 pesos while Diachroma’s “Change of Perspective” EPs are at 80 pesos a pop. Check out the details here.

Indie alternative rock heavies Peryodiko (fronted by former Twisted Halo frontman Vin Dancel) releases their emotionally-charged EP “Balik Sa Simula!” on Saturday, March 8 at Route 196 in Katipunan.
Their EP features collaborations with Diego Castillo (of Sandwich and The Diegos) Jazz Nicholas (Itchyworms), and more. The event will also feature performances from The Diegos, post-rock act Earthmover, Hidden Nikki, and Cheats.
150 pesos gets you in with a free drink, with the EPs going for 150. But wait! The first 50 buyers of the EP get free DIG Radio pins and Twisted Halo CDs while the first 20 get free Gibson shirts! Click here for details.

Bakunawa is a monthly production that showcases some of the country’s top producers, DJs and beatmakers, with genres ranging from hiphop, dub, RnB, chillwave, tunes-to-twerk-to, you name it.
This month’s edition of Bakunawa looks to be an interesting one, deviating from the normal single DJ setup and employing a “Tekken Tag-Team” style of dual DJ-ing; because what’s better than one DJ spinning? Two DJs spinning.
Expect killer sets when all-around killer Nix Damn P collabs with SuperMikki, the combined trippy, hypnotic dub stylings of Red-I and Soulflower, the LibraBoyz and Bin5 tagging in with IzE! Double the fun, double the action!
And it’s free! Click here for details.

Fancy a psychedelic trip to the dark and undiscovered recesses deep in your being?
Head on over to heavy dub act Goodleaf’s second full-length album Mutations & Natural Versions launch on March 8 at B-Side.
If you’re not familiar with Goodleaf, you’re in for a treat. The band’s sound is influenced by reggae and dub characterized by sonic, extra-terrestrial distortions and grooves guaranteed to give you a heady high.
Also performing are alternative garage-punk act The Butchercons, the psychedelic groove explosion of Wilderness, ska band The Dandimites, artisans of disco psychedelica The Discoball, Radioactive Sago Project (‘nuff said) and more.
The gig is free, and Goodleaf’s Mutations & Natural Versions album is 300 pesos a pop, with a free DVD. What a bargain! Interested? Of course you are. Check out the details here.

Thrash metal legends Megadeth returns to the Philippines on March 7 at the World Trade Center in Pasay City.
Their Manila concert in 2012 got rave reviews from metalheads. Expect Dave Mustaine and crew to kick an even ungodlier amount of ass as they blast their heaviest of hits.
Execute the Countdown to Extinction with VIP tickets at Php 5,690 and general admission tickets at 3,620 so you can sway to the symphony of destruction (see what we did there?). More info here.

2. Caspian + And So I Watch You From Afar live in Manila

Craving for interstellar, heavy melodies that paint surreal, ethereal landscapes?
You’re in luck. Post-rock wunderkinds Caspian, is set to play Manila alongside Irish experimental math-rock act And So I Watch You From Afar with local post-rock trio Earthmover on March 7 at the Alphaland Alpha Tents in Makati.
Brace yourself for a night filled with energetic, explosive, sonic disruptions that will leave your ears and your entire being craving for more.
Advance tickets are priced at  2,000 while Regular Tickets are at 2,500 pesos. Tickets are available in Team Manila outlets. Find out more here.

1. Washed Out  and Baths live in Manila

Chillwave fans rejoice!
Washed Out and electronic beatmaker Baths will perform in Manila on March 6 at the Alphaland Alpha Tents in Makati.
This night will promise a groovy, out-of-body experience courtesy of Washed Out’s drowsy, distorted yet dancy stylings and Baths’ mysteriously unorthodox dreamy, fragile, layered tunes.
Still not convinced? Washed Out’s debut album “Within and Without” was named Best New Music by Pitchfork while Baths’ sophomore album “Obsidian” also received the honor while his debut album “Cerulean” was named an Honorable Mention in Pitchfork’s Best Albums of 2010 list.
Regular tickets are priced at 2,500 pesos. More details here. It will all feel right underneath the Miasma Sky (again, see what we did there).


What are you guys looking forward to this week? Post them in the Comments Section.