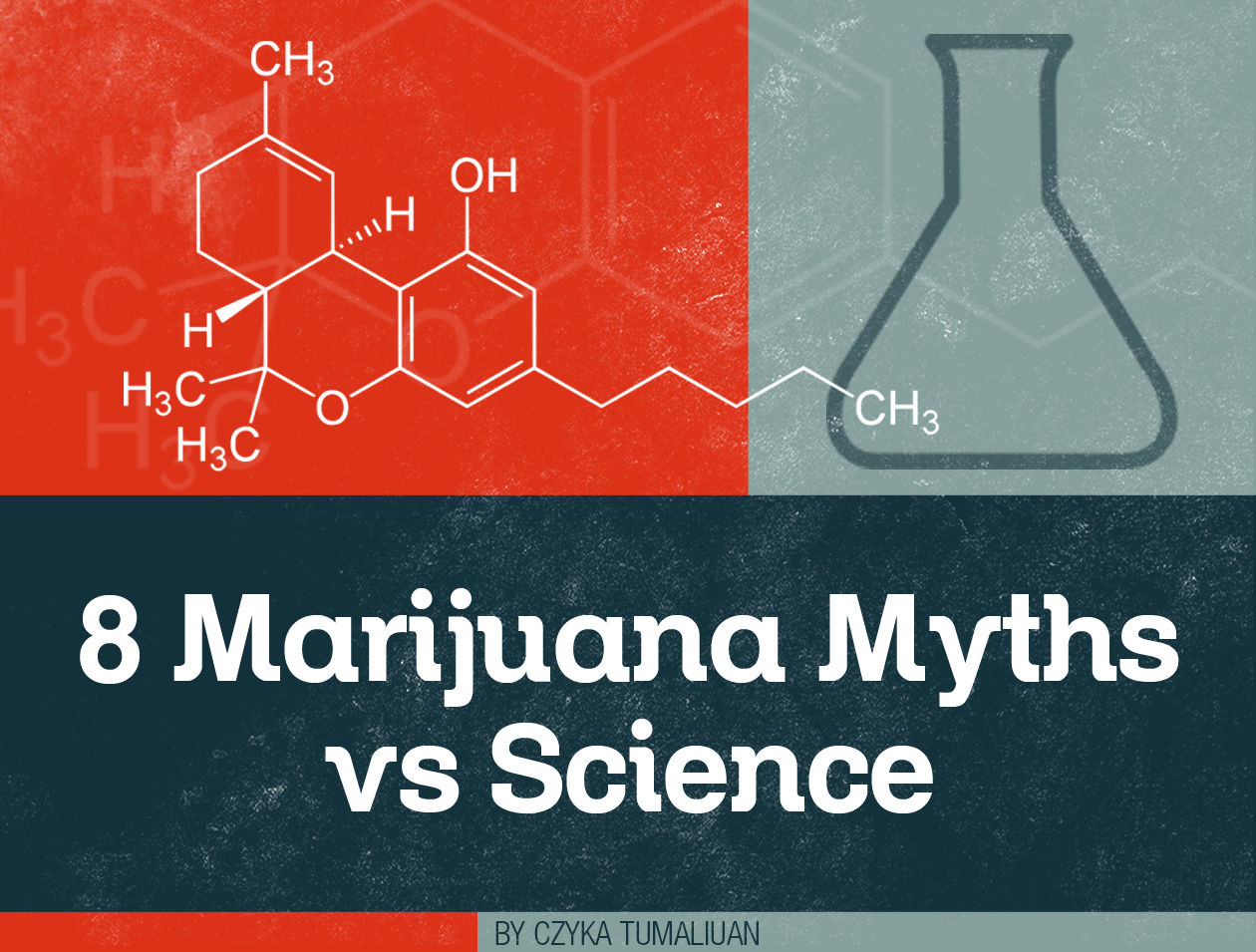 [dropcap letter="O"]ur elders have always warned us about the “evils” of marijuana—or pot, ganja, chongki, doobie, bakes, grass, damo, weeds, dope, whatever generation introduced it to you. They constantly prod us to stay away from pot circles because we might be influenced to try the illicit herb, and might get hooked to it after. Aside from addiction, they don’t want us to get caught using and serve jail time as a consequence.
Clearly, they mean well and only wish the best for us. But, have you ever wondered whether these claims are based on facts, or just sheer superstition? Have you ever tried searching for proof that supports the negative views on weed? Have you ever wondered what marijuana actually does to the body? Is it really a health hazard? What does science say about ganja?
To shed light on the issue, here are 8 infamous notions about pot under the scrutiny of science:

The National Institute on Drug Abuse (NIH) reports that only 9% of marijuana users will get hooked to it. But, unlike the highly possessive compounds found in cigarettes, crack and alcohol, the active chemical in marijuana—tetrahydrocannabinol (THC)—has mild addictive qualities.
An American experiment exposed a bunch of people to daily hits of cannabis, giving 180-210 mg of THC (or 15-20 joints) to each subject. The study revealed minor dependence symptoms during withdrawal, and noted that it’s unlikely to exist when THC is taken in normal doses. Who would smoke more than 5 joints a day ALL BY HIMSELF anyway?

On a physiological level, cannabis isn’t composed of chemicals that can cause the body to involuntarily lust for other prohibited drugs. But, pleasure and preference may drive pot users to try other underground substances.
People who like how weed alters their consciousness could possibly try other drugs that promise similar effects. However, if these other illicit substances are as accessible as weed, we can’t tell if people would try pot first or just proceed to trying the others.
In a Substance Abuse and Mental Health Services Association (SAMHSA) report, the figures relating weed use to cocaine and heroin abuse remain inconclusive with 2.3 million people saying that they’ve tried pot, 617,000 for cocaine and 180,000 for heroin.
You may check Is Marijuana a “Gateway Drug”? for more studies exploring the gateway theory.

Existing clinical research studies on cannabis still fall short in fully ascertaining the medicinal value of weed. However, various real life cases show that it can help treat pain, nausea and lethal seizures. Charlotte Figi’s story is a case in point. Before cannabis medication, the toddler suffered from 300 seizures a week that lasts for 3-4 hours. After mixing cannabis oil to her food twice a day, the number of attacks went down to 2-3 a month.
Unfortunately, for our very own Moon Jaden Lugtu-Yutuc, the medication came too late. Realizing that alternative medicine is the only way to free Yutuc from the pangs of epilepsy, her doctor advised her parents to administer marijuana to the little girl. However, Yutuc passed away three months before the herb was made available.
Philippines Moms for Marijuana and Dangerous Drugs Board (DDB) passionately push for the legalization of medical cannabis in the Philippines to make the cure accessible to afflicted Filipinos who genuinely need weed to get better.

Weed’s organic composition isn’t a bane on the lungs per se; the smoke is. NIH maintains that marijuana smoke irritates the lungs the way tobacco smoke does, but there’s still no evidence that links pot usage to lung cancer. The thing is, there are a lot of ways cannabis can be taken, and people are free to choose these alternatives to save their lungs from potential ruin. This is why there are THC-based treatments approved by DDB for special situations.

Unlike alcohol which doesn’t have any chemicals similar to those present in the body, marijuana releases the chemical THC that mirrors the natural neurotransmitters found in the brain. Once consumed, THC activates a specific cluster of brain cells called cannabinoid receptors that causes the mind to be collected and calm. Moreover, THC interrupts some of the natural operations in the brain, altering imagination, perception and memory. It also affects the dopamine levels in the brain, allowing feelings of euphoria, relaxation and anxiety to seep in the user’s body.
Clearly, neuroscience shows that cannabis modifies the brain, but deeper studies have mixed analyses about its damaging potential. On the one hand, there are studies that show how long-term use may scar the brain, causing hallucinations and paranoia in some cases. On the other hand, there are those who posit that it can actually help heal brain problems.

The effects of weed on memory may vary from one person to another. It can weaken memory and learning for a brief period of time after consumption, depending on the strength of the strain, method of consumption and the user’s tolerance. A study revealed that pot cripples one’s capacity to recall past experiences for short periods of time, but an airtight neurobiological explanation for this syndrome is still unknown.

Tons of cannabis literature point out that pot use causes the so- called “amotivational syndrome”—it encourages apathy, weakens drive, and generally cuts down a person’s productivity. While traits linked to these symptoms can be seen in weed users, present clinical research about this negative setback is still insufficient to prove the disorder. Moreover, a study actually suggests that weed absorbs and augments a person’s preexisting traits. In other words, weed is just a background drug. Smoking pot just makes it more obvious that a person is lazy—it doesn't cause sloth.
In truth, a lot of people who've tried marijuana say that it makes them more focused and artistic. Marijuana advocate Stephen King commented that weed makes him calm and that he only smokes before going to the cinemas, while Steve Jobs said that dope makes him relaxed and creative. A 2010 study shows that the chemical properties of cannabis magnify the brain’s ability to build connections between unrelated objects and ideas, making the mind more imaginative. It also illustrates that marijuana frees people from their fears and limitations, allowing them to think out of the box, and get out of their comfort zones.

There is no record of death from cannabis, and an overdose is highly improbable. World Health Organization (WHO) notes that the adverse effects of pot use pales from those of tobacco and alcohol abuse with approximately 6 million reported deaths from tobacco addiction each year, and 2.5 million from alcohol worldwide.
The Comments Section is waiting for your thoughts.