8. Fighters to Watch at ONE FC: Warrior’s Way 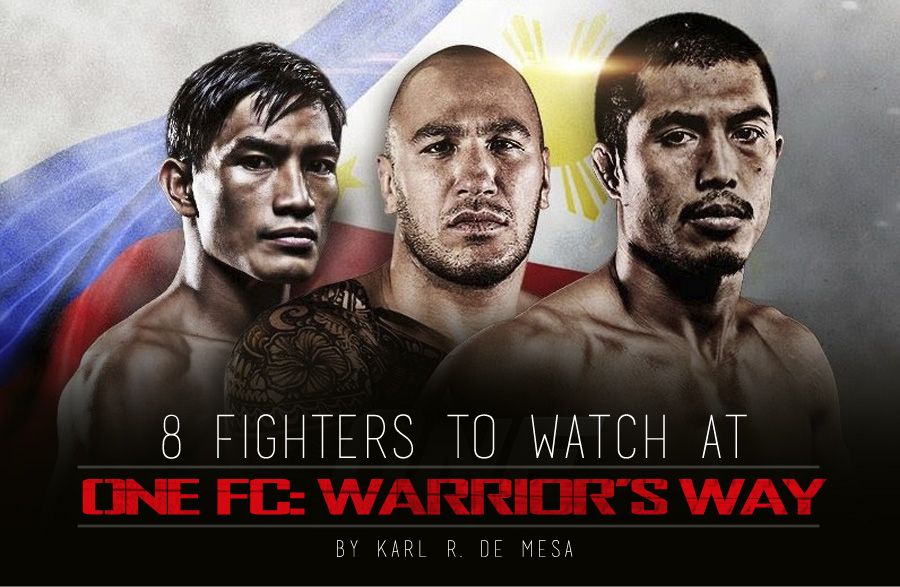 [dropcap letter="W"]arrior’s Way on December 5, at the SM MOA Arena will be ONE Fighting Championship’s bigger cards in Manila, led by MMA superstar Brandon Vera, who happens to be proudly FIl-Am, claims roots in Quezon, and can speak near flawless Tagalog along with being pretty adept with his chicken adobo-cooking skills.
Here’s a quick briefer on the interesting fighters and their match-ups on the stacked card. 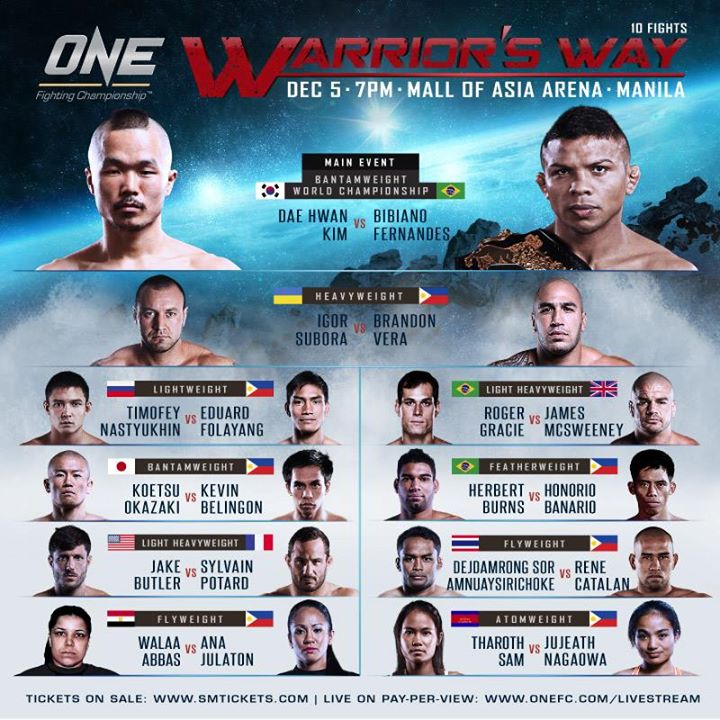 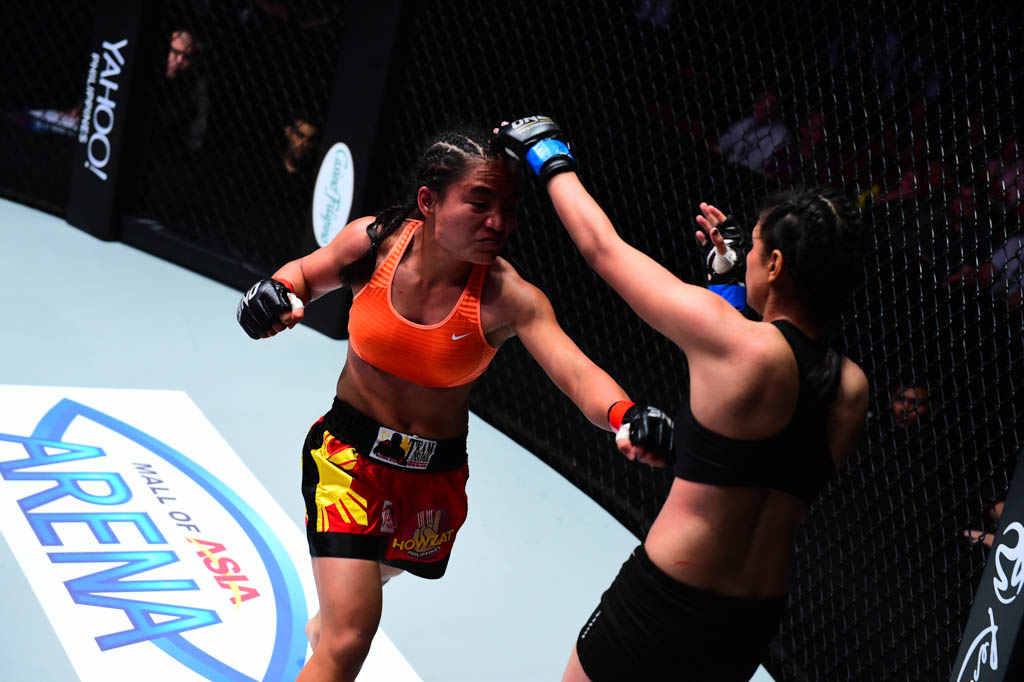 [buffer="10px 15px 10px 15px" id="bar2"]photo courtesy of ONE FC[/buffer]
Versus Tharoth Sam
Atomweight
The Igorota fighter looked superb last time she was in the One FC cage when she turtled up India's Jeet Toshi with her furious boxing skills. What makes her upcoming fight against Cambodia’s Tharoth Sam of particular interest are her improved grappling skills courtesy of the Goat Locker gym.
There’s also icing with the “Bad Girl’s“ true rags-to-riches story, one that saw her overcoming poverty and coming up through the ranks of the Philippine boxing scene before winning the WBO Asia title, competing in several bouts in Korea and Japan. This native of Baguio City (one of the few pro MMA fighters NOT trained under the Team Lakay banner) has ferocious punching power and is rounding out her game, training with some of the top gyms in the country.

What impressed me the most with Cordillera native The Landslide’s last few outings in the cage was his much improved wrestling skills, using it to good effect for a UD win against Vincent Latoel but especially against former ONE FC Lightweight World Champion Kotetsu Boku. A big leap from being dominated on the ground by UFC vet Kamal Shalorus.
Folayang is one of the most popular sports figures in the Philippines. A wushu practitioner, the former schoolteacher transitioned to mixed martial arts and has an impressive record of 14 wins and four losses so far in his career.
“This is an exciting time to be a fan of mixed martial arts in the Philippines,” Folayang has stated, ONE FC has brought the best international stars to Manila to test the top Filipino stars. Friday will be a hallmark day for the country as we prove we have some of the best mixed martial artists in the world.”
Don’t take our word for it, see The Landslide’s takedowns against Boku in the vid. 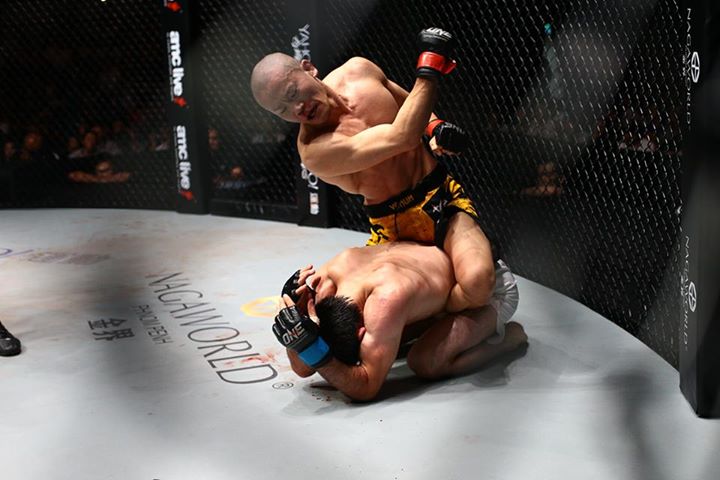 [buffer="10px 15px 10px 15px" id="bar2"]photo courtesy of ONE FC[/buffer]
Versus Kevin Belingon
Bantamweight
While we’ve all seen how Kevin Belingon, Okazaki’s opponent come Dec5, gets all fuelled up and aggressive with his leg kicks, it’s the Japanese fighter who turns up more interest in this match up by having put on the performance of his career in stopping Russia’s Yusup Saadulaev in Taiwan, earlier this year.

Versus Dejdamrong Sor Amnuaysirichoke
Flyweight
Rene Sornito Catalan trains with Full Contact International and has arguably one of the most impressive track records among all Filipino mixed martial artists, but just with Wushu. He was a Wushu world champion who also won gold at the Asian Games. However, he put up a spirited performance at his debut in One FC: King’s and Champions but ultimately fell to Brazilian Jiu-Jitsu black belt Alex Silva via armbar, proving that the ground game is still one of the perennial holes in the Pinoy MMA game – boy, not having an amateur wrestling and grappling course available on the collegiate level really shows.
He now gets a chance to right the ship in Manila by taking on Dejdamrong Sor Amnuaysirichoke. It’s going to be a tough night what with Sor Amnuaysirichoke using his Muay Thai World Champion skills in his last fights to dispatch guys with relative ease, but a match up against Catalan should give us some nice striking fireworks if the two come to bang.
If he’s done the work, here’s a position Catalan should never find himself in again. Ever. 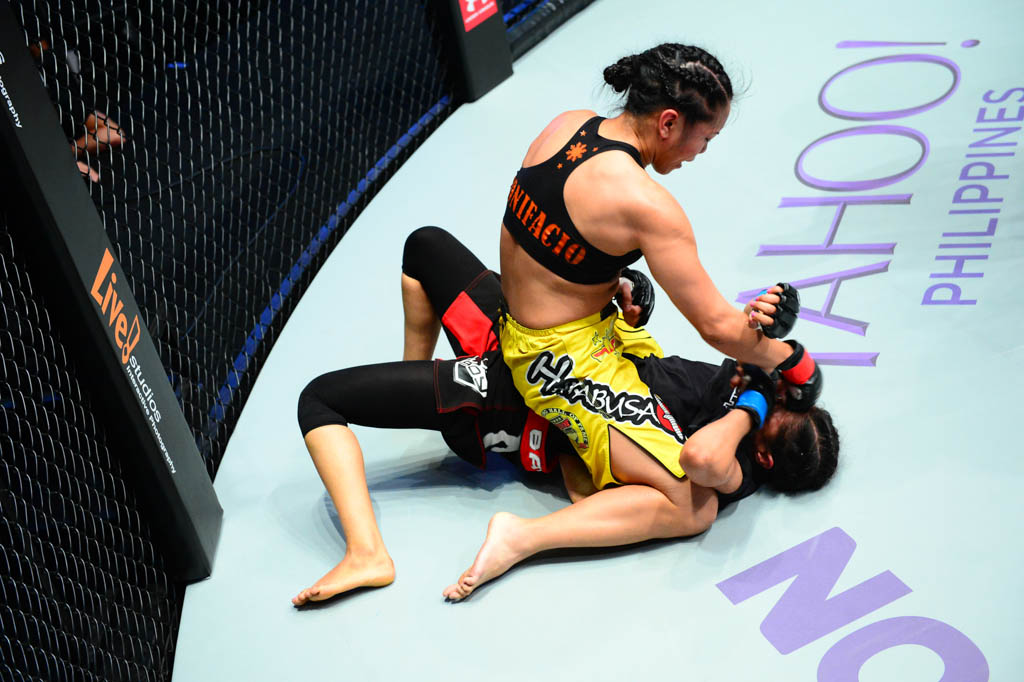 [buffer="10px 15px 10px 15px" id="bar2"]photo courtesy of ONE FC[/buffer]
Versus Walaa Abbas
Flyweight
I was there when “The Hurricane” overcame a tight guillotine to finish Egyptian Top Team’ss Sayed Saber to achieve a standing ovation from the crowd in her MMA debut. It was an uplifting moment. Then she went and lost her momentum against the arguably better-trained and better-rounded Ann Osman.
Julaton now has another Egyptian set against her in Walaa Abbas. Julaton’s go-to attacks is with her fists, being both the WBO and IBA Super Bantamweight champ. What should prove a game-changer is Julaton enlisting the help of prominent wrestling coach Ricky Lundell to improve her grappling. I mean, this is the guy who crafted the ground skills of UFC vets Frank Mir and Joe Lauzon.
“Ana is so proud to be Filipina and has been working so hard to make all her supporters and Kababayans proud of her. With Coach Ricky Lundell teaching her ground game you can expect a new and improved Ana Julaton,” her boxing coach, Angelo Reyes, said.

Post by ONE Fighting Championship.
Versus Bibiano Fernandes
Bantamweight Championship
Bibiano Fernandes, the Bantamweight Champ, has got to be one of the most unspectacular fighters on the ONE FC pound-for-pound roster. Sure he’s quick as a mongoose and has jiu-jitsu up the wazoo but nearly all of his fights I’ve seen thus far have gone the distance without a definitive submission.
Which should make a hungry guy like Dae Hwan Kim take his undefeated record to the next level and dethrone the dexterous, boring Brazilian. Dae Hwan Kim. I mean the crafty Kim did defeat our highly-touted Filipino contender Kevin Belingon in his last appearance, earning top contender status.
I’ve seen Fernandes get strong armed and out-agressioned by Urijah Faber, so hope an early blitzkrieg should work against the champ. 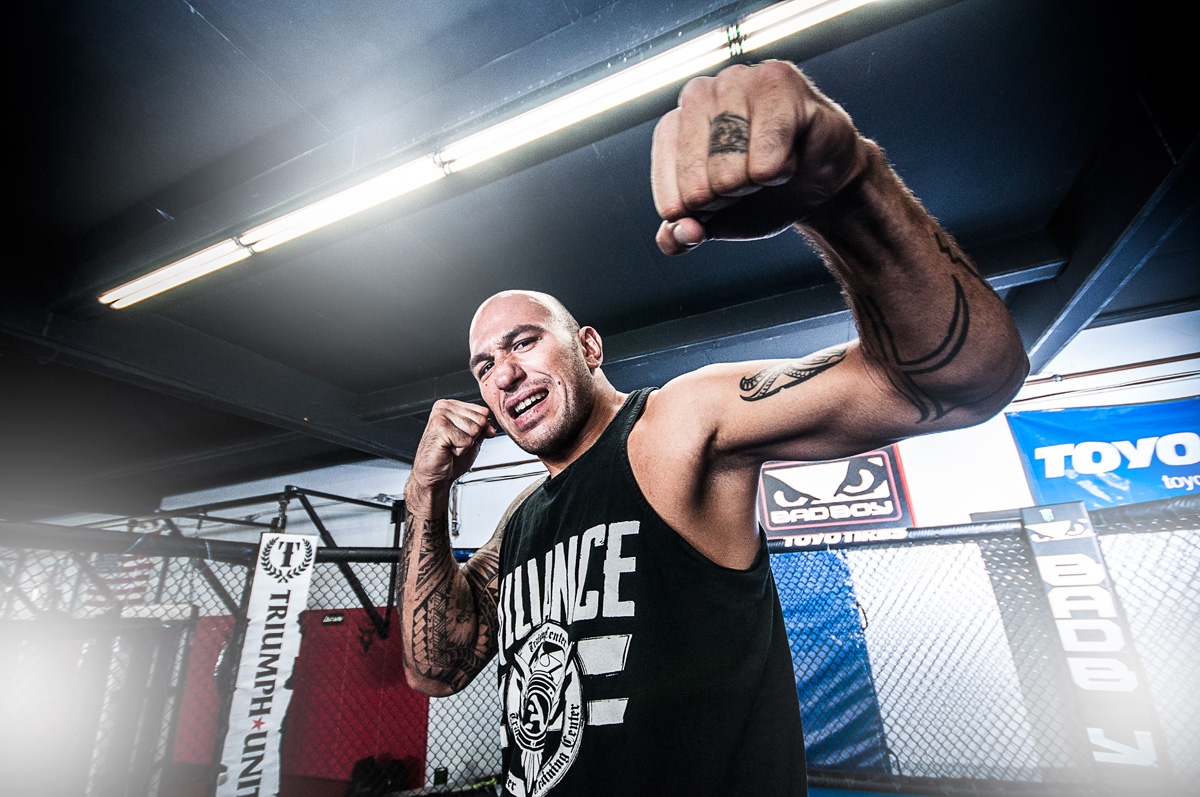 What can we say about “The Truth”? He’s already a Fil-Am MMA legend, lean and mean adobo cook, and savvy speaker of Tagalog puns. He’s also considered to be one of the best fighters at light heavyweight and heavyweight on an international level. In analyst terms, the opportunity to rain soccer kicks and stomps on a grounded opponent should present The Truth with a great chance to quickly end the bout.
Brandon Vera stated, “I’m doing it for my family. For the first time, my family in the Philippines will be able to witness me live in action! This is a huge fight for me and I want to win for them.”
Well, he should, since this IS the time for a career resurrection, and it’s not like Ukranian destroyer Igor Subora, who’s been living in Manila and training at FIST Gym, will just stand in front of him like a punching bag.

Post by ONE Fighting Championship.
For more about The Truth, you can peruse our extensive itemization of his UFC peaks and valleys record on another 8list. 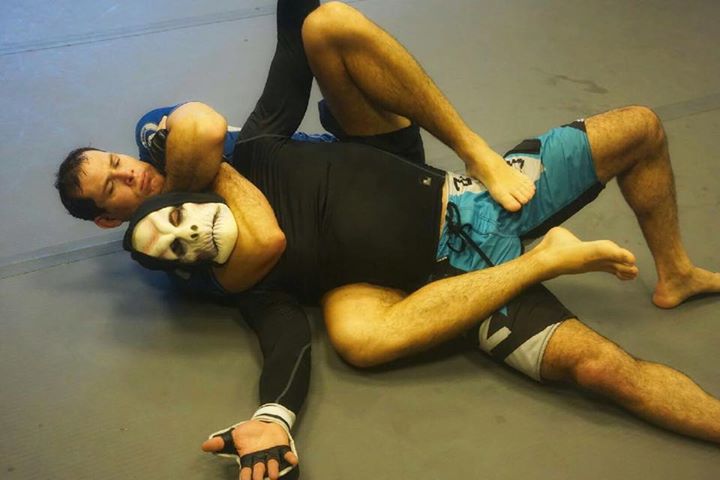 Roger Gracie is a true strangler and he’s got the jiu-jitsu royalty name to go with it.
An icon of the grappling world, he is also the grandson of Carlos Gracie, the creator of Brazilian Jiu-Jitsu. In 2005, he won both the heavyweight and absolute division tournaments at the prestigious ADCC Submission Wrestling World Championship. He also won all of his bouts at the 2009 Mundials and have never been submitted in competition in more than ten years. He also has an impressive mixed martial arts record, notching up six victories thus far.
What makes this, in my opinion, the most interesting fight on the card is Gracie’s opponent: knockout artist, Ultimate Fighter vet, and true grit striker James McSweeney. The fastest way to throw jiu-jitsu out the window is to punch a guy in the face hard. McSweeney’s got that. He has destroyed both light heavyweight and heavyweight opponents via knockout, like his perfect two-step flying knee against Chris Lokteff's chin.
After his last bout a year ago, Gracie was prepared to walk away from mixed martial arts. However, after speaking with a few close friends and ONE FC executives, he decided the itch for competition remains and decided that now was the time to come out to Asia to create a legacy.
"I am happy to sign with ONE FC. I had given up in fighting MMA, decided to go back to jiu-jitsu, but I got this offer and it changed my mind," Gracie said.
This is, truly, a clash of two high profile athletes in the sport today, and it has big big potential to become a classic striker versus grappler bout.

All photos courtesy of ONE FC, except where indicated.