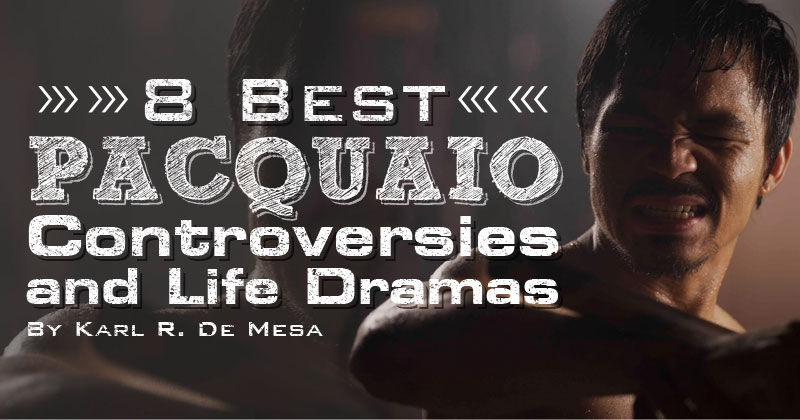 Thanks to virality and no small amount of his celebrity and political post swallowing up the accomplishments of his boxing career (which still remain awesome, by the by) it’s hard for pugilist and politician Emmanuel "Manny" Dapidran Pacquiao, better known as Pacman, to escape controversy.
There have been quite a few over the years which were sometimes embarrassing, sometimes cringe-worthy, but always entertaining; almost like they come in cycles, too. Like an aperitif before the spilling of blood, we’ve compiled some of the best of them from both in and out of the ring for your perusal.

After bagging his second term as Saranggani’s representative to the Lower House (unopposed, at that) San Jose barangay chairman Alfredo Belgica accused Pacman and his bodyguards of mauling and attacking him during a house-to-house campaigning two days before the May 13 midterm elections this year. The altercation happened when Belgica confronted the Saranggani congressman while he was distributing cash and goods to families, effectively “buying” votes in his favor.
Pacman himself denied the mauling incident, but reports also said that the “Boxer of the Decade for the 2000s” was detained inside the barangay Hall as a result of this. In his defense, Pacman filed a complaint at the Fatima police station, claiming that Begica fired a gun at his supporters. Violence in the ring is one thing, but when it spills outside it (and in an election-related incident to boot), there’s signs of being unable to curb your fists and a propensity to beat up non-fighters.

Manny and God have always had a good enough relationship. The Man Upstairs gives Manny fists of steel and speed that kills, while Pacman thanks him after a victory and even goes directly to the Black Nazarene Basilica in Quiapo to hear Mass when he comes home.
Wearing his Catholic faith so much in his sleeve has made him loved not only by boxing Pinoy fans, but the Church leaders, too. They’d already previously asked him to become a "Bible ambassador" to help promote reading of the Bible of among Catholics, and in mid-January of 2012 during a media interview he said that he had decided to “renew” his faith and had given up vices such as gambling and womanizing following an "encounter with God" during a dream.
An AFP report quotes him as saying that, in this dream, Pacquiao found himself deep inside a forest, where a voice from a shining bright light asked him why he was going away from Him: "I woke up crying. I remember I was crying in my dream and when I touched my pillow, it was wet. If I had died last year or in the last two years, I'm sure I would have gone straight to hell. My faith in Him was there, 100 per cent, but behind it, after prayers, I would still do evil things."
And so, arise, Brother Manny. Born again, but still Catholic, he claims. Wait...what?

While eventually revealed as a misquote, the controversy and furor that arose from it fueled the claim that Manny was an intolerant and hateful man to homosexuals. It all came from an interview that Pacquiao gave to the “National Conservative Examiner” where he expressed his disagreement with President Obama's recent endorsement of gay marriage. To further fan the flames, the story quoted the Old Testament book of Leviticus 20:13, which says : "If a man lies with a man as one lies with a woman, both of them have done what is detestable. They must be put to death; their blood will be on their own heads." Some media outlets even reported that Pacquiao said that gay people should be "put to death."
Backlash was swift and harsh. A petition was signed and passed around for Nike to drop him as an endorser. The Grove shopping center in L.A. (where TV shows regularly interview celebs) banned him from mall premises, saying in their release that “The Grove is a gathering place for all Angelenos and not a place for intolerance.” Boom.
Pacman eventually clarified that everything he said had been misquoted and, for god measure, issued an apology to the gay community at large: gay is fine, gay marriage is not. "What I'm critical off [sic] are actions that violate the word of God. I only gave out my opinion that same sex marriage is against the law of God."
The writer of the original story also fessed up and backed up Pacquiao's clarification. "I sincerely apologize for the confusion my column has caused. I certainly do not represent Pacquiao nor his team," he wrote.

Oh, the wait, too. And all the back and forth bickering about many many things; including money, pride, bragging rights, and accusations by Mayweather that Pacman is a user of performance enhancing drugs (or PEDs). Mayweather also insulted the country by saying that The Philippines is a haven for top-notch PEDs. In any case, as the words fly back and forth and terms are negotiated over and over again, everybody’s sure that when this fight does happen (oh, please let these two meet in the ring) it’ll be classic and full of fury.

When accused of infidelity, always go Clintonesque. But Manny getting ambushed and asked point blank if he was having an affair with Krista Ranillo (actor Matt Ranillo’s daughter and his “Wapakman” co-star) made him blurt out: “No comment.”
Juxtaposed with images of an unknown woman hurriedly leaving the studio after his guest spot at “Jimmy Kimmel”, those two words didn’t help Manny’s case any. The Manny-Krista Scandal became such a big deal that a tearful Jinkee at the Thanksgiving mass following Pacman’s victory in 2010 against Miguel Cotto became a widely circulated image – that of an embattled wife put upon by her husband’s cheating ways.
Pretty much the same rumors surfaced when he worked with Ara Mina but an “accidental” meeting with Krista in Hong Kong (they were on the same flight coming and going), and another one in Las Vegas served to fuel this one. But still, if we were to pick an adventurous, free-spirited and girl-kissing woman (hi, Mocha), good choice with Krista, Manny.

Being an eight-division world champ with 10 world titles and the second highest paid athlete in the world is nothing to your mother, who’s said in interviews that her dream long ago was for Manny to become a priest. Mommy Dionesia Pacquiao can still scold you (and the pastors around you) for many things, including abandoning Catholicism that (she believes) was the reason Pacman got KO’d by Juan Miguel Marquez last year.
Watch her conjure up a storm of outrage:

Or aim her ire at the BIR:

If you’re a boxing fan you’ve likely already seen the video of Manny’s coach Freddie Roach getting kicked in the chest by former strength and conditioning coach Alex Ariza in an altercation in Macau. Stay classy: kick an old man with Parkinson’s.
But long before Macau, just before the Pacquiao-Margarito fight In 2010, Roach had been quoted saying that he would personally supervise and check Margarito’s handwraps before the fight to be sure that everything was in order. It was then that the videographer of the Margarito camp told this to Robert Garcia. Together, they then made a video mocking the words of Roach by taking a steel hammer head and making fun of Roach’s words. They did this by superimposing the hammer against Garcia’s fist, and all the while mocking and laughing as they filmed the thing. This was effectively the first shot fired in this foul war of insults that culminated in that weird teep.
Pacquiao showed class and poise this time as the bickering enveloped his camp: "It doesn't affect me," he said. "[It's] business as usual and of course always outside the ring, always love one another."

What happens after you come back home, fresh from your unanimous decision victory against Brandon Rios in Macau? You find your bank accounts frozen because of an alleged P2.2-billion tax liability. What you are is gobsmacked. What you are is financially paralyzed.
This tax case reportedly arose from an alleged failure by Pacquiao’s accountant to report his income tax returns (ITR) the multi-million-dollar taxes collected by the US Internal Revenue Service (IRS) from his prize winnings for the years 2008 to 2009. Just like his issues with the BIR back in March of 2012, Kim Henares and Co are now out to collect this oversight with interest with their “name-and-shame techniques.”
Right now even his Congressional employees can’t get their salaries, and it looks like a no-ham Christmas for the Saranggani Rep’s staff. The Tax Goliath may prove to be Pacman’s most formidable opponent yet.

Please post your thoughts/violent reactions in the Comments Section.