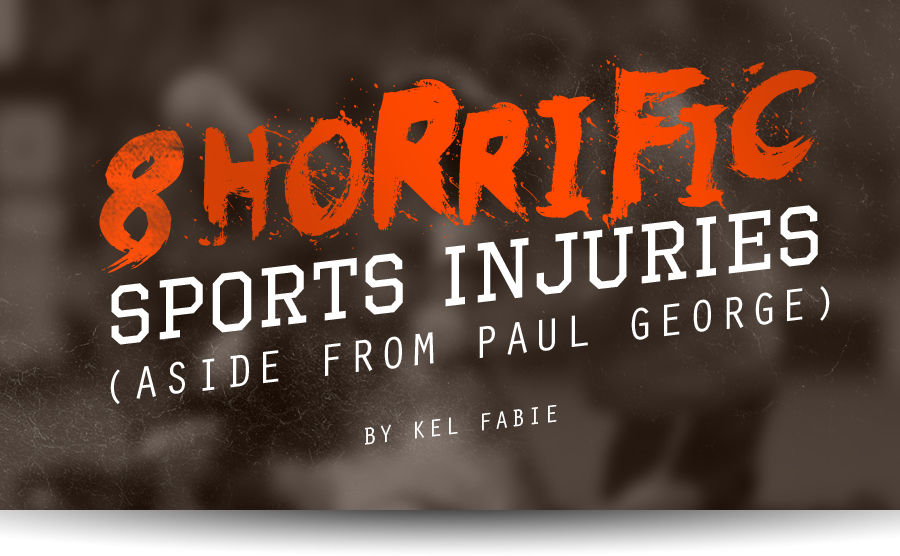 [dropcap letter="S"]ports injuries happen all the time. A little ding here, a little bruise there, but every now and then, some of these injuries become so grisly and disturbing that, well, sports networks decide to keep playing it again and again every single time a huge injury happens to another athlete.
Recently, in a scrimmage for Team USA, Paul George of the Indiana Pacers suffered one of those horrific injuries. Here's a visual aid:

Let's look back at just a few of the other sports injuries out there that make the lazy ones among us feel much better that we're just spending the whole day sitting on our couch and playing NBA 2K14 instead of actually playing some basketball. Obviously, we need not warn you that what you will likely see from these videos are rather graphic in nature, so don't read this list over lunch, okay?

Via scifighting.com
The Injury: A broken leg.
Yet another understatement right here, but it's still apt. The pro wrestler known as Psycho Sid was never known for his high-flying ability, what with him being nearly 7 feet tall and well within the ballpark of 300 pounds of almost pure muscle, yet someone must have had it in for him when he was asked to do a big boot spot from the second rope. What happened next would have been far more gruesome if not only for the fact Sid was wearing a boot that kept  people from seeing the worst of the injury. Surprisingly though Sid still does independent bookings here and there to this very day.
This was exactly what the WWE meant when they said “don't try this at home.”
See For Yourself:

Via youtube.com
The Injury: A dislocated spine.
The footage looks blurry, but in the video, you can see Eugene “Tej” Tejada defending against a layup by Roger “Ya” Yap (I'm not very creative with these nicknames, am I?). Moments afterwards, Mick Pennisi falls on him.(For some reason, I don't have a nickname for him.). That subsequent fall dislocated Eugene's spine and left him paralyzed for the next five years. To add salt to the injury, his girlfriend broke up with him shortly after the injury.
While his basketball career is clearly over, it's no small blessing that the man still managed to walk again.
See For Yourself:

Via TXT
https://mmanewsblog.wordpress.com/2013/03/28/rodrigo-damm-vs-mizuto-hirota-targeted-for-ufc-on-fuel-tv-10/
The Injury: A broken arm.
The hammerlock may not look like a glamorous submission hold, but there's a reason why it's one of the first ways a policeman restrains a potentially violent perp. Shinya Aoki utilized this move on his opponent, Mizuto Hirota, who inexplicably refused to tap out until his arm was completely broken. Proving what kind of a sore winner he was, Shinya then proceeds to get in the defeated Hirota's face to taunt him and even flip him a few birds. What a class act!
See For Yourself:(0:58 onwards)

Via /tomtheobald.photoshelter.com
The Injury: A concussion.
You have probably seen worse injuries in this list alone, but in the world of pairs figure skating, this 2004 injury has to take the cake, not to mention how downright dangerous the cumulative effects of concussions actually are to the human brain. Unbelievably though, Tatiana still managed to trust her partner after this, and they scored a Gold in the 2006 Winter Olympics.
The worst skating injury ever was unfortunately never caught on tape: that would be the injury Nancy Kerrigan sustained thanks to Tonya Harding. The raw footage taken here wasn't able to capture the attack.
See For Yourself:(Around 2:05) 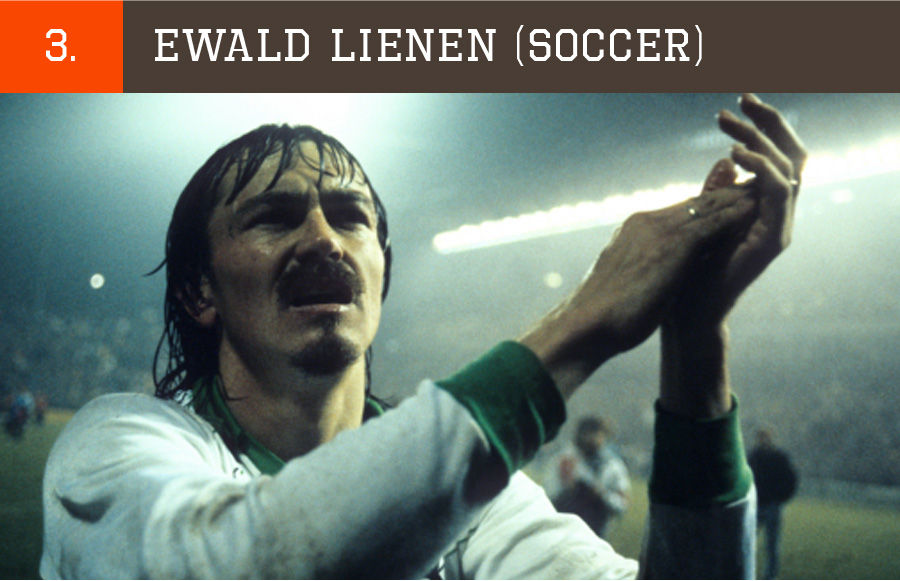 Via 11freunde.de
The Injury: a gaping gash on his leg.
We've had a couple of leg breaks on this list so far, but how about a scratch? When your mom tells you "gasgas lang yan," this is clearly not what she has in mind. Ewald Lienen shares this sentiment.
See For Yourself:

Via sportsnet.ca
The Injury: A slashed throat.
This is the reason I've always been afraid of ice skating. It's one thing to fall on your back and then trip a bunch of roller skaters over in the rink, but it's a whole 'nother thing to have people skate over you with steel that could possibly decapitate you if they were going fast enough. Clint Malarchuk, in 1989, was a goalie for the sabres, and ended up having his carotid artery slashed by the blade of an ice skate. The incident was graphic enough to elicit over-the-top responses from the audience, including two people who suffered heart attacks over the grisly sight of a man bleeding from the throat.
Thankfully, the team's trainer on hand knew how to keep Malarchuk from bleeding to death by pinching the artery until surgeons could get to him. On the way to the hospital, he was even asking the paramedics if they could get him back to the game by the third period.
In a mere matter of one week, Clint came back to play for his team as if nothing happened. Canadians are every bit as tough as they are polite, apparently.
See For Yourself:

Via bigstory.ap.org
The Injury: Fractured testicles.
As a catcher, your job is to squat all day, leaving your crotch region wide open for a baseball to hit. Thankfully, the pitcher tends to be your teammate, so that normally should never be a worry. But not for Chris Snyder, who had the misfortune of taking a wild pitch to the family jewels. Snyder was always known as a ball-busting player, but nobody expected him to live up to his rep quite literally. As a guy, it should be clear why I consider this the worst injury on the list.
See For Yourself:(Around 0:40)