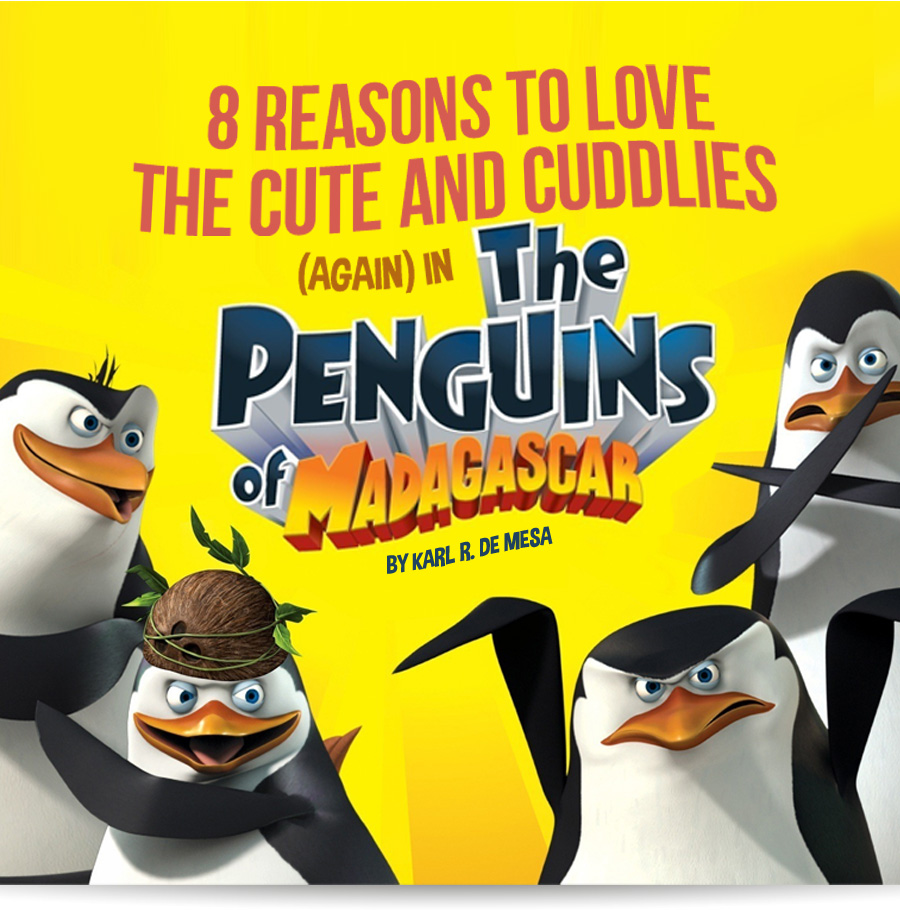 As if you needed more motivations to make the cute and cuddly Antarctics a part of your cartoon life, right?

It’s really way past time Skipper, Rico, Kowalski, and Private got their own spin-off from the Madagascar franchise since they really are a big part of the appeal of those movies -- no offense meant for Alex, Marty, Melman, and Gloria.

I tell you this: Anyone with an interest in the origin and adventures of the Madagascar penguins will love this spy meets DIY-warriors adventure. Hail Skipper, Kowalski, Private, and Rico as the cartoon characters who embody the only apt response to our convergence-saturated, surreal times: a flipper chop to the back of the head delivered with no regrets and the certainty that the spirit of flightless Antarctic birds is not in tap dance but in derring-do.

The movie opens on a trio of baby penguins, soon to become Skipper (Tom McGrath), Kowalski (Chris Miller), and Rico (Conrad Vernon), committing their first act of rebellion when they step out of the lemming line and question the act of migration.

Soon, they meet up with Private (still an egg), when he rolls down an ice slope and gives the guys a chase to the cliff edge. We fast forward through the three Madagascar movies and find them at the Russian circus in the third one. It’s en route to their next adventure that the four are suddenly kidnapped and flown to a submarine base in Venice, Italy. And it’s there that they meet their nemesis -- albeit they didn’t know they even had one: Dr. Octavius Brine, actually an octopus named Dave (John Malkovich) disguised as a human scientist, and his octopus minions with burbly accents. 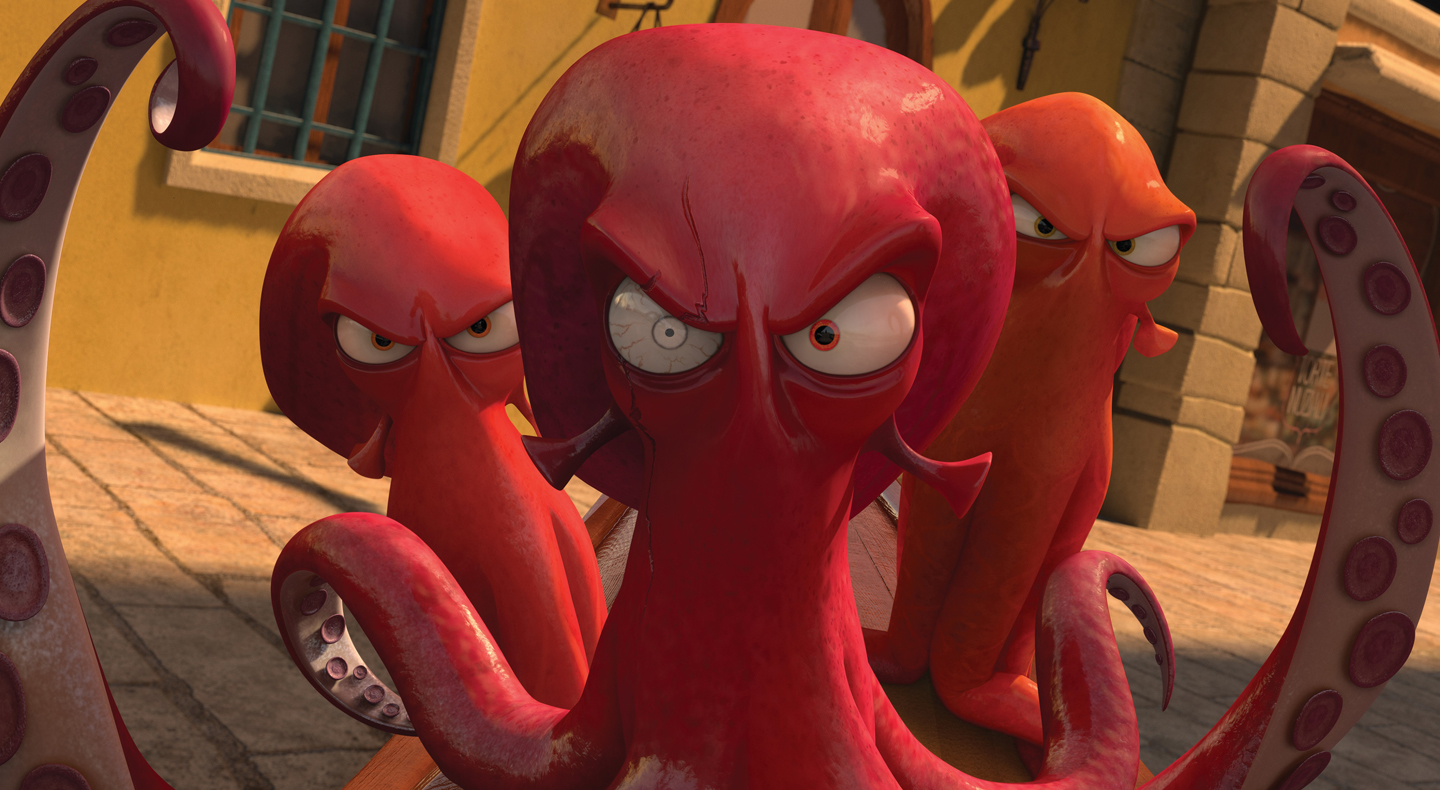 Apparently the penguins caused Dave no small amount of pain back at the Central Park Zoo by getting him transferred. But Skipper and co. never knew about it. Soon, the penguins are at the tentacle-end of Dave’s nefarious plans for vengeance upon, not just the four, but all of penguin-hood.

As capable as they are, they are soon in dire straits and need to be rescued. Fortunately the organization known as North Wind, an espionage inter-species task force, swoops in to save the day.

Much to the chagrin of the proud and vain Skipper and co. Soon, the suave tech and meticulous strategy that is the North Wind’s style of spying clashes with Team Penguin’s on-the-fly bravura and DIY-punkiness. Can they find a way to work together or will their inner conflict tear them up and let Dave win over all penguins?
While it’s a given that the chemistry and attitude of the penguins versus their fuzzy hugginess carries the day, the rest of the animals characters are no slouch going up against all the Antarctic chutzpah.

Benedict Cumberbatch’s Classified, a wolf and leader of the North Wind espionage cell that the penguins encounter, holds his own albeit hardly when he goes up with Skipper in the inspiring speech department. Plus, his squad has way cooler gadgets and spy toys. He’s also got a polar bear named Corporal (voiced by frequent Russian guy Peter Stormare), which puts him points above the agent recruitment game in my book. I mean, if you’re choosing a cold weather-based spy squad name you just got to have a polar bear in there, man. 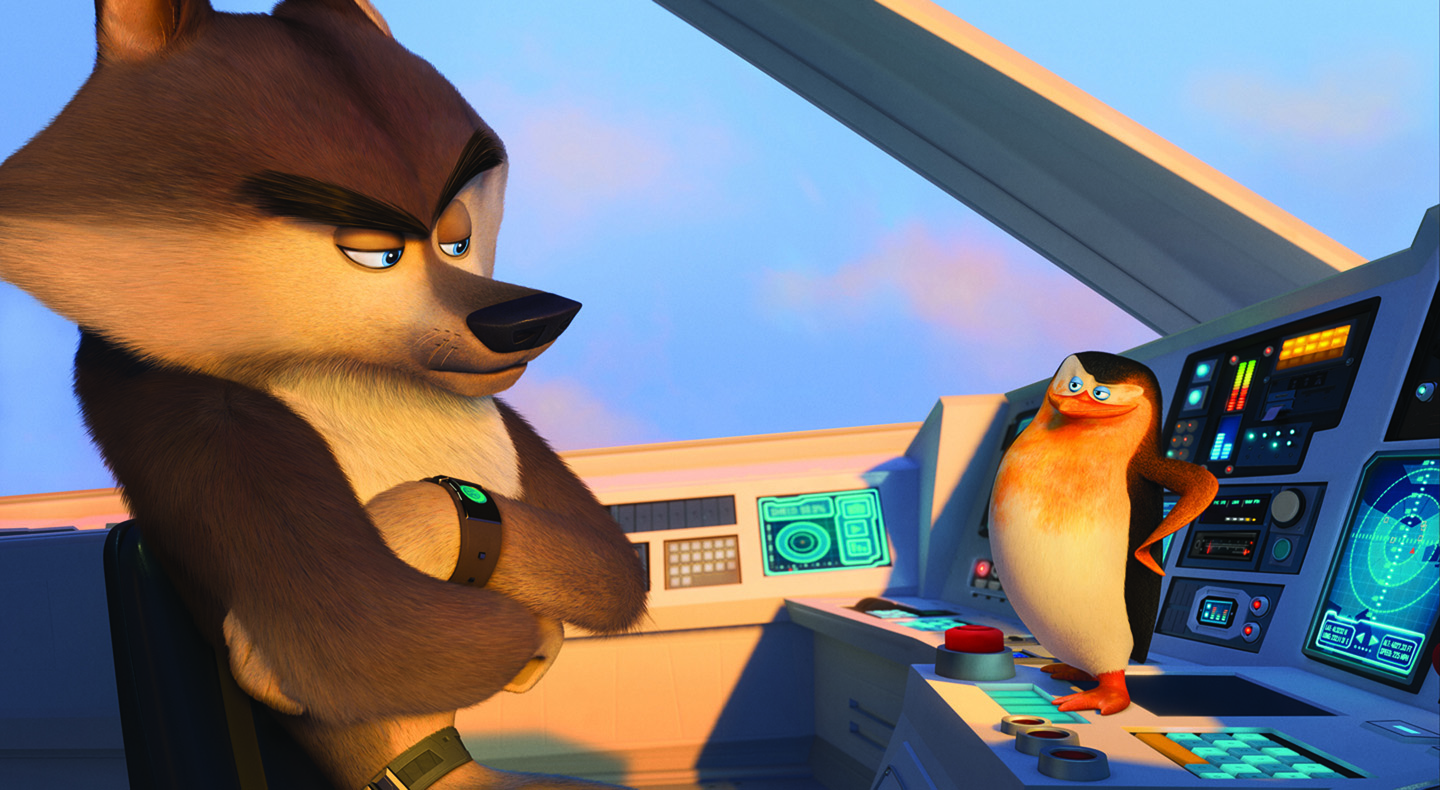 It’s like the penguins are a bunch of guerilla misfit spies with DIY tools and the North Wind animals are the pro leaguers in the CIA or KGB who get all the whiz bam kapow boom equipment and training. Of particular interest is the seal named Short Fuse; Ken Jeong voices him with acerbic charm and cuteness enough to spare for two penguins – but likely not Private.

With a special guest cameo by Werner Herzog himself (guess who?!), you shouldn’t miss this one not only because the penguins pull off some of the funniest acts of adventurism known to the flightless flipper birds with panache and James Bond-level one liners, but the architecture of the story is dramatic enough without being cheesy, and accessible enough without looking down on the adults who do love watching animated films.
To paraphrase Marty the Zebra, the penguins are psychotic, the penguins are cute and cuddly, and they also come in IMAX 3D. Get me my Cheesy Dibbles, mom!

The tasty snack of choice for the penguins and majority of the animals, this cheesy treat full of, well, zero vitamins and minerals and total junk food is allusive of, and a caveat for, many of today’s bad treats in a nifty plastic pack.

Dave the Octopus has gotten away with a lot in the scientific field and the media disguised as Dr. Octavius Brine but he soon meets his match with the penguins he so despises. My new fave creatures are the octopi henchmen who have this burbly, undecipherable speech--adorably like a tribute to the Cthulhu mythos done in Dreamworks style. They’re also like the Minions in “Despicable Me.”

To Dave, the Penguins are the story’s true villains. “These Penguins ruined his life by stealing all the attention and just standing there or waddling around, while Dave actually performed tricks and acrobatics, only to have people ignore him,” said Dave’s voice actor John Malkovich. “So he has very strong feelings about the Penguins, but they aren’t even aware of him. Which makes them even more annoying to Dave!”

Malkovich quickly embraced his inner mollusk, but was also eager to give Dave’s thirst for vengeance some subtext. “We strategized with John and came up with the idea that this film is the third act of Dave’s life,” said director Simon J. Smith. “Dave’s plot is the culmination of ten years of planning, which entails kidnapping the Penguins, developing a transformative technology that will change Penguin-hood forever, and disguising himself as a human. All that subtext made the role much more fun for John.”

The North Wind are an undercover inter-species task force and the squad that saves the penguins and liases with them to defeat Dave is comprised of a wolf named Classified (Benedict Cumberbatch), a demolitionist harp seal named Short Fuse (Ken Jeong), a muscular polar bear named Corporal (Peter Stormare), and an intelligent snowy owl named Eva (Annet Mahendru). Kowalski instantly becomes smitten with the classy owl.

The Penguins are ever-confident in their ability to deal with Dave’s insidious plans, but a group of covert operatives known as The North Wind (their motto: “Nobody breaks The Wind!”), who help animals in need, do not think the guys are up to the task. In fact, the members of The North Wind do everything they can to take over the mission to stop Dave, much to the chagrin of Skipper and the gang. But it’s a safe bet that all the uber-spies of The North Wind will come around to the penguins’ methods.

Consider the origin story of our future master spies and it shall be revealed that they were little bundles of cute being filmed by documentary crews in the Antarctic. Cute and cuddlies even when they were boys!

Yes, there is a Penguins game for your Android or iOS device! Behold “Dibble Dash”. We’ve tried it, it’s pretty slick.

The game sends you with the penguins on a TOP SECRET mission which is educational, fun, and full of danger for the furry and flightless!

SKIPPER: “Cause me and the boys have been perfecting years of secret agent speed, agility, lightning reflexes, and finding the perfect Cheesy Dibbles (critical in any mission). In our latest adventures, Penguins of Madagascar: Dibble Dash, we twist, turn and what seems like running endlessly into an adventure like no other!”

Using quick, Penguin-like reflexes, swipe to control all four Penguins at once as they navigate through intricate courses and alleyways! You’ll have to move like Rico, think like Kowalski and learn like Private all while keeping it cool like me, Skipper, to keep us Penguins safe from mutant-creating goo.

Remember, physical strength will only get you so far. As Kowalski might say - brains are an important part of this operation.

App features also include: *Practice Math with the Penguins!  *Addition, subtraction, multiplication, and division *Use Power Ups for an extra boost! *Avoid the henchmen and mutant goo!

When the penguins teach you their brand of spy craft, you’re in for a time full of fun and intensity. Take a load of the courses for flipper martial arts, high-level disguise, transport hijack, weapons fundamentals, throat expansion luggage, and how to make like a pedestrian lane in advanced environmental camouflage.

Each of the penguins makes a memorable impression, and collectively, they’re a force to be reckoned with.

“The sum of the Penguins is greater than the parts,” said co-creator Eric Darnell. “The guys work incredibly well as a group – far better than they would as individuals. They’re like four parts of a complete brain: You’ve got Skipper’s leadership, Private’s heart, Kowalski’s smarts, and Rico’s courage. So the four of them make this whole, and that makes them a lot of fun.”

Tom McGrath’s Skipper is the team’s fearless leader and keeper of the Penguin code. He demands loyalty, obedience and order from his regimented flock, and asks nothing of his men that he wouldn’t do himself.

Skipper’s right-flipper man, Kowalski, voiced by DreamWorks animator Chris Miller, is the brains of the operation, and the go-to guy when the Penguins need a quick, life-saving fix.

The third member of the team, Rico, is “voiced” by DreamWorks Animation artist and “Madagascar 3” director Conrad Vernon. Rico lives to blow things up. When he’s kept on a tight leash, Rico is an effective weapon, but left to his own devices is a loose cannon.

Finally, there’s Private, voiced by DreamWorks Animation editor Christopher Knights; although he is the runt of the team, Private has the biggest heart of them all. Private is always up for new challenges, but because the group still sees him as the “baby,” he’s often sidelined during their missions.

The “Penguins of Madagascar” is currently screening in cinemas in in 2D, 3D, and IMAX 3D
All photos courtesy of DreamWorks Animation and 20th Century Fox.