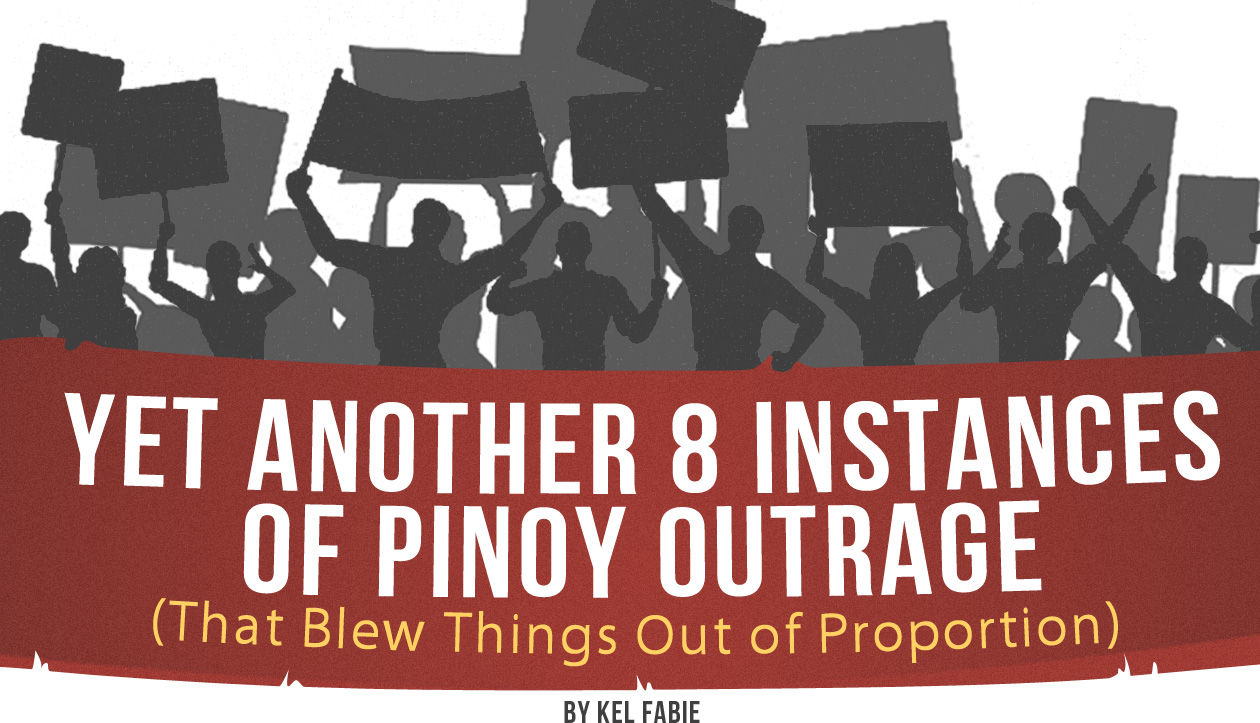 From Dan Brown to Divina DeDiva, you would think that after so many instances of #PinoyOutrage, non-Filipinos would be just a tad more careful about saying unsavory things about Filipinos, but you would be wrong. Like clockwork, it seems that a month wouldn’t go by without something earning our ire.

It’s not that we shouldn’t ever complain when we are targeted, or when racism is thrown our way. Of course not. Everybody has a right to feel how they feel. It’s just that sometimes, we need to have some perspective about things, and especially realize that the world doesn’t revolve around us Filipinos. We don’t like it when some Americans do it. It should likewise not be okay when we do it.

Whether warranted or not, it seems our first reaction to any perceived slight against us is a good ol’ dose of Pinoy Outrage. Here are 8 more instances when we decided to raise a stink just because we can.

The Controversy: In 2011, Google was accused by the National Asian American Coalition of not hiring enough Filipinos.

The Outrage: Dozens of protesters flocked in front of Google Headquarters to lament the supposed lack of diversity in Google’s hiring practices, chiding the search giant for mainly getting Indians, instead of training Filipinos to become competent enough to join their workforce, which is only 4% Filipino.

But Then: Hold on a minute. 4%? There are 317 million people in America right now, and approximately 3.4 million of those are Filipino-Americans. That accounts for merely 1% of the country’s population, yet Google hires four times as many Filipinos. Somehow, even that isn’t enough, and the onus is on a private corporation to train Filipinos with the intention of hiring them. That sounds totally reasonable and in no way comes off as feeling entitled at all!


7. The Philippine Government vs. Michael Martinez

7. The Philippine Government vs. Michael Martinez

The Controversy: Michael Martinez, the first Southeast Asian to make it to a medal round in the Winter Olympics, supposedly went to Sochi last February with zero help from the Philippine government, who was apparently too busy paying blood money for a convicted killer in the Middle East to help out one of our athletes.

The Outrage: When word got out that Martinez’s family had to mortgage their house to send him to Sochi, the outrage was overwhelming, coming from the sudden thousands of Pinoy figure skating experts we didn’t even know we had. While the government normally gets a lot of flak from its citizens, this whole episode still stood out because…

But Then: Whoops. Turns out, the government did help out. This isn’t the first time we were quick on the draw with castigating the government, either, if you recall the Faye Nicole San Juan incident. Patricia Evangelista would rather you didn’t, though.

The Controversy: I don’t even get why this is controversial at all, but during an NFL game last November, Filipino-American wide receiver Doug Baldwin carried the Filipino flag in a show of support to the country in the middle of Yolanda. It just so happened that the flag was carried with the red side up.

The Outrage: I can only be very thankful that it was a vast minority of Filipinos who did this, but some of them actually had the gall to lambast Baldwin’s gesture because of the fact that the flag was, in their eyes, upside-down. Enough people got upset for Baldwin to issue an apology over it.

But Then: True, the flag was raised upside-down. What most people fail to realize is that this serves as both a distress signal and a representation of wartime. The former applies to us literally, while the latter applies to us symbolically, and what is the act of carrying a flag in support of our nation, if not a symbolic gesture?

The Controversy: This relies on a whole lot of hearsay and conjecture, since Mr. Bonolis was speaking in Italian, but supposedly, on his television program, Paolo Bonolis impersonated Filipinos, and used the Philippine National anthem in his skit, which apparently constitutes disrespecting it. Frankly, I don’t really know what the gripe was about, and you would think that most of the Pinoys who don’t understand a word of Italian would be a little less hasty about it, but there you go.

The Outrage: The issue, if you look at the comments here, got to the point that the Philippine Embassy to Italy got involved, and apologies were handed out. Well, all’s well that ends well, I suppose?

But Then: I honestly feel very uneasy about the fact that, if only based on our TV programming, we can be pretty racist ourselves. DJ Bumbay? Nita Negrita? How about the casually racist comment “kaya pala matataba ang mga Mexicano!” in one TV news feature about Mexican food? Or Miriam Defensor-Santiago, as beloved as she is, calling the Chinese people the “inventors” of corruption? Why is it okay when we do it, but not okay when others do it?

The Controversy: Welp, it’s the "Anchorman 2." Ron Burgundy has never been known as the paragon of political correctness, what with the sheer amount of sexism, racism, and ableism you can find in their jokes all over. Just to make sure they hit even more people in the sequel, they decided to make a joke about Filipinos eating cats and dogs. Which, yes, some of us do.

The Outrage: The Inquirer was quick on the draw with this one. Their columnist even went as far as to suggest how to “repair” the “damage” caused by this Anchorman joke, which falls in line with the other racist jokes they employed, but the writer insists that we Filipinos had it worse than any of the other races the film poked fun at. Because we’re special like that.

But Then: Here’s what people, and not just Filipinos, mind you, don’t understand about comedy-anything can be made funny, no matter how taboo the subject. Should we complain about people poking fun at the expense of Filipinos? Well, we are free to do so. But should we insist nobody ever make these jokes? I would rather err on the side of freedom than resort to censorship like that. Comedy should be willing to push the envelope from time to time, and deal with the consequences if they cross the line after.

The Controversy: This one’s fairly recent, but here goes. Raul Dancel, a Filipino, recently went back to the country after seven years in Singapore. What greeted him in the nation where he lived most of his life ended up jarring him to the core, as he compared how seemingly behind the times the Philippines is compared to Singapore. He then wrote about his experiences and feelings.

The Outrage: It didn’t take long before the comments section blew up with people who felt offended at the picture Dancel painted. Even those who would normally agree with his viewpoints felt that his condescension and near-patriotism for Singapore reflected a kind of ugly and destructive critique on the country rather than a constructive one that would likely be offered by a citizen who actually loves his country.

But Then: Outside of linguistic differences, was there really anything Dancel said that was patently untrue? Take away the tone of his message and listen to what he’s saying. Aren’t we also complaining about the very same things?

The Controversy: When the Cesar Chavez biopic premiered in the United states, the film depicted the Mexican leader’s revolution in the farm labor movement. Apparently, several Filipinos were actively a part of this movement. As one would expect, they ended up downplaying the contributions of these Filipinos in the film.

The Outrage: Filipinos protested and marched out, and the son of Larry Itliong himself stressed his pivotal role in the events surrounding Chavez’s revolution. He felt that it was instead glossed over in the portrayal, making him merely a spectator than a proactive ally to Chavez.

But Then: Not that this makes it okay, but racewashing is a common practice in films all the time, and what is clearly a patriotic film for Mexico naturally would lean towards focusing on Mexicans than Filipinos, for very obvious reasons.

The Controversy: Agness and Cez, two Polish travelers, went to the Philippines to try out our food. They were terribly disappointed when they got to our street food, which they expected to be on par or even better than what our Thai or Indonesian neighbors have to offer. They even went as far as to say that they would rather go hungry than eat Filipino food again, although they amended that to say Filipino street food, after the story blew up.

The Outrage: Pamie Ribon, her of Jollibee fame, would be proud. Raging commenters skewered the blog post and called it “racist,” despite the fact that saying you don’t like a particular culture’s food in no way says that you hate the said culture as well. Meanwhile, Agness and Cez probably raked in the money from AdSense or something, thanks to the ridiculous amount of traffic their blog got from angry commenters.

But Then: Didn’t they pay for their food, and aren’t they entitled to not like the food they ate? Let’s face it: they made some poor choices where to eat, and on the whole, their experience of Filipino food was simply not to their liking. Who died and gave us the right to stifle other people’s right to an opinion? Also, a word of warning to anyone who wishes to try Filipino cuisine: if you don’t like rich food meant to leave you in a food coma, then Filipino cuisine may very well be not for you.

So, what do you think? Post them thoughts in the Comments Section.