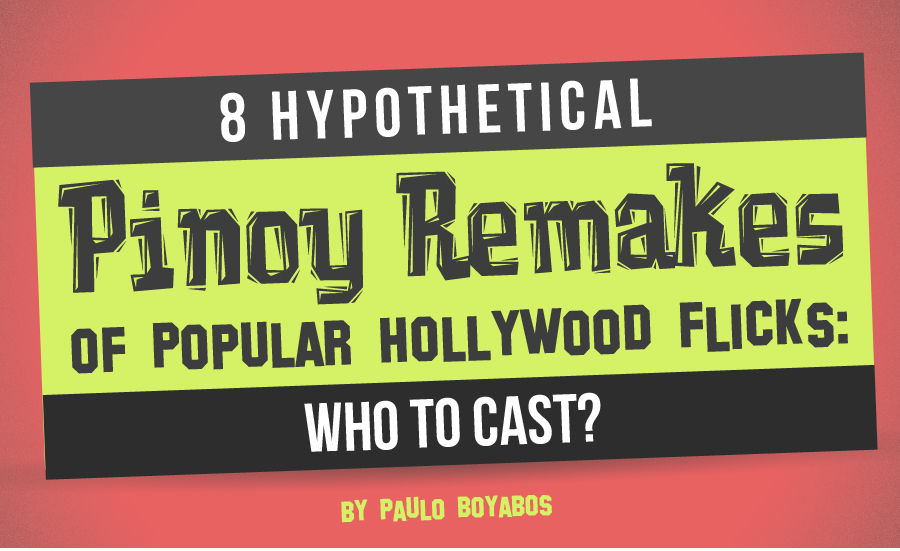 This post will probably get a lot of flak for comparing our local talents to foreign standards (again) but screw it; nothing’s wrong with fantasizing about giving some of our favorite Hollywood films our own Pinoy flavor.

Besides, it’s not as if we haven’t actually done that before: We did our very own version of 1993’s Mrs. Doubtfire with no less than Dolphy in 1994’s Wanted: Perfect Father. In 2000, the chick flick Kailangan Ko’y Ikaw starring Regine Velasquez and Robin Padilla was a blatant — if not deliberate — take on 1999’s Notting Hill (the consistent one year gap is rather disturbing, isn’t it?). And of course, 2008’s Desperadas was obviously a Sexy and the City clone, with a few sprinkles of Desperate Housewives.
DISCLAIMER: The list below is completely hypothetical. It does not suggest that Pinoy filmmakers should actually consider making these imaginary remakes. It’s more of a “what if” kind of thing. Capiche?
Now here’s the catch: this “fantasy draft” focuses on character adaptation — meaning, actors were chosen based on their appropriateness of playing the characters of their Hollywood counterparts, whether or not these local stars are currently active or in-demand. These will not likely include today’s popular loveteams (sorry to disappoint you, KathNiel fans) or top-billing stars (sorry to disappoint you, KathNiel fans). We’re gonna have to dig deeper into our acting roster.
If you have better actors/actresses in mind, please do share your suggestions! Here we go: 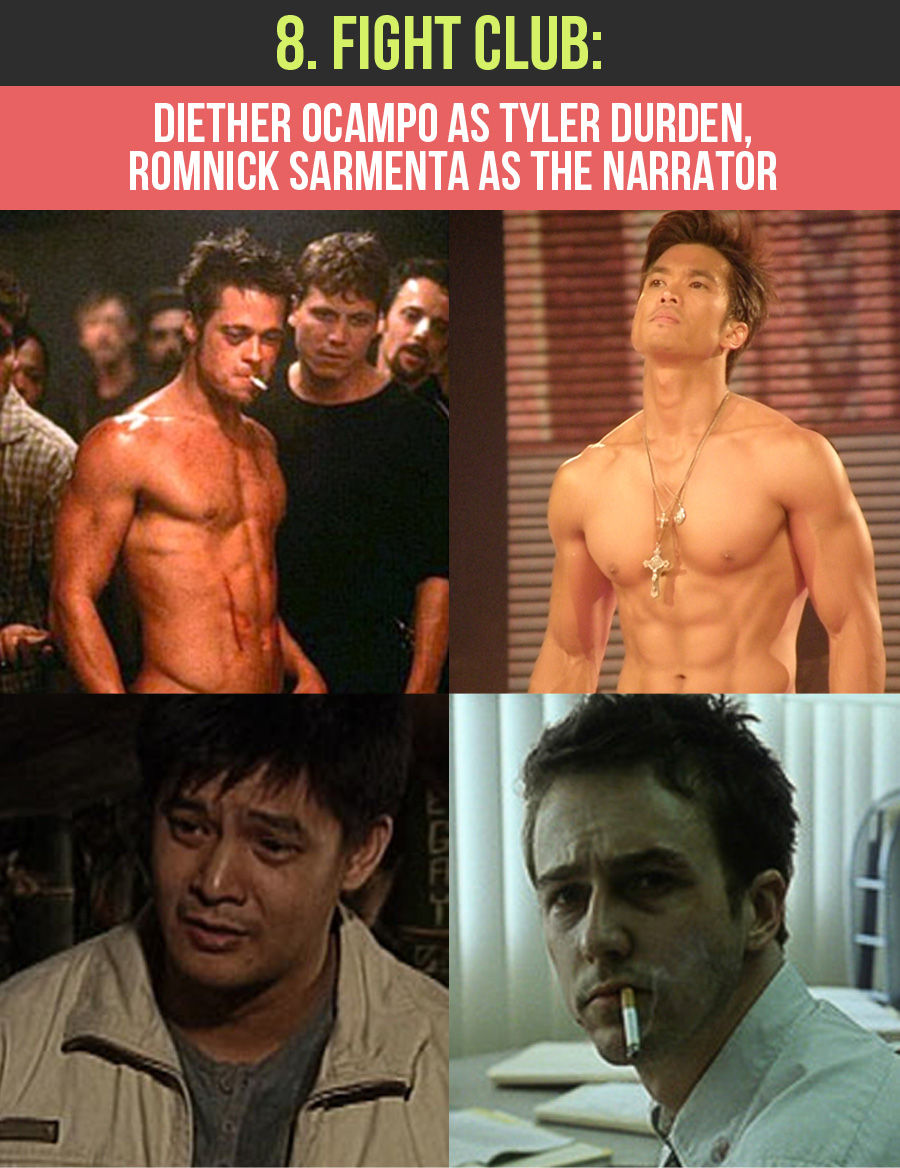 Via thecelebrityworkout.com, herinterest.com, animation-addicts.com, kapamilyalogy.blogspot.com
Brad Pitt’s oozing testosterone and Edward Norton’s gloomy subtleties were the film’s greatest gems, aside from of course, the insane premise. For the Pinoy version, we need actors who can really throw a punch.
Post-Mula Sa Puso Ocampo can pull off both the raunchy, masculine type (see: 2007’s Rounin; 2002’s Jologs) and the charming, playboy type (see: 2001’s La Vido Rosa;2010’s Rubi), but he would have to play the role in his mid-thirties just like when Brad Pitt did it at 36 years old (Ocampo is 40 now—not kidding).
Just like Edward Norton, Romnick Sarmenta can be the average Joe-ish type that has the tendency to unleash a darker side (see: 1998’s Berdugo) and he also has the chops the play a miserable man (see: 1994’s Bawal na Gamot).
Both can be an okay fist-fighter with proper training. Now all we need is for Ocampo to hit the gym (more religiously) and for Sarmenta to lose a lot of weight, and we’re on. 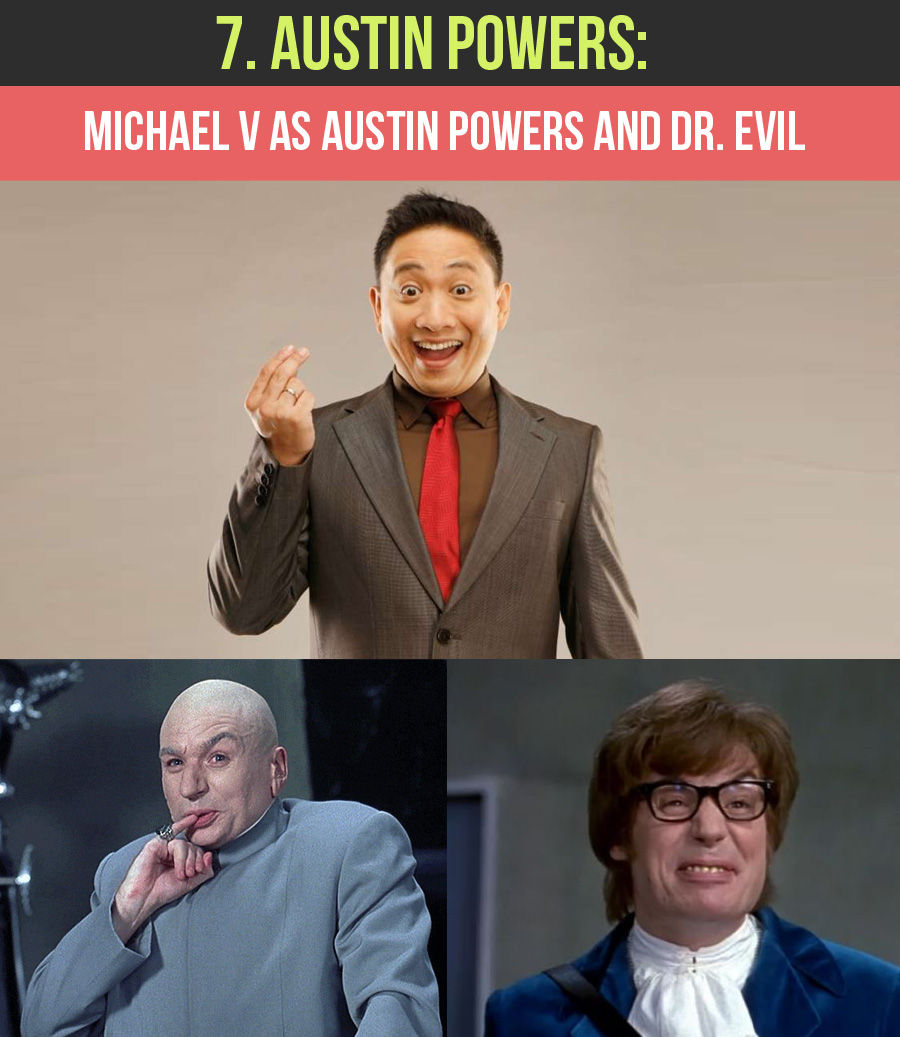 Via dailymail.co.uk
Need I elaborate? Michael V thrives on playing multiple characters, has an equally-hypnotic laugh, and possesses the comedic timing akin to that of Mike Myers’. Come to think of it, he’s the only Pinoy comedian with enough mojo to give justice to that role.
Throw in Solenn Heussaff and Ellen Adarna for good measure. Potential casting problem: Mini Me 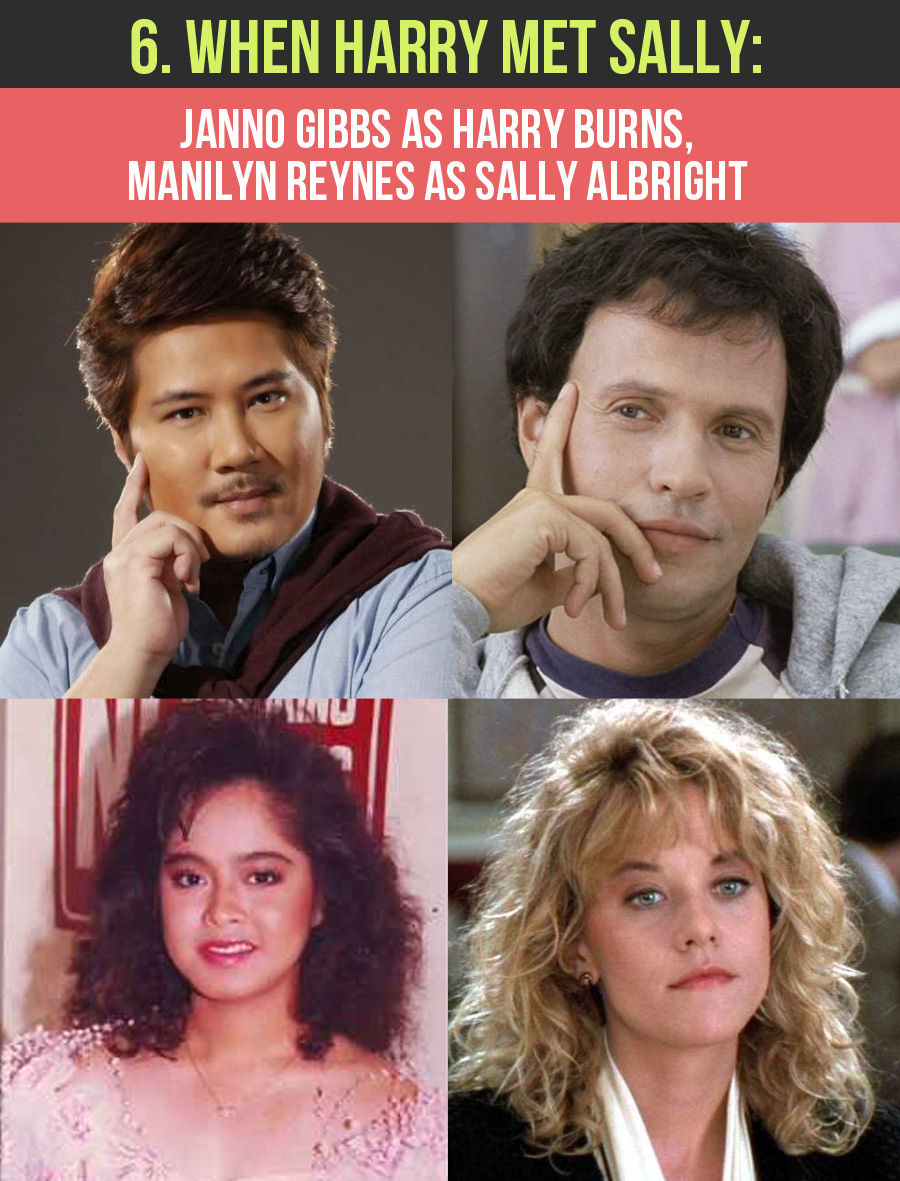 Via showbiz-portal.com, pyxurz.blogspot.com, alvin-villanueva.blogspot.com
This 1989 Billy Crystal-Meg Ryan rom-com is widely considered as one of the best in its genre. At that time, a local pair was also rising to its peak: Janno and Manilyn. The love team (which once became a real-life couple) started out as secondary characters (see: 1989’s Magic to Love; 1990’s Feel na Feel) and eventually top-billed their own films (see: 1991’s Kung Sino Pang Minamahal).
But they were only teenagers then. If they were to play Harry and Sally, the perfect time would be in their late twenties, which would be around 15 years ago. Janno is a top-notch comedian who could foray into romantic films effortlessly (much like Crystal), while Manilyn has a strong personality that matches that of Sally’s (imagine her doing the “fake orgasm” scene in the restaurant). Also, the film follows a 12-year story; Janno and Manilyn (in their twenties) would be perfect to play aging roles. Also, chemistry. That, you can’t fake. 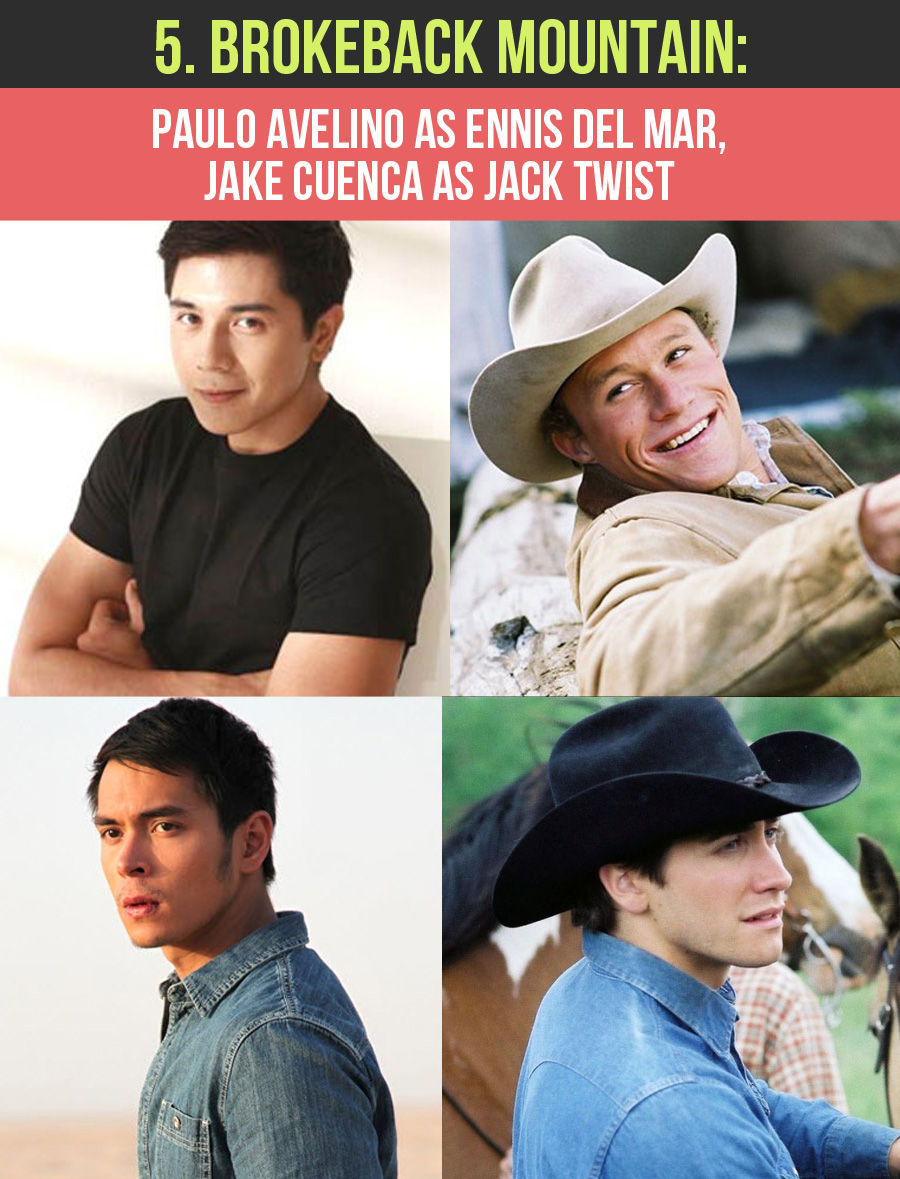 Via emirates247.com, rogerebert.com, starmometer.com, fanpop.com
The obvious choice would be Baron Geisler and Dennis Trillo, both of whom had previously meandered through homosexual role territory. The problem is that they both lack the cowboy masculinity inherent in both Heath Ledger and Jake Gyllenhaal.
Paulo Avelino has that mysterious boyish charm similar to Ledger’s, and he also has the acting chops to back it up. Jake Cuenca has that roughness in him that resembles Gyllenhaal (hey, they’re both Jake, too!)  Cuenca has also been in the same-ish role in 2013’s Lihis, where he and co-actor Joem Bascon shocked everyone with their passionate love scene. It would be very interesting — ahem, in an artistic way — to see both Avelino and Cuenca get it on and maintain that forlorn, tough-guy persona. 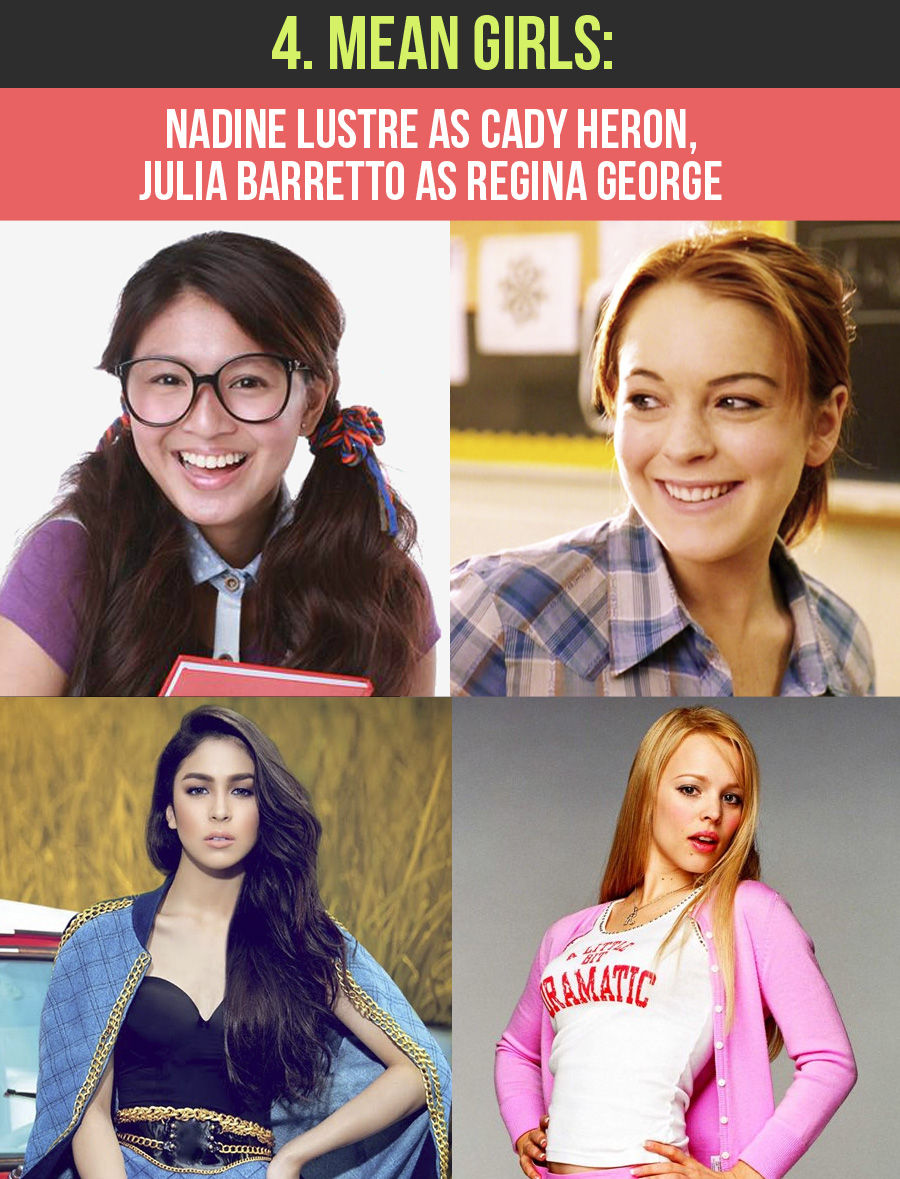 Via pyxurz.blogspot.com, nadinelustre.com, fashionmediaph.blogspot.com
What? Too young? Lindsay was only 17 when she did that movie; Nadine’s already 20! Besides, Nadine’s face can look very innocent and devilishly sneaky at the same time. She has that girl-next-door aura but she also has the Lohan swag. Plus, she looks like she’s good in Math, so…
Now for the “plastics”.
The role of Regina George can be easily pegged on someone with a Denise Laurel-ish vibe, but that would be too artless. Julia Barretto, on the other hand, may seem angelic on the surface (just like Rachel McAdams, dimples and all), but there is definitely potential for [movie role] bitchiness — preferably the Greta brand. Wait, aren’t they related? *wink*
Gretchen Wieners and Karen Smith? Janella Salvador and Jane Oineza. Done and done. 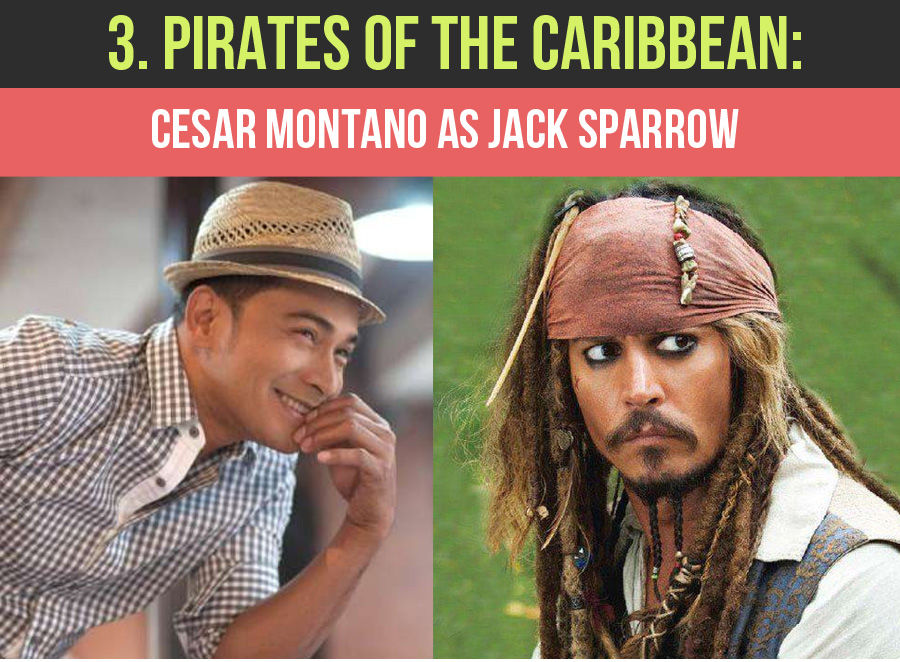 Via showbiz-portal.com, fanpop.com
Action star with skills? Check. Comedic timing? Check. Good looks and playboy charm? Check.
Cesar Montano, especially during his heyday (see: all his movies before 2000), was a true multi-dimensional actor. He has three — yes, three! — MMFF Best Actor awards and two MMFF Best Supporting Actor awards, most of which are not associated with action movies. And guess what, he also did a lot of comedy.
He’s no Johnny Depp, but he’s versatile in his own way. Sure, he’d look weird in a pirate costume (any Pinoy would), but he can definitely pull off Jack Sparrow effectively. Just think Muro Ami. Wait. Forget that last part.
Now Carlo Aquino would be Will Turner and Lauren Young would be Elizabeth Swann. Barbossa? Hmmm…Nonie Buencamino. Next! 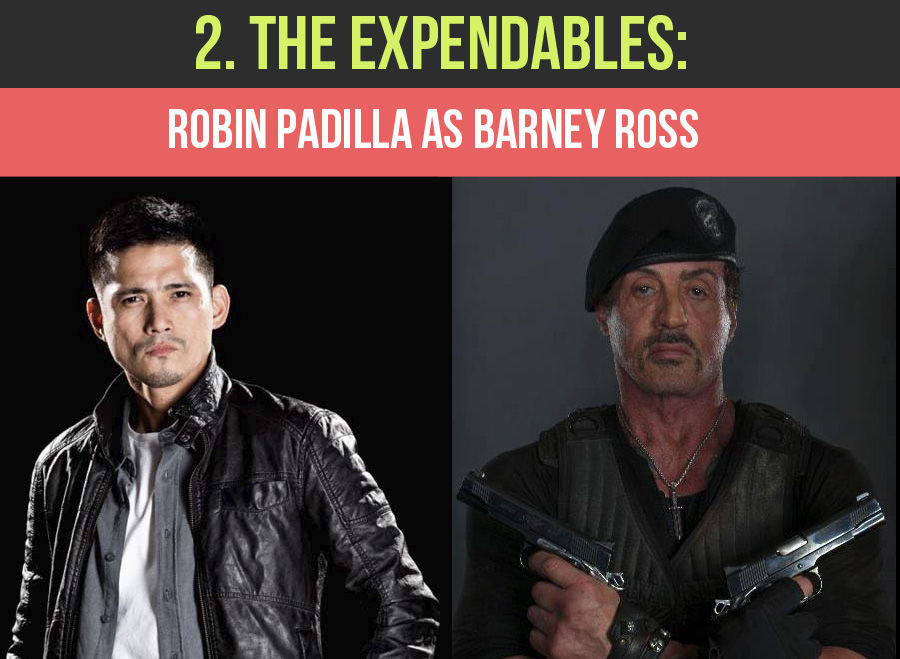 Via halukay.com, slystallone313.skyrock.com
If Rudy Fernandez were alive, he’d be the perfect choice for Sly’s character. Daboy has the leader persona much like Barney Ross. No disrespect to FPJ, of course. But if we were to choose among living actors, Robin Padilla would be the logical choice. No, it’s not going to be like Mistah.
For the rest of the crew, we could pretty much throw in every action star we’ve had. We’d start off with peak-Philip Salvador and peak-Cesar Montano. Then we’d have younger versions of Joko Diaz, Jeric Raval and Roi Vinzon. Then for the roles played by Bruce Willis and Arnold Schwarzenegger, we can have present-day Bong Revilla and Lito Lapid. If you wanna go deeper, Erap should be in there somewhere, too.
Wouldn’t that be awesome? If Lito Lapid can single-handedly kill hundreds of goons with a .45 without ever reloading, imagine what the Pinoy Expendables crew could do. 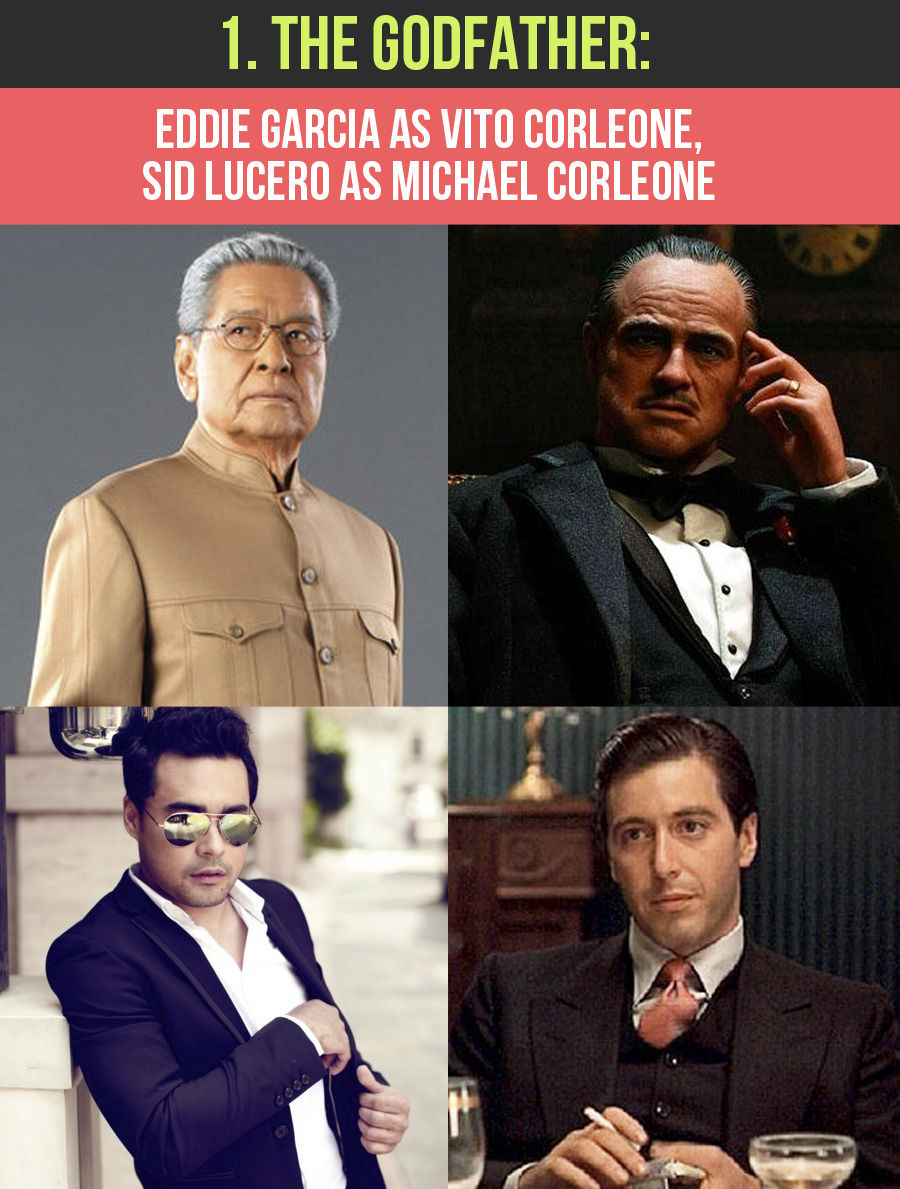 Eddie Garcia as the Don is a no-brainer. Who else would play that part? The real challenge is to cast Michael. He would have to look very innocent early on, but would swiftly transform into a cold-blooded maniac with razor-sharp cleverness but in the most subdued way.
A decorated actor in the indie film scene, Sid Lucero has enough depth to be a young Pacino (see: 2007’s Tambolista and Selda; 2010’s Muli). His smile is guiltless, but when his face turns serious, he has that fiendish pensiveness that can give you the chills.
Hot-headed Sonny would be played by Joko Diaz, and Consigliere Tom Hagen would be played by a younger John Arcilla. And everyone who was in that recent Asiong Salonga movie.
Now imagine Eddie Garcia saying, “Aalukan ko siya ng isang bagay na ‘di niya matatanggihan."
[/whole]
[/row]