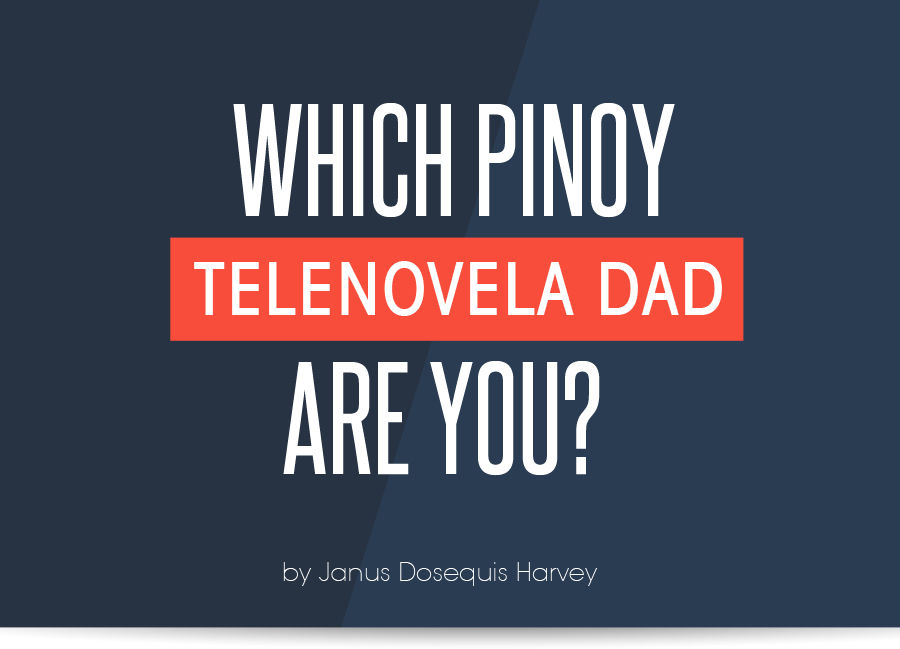 There are a myriad of parenting styles out there for moms. Contrary to what people might assume, dads are actually more of the same, even in the realm of fiction. Here are 8 memorable father archetypes from the world of Pinoy telenovelas.

Via tanghalangpilipino.com
As far as dads go, it’s your way or the highway. There’s something so ruthless and uncompromising about you that, like Stanley King, Sr., you really intimidate anyone who would try to so much as look twice at your daughter (assuming you have one). You’re not just a disciplinarian: you rule with an iron fist.

Via forumbiodiversity.com
Stern, but fair. You might be the sweetest guy ever to your wife, but this is about how you are as a dad, and not as a husband. Your kids respect you more than they fear you, because despite your strictness, they recognize that you’re after their own good. It’s very hard to toe the line between being a disciplinarian and a totalitarian, but you do it so well.

Via vebidoo.com
Your softer side shows only around your children. As far as dads go, your kids don’t know any other facet of you. They don’t know that despite your very soft exterior, you are very battle-hardened and will fight tooth and nail for the sake of your family. Sometimes, people do worry that you spoil your kids too much, though.

Via pep.ph
You want happiness for your children, but not if it means they will consort with your enemies. Like the star-crossed lovers of Romeo and Juliet, old rifts and rivalries get in the way of true love, and you are a willing pawn in this chess game played by the universe. Nonetheless, take away that one flaw, and your children can’t say a single bad thing about you as a father.

Via TXT
You are the epitome of manliness, and by jove, you will go through hell and back to make sure your sons turn out the same way. Everything about you just screams “masculine,” sometimes to the detriment of your wife, since you can’t keep all those women off of you, but ultimately, it’s a warped but desired picture that you want to project to your kids. Heaven forbid any of them turn out to be gay, though. That would be your worst nightmare - and theirs, too, since it isn’t like they chose to be gay, or something as patently ridiculous as that..

Via pinoypopbiz.com
Not even death could tear you away from loving your kids. You’re the kind of guy who is immediately changed by fatherhood, and for the better. Your kids love you because you really shower them with all your affection. Just be prepared for that terrible moment where they think they’ve outgrown you. Sadly, the more loving you are as a dad, the more painful that moment is.

Via starmometer.com
You think you were a bad dad, but try to redeem yourself in the eyes of your kids. It’s this tale of redemption that makes you such a compelling father, because your children can see the efforts you make to reach out to them. It’s never too late.

Via jrbustamante.wordpress.co
Everyone looking at you says you’re the perfect dad. They think you have it all, and fatherhood has only made you a better person. Unfortunately, what people don’t realize is that all it takes is one push for everything to come crashing down. It’s up to you to keep it together when the other shoe drops, because it always will.