8 Reasons It's Stupid to Worry About Ebola 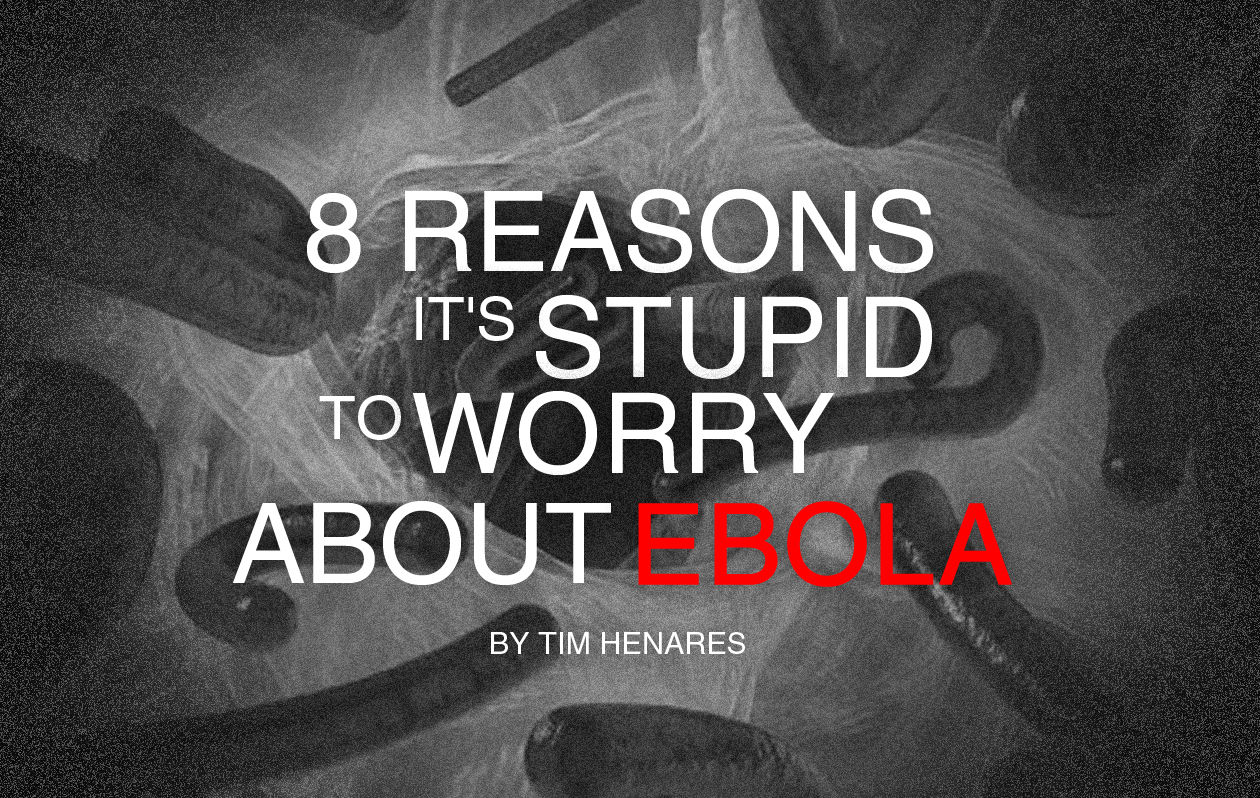 [dropcap letter="E"]bola this, ebola that. There's a new big bad bogeyman for all the worry warts out there, and it's ebola's turn to step up to the plate. In reality, though, people are just blowing things way out of proportion when it comes to panicking about this disease.
We're not saying that ebola with little to worry about, despite its horrible symptoms and high risk of lethality. We're saying that ebola is nothing to worry about, especially in a country that has more important things to worry about, like our current peace and order situation, who's going to be president in 2016, and whether or not Kris Aquino is dating somebody again. Here are 8 reasons why...

Via io9.com
In the 1995 film “Outbreak,” an ebola-like virus called Motaba spread from Zaire all the way to a small town in the United States. It was more a social commentary on whether or not the ends (containing the disease) justifies the means (Draconian measures taken against the infected), and in the interest of spicing things up, made it a plot point that the Motaba virus mutated to become airborne.
Placating Fact: Ebola is not airborne right now, and is mainly transferred via bodily fluids. That is, someone with ebola would have to cough or bleed or vomit or sneeze at you before you should worry about catching it. It's pretty much unlikely to go airborne anytime soon. And by soon, we mean several generations. The only thing “Outbreak” got spot-on about the disease is that it's easier to deal with it when Morgan Freeman's around.

Via economist.com
It isn't like the entire world is clueless about who has ebola at this very moment, and in which countries the disease currently exists. We know that it's already infected at least three people in the United States, yet only one casualty has been reported so far, and only because people decided to ignore the fact that the guy who exhibited ebola-like symptoms came from Liberia, a country that had ebola going around.
Placating Fact: Ebola spreads only from people exhibiting symptoms. Therefore, the current arduous process in airports all over the world quickly contains an overwhelming majority of possible outbreaks well before they even get started.

Via mb.com.ph
Despite numerous attempts by the CBCP to stop the DOH from executing its mandate, it's easy to see that the DOH has always been consistently on top of things whenever infectious diseases have been a cause for worry. From AH1N1 to Bird Flu to Swine Flu, any diseases that needed to be flown into the country via plane have been well-contained.
Placating Fact: Even without a single case of ebola in the country as of this writing, the DOH has already formed a quick-response team to handle ebola. Look at it this way: they're worrying about it for us so that we don't have to worry about it.

Via news.yahoo.com
A 70% lethality rate is nothing to scoff at, but the lethality rate of getting struck by lightning is only up to 30%, yet the odds of an American dying to a lightning strike is significantly higher to their odds of contracting ebola.
Think about that for a moment, and realize that the odds of lightning strikes in the Philippines are even higher, given our weather, yet nobody really worries about that. So why ebola? Because of the symptoms? Well, there is nothing pleasant about the long-term effects of being struck by lightning, either. It's just that it doesn't sell as many newspapers or gets as many clicks as talking about ebola.
Placating Fact: It's pretty interesting that despite having no known cure, ebola isn't automatically fatal. It's even more interesting to note that the survivors of ebola are being studied in hopes of finding a cure or at least treatment so one can weather through the worst of the symptoms and survive it, which, again, is out of our control and something we shouldn't worry about since it's far from our expertise.

[buffer by="10px 15px 10px 15px" id="bar"]4. We Do Not Have the Same Cultural Tendencies That Contributed to the Outbreak In Africa[/buffer]

Via fieldnotes.unicefusa.org
Let's talk about the habits inculcated in Filipinos, especially since the AH1N1 scare and its ilk: we have hand sanitizer dispensers everywhere. We have a healthy respect for the medical profession. And we do not destroy disease centers because we're in denial.
Placating Fact: Not that this makes us Filipinos special in any way, but it really helps that our culture of respect for authority in general has allowed us to weather the worst of these health scares relatively unscathed.193 reported cases and only one confirmed death due to swine flu? Those are excellent numbers, and this is the flu we're talking about. It spreads a lot easier than ebola does.

Africa has a lot of problems to worry about, and Ebola is the least of them. After all, since 1976, ebola has officially killed a grand total of 6,000 people, which probably means more Filipinos have died while singing “My Way” in a karaoke bar. In fact, between ebola and malaria, it should be obvious which disease needs to be dealt with more, especially since malaria has a cure and mere awareness drastically changes your likelihood of surviving it. And you can't tell anyone that people are not aware of ebola right now, so maybe a little malaria awareness is in order.
Placating Fact: The worst killer in the Philippines is heart disease. That's terrible, of course, but here's the thing: it's not infectious. At all.

Via nymag.com
It's been said before: the experts worry about these things so that we don't have to. While we may be distrustful of abusive authorities in this country, our health officials have had a muuuuch better track record than, say, our congressmen or our police force. And given that a person who takes a plane to get into this country is highly unlikely to just check into a hospital that isn't St. Luke's or Medical City, then they're at least not even running the risk of being exposed to our least exemplary medical practitioners, where yes, an outbreak becomes a valid worry.
Placating Fact: An outbreak of ebola in the Philippines becomes a valid worry if and only if we have an infected person get into the plane without being checked properly by the host country, proceeds to infect a bunch of people in the plane, doesn't get quarantined by the Philippines, and decides to seek medical attention in a poorly-run hospital or clinic instead of a halfway decent one. That is a lot of things going wrong all at the same time, and a single intervention at any point would easily put a stop to it.
And again: what would worrying about it do? It's not like our worrying would lead to the discovery of a cure. It's not like our worrying would mean politicians would stop robbing us blind. It's easy to rally and picket against people. Viruses? Not so much.

Via whyfiles.org
We've been paranoid about ebola in the '90s. Then we had Swine Flu, AH1N1, and of course, Bird Flu, which is very scary for men with a sophomoric sense of humor. All told, these diseases have killed a grand total of nine people. Mas marami pang namamatay sa maling akala.
Placating Fact: Everyone has to die at some point. But chances are, you're not going to go because of ebola. So relax, cheer up, and live a little!