8 Reasons Why the Philippines is Still a Global Failure 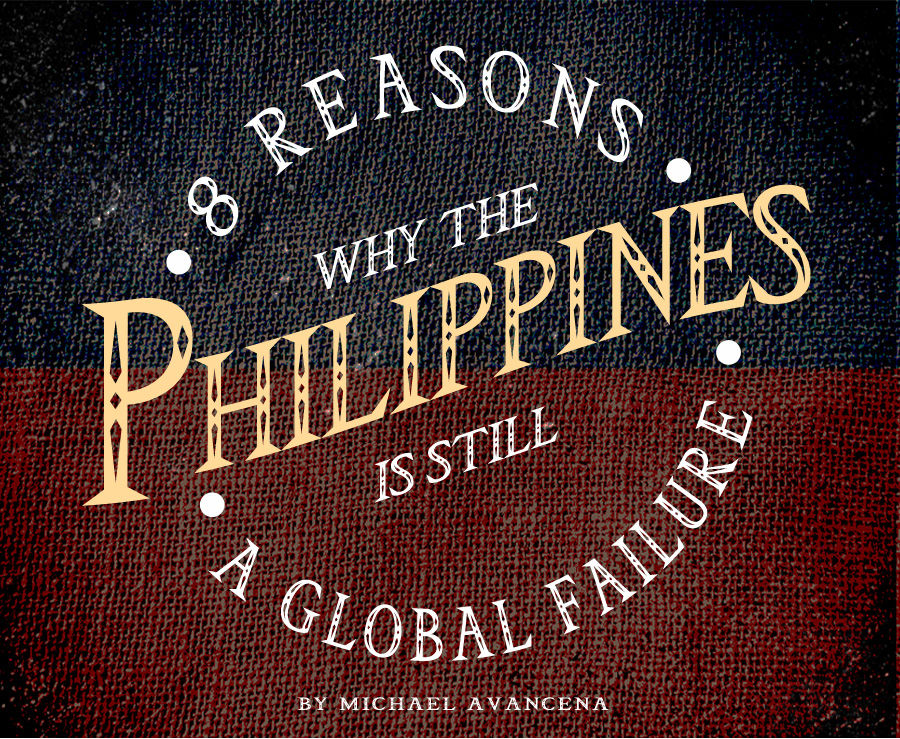 [dropcap letter="T"]he Philippines used to be on the top of the food chain here in our region. We used to have military and economic superiority over our neighbors. At around the 60s to 70s, our socio-economic climate was at par with the world giants. Then we degraded. And degraded. And degraded.
Now, we are here at the helm of the 21st century, with nothing to show for but our perennial traffic, our poverty-stricken communities, and our big-bellied corrupt police officers. Here are 8 qualities Filipinos have that ruin our progress as a nation.

8. We love the underdogs 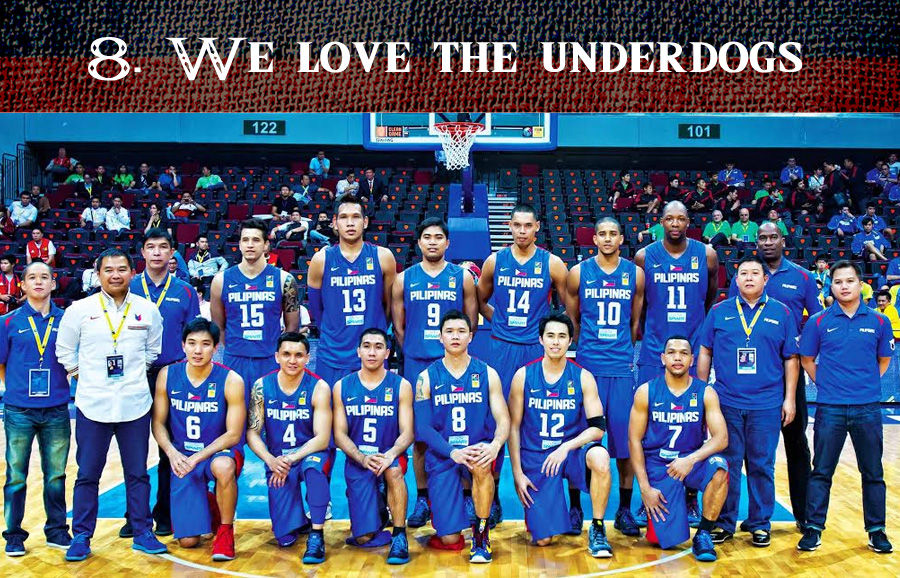 Via roniepatricio.wordpress.com
Oh how we do. We love seeing our beloved actors and favorite basketball teams bludgeoned close to the brink of death by the evil antagonists before rising up from the ashes and winning the fight. We treat them as heroes and we venerate them as our Gods--then we follow their footsteps. Instead of preparing meticulously for each thing that we do, we falsely believe that everything will work out and we will rise from any problem, like our idols.

7. We value Family above others 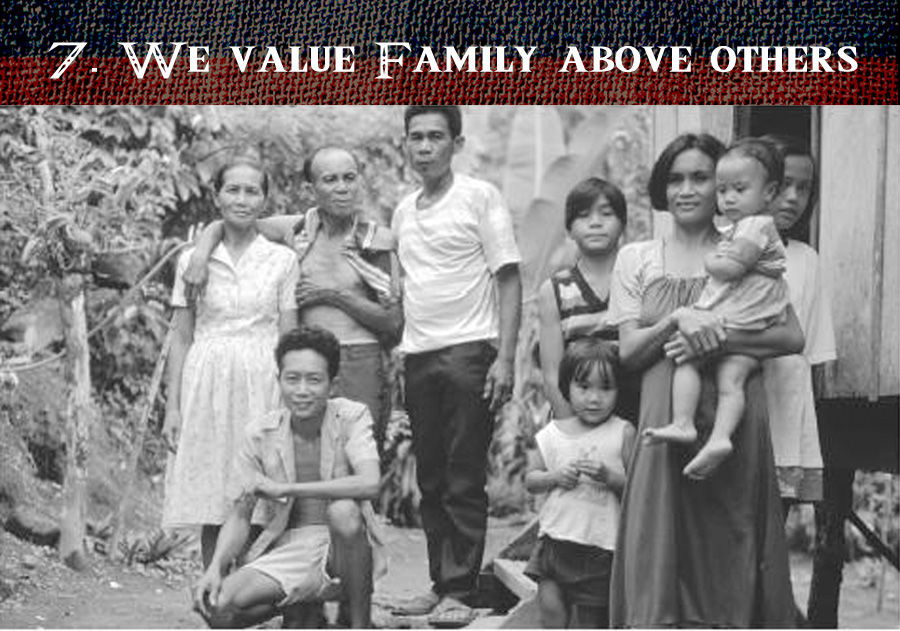 So what's wrong with this? Family is family and such a good son you are, if you follow your father. Doing favors for the family is the quintessential goal of all members. We should do everything for our family. Even though they embezzled millions or billions of government funds coming from the pockets of ordinary citizens.

6. We practice "Bayanihan" more often than we actually should 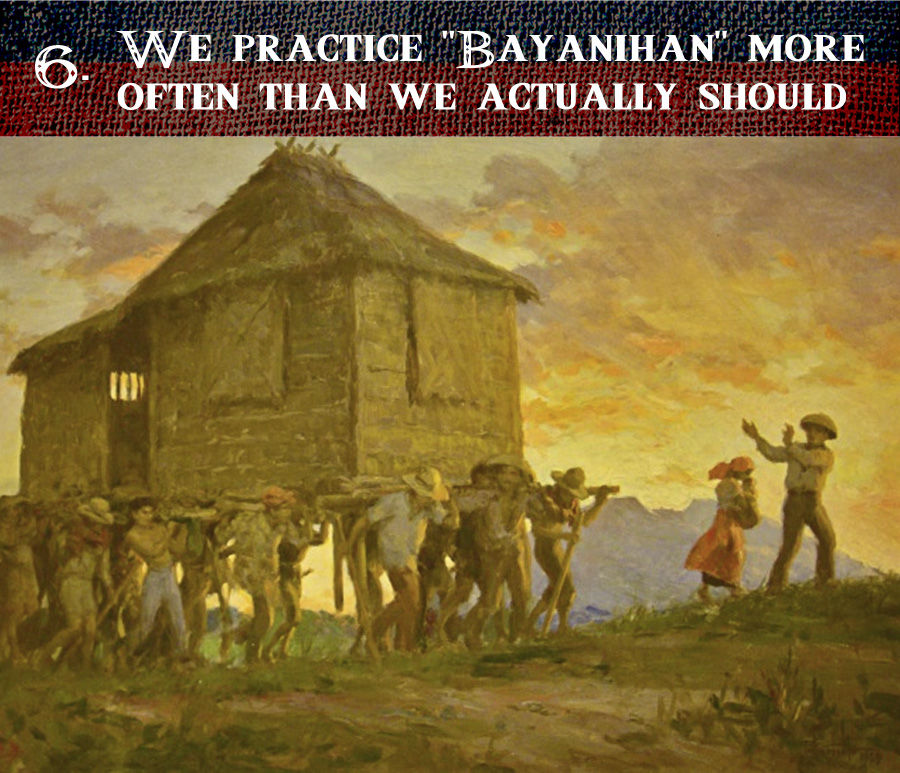 Via xiaochua.net
Bayanihan is a good Filipino trait, but with great power, comes great responsibility. You can't be lending a hand to everyone all the time especially if you know that the person doesn't deserve it. We allow children to beg money from us knowing that these children should be inside classrooms and studying. Rather than prioritizing that, we indulge them.

5. We refuse to live within our means 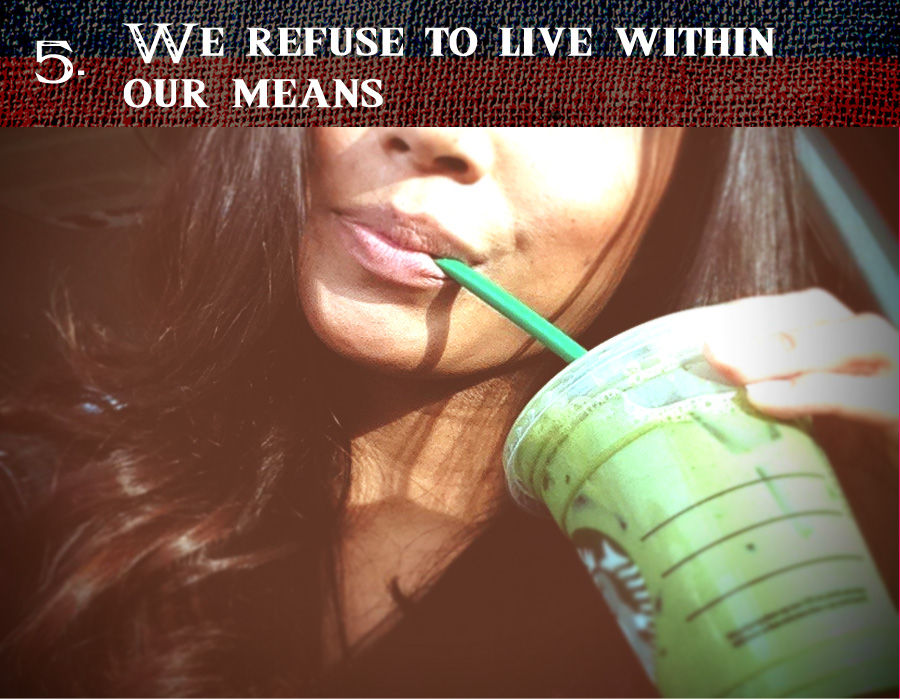 "Oh, Marian just recently had her hair colored. I have to have the same color as her." "Oh look at the Jake's shoes, I've got to buy those!" There's nothing wrong with idolizing and copying--people all around the world do this all the time (it's called Fashion). The problem starts when you sacrifice food and education for things like hair straightening and coloring. For a country with more than half of its population in extreme poverty, fashion and material things should probably take a backseat, right?

4. We forgive and forget 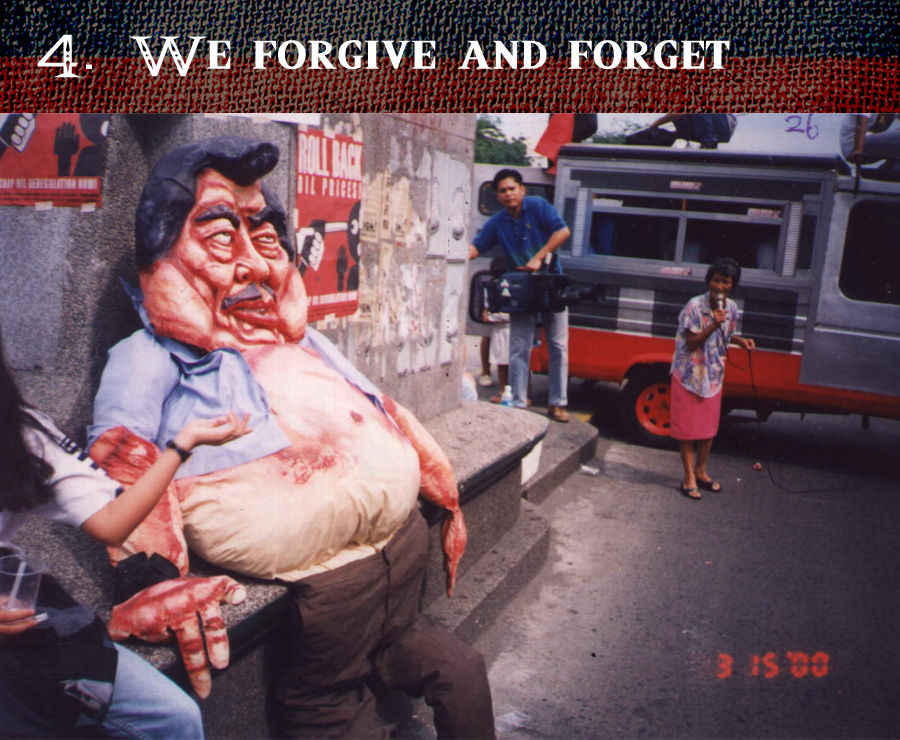 Via geocities.ws
We are a nation composed of amnesiacs. How can we forget a certain public official (and public figure, pre-politics) who was convicted of, in layman's terms, stealing from, not only one, not only two, but a whole freaking nation. He was convicted, arrested,  jailed, and--after serving his time--got pardoned. Then, he ran for the same position again, and came in second. He then ran for mayor and won. To make things worse, he can still win the presidency. 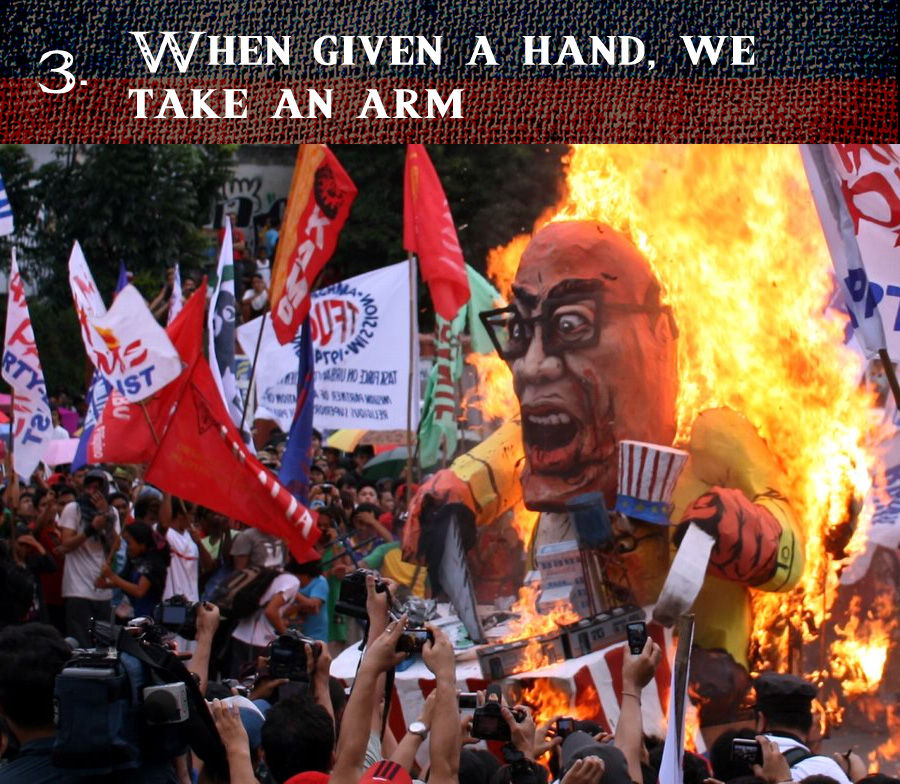 Via rkibongbayan.org
When we are given the opportunity to protest, we wait outside an auditorium and throw eggs or hit a public official. When we are asked to explain why violence was needed, we cite historical examples of why they deserved it. Then, we rally again. This time, to condone violence. Such hypocrisy, and all because we continuously want more than what was given. Although human nature has the tendency to overreach, that doesn't mean that we have to push and push until we forget our principles, just so as we can get what we want.

2. We repeat our mistakes, deliberately. 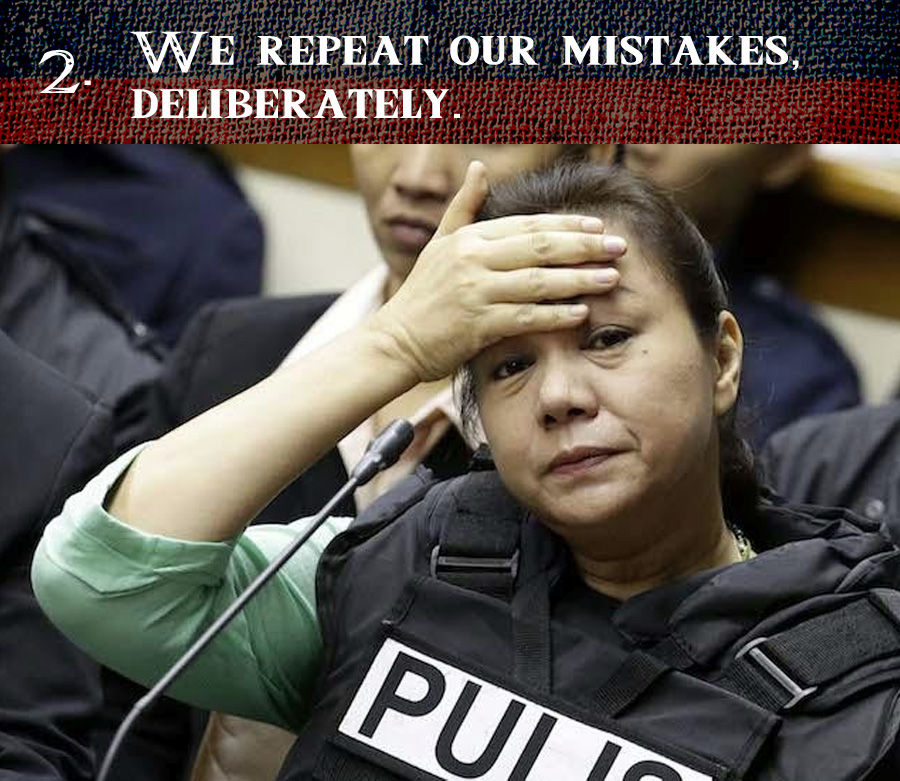 Via remate.ph
One word: corruption. 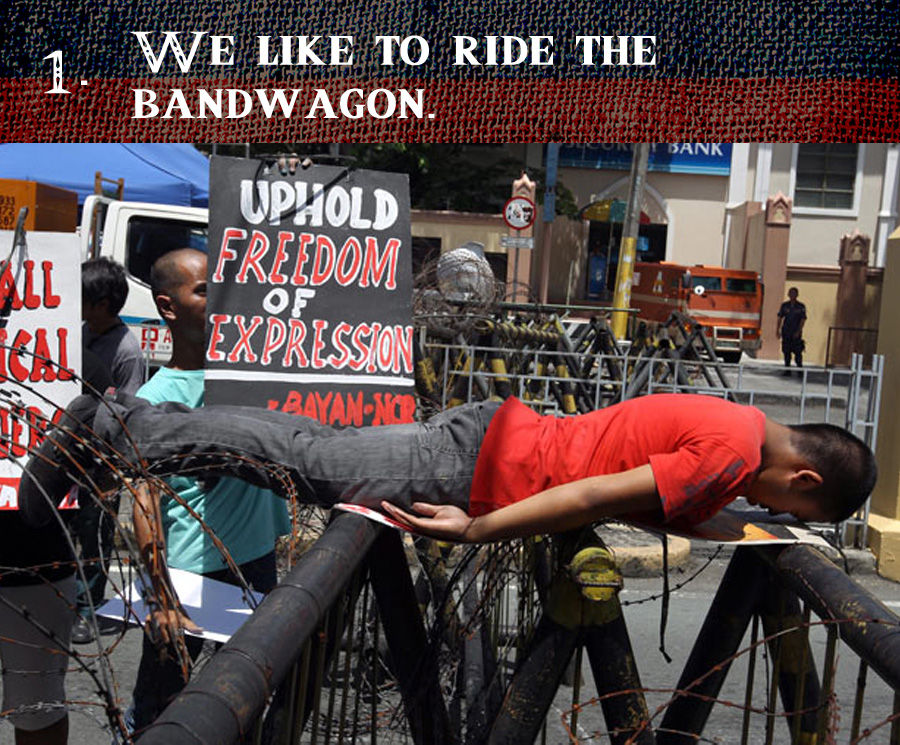 Via telegraph.co.uk
This one could be rooted from maleducation or just plain social apathy. Rather than dissecting the issue, we look at what the majority think and follow it. We, Filipinos, are non-confrontational, so rather than going against the public notion, we tend to stay quiet and avoid the limelight. The sad thing about this is, we have the habit of publicly condoning and lambasting individuals who voice out their opinions against the public notion--probably because we find them weird or just plain idiotic.
What do you think? Share your thoughts in the Comments Section below!