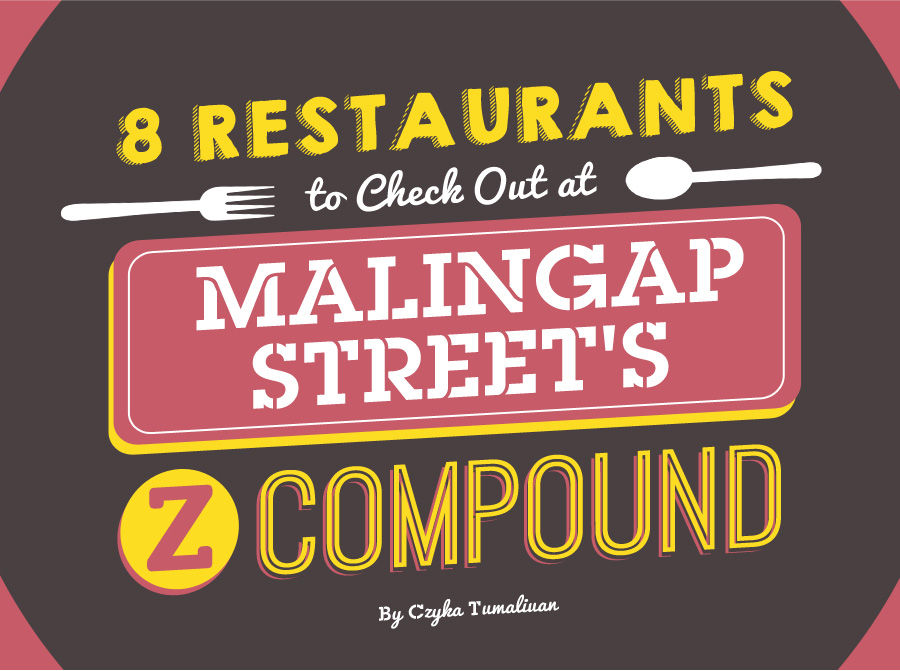 When in Teacher’s village, people who want to quell their hunger for gastro adventures often go to Magingawa street for an exciting bite. Little do they know that the road adjacent to it—Malingap street—is also brimming with unique grub that stimulate and satisfy the stomach. In particular, an 11-month-old eating complex tagged as “Z” hosts a number of startups that offer different interpretations of various cuisines around the world.
Developed by businessman Eric Cadavillo to be an “incubator for the growth of aspiring young entrepreneurs,” the Z compound is an instant hit when it first opened in November 7, 2013, attracting hundreds of customers not only through a unique roster of fare, but also through socio-cultural events, like poetry readings, book launches and street blues.
Although some of the culinary experiments at Z might not work for the discerning palate, most of the meals they offer can be a surprise revelation because the prices are outrageously low, yet the taste and plating are appealing and wildly creative. Go try Z’s best eight:

8 Me Love You Long Time 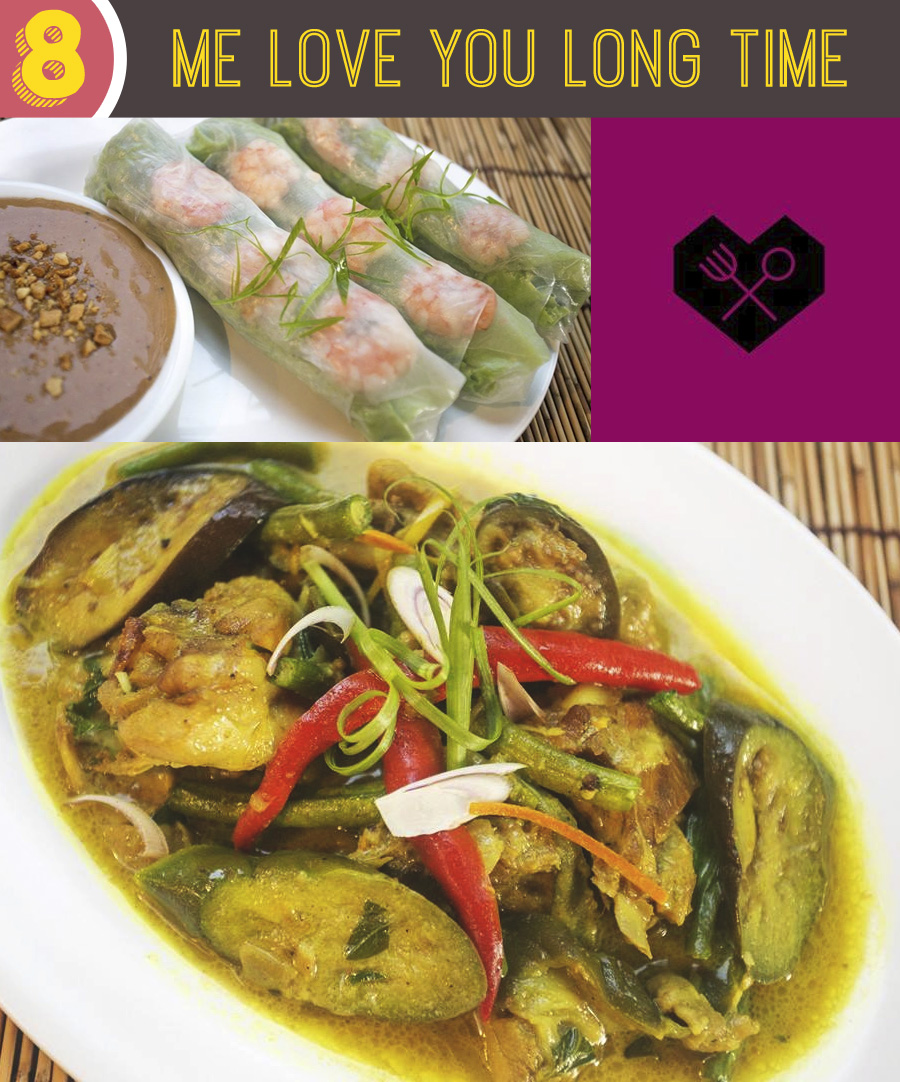 Via Me Love You Long Time's facebook page
Operating Hours: 3pm to 10pm
What to try: Thai curry chicken with rice (P140), Thai milk tea (P49), Pho (P109), Chicken satay (P129 for 6pcs), and Spring rolls (P89)
Yes, the name of the place reminds us of a scene from Stanley Kubrick’s Full Metal Jacket where an Asian hooker approaches two American soldiers and offers her services by repeatedly saying, “me love you long time.” This is because the grub joint was founded by cinema junkies who happen to love the said film. Three of them (Syrel Lopez, James Dela Vega, and Tey Clamor) are graduates of the University of the Philippines (UP) Film Institute, while the other owner (Constantine Reyes) who painted the nook’s interior and brand identity is a product of UP Fine Arts.
No, the phrase doesn’t hold its sexual innuendo at Z, though it does carry an equally irresistible quality that anyone will lust for: cheap Southeast Asian delicacies. For less than two hundred pesos, you can have a taste of Vietnam, Malaysia and Thailand at this beautifully designed food haven. They make their own Sriracha hot sauce and it’s insanely good. Thai embassy secretary Monton Chansiri gave their thai chicken curry and pad thai a two thumbs up, and even took home another order of the curry when he visited last Sunday.
Me Love You Long Time will be featured in Taste Buddies this week.

Via beeconomic.com.ph
Operating Hours: Monday - 5:00 pm to 10pm; Wednesday to Sunday - 5pm to 10:00 pm
What to try: Bagnet with rice (P109), Binagoongang bagnet with rice (P129), Spicy bicol express bagnet with rice (P129), and sisig (P129)
As the name suggests, Bagneto is a kickass villain of the belly that anyone would love to devour and tear apart. This comically named eating spot promises ingenious twists on one of the most popular native specialties of Luzon: bagnet. Interestingly, their take is a deep-brown crispy bagnet that snaps and crackles in the mouth like a homemade meaty chicharrón with less juice from the pork fat. Bagneto has an unquestionable flare for infusing homey Filipino flavors to their plates, as their binagoongang bagnet, sisig and bicol express bagnet keep customers coming back for more. In Good Morning Boss, owner Raz Resuena revealed that they are adding bagnet burger, sinigang, dinuguan and laing to their menu soon.

Via Samu Eats' facebook page
Operating Hours: 5pm to 10pm
What to try: Spicy tuna maki (P150), Ahi Poke (tuna sashimi with special sauce and sesame seeds), Samu Musubi (spam maki, P75 for 4pcs; P120 for 8pcs), Pork katsu curry (P160), and Chocolate mochi!! (P55 for 3 pcs; P85 for 5pcs)
Smartly crafted by designer/model Timi Dominguez Quema together with budding entrepreneurs Vincent Ramos, and Maybelle Cabrera, Samu Eats offers a playful urban Japanese fusion menu. Try their savory maguro makis and their own version of chocolate mochi, which is, by far, the only locally made mochi that melts in the mouth like a molten dark chocolate truffle on the first bite. Samu promises the instant pick-me-up comfort that you get from homemade Japanese chow. Where else can you get a modern Jap fix for less than two hundred pesos?

Via BBQ Zone's facebook page
Operating Hours: 11am to 10pm
What to try: Barbecue with rice (3 pcs for P99), Liempo (P99)
Managed by Z’s mastermind, BBQ zone is the very first restaurant that was put up at Z and the only spot where you can order beer. The place specializes in Filipino grilled goodies that are all great with rice and good old Pale Pilsen. They make their own vinegar and conveniently store them in sanitized Tanduay bottles that you can take with you wherever you want to sit.

Via thetastynecessity.blogspot.com
Operating Hours: 11am to 10pm
What to try: Raspberry Fishbowl (P80- good for 4), Juicy J angus burger (P150), Salbahe (P150), Mas Salbahe (P190) and Sausage Platter (P200)
Like most restaurants at Z, the ultimate selling point of Burger Hub is value for food. For less than two hundred pesos, you can have a mouthwatering bite of a prime charbroiled burger meal that comes with a lavish amount of fries. Targeting college students and yuppies, owners JP Santiago, Jom Entero and Christian Velarde Cibus always make sure that they only use fresh fruits and low-cost, high-quality meats in their kitchen daily. Burger hub is a surefire bang for your buck. It just opened recently, and will soon introduce pizza burgers in their carte.

Via websushidesign.com
Operating Hours: 11am to 10 PM
What to try: Fiesta taco salad (P110), Guyabano wheatgrass with chia seeds!! (P50), and Grilled chicken served with salad and brown rice (P89)
The healthiest snack shack in the Z family, Health Break got its name from Jose Abad Santos Memorial School (JASMS) post-semester rest period, which the institute calls “health break.” Proud graduates of JASMS, founders Melvin Fausto, Benjamin Raymundo, Amerel Atar, and Paolo Mariano find the name nostalgic and apt to capture their earnest mission: “to give people a break from unhealthy diet.” People rave about their ambrosial juices that refresh and cleanse the mind and body, as well as boost metabolism.

Via The Backyard Reservoir's facebook
Operating Hours: 11am to 10pm
What to try: A glass of wine (P75), Bruschetta el pago (with their homemade sausage, P175), Keso bacon pizza (P220), and Mozzarella sticks (P125)
Owned and managed by good friends Mic Lura and Tertius Latonio, The Backyard Reservoir is the only restaurant that offers wine at Z, and the only place at Teacher’s village that serves full-bodied wine for 75 bucks. Pair this glass of lilac buzz with their generous serving of mozzarella sticks or pizza, and you’re all warmed up for a perfect nightcap.
Backyard’s ambiance echoes the overall vibe of Z: homey, relaxed, and unpretentiously artistic. The bare, rustic wooden tables and chairs may look bland but they are seamlessly complemented by the contemporary paintings around the place, which are mostly made by Tertius Latonio’s mom.
“I think the reason why people swarm at Z is because they are not intimidated of the place. No dress codes. No rules. No competition. Just good food and a lot of chilling,” Z owner Eric Cadavillo believed.

Via Meshwe's facebook page
Operating Hours: 3pm - 10pm
What to try: Meshwe platter (P100), Chicken shawarma plate (P150), Falafel plate (P125), and Muhallabia (creamy rose flavored milk pudding sprinkled with pistachios, P40)
Literally defined as “grilled,” Meshwe specializes in authentic Middle Eastern food fare unabashedly created by half-Lebanese Nathaniel Mounayer who doesn’t tweak its menu to suit the Filipino tongue, even for a bit. And it works. The bold flavors that bring out the Lebanese culinary tradition in Meshwe’s bestsellers made it a craze, so much so that the place usually ran out of food a few hours before the actual closing.
How about you, what is your favorite spot Z? Share them at the Comments Section below!