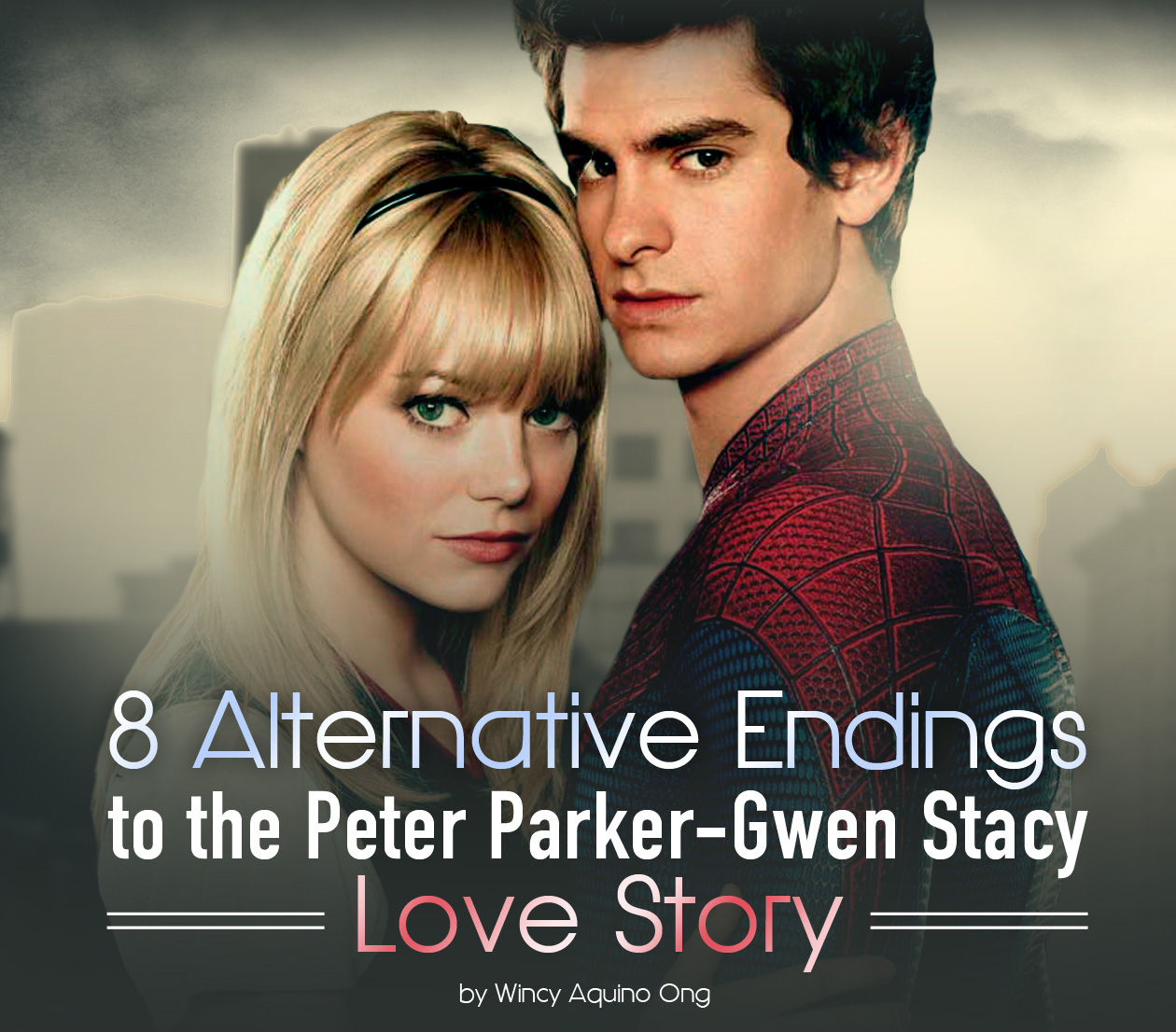 We’re counting down the days (hours and minutes) until The Amazing Spider-Man 2 shows in theaters.
Now, if you’re a true blue Spidey fan, you know that the greatest love team in its entire 52-year history is the Peter and Gwen one. (Sorry, folks, it’s just not Mary Jane, Liz, Betty, Felicia, Michelle or Kitty Pryde. Close, but no cigar.)
Gwen Stacy was the best girlfriend a Spider-Man could have. If one thinks hard about it, she was actually Spider-Man’s sidekick—the Watson to his Holmes, the Robin to his Batman, the Marty Hart to his Rust Cohle. She was never the girl hostage.
If the Internet pundits are right, indeed, goblins will glide, necks will snap, and soliloquies at the George Washington Bridge will be mouthed. But let’s not get ahead of ourselves here.
A comics historian once said that what makes Spider-Man comics special aren’t the villains, the deathmatches, or the urban sci-fi, freak-of-the-week, body horror plots. It’s those tender moments with Peter Parker and friends. Yes, Spider-Man comics is no less than a never-ending teenage soap opera filled with heartrending character moments, folks.
So speaking of which, here’s a menu of soap opera plot options, or alternative endings, to choose from, in case we’re not too thrilled about the sound of poor Gwen’s neck snapping. (Or maybe she’ll live. Hey, it’s Hollywood.) 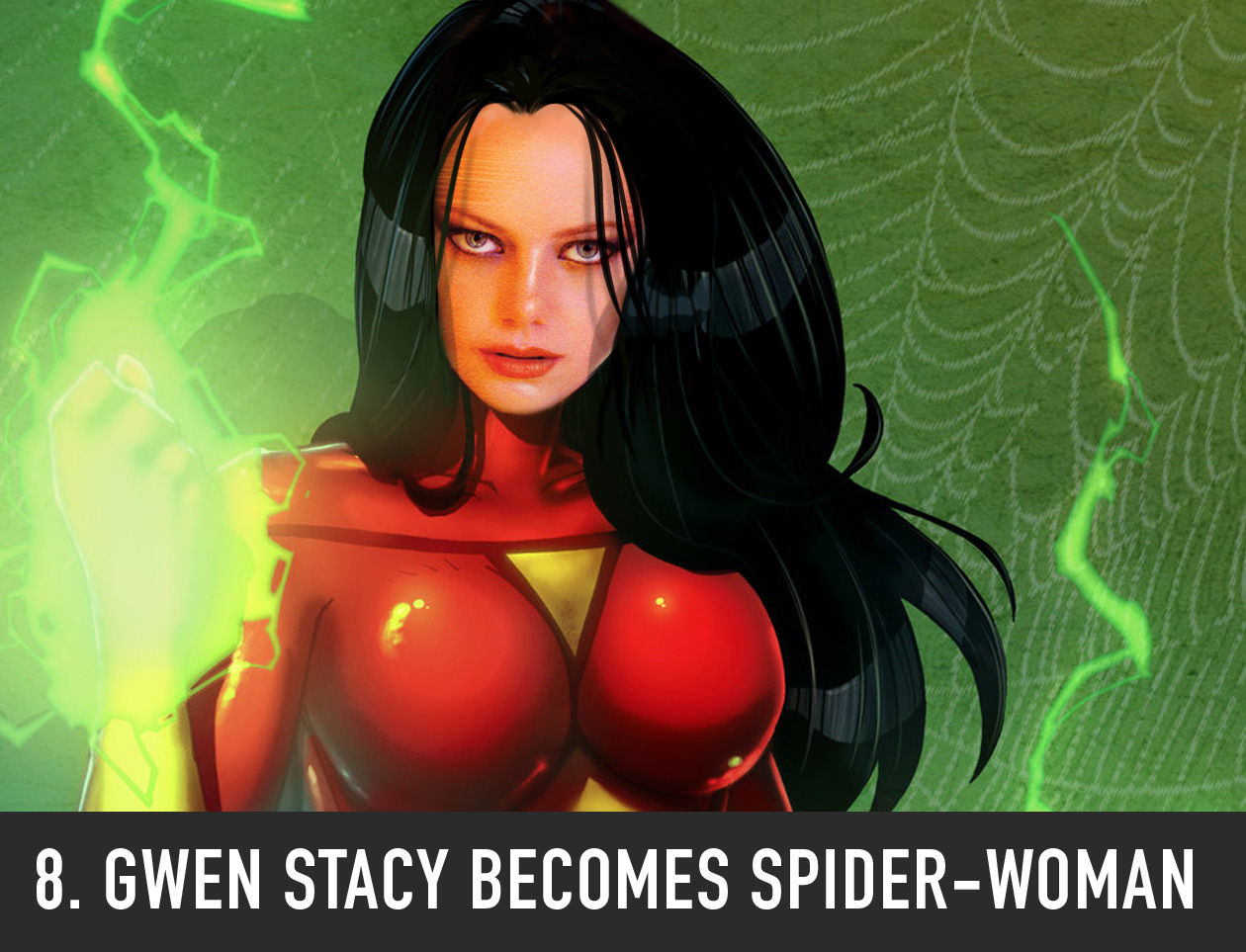 Or the stuff that horribly written comics are made of. You know it’s bad writing when all the supporting characters become heroes or villains themselves. But yes, let’s imagine this happening.
Gwen is on the brink of death. Left with no other option, Peter transfuses his spider-blood to save her. She inherits the same spider-powers and joins his boyfriend in the crusade fueled by great responsibility. Err…Let me rub my chin on that one. 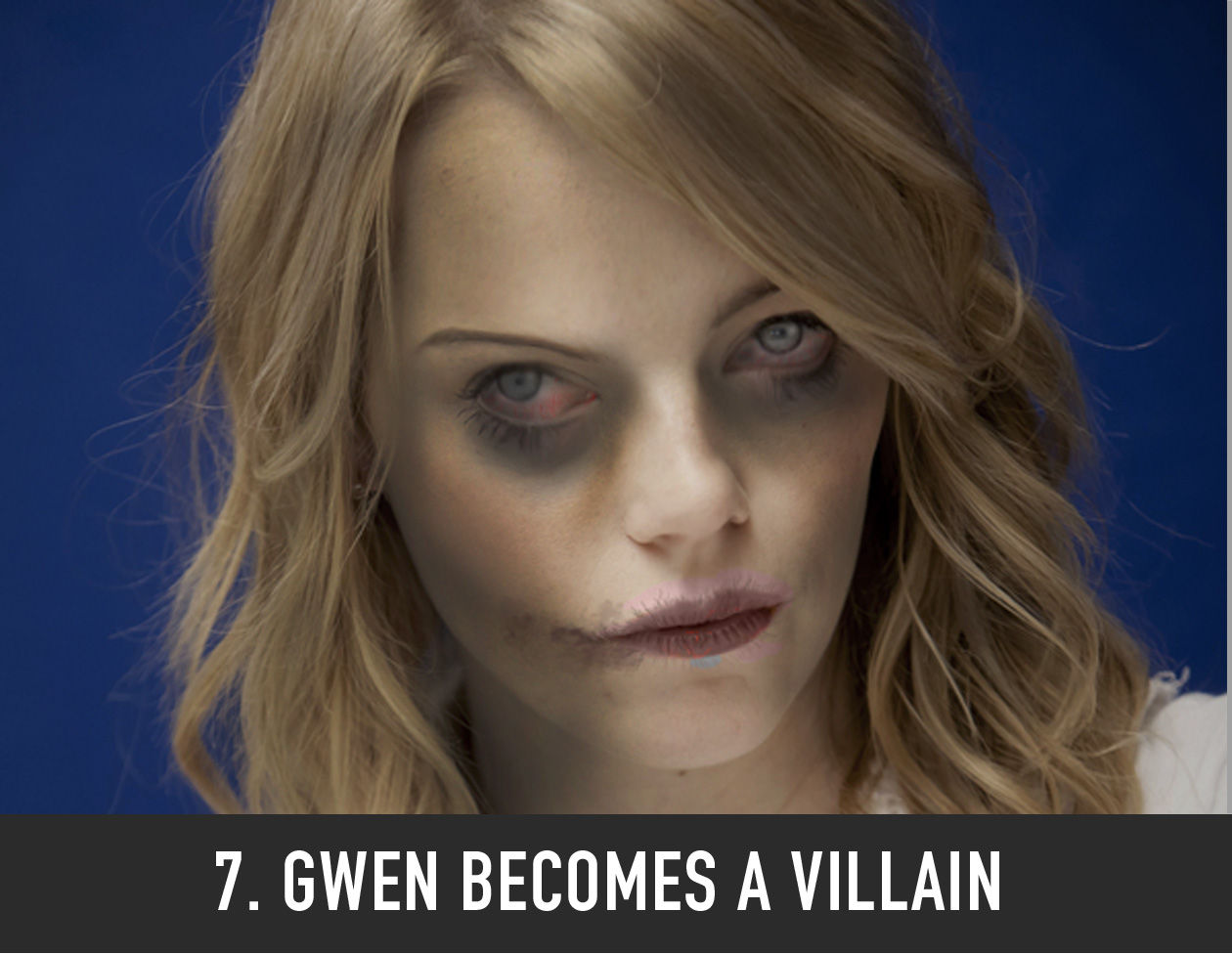 Oy, and you ask why comic books were burned in a funeral pyre during the 1950s. This is the finest example of B-movie writing. It’s like you gave a five-year-old editorial duties at the Marvel Bullpen. But for the sake of pandering, let’s give it a shot.

The corpse of Gwen Stacy gets re-animated through new-fangled genepunk technology from Oscorp. Only the technology has not been perfected yet, so all of those revived exhibit a hint of mental instability. Picture deranged Gwen Stacy in zombie clothes telling Peter, “You didn’t save me from that bridge! You failed to stop my death! I will kill you!”

Yeah, and you lost me with all those exclamation points, Sir. Next… 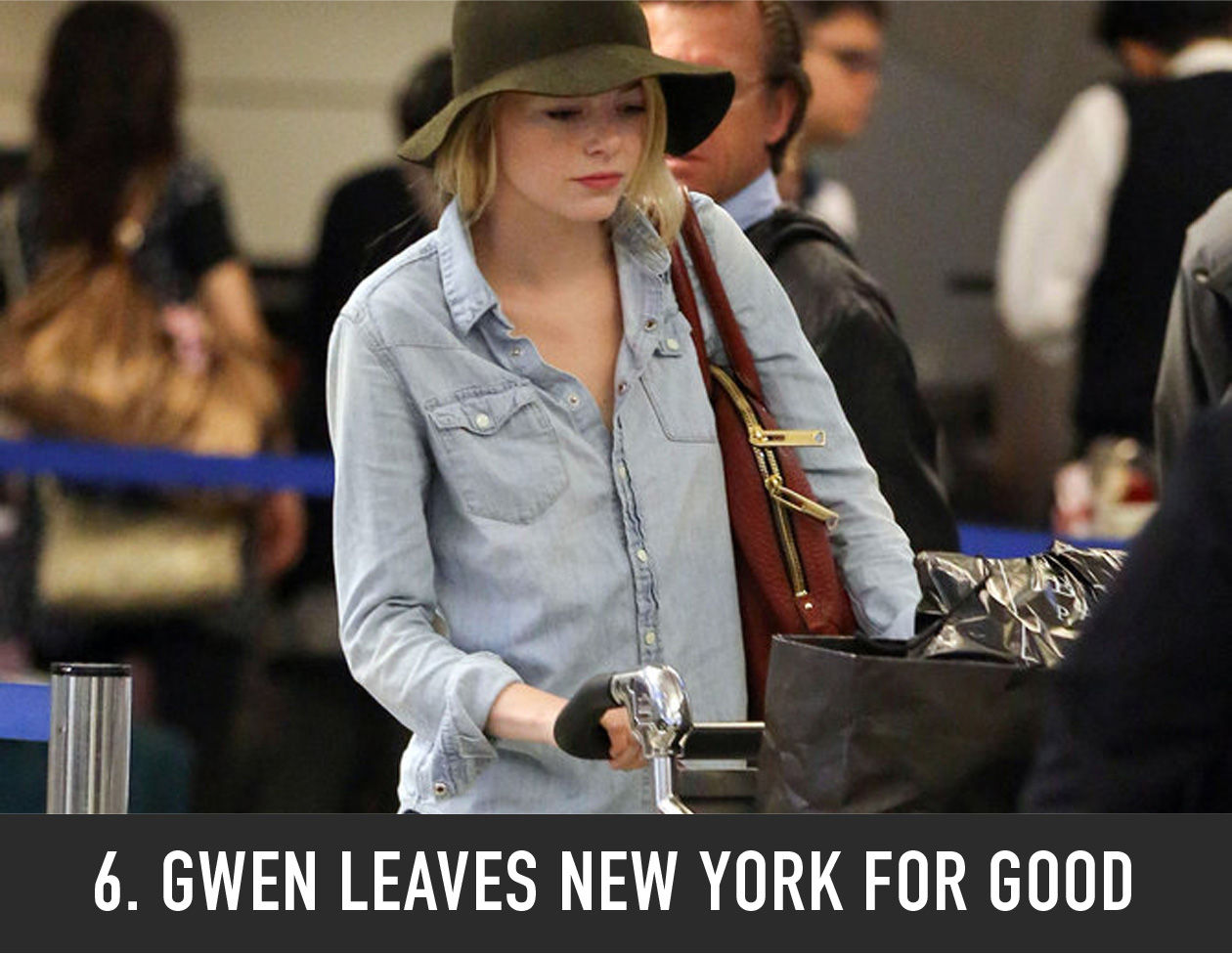 Via popsugar.com
All the stress of being Spider-Man’s girlfriend has just driven Gwen Stacy close to cuckooland. So she packs up her headbands, skirts and knee-high boots and drives off to a more peaceful neighborhood, a small town in Portland, Oregon.
We then follow her non-superhero adventures as a hipster working at a microbrewery. (Hey, Emma Stone plays her, after all.)

5. GWEN IS ACTUALLY A MUTANT 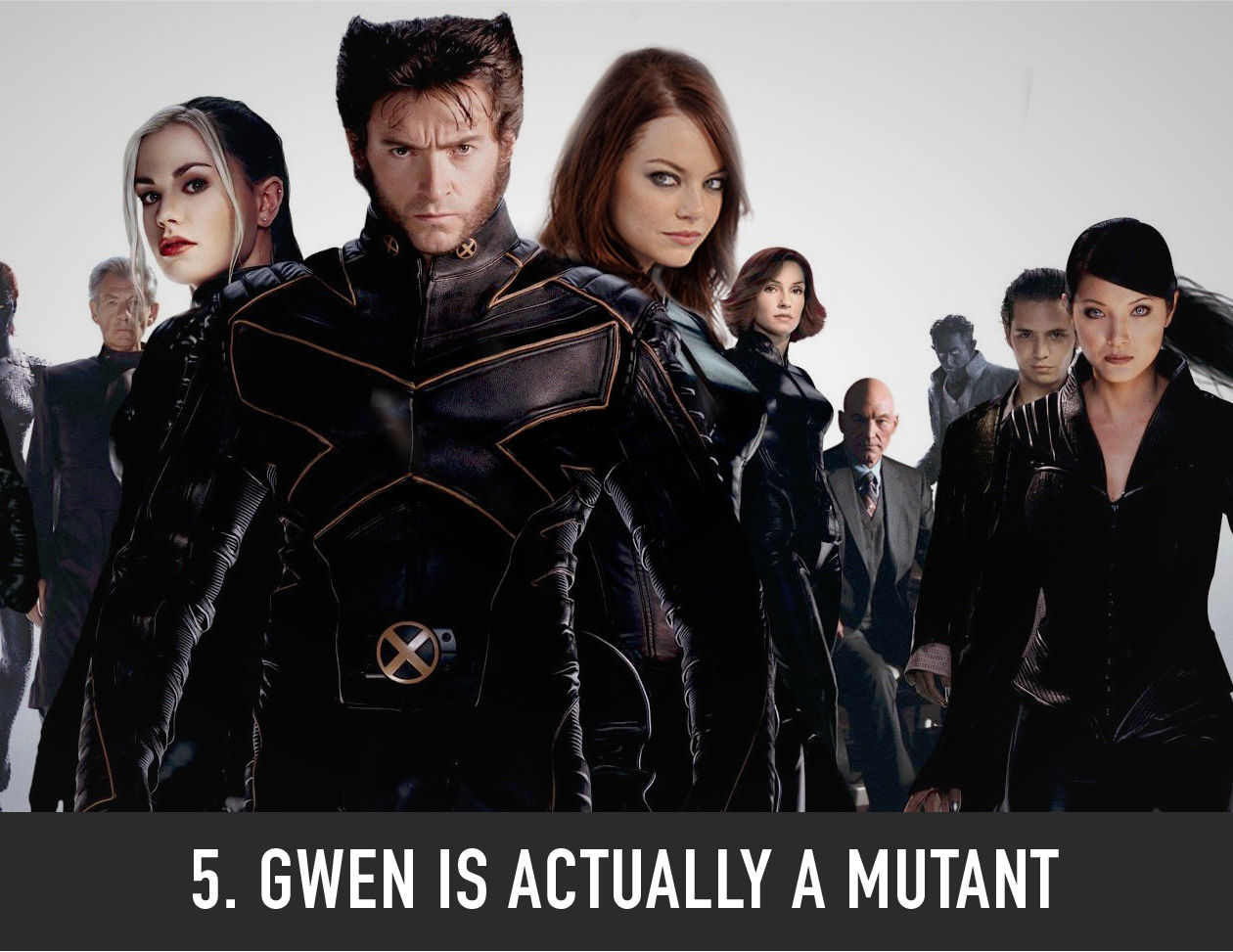 Talk about silly crossovers, Logan.
The Green Goblin has released her. Mere seconds before she falls to the briny depths of the Hudson River, poor Gwen Stacy closes her eyes and plays one last re-run of her dear life. But wait! Tiny pterodactyl wings suddenly grow from the ankles of her feet. She’s a mutant. And her powers have finally manifested!
She then takes a bus to the Jean Grey School of Higher Learning. Huh? What radioactive plant are we smoking here?

Via homorazzi.com
To borrow some themes from the Star Wars universe, let’s try this one for size.
Little is known about Peter Parker’s parents. The only thing we know is that they moonlight for the U.S. government. In a twist of M.Night Shyamalan proportions, we learn that Gwen is actually Peter’s long-lost sister.
Oh, the tragedy. We all fall for the one we cannot have. And this time, it’s genealogy that got in the way.

3. GWEN TURNS LESBIAN AND HAS AN ILLICIT AFFAIR WITH MARY JANE. 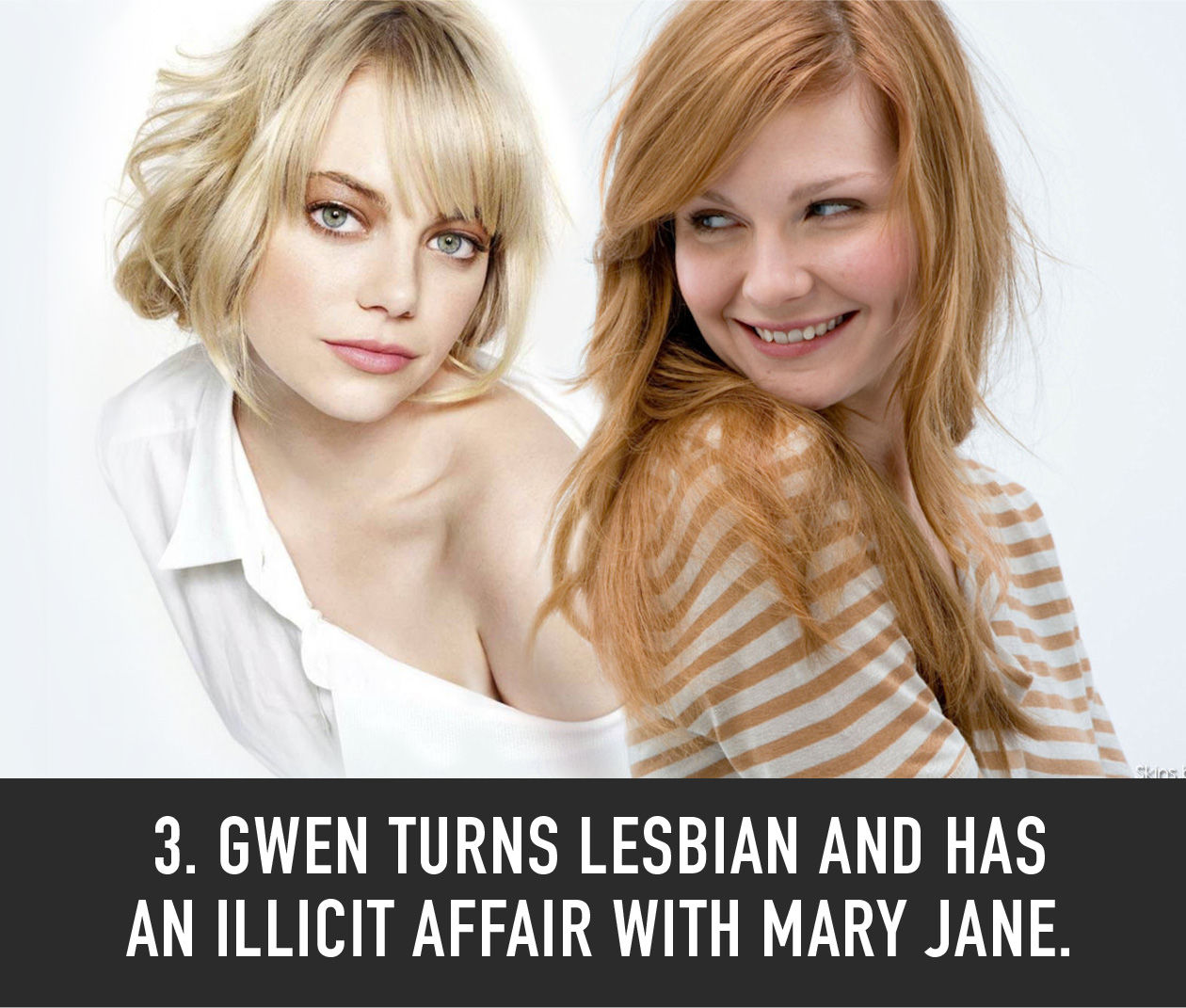 What the Spider-Man universe needs is a sprinkle of mature content. Let’s give it a little of that HBO, Showtime and FX flavor.
Gwen survives the fall. She breaks up with Peter but discovers a new side to her sexuality. She then develops inklings for a certain red-head from Forest Hills: Mary Jane Watson.
Suddenly, everything became a hell of a lot more interesting. 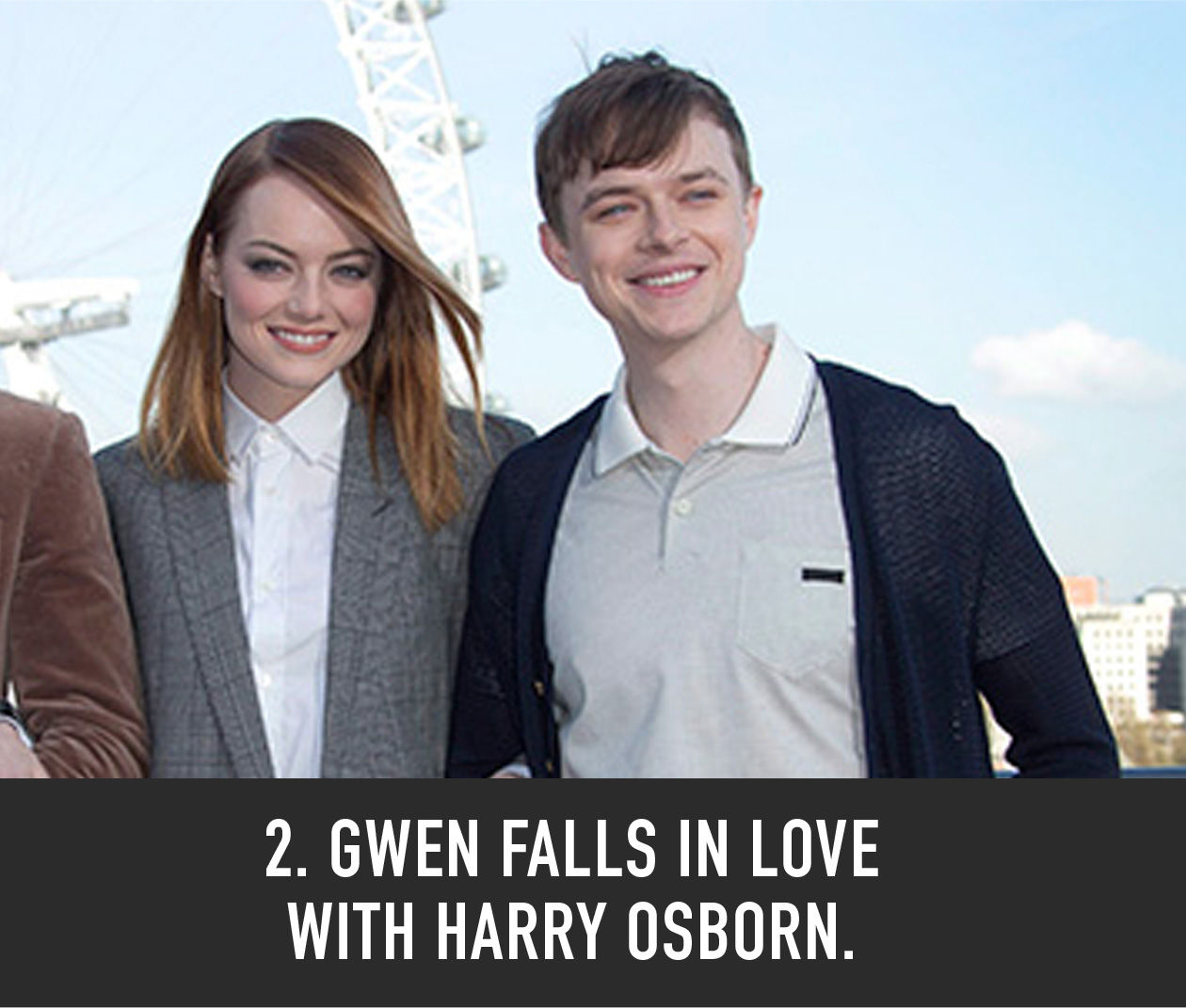 Via ottawacitizen.com
In the soap opera, Dawson’s Creek world of Spider-Man, where everyone has dated everyone else’s girlfriend, like it’s a round-robin of couples, this is inevitable. The irony is not lost, when Gwen has fallen in love with her would-be killer.

1. PETER AND GWEN GET MARRIED 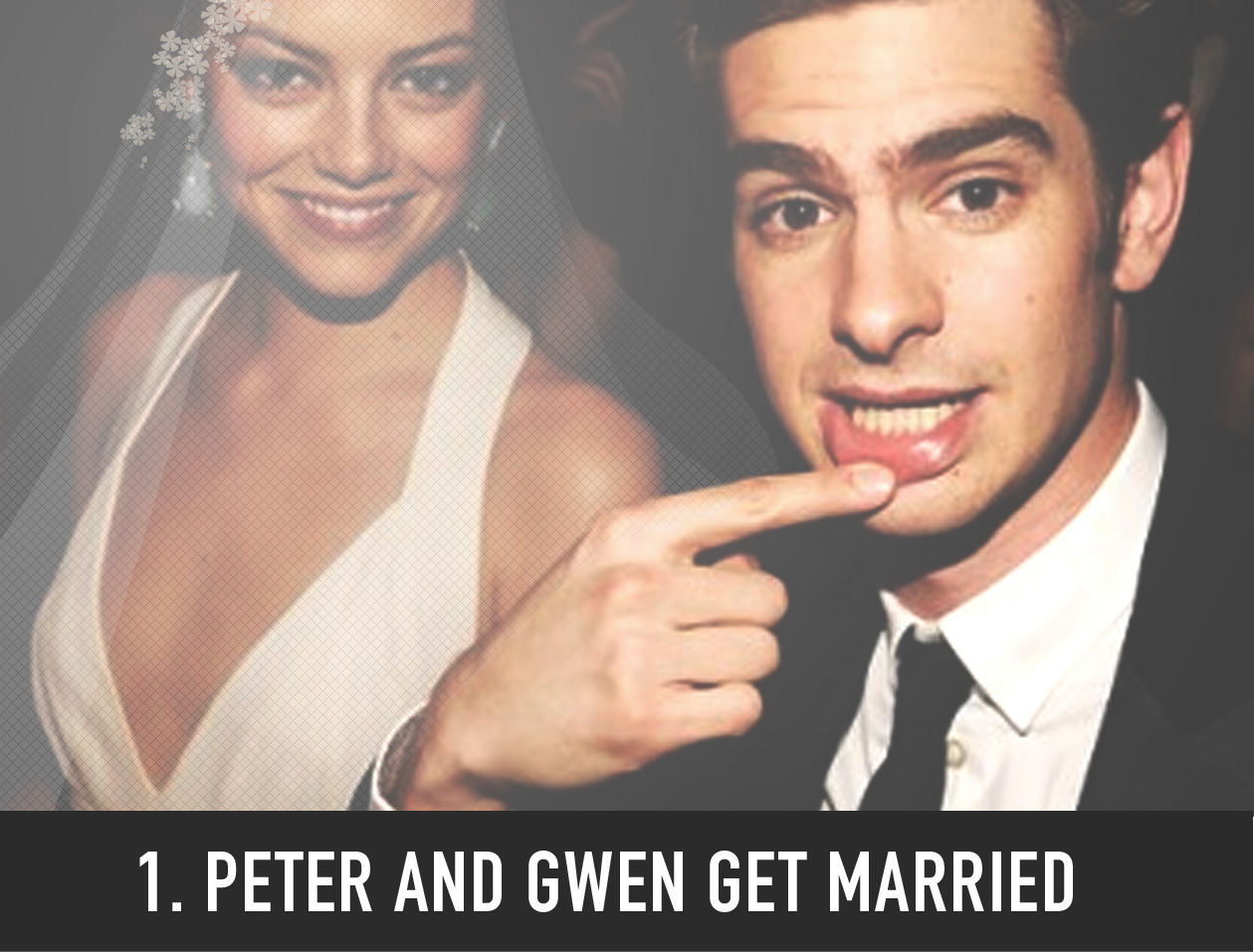 Hmm…This is actually more interesting than Peter’s marriage to Mary Jane Watson. And it actually makes more sense: Nerds marry nerds. They do not end up with actresses.
Besides, everything became boring when Peter married Mary Jane. Once the loser won the hand of the heartthrob, all tension was lost. Nerdy, bookworm Peter was no more. He became Billy Joel.
Now, think of the dramatic possibilities if Peter and Gwen tied the knot. They’re endless. Plus, it’ll be more fun.
What's your alternative ending? Post your fan fiction in the Comments Section.