[dropcap letter="T"]o mark Suicide Prevention Week, support groups and non-profit organizations from all over the world are educating the public about the realities of suicide, while reaching out to help people struggling with mental health conditions such as clinical depression and bipolar disorder.

To educate and enlighten my fellow Filipinos, I’d like to present to you the 8 biggest fallacies about suicide. May this stop the stigma and allow us to help a loved one who may be suffering in silence with the highly misunderstood disease called depression.

REALITY: Suicide can strike any gender, race, age, financial status, and type of personality. Even the most intelligent, spiritual, and strong-willed people can get suicidal. “Instead of ostracizing them, what they actually need is compassion and empathy,” said psychiatrist Dr. Rene Samaniego of Makati Medical Center. “They are in pain and often times reach out for help because they do not know what to do and have lost hope,” explained Kevin Caruso, founder of suicide.org, which promotes suicide prevention, awareness, and support. “Always take talk about suicide seriously. Always.” 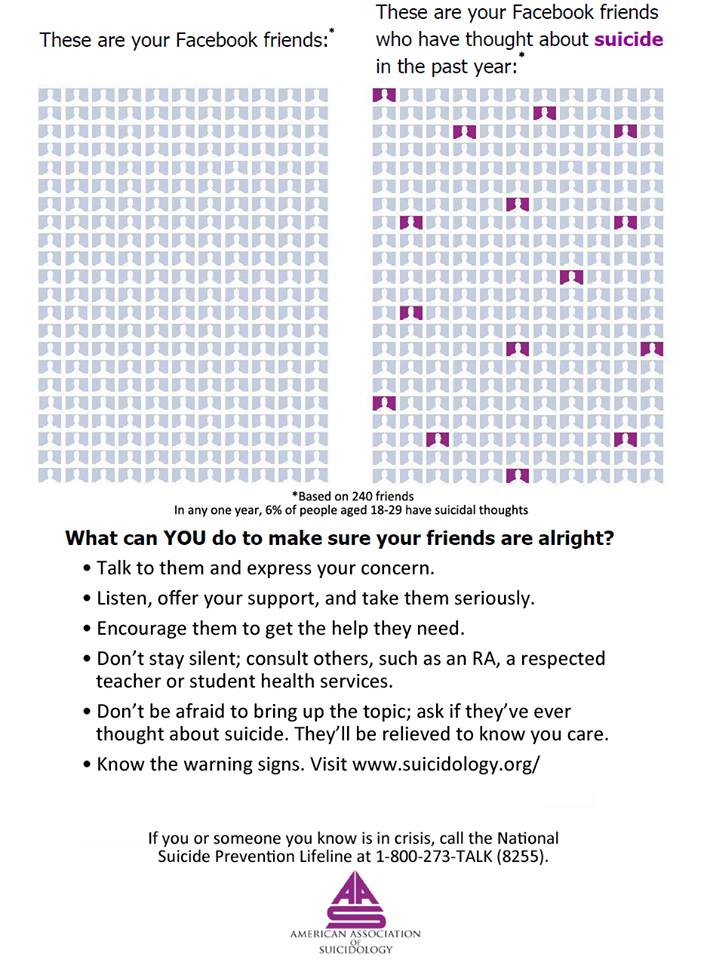 FALLACY: You shouldn’t talk about suicide with anyone, especially the suicidal ones, because it could give them the idea.

REALITY: “It is important to talk about suicide with people who are suicidal because you will learn more about their mindset and intentions, and allow them to diffuse some of the tension that is causing their suicidal feelings,” said Caruso.

FALLACY: Suicidal people just have to pray and shake it off. A deeply religious person will never attempt or even think about suicide. A religious family will never have a suicidal member.

REALITY Purpose Driven Life author Rick Warren’s son Matthew completed suicide in April after battling mental illness since childhood. “For 27 years, I prayed every day of my life for God to heal my son’s mental illness. It was the No. 1 prayer of my life,” the pastor said to his congregation in July. “It just didn’t make sense why this prayer was not being answered.” He now stresses the importance of having psychiatric help and strong community support to go with faith. His new mission is to remove the stigma associated with mental illness in the Church.

FALLACY: Sadness affects everyone, so these suicidal people should stop being so melodramatic about their problems.

REALITY: Movies, telenoveleas, books and news reports have sensationalized and romanticized suicide for centuries. While sadness is a normal feeling you experience when something goes wrong, like breaking up with your girlfriend or losing a game, suicidality is often caused by clinical depression, a deeper ailment. “All mental disorders are caused by a complex interaction and combination of biological, psychological and social factors,” Dr. John Grohol wrote in psychcentral.com. A clinically depressed person is confused and can’t realistically explain his or her own depression.

FALLACY: Psychiatry is a first-world luxury where people pay someone to listen to their problems.

REALITY: Like cancer, heart disease and AIDS, “mental illness is an equal-opportunity illness. One in five adults are dealing with this illness, and many are not getting help because the stigma prevents that,” said Margaret Larson, NBC journalist. “Psychiatry is an established field of medicine just like surgery and pediatrics,” added Dr. Samaniego. “It involves a whole slew of approaches and goes way beyond just ‘talking.’” In 2004, the World Health Organization tallied 4.5 million people suffering from depression in the Philippines alone.

REALITY: We use the term “crazy” loosely to refer to someone needing or undergoing psychiatric help, which is why many are forced to hide and be ashamed of their condition. In reality, unless they exhibit signs of actual psychosis, psychiatric patients are far from crazy. “Extreme distress and emotional pain are always signs of mental illness but are not signs of psychosis,” according to save.org (Suicide Awareness Voices of Education). They have a chemical imbalance that makes them act irrationally.

FALLACY: Suicide is often done on a whim without any warning signs.

REALITY: A study conducted by the US National Institute of Mental Health shows that majority of people who die by suicide had been showing signs weeks or months before the act. According to save.org, common warning signs of a suicidal person include: talking about wanting to die or to kill oneself, feeling hopeless or having no reason to live, talking about feeling trapped or having unbearable pain, insomnia or hypersomnia, extreme mood swings, isolation from friends and family, withdrawal from usual activities, and reckless behavior.

FALLACY: Once a person decides to die by suicide, we should just let them because there’s nothing you can do to stop them.

REALITY: “The vast majority of people who are suicidal do not want to die. They are in pain, and they want to stop the pain,” Caruso said. “The experience of convulsive pain, along with the conviction that it will never end except in death—that is the definition of a severe depression,” explained Harvard literary critic George Scialabba. When properly approached and addressed, suicide can be prevented and even the most severe cases of depression can be treated. “The earlier the treatment can begin, the more effective it is,” according to the Natasha Goulbourn Foundation.

Writer Kate Alvarez is a member of the Natasha Goulbourn Foundation, a non-profit org that spreads awareness about suicide prevention and mental health in the Philippines. On National Suicide Prevention Day (September 10), she appeared on TV Patrol and Isang Bandila to talk about suicide with journalist Ces Drilon. Kate’s story will also be published in Cosmopolitan’s upcoming October issue.

A former full-time magazine and newspaper editor, Kate now juggles a career in writing, modeling and acting. She is also an advocate of animal rights and mental health awareness. Check out her blogs, Kate Was Here and Retro Prints, as well as her beauty articles in BDJ Box.