The demon is here. Probably the most well-paced horror movie I’ve seen in the last two years, this tale of a haunting on a family in Rhode Island is pure scare tactics cooked to perfection.

Told from the point of view of real-life ghostbusters Ed (Patrick Wilson) and Lorraine Warren (Vera Farmiga), this movie has the whole “based on a true story” tag going for it as the couple comes to the rescue of supernaturally beleaguered Perron family.

They're experiencing increasingly disturbing events at their newly-bought home in Harrisville. It all started in 1971 when Roger and Carolyn Perron (Ron Livingston and Lili Taylor) finally move into a dilapidated old farmhouse with their five daughters.

On the first day, they’re in high spirits and their attempts at settling in go smoothly. The next day, their dog, Sadie, is found dead outside and one of the daughters finds a boarded up entrance to a cellar.

After that, the infernal shit hits the fan and intensifies into a demonic typhoon.

Grab some popcorn and make sure you take a piss before you sit down if you’re seeing this in the theaters. If you're watching it at home, though, I highly recommend that you turn off the lights. Oh, and beware of the claps.

You’ve probably seen the trailer where Carolyn Perron (Lili Taylor) and her daughters play their family’s game of blindfolded hide-and-seek with occasional claps like a Marco Polo routine indicating to the seeker where you’re generally at. When hands come out of a previously closed closet and clap twice, the heebie jeebies come like drone strikes. For anyone who’s ever played this fun barkada game, after seeing this, you’ll never play it again. Ever.

Ain’t afraid of no demon? While the shocks and scares of this movie are the products of top shelf narrative misdirection, the fact that the two leads are real-life veteran demon hunters and paranormal investigators (or quacks and fakes to skeptics) is a great way to keep the audience guessing: did that really happen and did it happen that way?

It was the Warrens who founded the New England Society for Psychic Research and they’ve amassed a great number of creepy tales, to say the least. While The Conjuring is a great horror oeuvre, it’s not even the Warrens’ most popular case. Nope, that one falls to what’s become known as the controversial Amityville Horror. Yes, the same reported haunting that was the basis for the 1977 book, as well as the 1979 and 2005 movies.

After long years contemplating whether she should do it, Andrea Perron (the youngest daughter in the movie) eventually penned a three-part memoir of her family’s experiences at the Rhode Island house, House of Darkness House of Light: The True Story.

While this movie is not based on her book, the events she describes and the horror of what happened there, told as facts, is testament to a haunted family's dire need of spiritual rescue. In her own words: “The day we moved in, the previous owner told my father: 'Leave the lights on at night.' A rather cryptic message. Thus began an incredible odyssey; a supernatural excursion of how... for almost a decade, our family lived among the dead.” 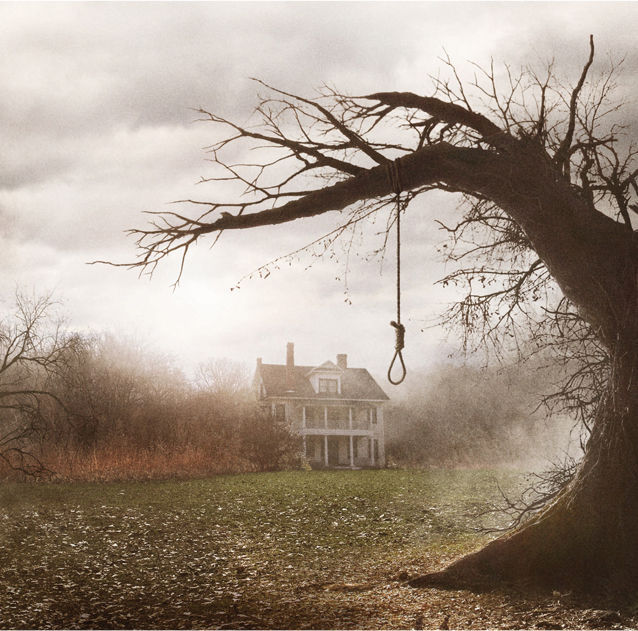 “Don’t touch anything!” urges Ed Warren in the movie, when a reporter tries to lay a finger on a toy monkey. Like a macabre collection of case trophies, the Warrens maintain a room in their house that is much like the Containment Vault of the animated Ghostbusters. Every single one of the objects inside has a gruesome story behind it and was taken from a place where a haunting occurred, people have died or been murdered, and demonic possession has taken place.

“Why not just burn it all?” asks the reporter. Because they’re just vessels and burning it would just set the spirit within free. “Because it’s often better to keep the genie in the bottle,” Ed replies, and you know it’s good advice. Yes, the museum is real and can be visited. 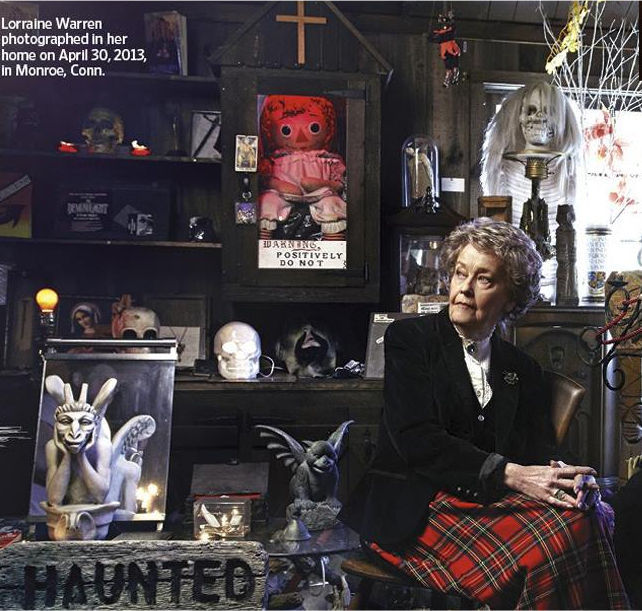 Which brings us to this adorable little thing. Kinda cute, huh? Do not be fooled. This doll houses a demon of the most malevolent kind calling itself Annabelle, and is one of the most popular cases of the Warrens.

It started out as a gift. In 1970, a nursing student named Donna got a Raggedy Ann Doll from her mother as a birthday present. Donna and her fellow nurse and roommate Angie began to notice that the doll would move around their apartment on its own; sometimes subtly, with relatively unnoticeable movements, like a change in position. 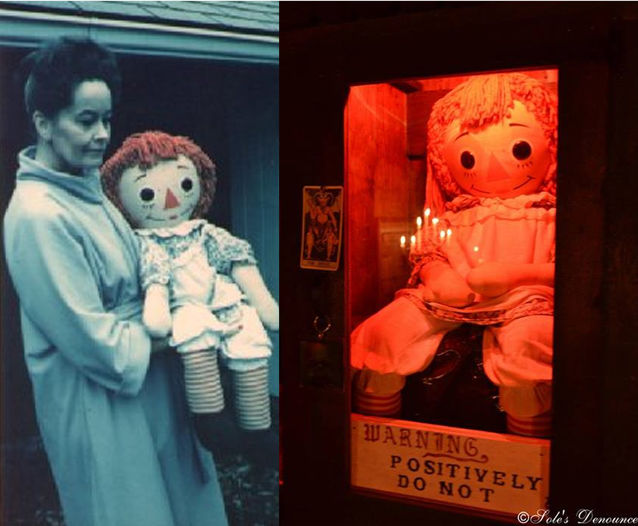 Eventually, Donna and Angie would come home to find the doll in a completely different room, crossed-legged on the couch, or upright, standing on its feet. Eventually, the doll started writing messages and was blamed for trying to choke a male visitor.

Ed and Lorraine were later called to investigate and an exorcism of the apartment was performed successfully. The Warrens took the Annabelle doll into their possession. It's still housed in the museum today. Sometimes it moves—which is why it’s kept behind a glass case and has a double warning not to be opened and touched.

Things come in threes. To piss off the trinity, shit goes down at 3AM (in the movie, all the clocks stop at 3:07AM), and there are three stages of escalating infernal assault: Infestation, Oppression, and Possession. These things are good to know as part of a 101 lesson in defense against the infernal arts. If running away from the house like Forrest Gump fails, call a priest. Pray it works. 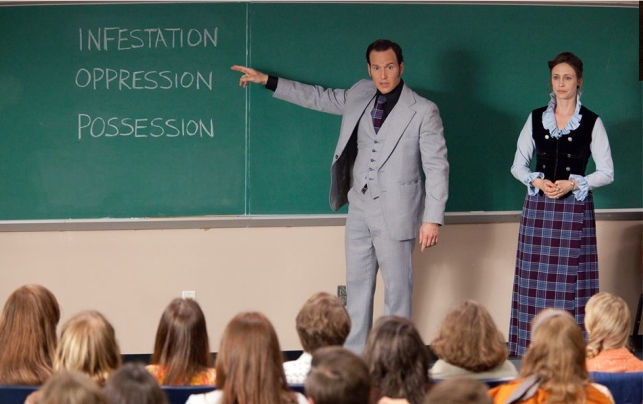 Talk about a woman with balls. As the team’s resident clairvoyant, Lorraine (played by the beautiful Vera Farmiga) usually walks point during case inquiries. Thus, during the investigation of Harrisville she bravely ventures into hidden cubbies, scary corners, and places that raise the hackles of everyone else without batting an eyelash. Don’t talk about nerves of steel until you’ve looked demons in the eye, man!

The real Lorraine Warren is now in her twilight years but still continues to help with supernatural cases. As you can see here, she takes the film team for a tour of their museum for one of the movie’s promo vids. 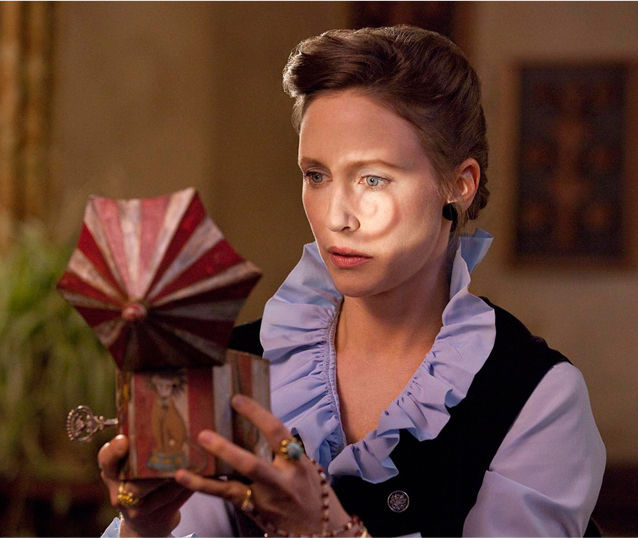 The film's finale achieves true rousing terror so I won’t ruin it for you. But even the way they pull it off, mostly too bathetic and reeking of Hollywood feel-good pablum, was plausible and done with heart. Whoa, that demon gives The Exorcist’s Regan a run for her money. 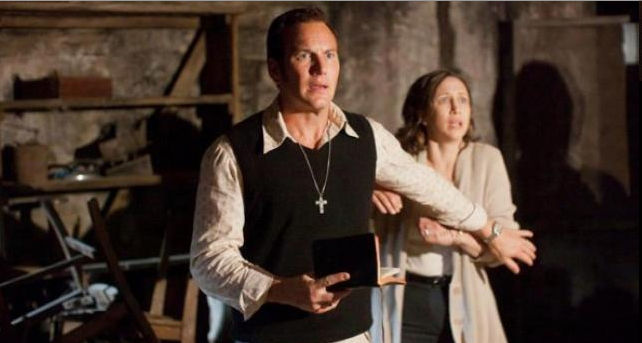