8 Things You Need to Know About Typhoon Hagupit/Ruby 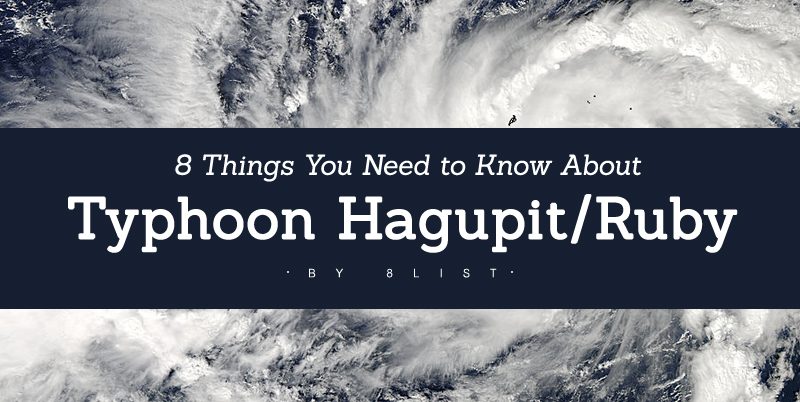 Via nasa.gov
[dropcap letter="T"]ropical cyclone Ruby (international name: Hagupit) has entered the Philippine Area of Responsibility (PAR) at around 3am today, December 4, 2014.
According to Philippine Atmospheric, Geophysical and Astronomical Services Administration (PAGASA), the typhoon is projected to make landfall over the Eastern Visayas area. The National Disaster Risk Reduction and Management Council said that at least 56 areas are deemed critical.
Here are 8 things that you need to know about the typhoon. 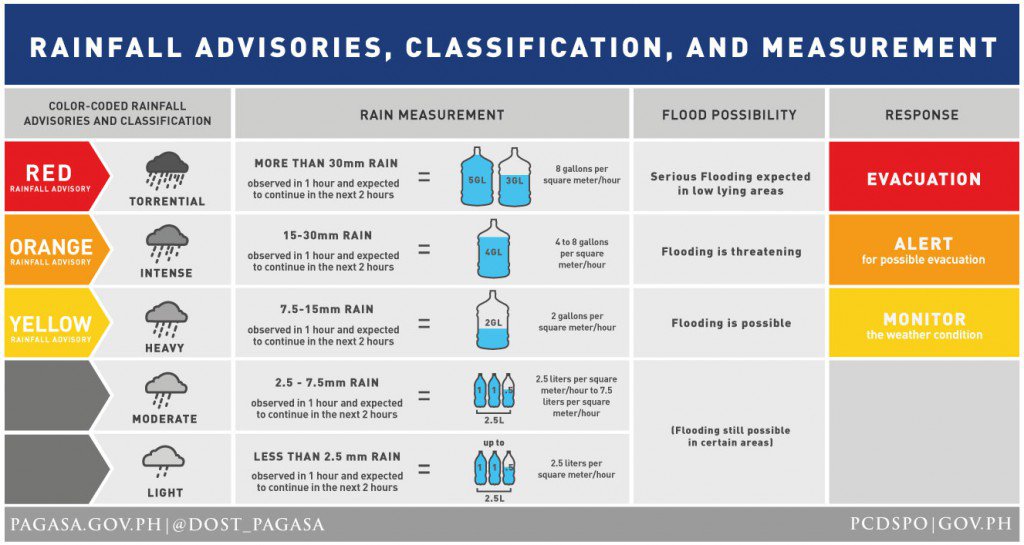 Via gmanetwork.com
The affected areas have three alert levels: A, B, and C, as well as yellow, orange, and red.
Alert levels
Level A - Moderate to Heavy, with winds of 30-45 kph
Level B - Moderate to Heavy rainfall, with winds of 30-60 kph
Level C - Heavy to intense rain, with winds of 95-110 kph
Color-coded advisories
These warning signals are raised to warn the public of incoming weather disturbances. When it is raised, it is possible that the conditions are not yet felt in the area.
Yellow - Heavy rains, flooding is possible and keep monitoring weather conditions
Orange - Intense rains, flooding is threatening so stay alert for possible evacuation
Red - Torrential rains, expect serious flooding in low lying areas and evacuate 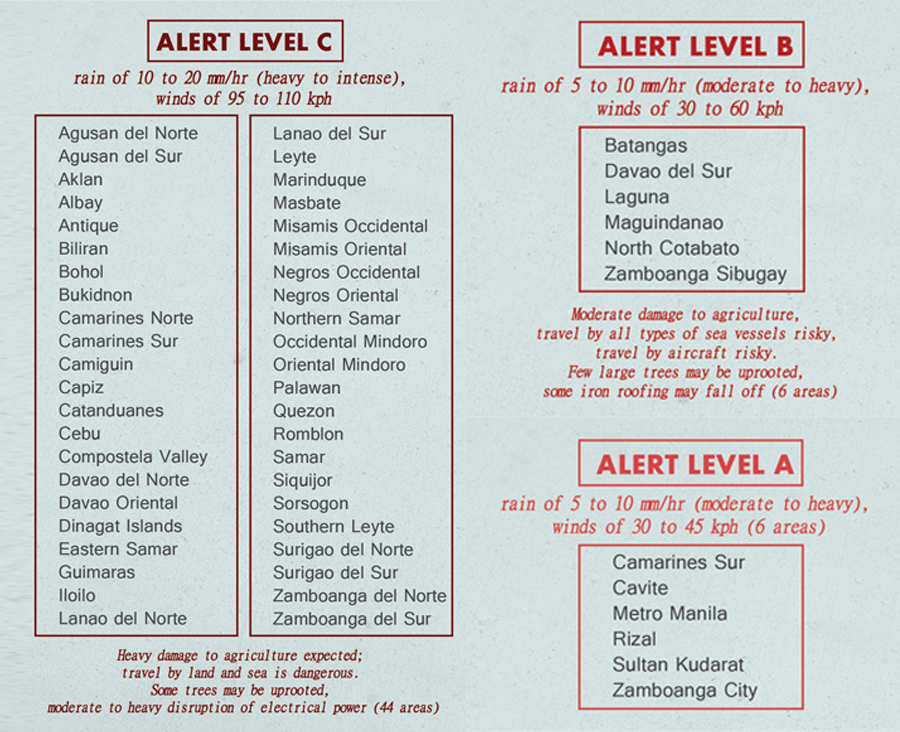 Via gmanetwork.com
Data from GMA News. 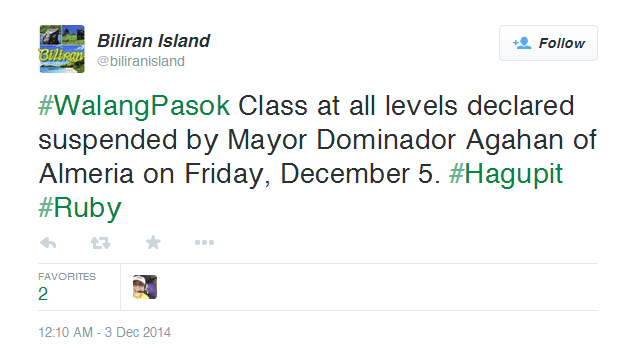 Via biliranisland's official twitter
Classes in all levels have been suspended in the following areas: Northern Samar, Leyte, Southern Leyte, Catbalogan Samar, Biliran Province, and Tacloban City (December 4 to 5); and Cebu, Culaban Biliran (December 5).
Schools: The University of the Philippines Visayas in Tacloban announced that it will resume classes on December 11, 2014. Visayas State University, on the other hand, will not have classes on December 4 to 5.
Aside from using the hashtag #walangpasok to check on class suspensions, the DepEd Twitter account is the most updated social media account regarding class suspensions. 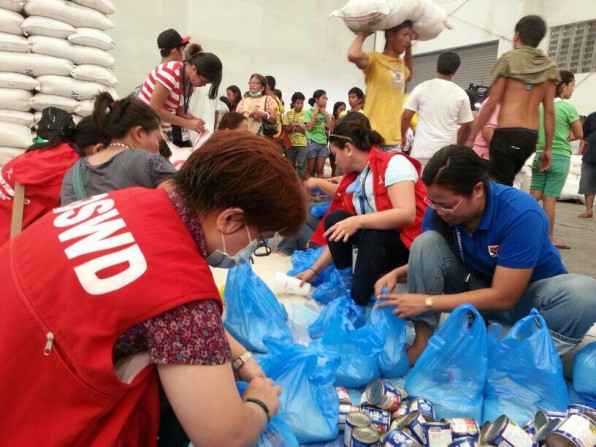 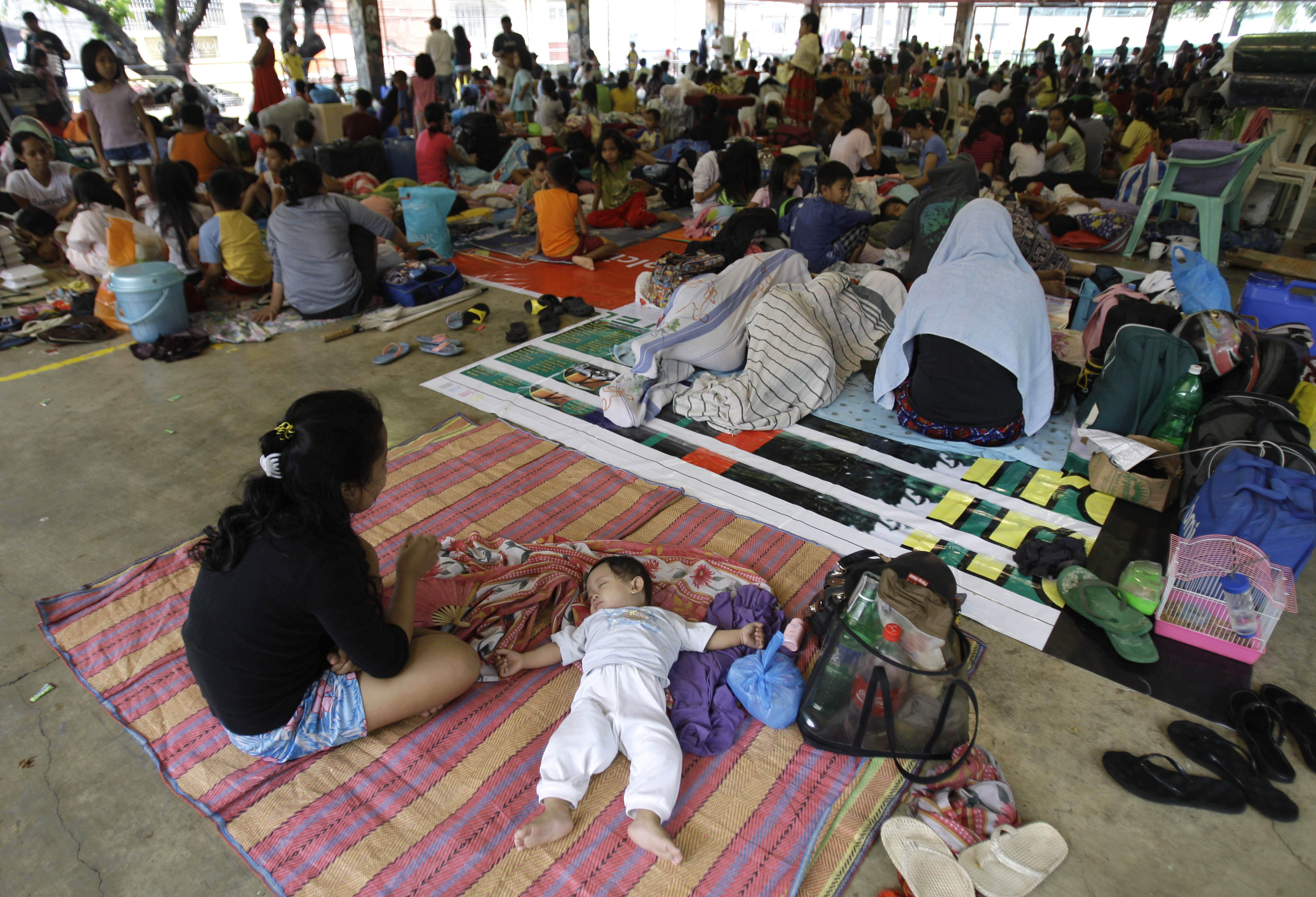 Via newsinfo.inquirer.net
In case of flooding, all Local Government Units (LGU) evacuation areas to be used in case of flooding. These are the barangay multi-purpose court, selected barangay halls, and public schools—elementary and H.S. Some churches may serve as an evacuation center.
Food and medical supplies have already been sent in anticipation of the super typhoon.
Get in touch with your LGU to know your options. If you are in an area that will be greatly affected by the typhoon, evacuate as soon as possible. Don’t wait until the typhoon to evacuate because transportation and communication may be difficult. 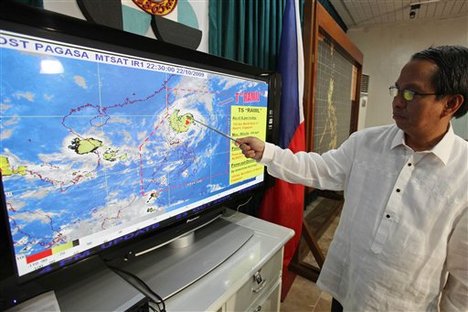 Via nhc.noaa.gov
Typhoon Ruby may bring storm surges around 3 to 4 meters tall, or 9 to 13 feet, compared to Typhoon Yolanda’s 14.1 meter storm surge in Samar Island.
A storm surge is a tsunami-like phenomenon where the water levels rise due to a storm. It is caused by the storm’s strong winds pushing on the ocean’s surface. The water then piles up and moves toward land. The larger the storm and the larger the water that is affected, the larger the storm surge.
As of now, they can only predict the height of the storm surge. The goods news is they are working on a storm surge simulator that can predict how the flood will affect the different localities and it should be completed by the end of the year.
The US Navy’s Joint Typhoon Warning Center has declared Typhoon Ruby as a super typhoon with winds up to 240kph. According to GMA News.TV, PAGASA does not yet use “super typhoon” as an official term and will start adapting it next year. 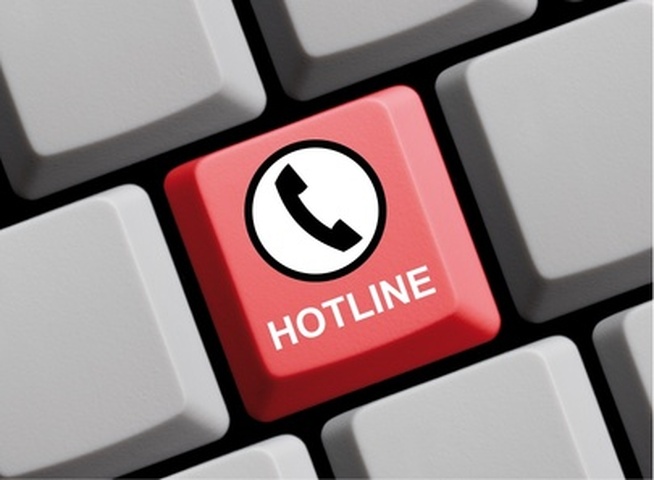