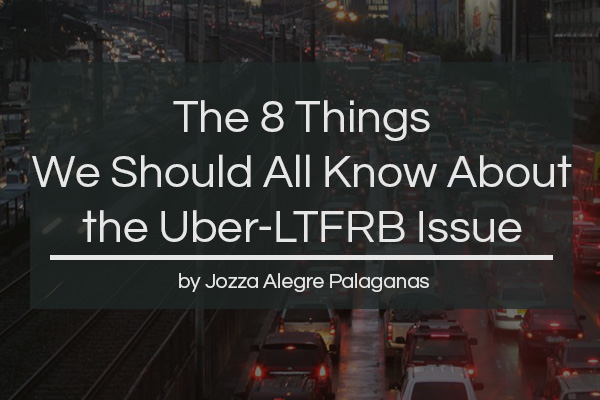 A partner car for Uber Philippines was recently caught in a sting operation by the Land Transportation Franchising and Regulatory Board (LTFRB). The car, which was an SUV, was fined Php200,000.00 and impounded for up to three months.
This issue has inflamed many Uber users on social media in the past few days, especially after the Metro Manila Development Authority (MMDA) has showed support for the ride-sharing service. But what really happened? More importantly, what should we expect to happen next?

Uber is a mobile app that allows commuters to book a ride with people who are willing to share their car with strangers.
You register with Uber using your credit card because the system works so that you do not need cash to get where you need to go, and you don’t even need to tip. The transactions are made directly between Uber and the passengers, thus making you feel safer and farther away from overcharging taxi drivers.
Uber also uses a metered fare-type pricing, except that it starts with a base rate that is multiplied depending on how high the demand is at a given time. High-demand periods are called “surges.”
People are willing to pay the premium fare on Uber because you don’t only feel safer, but you’ll also be in a private vehicle. And if you’re lucky, maybe you’ll even get the Hummer, or the Mini Cooper.
As for those who want to make extra money from sharing their car and time with passengers, all they need to do is sign up and start driving (as long as you pass the background check). You make extra money, and you have complete control over your schedule.

6. If it’s an app service, why does it need to be regulated by the LTFRB?

Technically speaking, Uber is but an app, a technological innovation that allows us lowly Manila commuters the comfort and convenience of a private car from point A to point B.
Logically speaking, booking an Uber ride has the same public transportation requirements: a vehicle, a destination, and the money you pay for fare. You book a ride through Uber, you use a private vehicle for a public purpose.
Anything that involves operating land transport for the public is within the LTFRB’s jurisdiction.

Again, anything that involves operating land transport for the public is within the LTFRB’s jurisdiction. So yes, the LTFRB has the power to regulate Uber. If you look at it this way, impounding and fining the Fortuner caught in the sting operation is well within their jurisdiction.
According to the LTFRB, they are pushing for regulation for the sole reason of passenger safety. Whatever happens to passengers in an Uber vehicle, because it’s not regulated, will not be covered by insurance.

4. What happens to Uber when it becomes regulated?

Aside from the public safety argument, the LTFRB has yet to provide scenarios other than banning Uber because of  it’s colorum status.
But regulation often has a two-pronged goal--public safety and fair market prices.
As of this writing, Uber and the LTFRB have yet to sit down and discuss regulating Uber’s operations in the Philippines.

3. Who will benefit from Uber being regulated?

Obviously, franchising and regulation spells F-E-E-S to us Filipinos. But strictly speaking, regulation should benefit the public in terms of safety, and fair, regulated fares.
Now if only we had public land transport services to use as examples to successfully illustrate this point.

2. Are there cities/countries where Uber is regulated?

This isn’t actually the first time Uber’s encountering this problem. This issue has happened to key cities where Uber is available.
Uber is banned in all of Germany (but UberTaxi, or Uber’s use of regular licensed taxis is allowed),  temporarily in Las Vegas, Reno and Carson City, and formerly in Brussels and Virginia (where the ban was lifted in July).
As of this writing, the service is regulated in Colorado and California, and is running without regulation in over 200 cities in the world.

1. Why are people of Manila generally angry about this issue?

Public transport is one of the most common, most insufferable issues in Metro Manila. You have 1) far too many vehicles on one road that cause a gridlock the moment two drops of rain reach the ground, 2) loosely regulated bus stops that make main street sidewalks, between 5 to 9pm, look like Quiapo during the Nazareno procession, 3) colorum buses whose drivers seem to feel like they’re playing Takeshi’s Castle along EDSA, and 4) abusive taxi drivers who don’t seem to be aware that traffic is bad everywhere.
It’s the LTFRB’s job to keep all these things in order and the all too earnest clawing of Uber--a service that’s generally considered to be helpful--merely places a glaring spotlight on their failure to deliver much-needed solutions to the transport-related conundrums of the EDSA-stuck masses.
Share your thoughts and feels about this issue in the Comments Section below.

Jozza has two life pegs: Martha Stewart and Jonah Peretti. She dreams of one day owning a juicer and the Internet. In the meantime, she's 8List's managing editor.