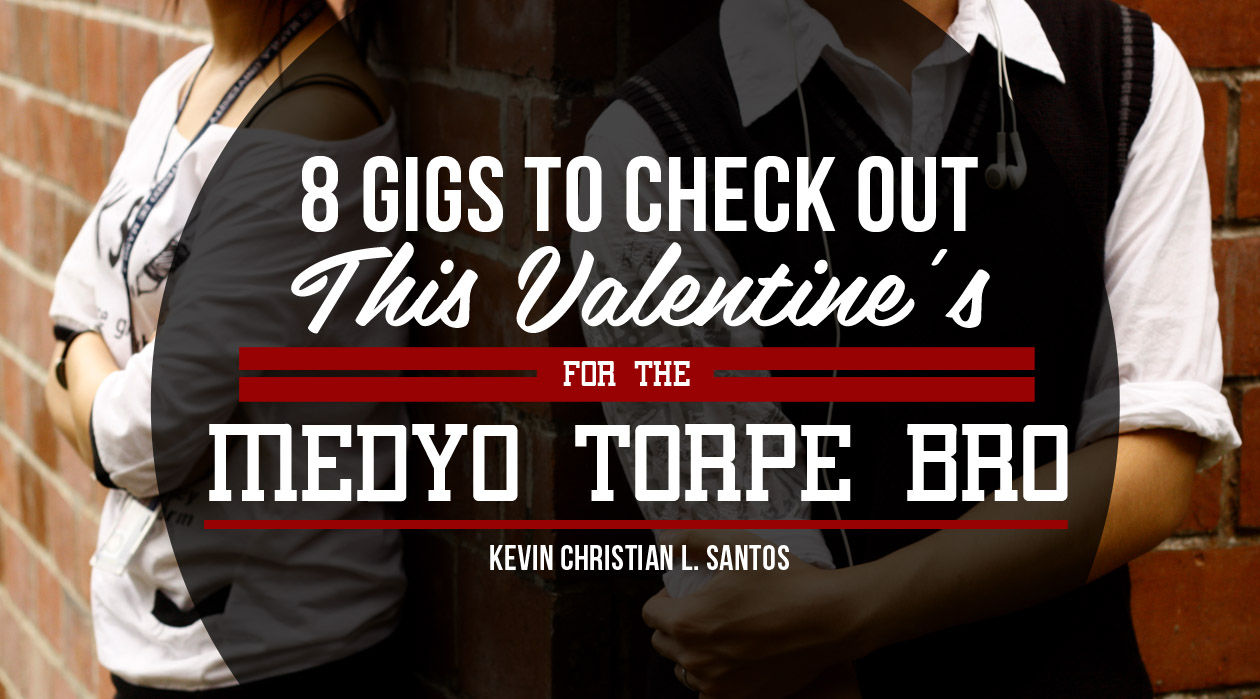 The Valentine’s Day clock is ticking.

Typically, there are three types of people around this season: (1) those who are planning something special for their significant other, like maybe a romantic dinner and a movie (*cough-CLICHE-cough*); (2) those who are dread the date, wallowing in or relishing (translation: sourgraping) the fact that they are alone; and (3) those guys who just sincerely couldn’t care less.

But what about the guys in a Mutual Understanding (apparently, that’s still a thing), “hindi nalang namin napapag-usapan” phase with the apple of their eye? Or the dudes in that delicate, fragile Ano-ba-tayo limbo where there’s a 50% chance that an invitation to anything vaguely romantic could shove you right into the friendzone? What do guys in this margin do? Where do they go?

Fret not! From groovy (also: casual) gigs to the walking dead, we’ve got you covered. You’ll be turning that MU into HHWW pasway-sway pa in no time (and yes, that is also still a thing)! 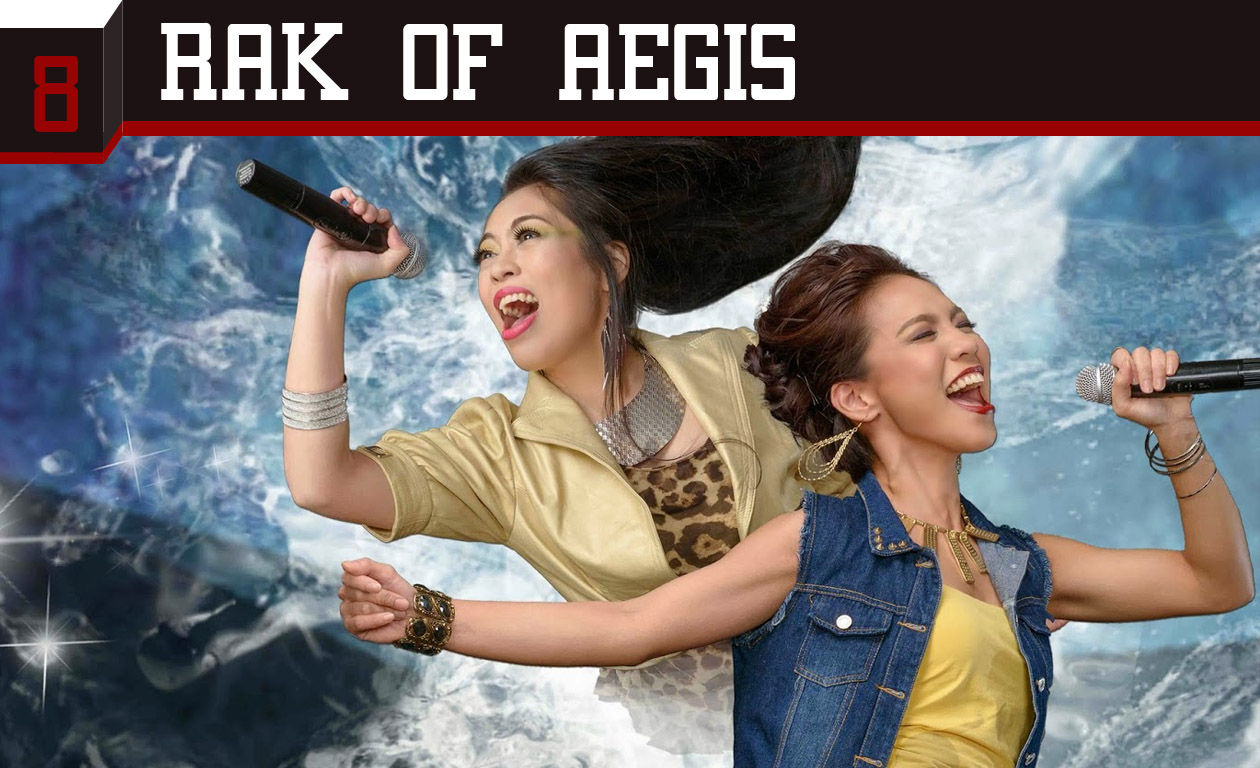 Via vintersections.com
Rak of Aegis is a musical comedy featuring the music of perennial karaoke favorite Aegis, in  a show that celebrates the resiliency of the Filipino spirit, from facing national calamities to nursing a broken heart.
Why it’s a good idea: You celebrate your nation’s pride and rock out to some power ballads! The show’s guaranteed to make you and yours smile and give your lungs out a hearty workout (because admit it. You’ll be yelling your guts out once “Luha” plays). With the connection you get from the fun show, you can maaaybe plant that kiss. And maybe, ang halik mo, mami-miss niya. (See what we did there?)
"Rak of Aegis" is playing at the PETA Theater Center, No.5 Eymard Drive, New Manila,
Quezon City.
Ticket Prices:
VIP P1,000
Orchestra P800
Balcony P600
Visit their Facebook Page for more details. 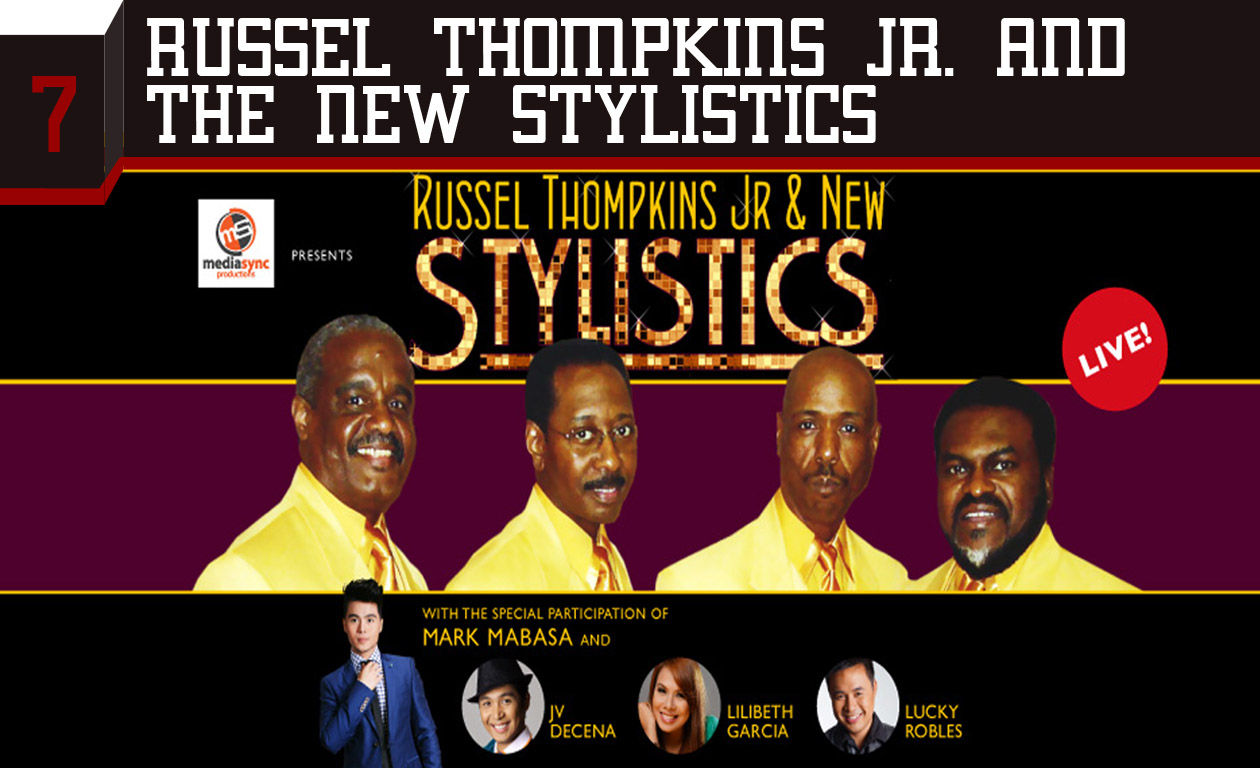 Via rwmanila.com
Though no longer the original lineup, founding member Russel Thompkins Jr. and The New Stylistics guarantee to give their audience a night they’ll never forget as they belt out their classic 1970’s R&B Top Ten hits such as “You Make Me Feel Brand New,” “I’m Stone in Love With You,” “People Make the World Go Round” and more.
Why it’s a good idea: With a lineup of songs from their discography, it’ll only be a matter of time before you and your soon-to-be lover break out the scented candles and light up each other’s lives. Betcha by golly wow!
Ticket Prices:
7 PM for the EDSA Shangri-La Concert on February 14, 2014
Price Zone 1 (w/ Dinner) P7,476
Price Zone 2 (w/ Dinner) P6,408
Price Zone 3 (w/ Dinner) P5,340
Click here for more information. 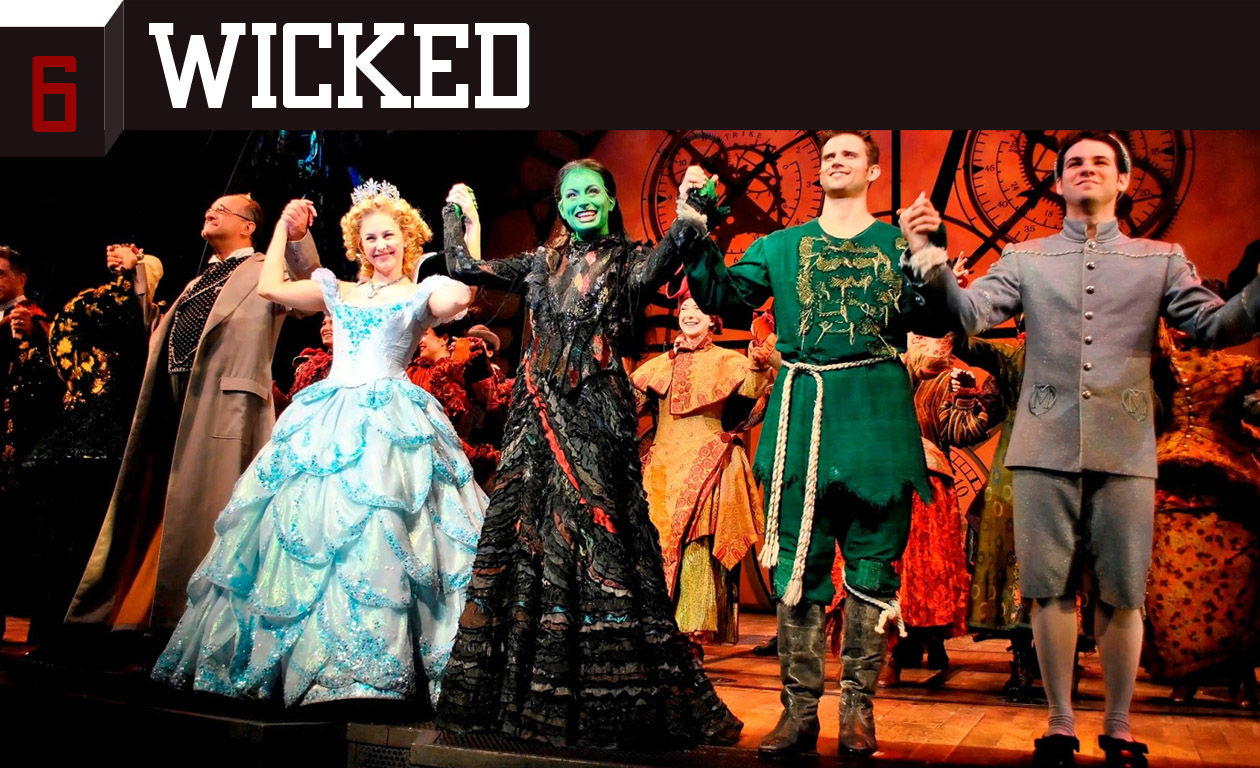 Via broadwayworld.com
The musical has a loyal cult following (it’s that good) and its Manila show has received rave reviews for its face-melting set design and of course, the jaw-dropping performances littered with many shrewd puns and funny moments.
Why it’s a good idea: Okay, maybe you’re not much of a theater guy--much less the singy, songy type. But the “Wicked” run in Manila is a rare occurrence (and so is your love) so it’ll be, erm, wicked(?) to experience this what could be once and a lifetime event together. So even if it never works out, you’ll always have “Wicked.”
Catch "Wicked" on Valentine's Day 7:30PM at the CCP Main Theater. For ticket prices, please click here. 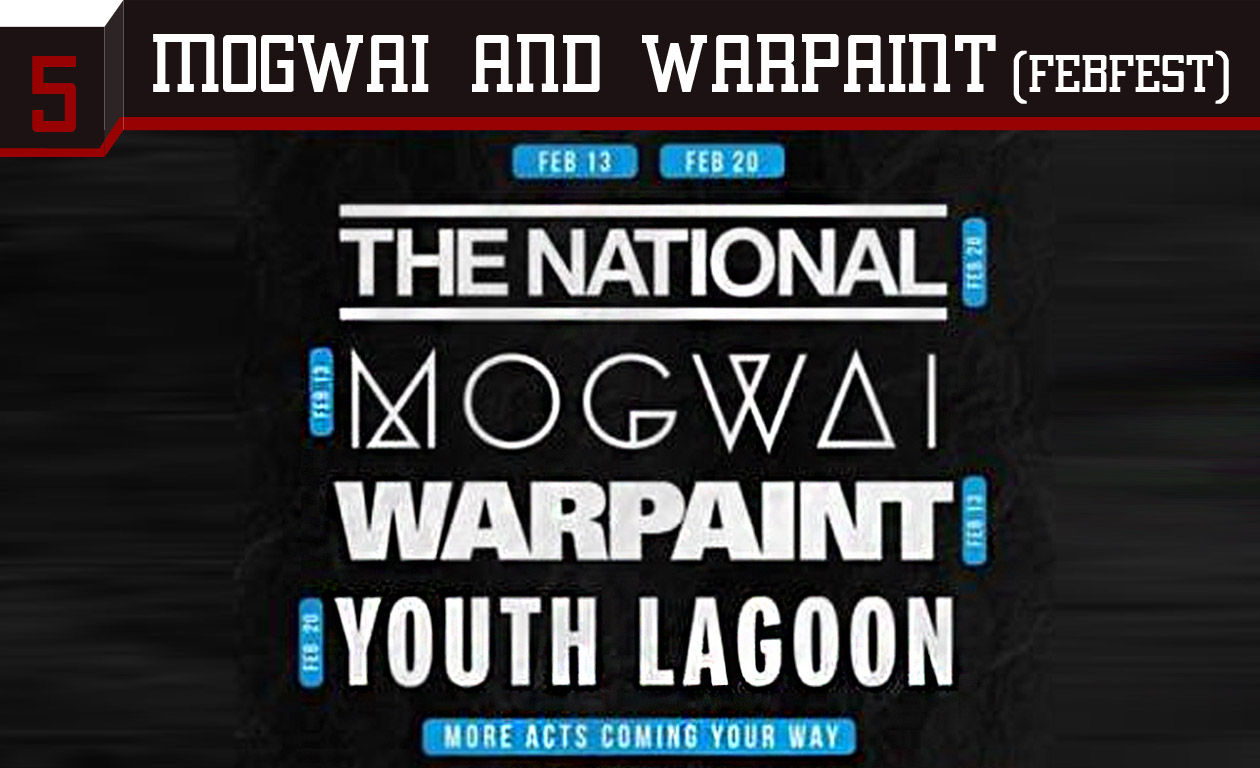 Via ticketworld.com.ph
Scottish post-rock band Mogwai and LA indie band Warpaint will be playing in Manila as part of FebFest 2014 presented by Hostess Club Manila in a night that will thrill local music fans with highly emotionally-charged tunes.
Why it’s a good idea: This show is brought to you by the same production that brought The XX in Manila, so you know you’re in for a treat. Mogwai are post-rock legends that will no doubt unleash heart-pounding riffs that will take your senses on shifting, sonically-fueled landscapes. Paired with Warpaint’s somber yet psychedelic sound, you’re bound to go on an emotional journey. And maybe that’s precisely the kind of journey you need.
Catch Mogwai and Warpaint on February 13, 2014 at Metrotent, Metrowalk Plaza, Meralco Avenue, Pasig City.
Ticket Prices:
VIP P3,011.68
GOLD P 2,151.20

Via Black Market's Facebook
Critically-acclaimed French hiphop beatmaker Onra is set to rock Manila this Valentine’s Day as he delivers smooth hiphop, funky and jazzy beats.
Why it’s a good idea: If Jay-Z) himself gave Onra’s 2012 LP Long Distance massive praise. If you think you guys are ready for some bumpy-grindy fun, Onra’s smooth jazzy grooves and the gig’s drink-all-you-can promo is the perfect combo.
Onra will be playing at 9PM on Valentine's Day at Black Market, Warehouse 5, La Fuerza Compound 2, Sabio St, Makati.
Door Charge + Drink All You Can (selected beer & Rum Coke) is P800. 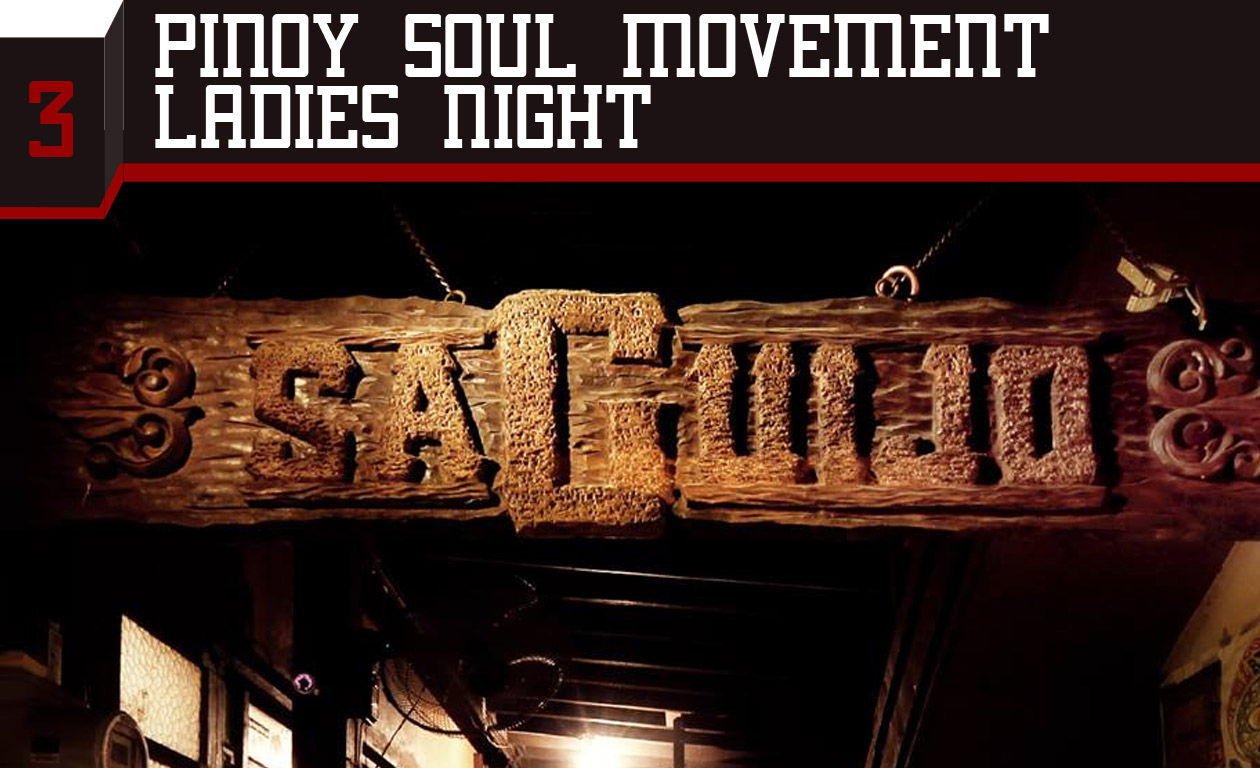 Via Saguijo's Facebook
Pinoy Soul Movement gives it up for the ladies this Valentine’s Day. Get Pinoy soul in awesome doses from Nyko Maca, Julianne, Uela and more!
Why it’s a good idea: Your earnest interest in female artists who make great music and the confidence to make enough eye contact will may just get you on the path to establishing that soulful connection. You may just find yourself walking out of the bar hand in hand.
Catch this gig on Friday, 9PM at Saguijo, 7612 Guijo Street, San Antonio Village, Makati City.
Ticket is P150 with a free bottle of beer. 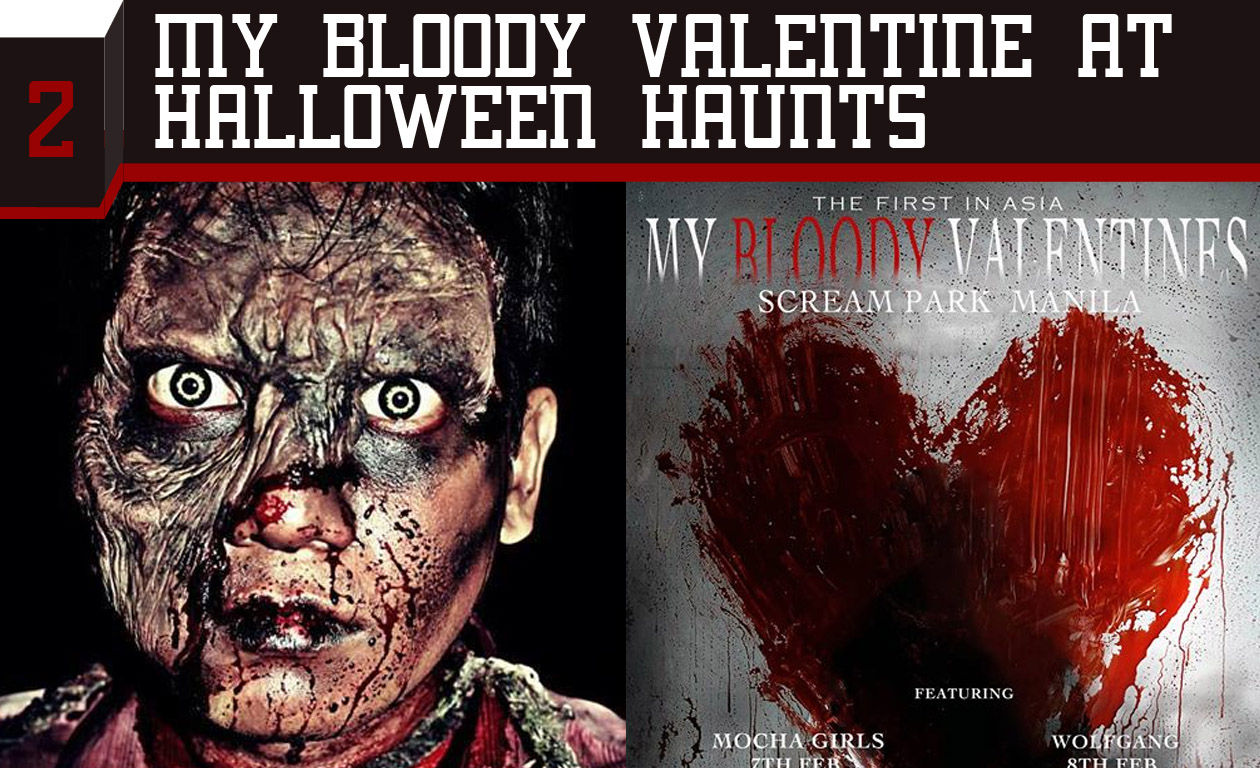 Via Screampark Manila's Facebook
The Halloween Haunts Scream Park is a horror-themed amusement park, the first pants-wetting kind in Asia. Yes, for the first time in the Philippines, there’s a theme park designed to scare the living sh*t out of you.
Why it’s a good idea: If you’ve been living under a rock, you know horror movie clichés involve the girl clinging to a guy whenever something scary happens, so better work on your biceps broooo (like this guy). Though there is a chance that you’ll be much more frightened than she’ll be (like this guy), you’ll be holding and gripping on to each other with as you make your way past pants-sh*ttingly terrifying mazes and if that weren’t enough, zombies will also be running after you. How romantic!
Halloween Haunts Scream Park in Macapagal Avenue in Manila is open from 6PM to 2AM.
Ticket Prices:
General admission P550
Groups of 10 and more P500
Students (present your ID) P450 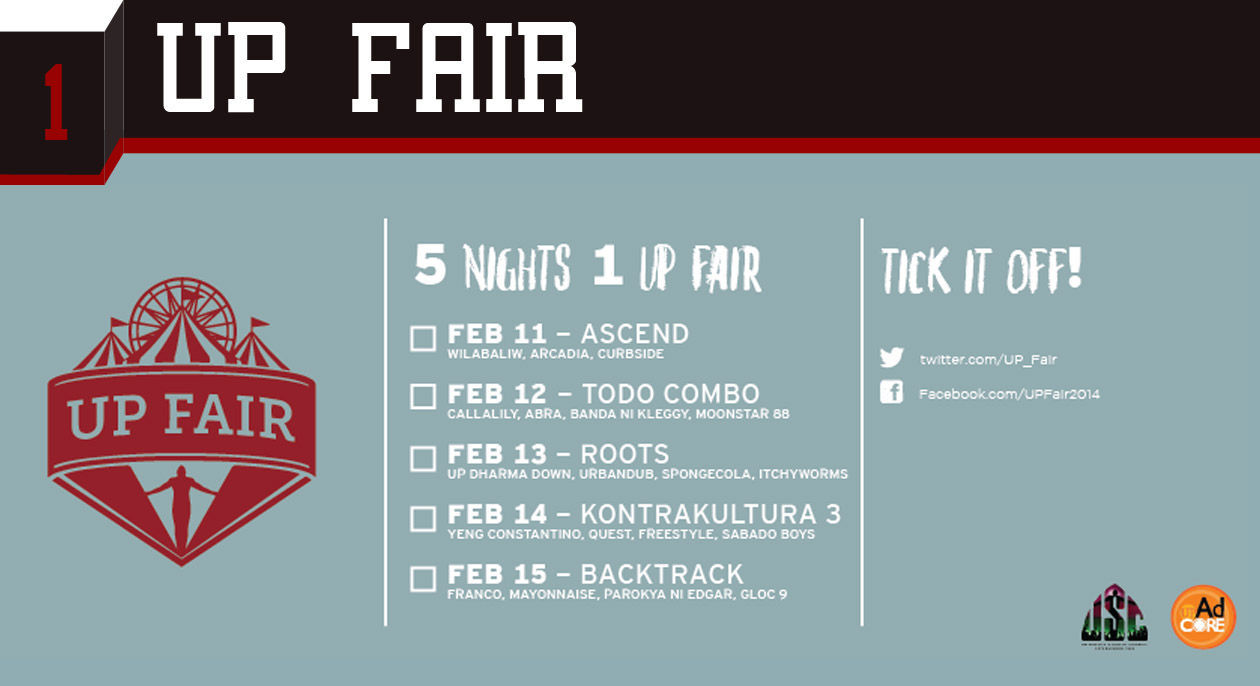 Via UP Fair Event page
One of the country’s biggest, longest-running and most popular college fairs, the UP Fair is a week-long college festival that features the country’s hottest music acts as well as fun activities for everyone to enjoy.
Why it’s a good idea: There’s a reason why the UP Fair happens on Valentine’s week. You get to rock out to a diverse and eclectic lineup of some of the best local music has to offer! Plus, you and your “date” can reminisce on the good times you guys had back in college and get all nostalgic as you snack on some of Mang Larry’s isaw or take a trip to Rodic’s! Maybe you can even get henna tattoos to laugh at till the week after? Dude, this is a no-brainer create-great-memories formula. You’ve got this bro!
Ticket: P120
How about you? Where are you taking your MU? Help your bros and share some torpe tips in the Comments Section.