8 Reasons Why Vigan is a Wonder City 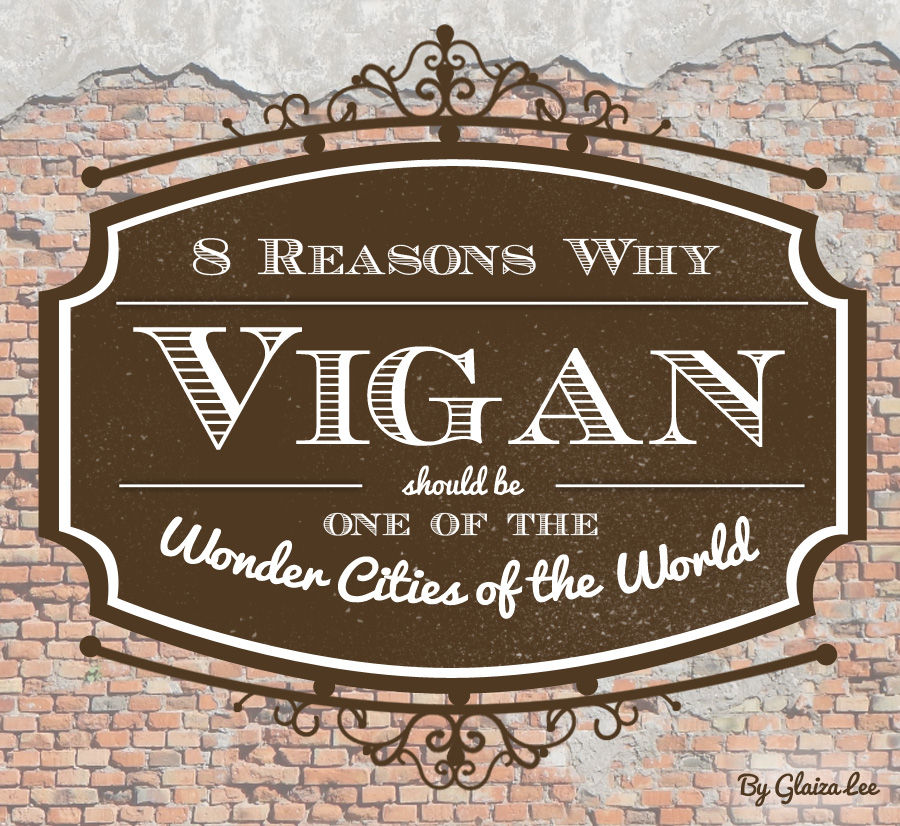 [dropcap letter="T"]he heritage city of Vigan in Ilocos Sur is still in the running to become one of the 7 Wonder Cities of the World. In this penultimate round of the race, this northern city made it to the list of 21 finalists and will compete against the world’s best cities such as Bangkok, Barcelona, Istanbul, London, Mexico City, Mumbai, Perth, Reykjavik, Saint Petersburg, and Seoul to make it to the next round.
To vote, visit the website (www.new7wonders.com) and cast your vote. Aside from that, votes may be cast through mobile applications for Apple and Android devices. Voting can be done through text messaging and/or through international phone (+881821611990; +881921611990;+34902735471; +447589975201; +447559121023; and+447559583500).
Voting for the 7 Wonder Cities ends on October 7, when the list will be further reduced to 14. The new 7 Wonder Cities will be revealed on December 7, 2014.
You might ask: why should you vote for Vigan? Here are the 8 reasons why this place is, indeed, a "wonder" city. 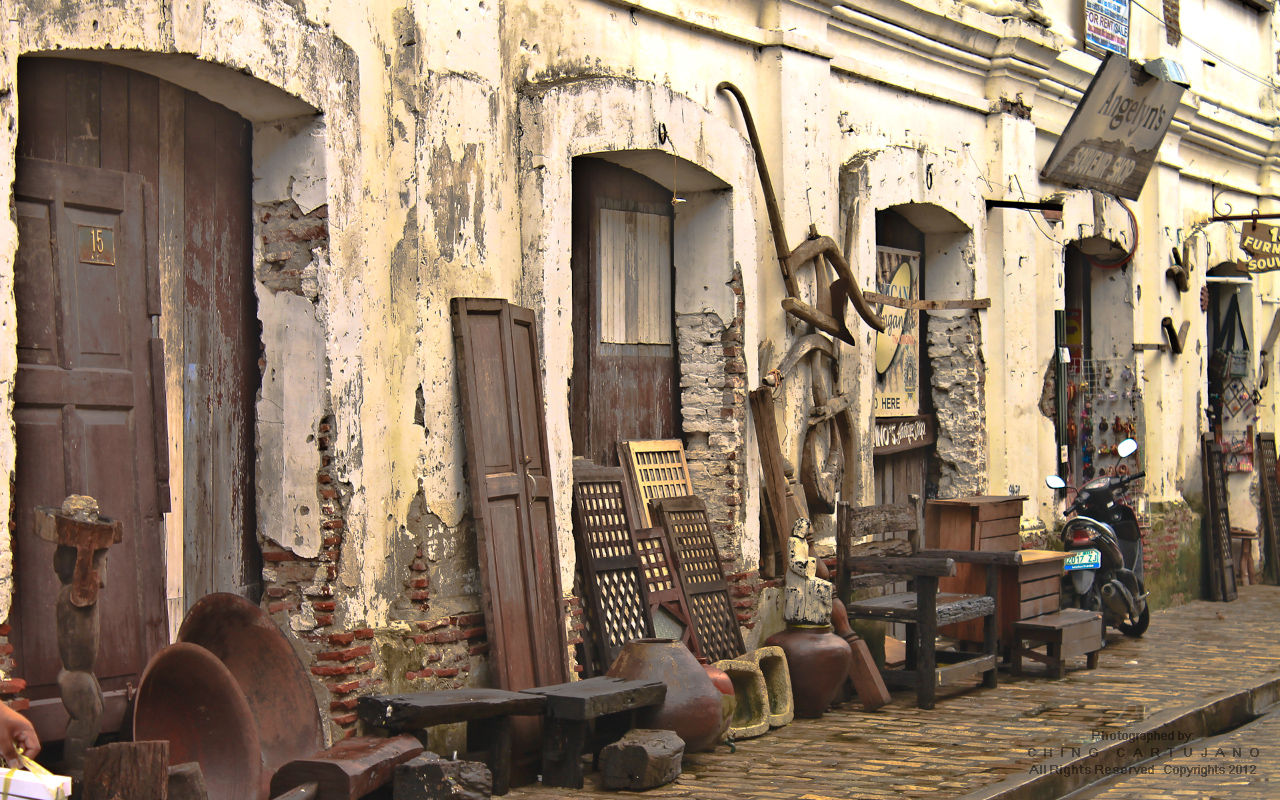 Via tripperspot.wordpress.com
Did you know that the first major revolution against the Spaniards was waged in Vigan? During the British military incursion in the Philippines in September 1762, revolutionary leader Diego Silang saw an opportunity to lead an Ilocano revolt against the Spanish forces. That time, Ilocano people had long suffered from unreasonable taxes, unpaid labor for the construction of religious and government structures, and suppressive monopolies that the Spaniards imposed on the town. Working as a courier for Vigan parish priest, he saw these abuses and called for revolution.
When he failed to negotiate with the Spanish authorities to establish a government in Ilocos with Ilocano functionaries, he worked with British forces to defeat the enemy in the north and gained control of Vigan three months after. However, the British’s promise to strengthen his forces and complete his plan unfortunately never came. Diego Silang was later killed by his friend Miguel Vicos upon the instigation of the Spanish church and government.
His wife Gabriela Silang took over and continued the revolution. Her valiant effort however was overpowered by the Spanish forces, causing her retreat to Abra. She tried to lead her army back, but was again repelled. She was later captured and put to death publicly by hanging, along with her other comrades, in 1763. She is now known as the Philippine’s Joan of Arc and the first female leader in Philippine revolution. 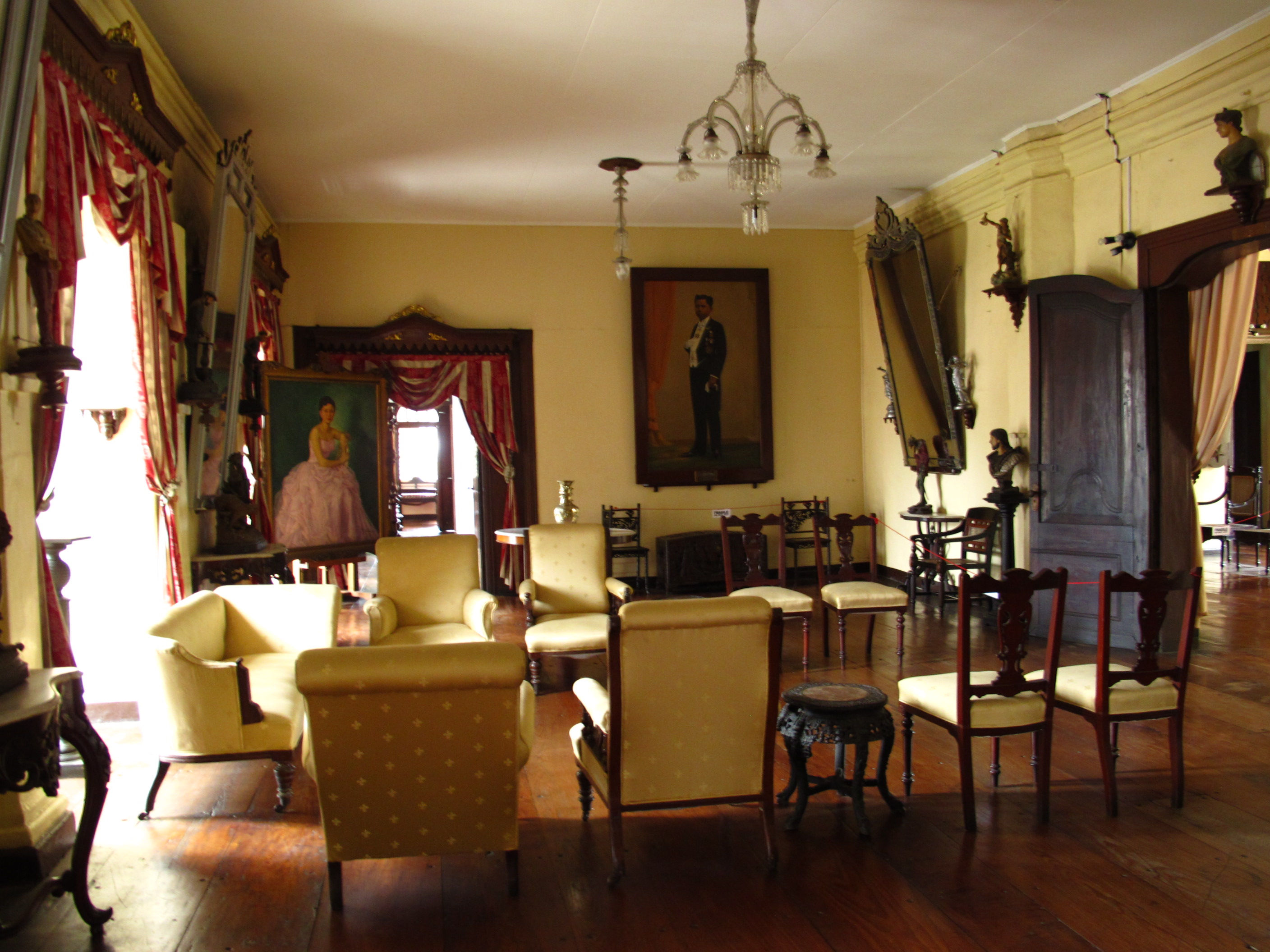 Via marilil.wordpress.com
Vigan is home to several ancestral houses that have been transformed into museums. Together, they create a massive and extensive historical collection from the Spanish period. Top on the list is the Syquia Mansion which houses 6th Philippine President Elpidio Quirino’s memorabilia. These historical items were actually owned by his wife Dona Alicia Quirino whose Chinese ancestry made fortune in the robust trading in Vigan. Sy Kia, the ancestor of the Syquia clan, was very proud of his Asian heritage which can be seen in the architectural influence in the mansion. During the term of President Quirino, the Syquia mansion became the venue for some of the presidential functions and events.
Another must-visit is the Crisologo Museum, which was established in perpetuation of the memory of a tragic event that happened to the clan patriarch, Floro S. Crisologo. He was a congressman known for being responsible to some landmark legislations that benefited his constituents such as the law that created the first state university in the North and the establishment of the Social Security System. The public servant was later shot in the head by a still unidentified gunman while he was inside the St. Paul Cathedral in 1970. His wife Carmeling and his children vowed to never exact revenge, but made sure that his life and death will not be forgotten. 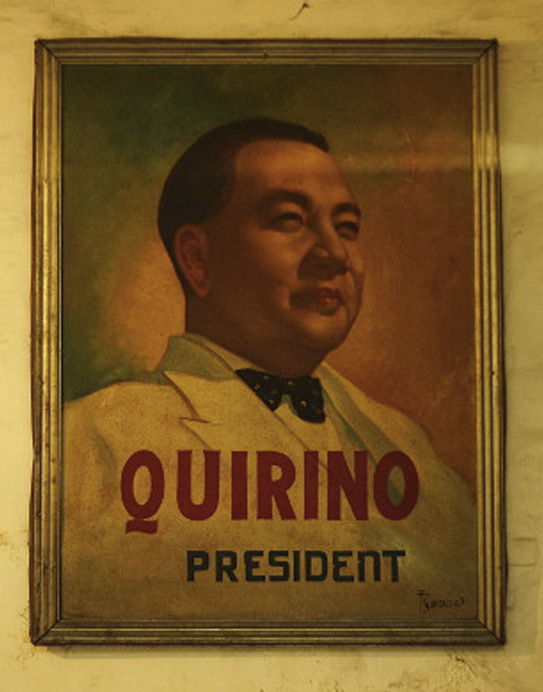 Via kilovox.com
Aside from President Quirino and Congressman Crisologo (who both hailed from the heritage city), Vigan has produced some of the great minds in history such as Leona Florentino who was recognized as the first Filipina poet who achieved international recognition. She was the mother of Isabelo delos Reyes, the first champion of the labor movement in the Philippines and the Philippine Independent Church. Delos Reyes has also made his mark in the Philippine literature and became the founder of the first newspaper in local dialect, El Ilocano.
Vigan is also home to National Folk Artist Fidel Go who was awarded the highest award by the National Commission on Culture and the Arts in 1990 for his exemplary effort in preserving the tradition of burnay-making. 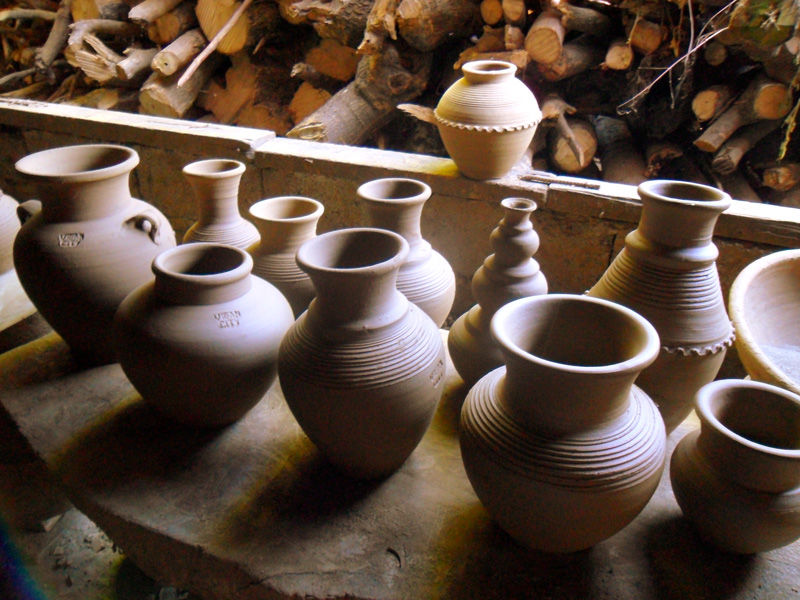 Via dbrightspot.wordpress.com
A trip to Vigan is never complete without learning a thing or two about its traditional arts and culture. A visit to pagburnayan allows you to meet GAMABA artist Fidel Go. The burnay industry dates back to pre-colonial times when Chinese immigrants came to settle in Vigan and created earthenware made from clay. With the skillful hands of the potter and the use of pottery wheel and kiln, the clay is fashioned into desired shape, making it one of the most-sought items by tourists.
Aside from the century-old tradition of burnay making (pottery), there is also the abel, the traditional hand-woven cloth. Made from sagut or cotton, abel weaving is quite intricate and labor-intensive. Different colored yarns of cotton are manually arranged in a wooden handloom; then the weavers must master the synchronized movements of their hands and feet to create beautiful design. 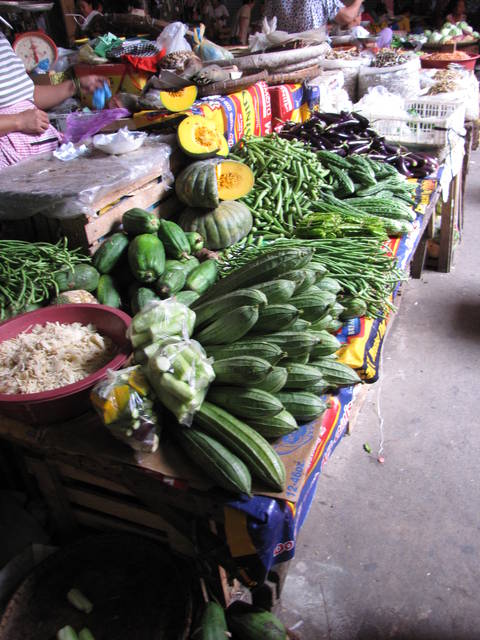 Via hobotraveler.com
Vigan is predominantly an agricultural town. Farmlands occupy around 1,300 hectares of Vigan, extensively utilized for planting agricultural products such as rice and corn. The farmers use crop rotation; hence, they also grow corn, sugarcane, kamote, garlic, onion and Cavendish bananas.
Biguenos so love their vegetables that the Vigan cuisine revolves around them. That is why they also dedicate their lands in planting vegetables such as ampalaya, cabbage, eggplant, tomato, squash, and mongo. They also have root crops such as cassava, jicama, peanuts, sweet potato and yam. 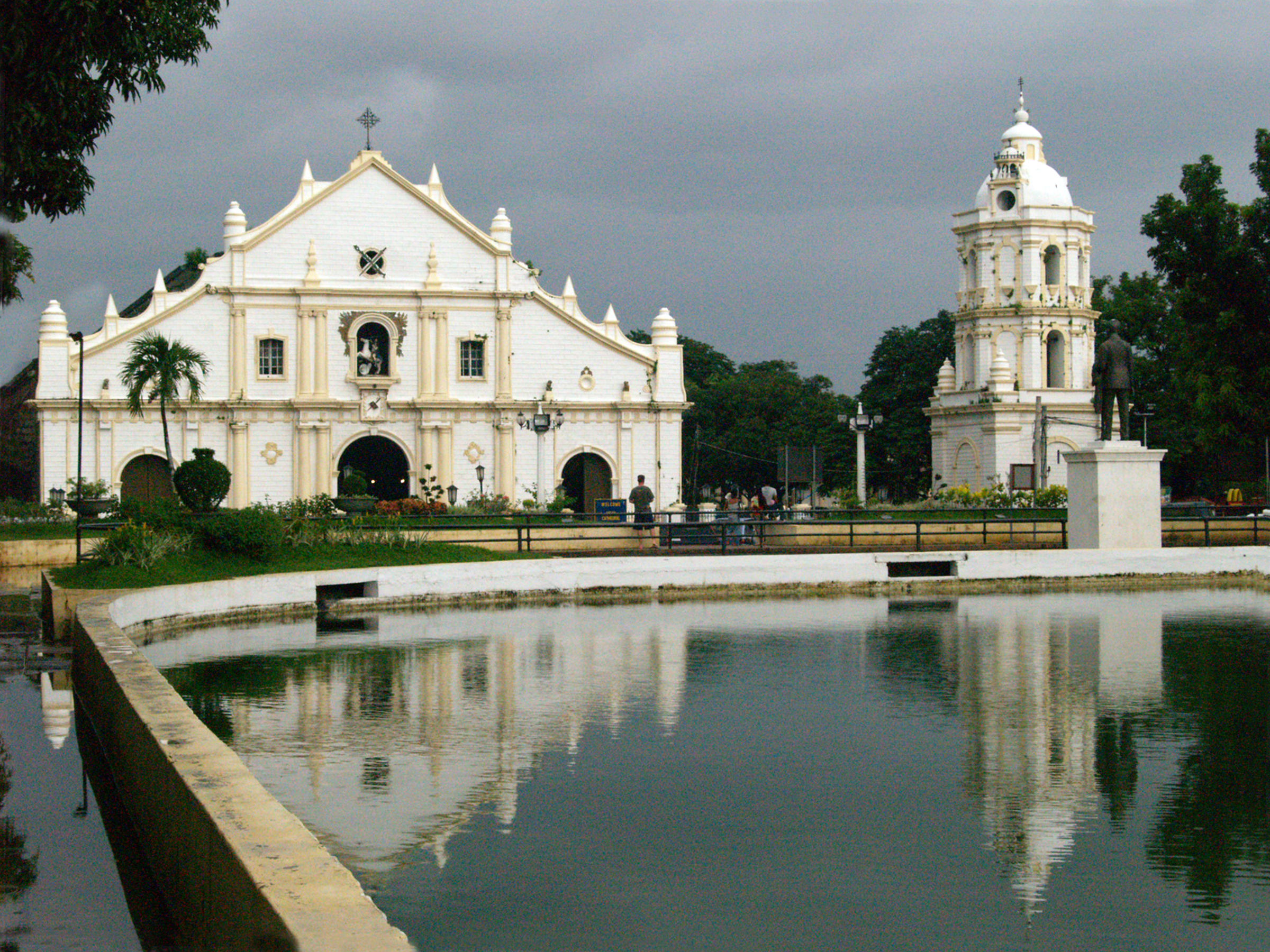 Via nschancery.wordpress.com
Just like the rest of the country, Vigan is predominantly Catholic. Religion plays a vital role in the different aspects – social, economic, educational and political – of the people’s lives. The center of this is the St. Paul Cathedral, located near other historic buildings such as the Episcopal Palace, the Vigan Municipal Hall, the Capitol Building and the town plazas, Plaza Salcedo and Plaza Burgos. Most festivities here are centered on religion. The Semana Santa, for example, is the religious observance of the passion and death of Christ; while Tres de Mayo commemorates the successful journey of St. Helena and her son Prince Constatine in their search for the cross where Jesus died and celebrates the feast for Apo Lakay or the Black Nazarene. 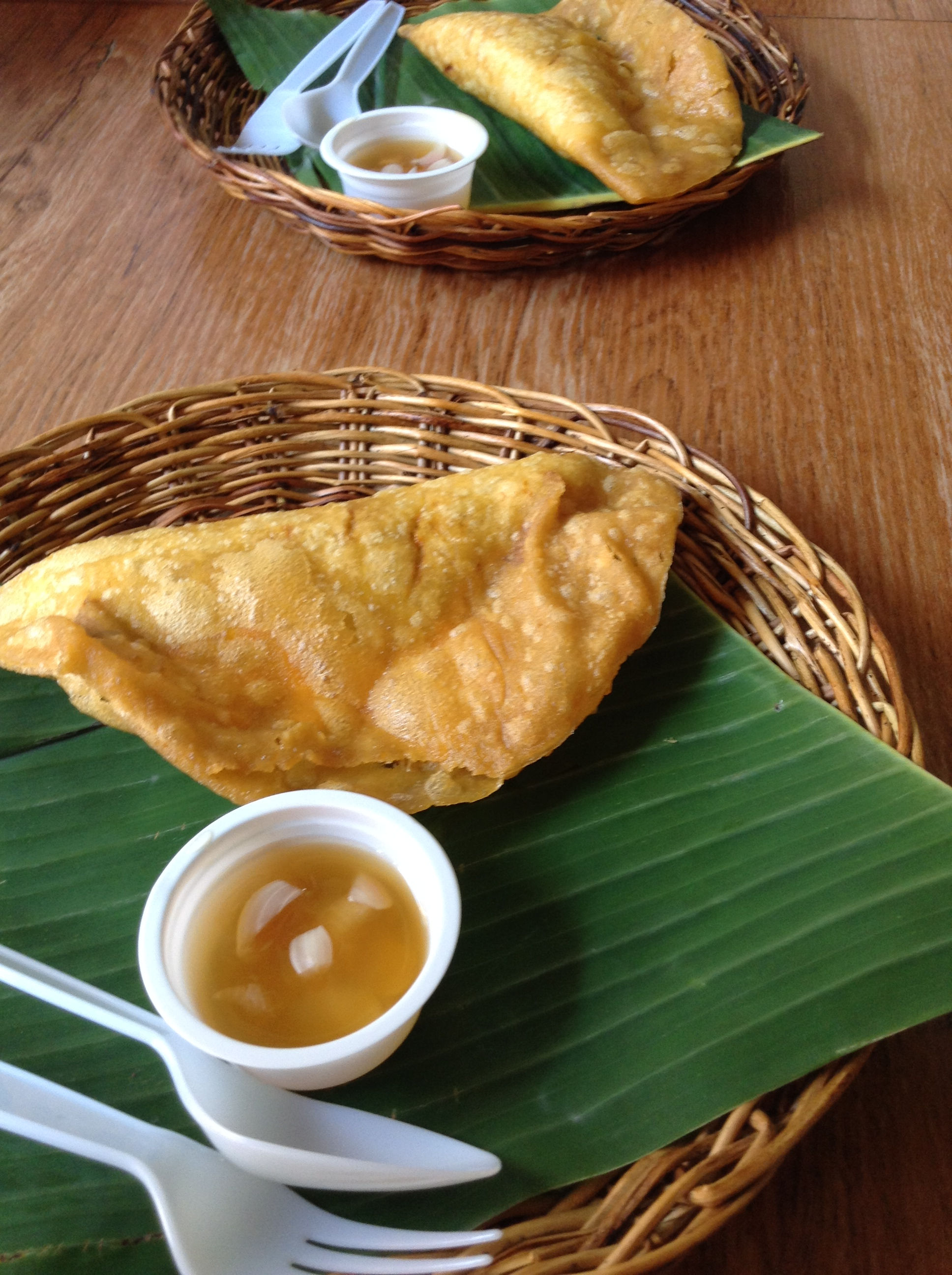 Via katarinagarciaonline.wordpress.com
Pinakbet, empanada, longganisa, bibingka, bagnet, pipian, poque-poque, sinanglao, igado – you name it, Vigan has comfort food to a T. Simple yet flavorful, Vigan cuisine is known to keep the natural flavor of each ingredient and often characterized by sweet, sour or salty taste. Most people cook these dishes by using what is naturally available in their area.
One of the must-try here is the Vigan empanada. Likened to a taco, it is made from ground rice flour used to make dough for the crust or shell. The dough mixture is then kneaded as thinly as possible on a banana leaf. The filling is made from grated green papaya, toge or mung bean sprouts and shredded carrots, with meat from Vigan longganisa and egg.
Don’t forget about the kankanen, an Ilocano term that collectively refer to Vigan delicacies. In the olden times, these native delicacies were prepared only during special occasions and fiestas. But now, one can enjoy these delicacies throughout the year. Try the famous bibingka, biko-biko, binagkal, dila-dila, kalamay, kaskaron, latik, patupat, puto and tinubong from the kankanen makers of Barangay San Jose in Vigan. 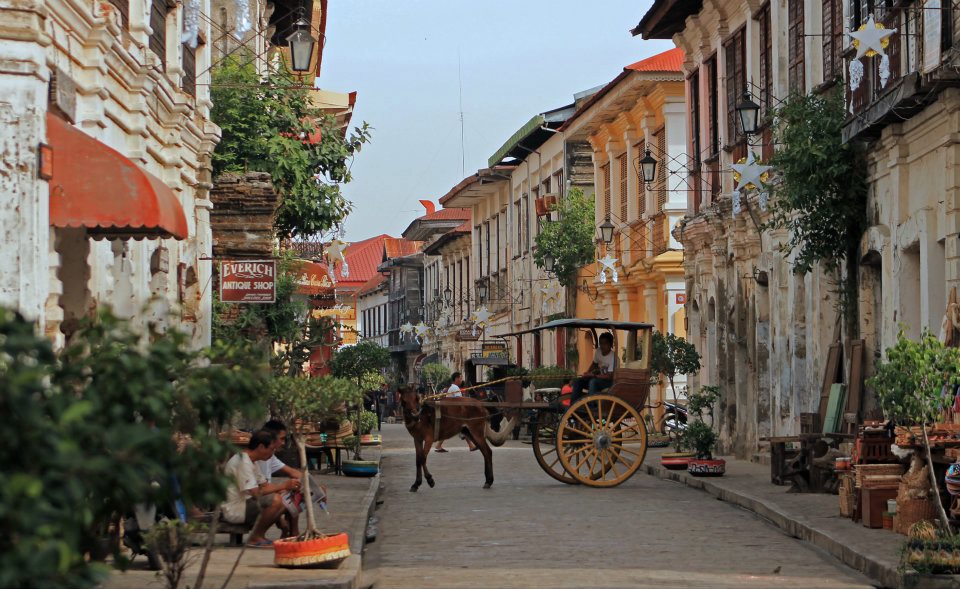 Via cheapflighthouse.co.uk
Established in 16th century, Vigan is a best-preserved model of a Spanish colonial town in Asia. The architecture, especially along Calle Crisologo, reflects the diverse influences from China and Europe, resulting in a culture and townscape that is quite unparallel anywhere in East and Southeast Asia. In 1999, UNESCO declared Vigan as a Heritage site. This well-preserved Spanish trading town has survived the test of time, with bombings during the World War II, earthquakes, and other calamities.
Biguenos take pride in preserving their culture, history and architecture. Government, private organizations and its constituents aim to keep their long-term goal of preserving the 630 heritage structures in their city that date back from the 18th century. Calle Crisologo and the nearby streets transport tourists to the bygone era, in the Spanish colonial period, when people lived prosperously because of the Manila-Acapulco galleon trade.