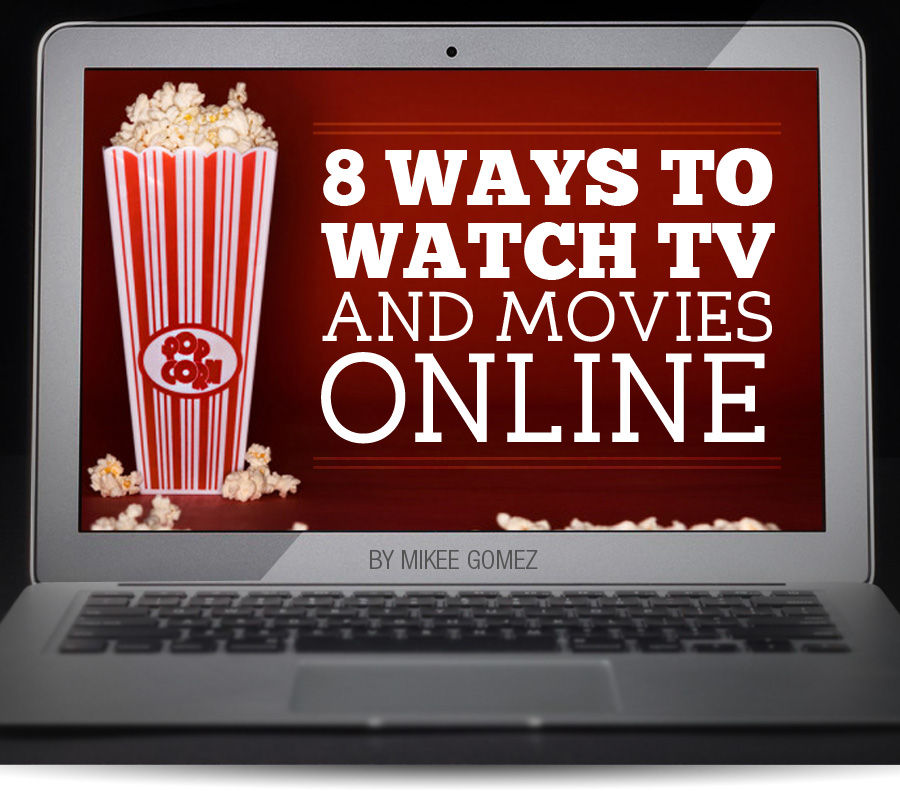 [buffer by="0px 15px 0px 15px"] [dropcap letter="W"]hen TV, movies and the Internet decided to hold hands and stick together, they took the entertainment industry by storm. The result has allowed viewers to watch their shows and movies more conveniently and in larger volumes—but it also carved out a problem called piracy. There are many ways to consume media online, and we’ve taken a look at a few them. We don’t encourage you try them all, but for your awareness, here are 8 ways to watch TV and movies on the Internet: [/buffer]

[buffer by="10px 15px 0px 15px"] NimbleTV is the closest thing to the actual TV experience that we’ve found. NimbleTV takes your cable subscription, puts it online, and you can access TV channels (in real-time) on devices like laptops, phones, and tablets. It can also record multiple shows into its cloud and you can watch anytime, anywhere you are in the world. But if you don’t have an existing cable subscription, you can sign up for NimbleTV’s channel lineup. It's pretty impressive with over 140+ channels including the likes of HBO and Showtime ESPN. It's not free of course, but the rates vary depending on the channels you choose. The only catch is that you need to come up with a New York address before you can subscribe to the premium service. While NimbleTV isn’t in the Philippines yet, you can avail of a free trial by clicking here. [/buffer]

[buffer by="10px 15px 0px 15px"] Launched in 2005, YouTube democratized entertainment by giving everyone a chance at the limelight. The result is now a library of cat videos, music videos, tutorials and user-generated content. There’s a lot to sift through but there we’ve managed to find a few TV shows and movies you can watch. We can’t vouch for the legality of all the content but if the material is a really old classic, then it’s most likely part of public domain and is completely legit. [/buffer]

[buffer by="10px 15px 0px 15px"] Networks like HBO and Fox have been trying to cater to their audience online and outside conventional television. They offer video on-demand services like HBO GO and Fox Movies Play via a cable provider like SkyCable. Fox Movies Play has a selection of Hollywood movies, series, events, and documentaries. HBO GO on the other hand offers its library of HBO Original series, films, documentaries, as well as behind-the-scenes content. Keep in mind that these services are dependent on the parent network, meaning you only get content that they have the rights to distribute. If you’re not a fan of either network, you may want to think twice before subscribing to the service. [/buffer]

[buffer by="10px 15px 0px 15px"] iWantTV is video on-demand with a local flavor. It’s the online home for ABS-CBN shows ranging from current affairs to teleseryes. It even has a selection of local movies which we’re sure you won’t be able to find from iWantTV’s foreign counterparts. To subscribe to this service, you’ll have to sign up with SkyCable, SkyBroadvand, BayanDSL or Bayan Broadband. iWantTV seems like a great way to stay in touch with Philippine television (or at least ABS-CBN), but it unfortunately doesn’t work outside the country. [/buffer]

[buffer by="10px 15px 0px 15px"] Hulu and Netflix have been game changers in the TV industry and are major players in the business of content streaming. While both services aren’t available in the Philippines just yet, we’ve been hearing about people who have managed to avail of the service by means of a VPN or DNS Proxy. Tech terms aside, all it really does is make you look as if you’re using the Internet from the USA when the truth is that you’re right here in Manila. While we haven’t heard of anyone going to jail for this, side stepping the geo-block might violate the terms of use. We’re hoping Hulu or Netflix can make it to the Philippines before anyone actually gets into trouble. [/buffer]

[buffer by="10px 15px 0px 15px"] iTunes allows users to rent or buy videos from its library. The selection is fairly decent with blockbusters, documentaries, classics, and content for kids. As long as you have an iTunes account, the service will be there for you at no subscription cost. You pay only when you decide to download. While movies are well represented, TV options don’t exist inside the Philippine iTunes store. In places like the United States, the iTunes library is better stocked, and that goes for both TV shows and movies. [/buffer]

[buffer by="10px 15px 0px 15px"] If you’ve ever made a Google search for “insert- name- of-show watch online for free, then it’s likely you’ve stumbled upon a few websites that claim to have what you’re looking for. Upon visiting these websites, you’ll be greeted by an explosion of pop-up ads and a web layout that leaves much to be desired. TV shows and movies are accessible from these sites but their legitimacy is highly questionable. Before you can even get to your video, you’ll have to dig your way through a black hole of endless links (and more ads). We aren’t endorsing these websites but they’re out there if you’re looking. [/buffer]

[buffer by="10px 15px 0px 15px"] Unless you’ve been living under a rock, we’re sure you’ve heard of torrents as a method for watching movies and shows. A torrent contains the metadata of your target file (i.e. TV Show or movie), and once opened in a torrent client like uTorrent, you’ll be connected to a network of peers who are transferring bits of your target file, allowing you to download it. Despite being illegal, torrents are so common these days that some consumers are fearlessly accepting is as the norm for media consumption.

"Game of Thrones" broke records as the most pirated show in history and HBO didn’t throw a fit, in fact, they were comfortable with it. Should we be alarmed or overjoyed? Let’s look at it this way, TV and movie productions come at a cost, if they can’t convince us to buy the finished product, then what’s next for the industry?

How do you think TV and movie consumption is changing? What ways are you choosing to view your favorite movies and TV shows? Let us know your thoughts! [/buffer]