Even if "X-Men: Days of Future Past" has had its theatrical run (but it's still showing in select cinemas, if you haven't seen it yet) don’t expect the love for Marvel’s mutant team to die down any time soon. After all, the post-credits scene alone is enough to give nerdgasms to fans everywhere. As such, you’re bound to be left with more questions about your favorite mutants.
So for now until the new Marvel film arrives in theaters, here are some story arcs to whet your mutant appetite. They're listed in no particular order (and it goes without saying that you have to read "Days of Future Past" if you haven't already). 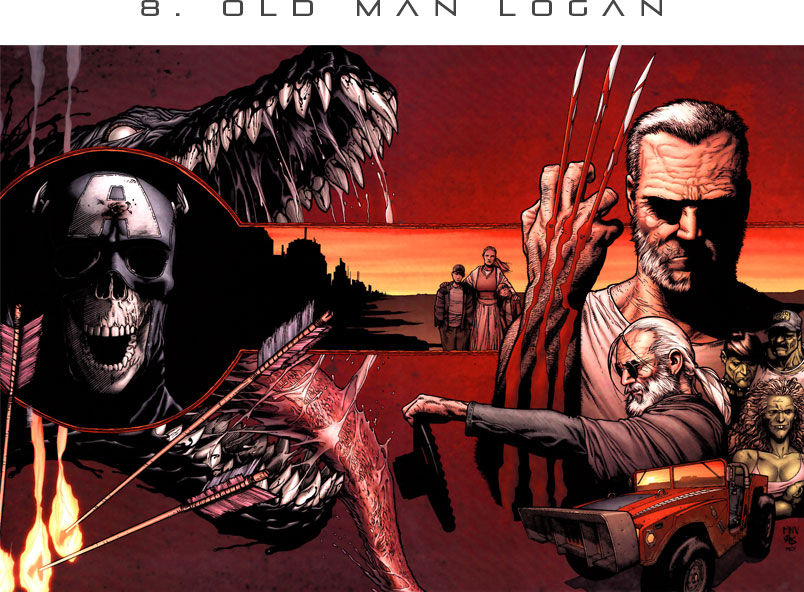 Wolverine # 66-72, Wolverine: Old Man Logan Giant-Size #1
Written by the always amazing Mark Millar and featuring breathtaking art by Steve McNiven, Old Man Logan takes place more than 50 years into the future, where most of Earth’s heroes have fallen and the villains have taken over the planet. Enter the man formerly known as Wolverine, Logan—now a pacifist, a pathetic shell of the hero he once was. He now lives a relatively peaceful life in a farm with a family, bullied and constantly beaten by the Hulk Gang, the gamma-ray infused inbred hillbilly grandchildren of Bruce Banner (who also happen to be Logan’s landlords). In order to pay for his rent and secure his family’s safety, Logan reluctantly accepts a job from his old friend Hawkeye. This is one journey Logan won’t forget.
What ever happened to Wolverine on that fateful night when the heroes disappeared? What made him stop fighting and popping his claws? What killed the hero he once was? Get ready for an extremely violent ride across the post-apocalyptic Marvel universe in this story arc. Every scene feels like a punch in the gut. Marvel fans will no doubt enjoy this mini-series as it is littered with references from artifacts to superhero and villain cameos. 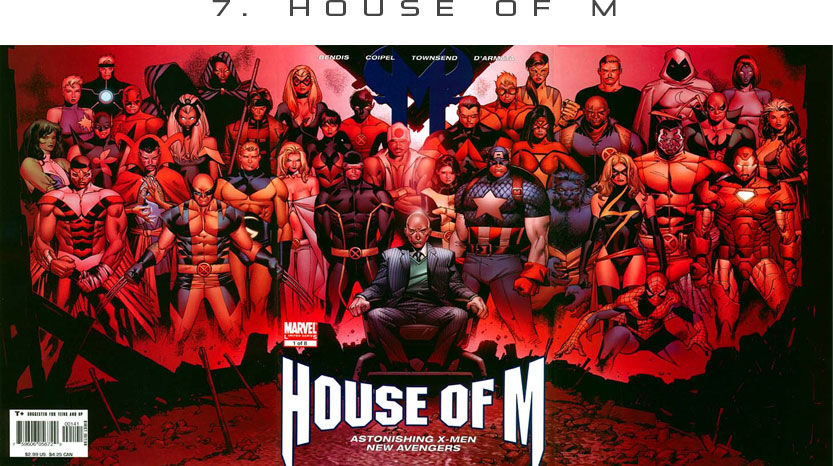 House of M #1-8
What happens when Scarlet Witch (Wanda Maximoff) goes bat-shit crazy and alters the reality of the Marvel Universe? Chaos, that’s what. And that’s a massive understatement. She creates a playground where super-powered beings reign supreme over humans, it becomes a sort of mutant utopia; a world that mirrors the deepest fantasies and wishes of various mutants. At least until the mutants wake up to the realization that their "reality" is a lie, and this is when our favorite mutants take matters into their own hands. But unfortunately, this event would lead to disastrous and mind blowing consequences to mutantkind, with the ripples overflowing into the rest of the Marvel Universe continuity. 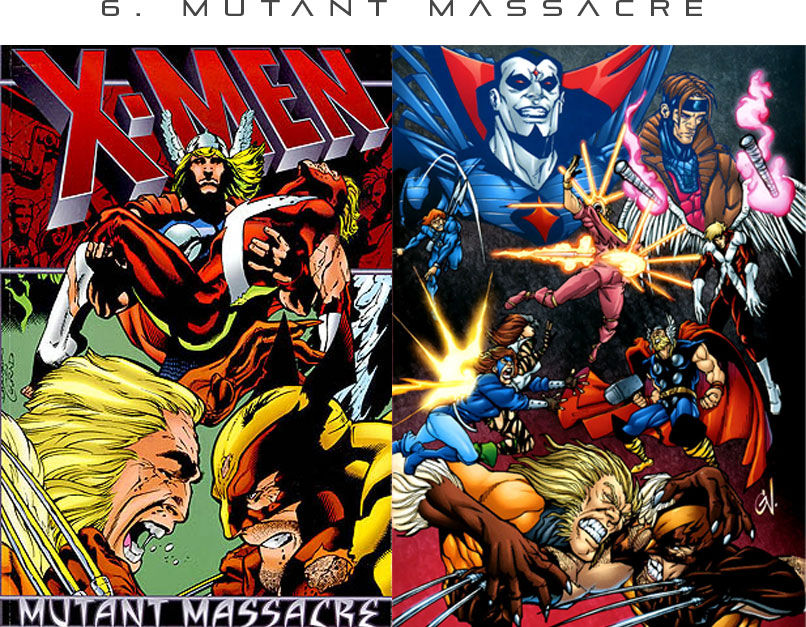 Uncanny X-Men #210-214, X-Factor Vol. 1 #9-11, New Mutants Vol. 1 #46, Thor Vol. 1 #373-374, Power Pack #27, Daredevil Vol. 1 #238
When Mister Sinister is involved, you know things will not end well (he is named Mister Sinister).
When Sinister leads his Marauders team into Manhattan’s sewers to find the location of the mutant outcasts known as The Morlocks. Hundreds of Morlocks are massacred by Sinister’s villains before the X-Men and sister team X-Factor arrive to stop them, with even Thor and the Power Pack joining in on the fray. Needless to say, the X-teams aren’t entirely successful in their mission, with a number of their members getting severely wounded and having drastic consequences that would trigger numerous events in the Marvel Universe.

X-Men Alpha Vol 1 #1
With news that Bryan Singer’s next X-Men movie will be based on the "Age of Apocalypse" story arc, it’s only fitting that you at least get familiar with the book.
What happens when Professor X’s son Legion (yes, he has a son and he is as insane as he is powerful) travels back in time to kill Magneto but ends up killing his father instead?  What happens to the Marvel Universe when the X-Men was never guided by Charles Xavier in the first place? We see a new timeline, with Bishop as the only X-Men who witnessed to incident. It's now up to him to restore the original timeline.
What makes this book interesting is that we see Magneto as the mutant who forms the X-Men but incidentally, Apocalypse, who also witnessed the murder of Xavier, takes full advantage of it.
Apocalypse is considered as the first mutant in existence. When his clan was forced into slavery by a rival nomadic tribe, he rebelled and was eventually killed by the tribe's leader. However, he was revived shortly after by his mutant powers. He discovers ancient alien technology underneath Egypt, and uses it to destroy the tribe's leader and soon, Egypt's other rulers.He would then use said technology to regenerate and travel in different periods of time. And with every regeneration, he grows even more powerful. He is a power hungry being, believing only the strong survive. Soon after, he founded the Horsemen of Apocalypse as an effort to force humankind into slavery, and to make mutants reign supreme.
In X-Men Alpha, Apocalypse and his Horsemen conquer North America and makes mutants the ruling class and then launches a genocidal campaign against humans. With Bishop trying to repair the timeline, it’s up to Magneto’s X-Men to put an end to Apocalypse’s insanity.
As a plus, this is where we first get a glimpse of the purple-haired mutant known as Blink, who appeared in the "Days of Future Past" film. 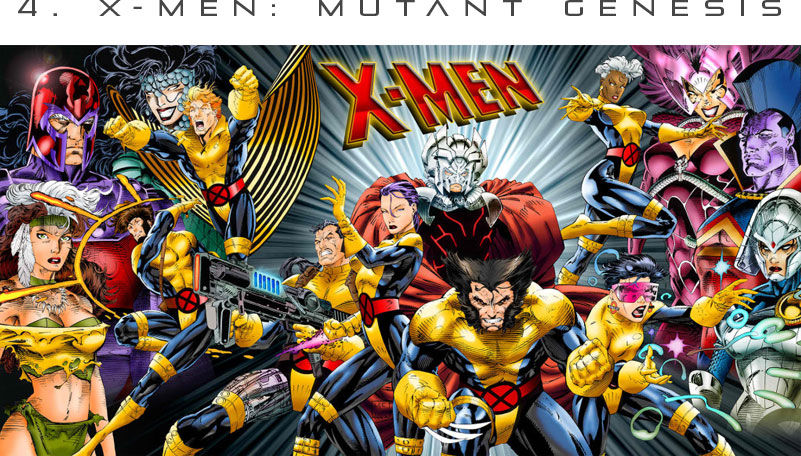 X-Men Vol. 2 #1-3
Writer Chris Claremont capped off his award-winning run with Marvel, and 17-year run on the X-Men, with Mutant Genesis. This story arc set the bar for the X-Men franchise and is considered as the best-selling comic book of all time according to the Guiness Book of World Records. Mutant Genesis had plenty of action and drama.
Magneto threatens the world with total domination, capturing some of the X-Men members in the process and brainwashing them to his cause. If that’s not enough for you, what’s left of the X-Men still have to worry about the dangerously insane Omega Red.
The series also launched the X-Men Gold and Blue teams and Jim Lee’s artwork and character designs would be the archetype for the look of the X-Men: The Animated Series. And with that, the intro theme is now stuck in your head. HA!

3. Fall of the Mutants 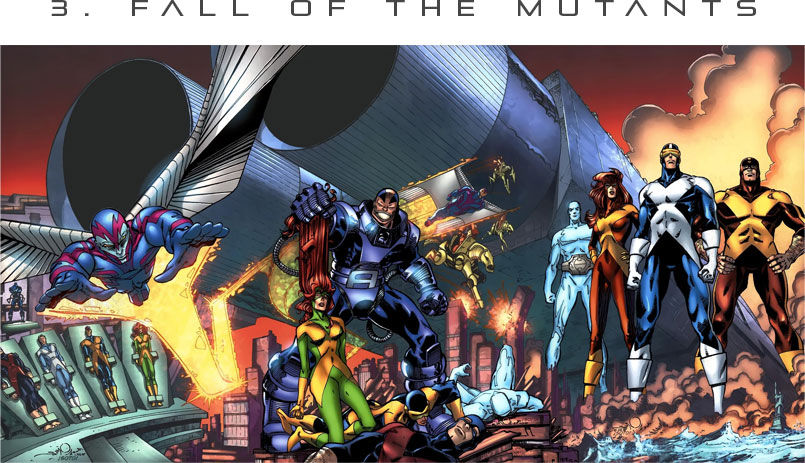 New Mutants (1983) #55-61, Uncanny X-Men #220-227, X-Factor (1986) #19-26, Captain America (1968) #339, Daredevil (1964) #252, Fantastic Four (1961) #312, Incredible Hulk (1968) #340, Power Pack (1984) #35
The X-Men head to Dallas to find their then-leader and depowered Storm. Upon arrival, the government-sanctioned Freedom Force (led by Mystique) arrives to arrest them. However, Freedom Force member Destiny, who is.jpgted with second sight, predicts that everyone inside X-Factor member Forge’s penthouse will die by dawn. All of a sudden, cavemen, dinosaurs, and all sorts of weird creatures wreak havoc in the country, not to mention hordes of demons and a being of unimaginable power. If that wasn’t enough, Apocalypse with his Four Horseman decide to wage war on mankind in this epic story arc full of magic and alternating universes and timelines. Oh, members of the different X-Teams die in the process. 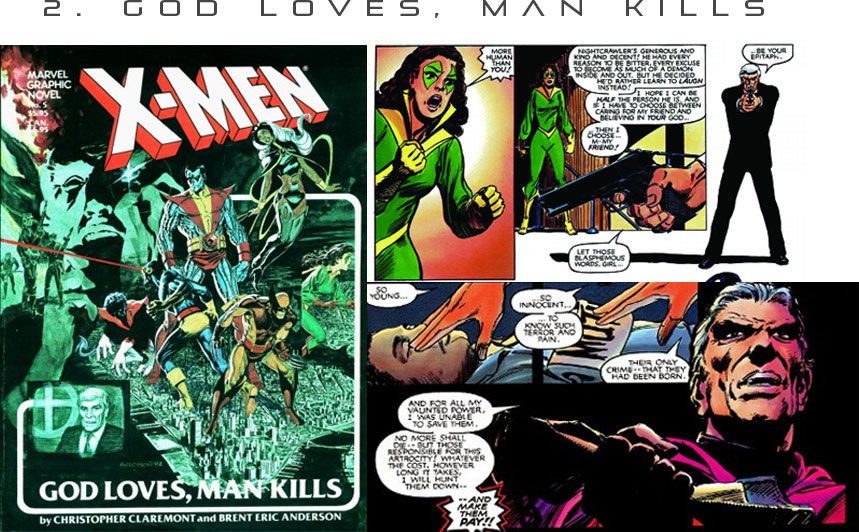 Marvel Graphic Novel #5: X-Men - God Loves, Man Kills
Two young mutants are fleeing from a religious anti-mutant group called The Purifiers. The group catches them, murders them in cold blood, and strings them up in a swing set with a sign labeling the children as "Muties." Long-time X-Men foe Magneto finds the bodies and vows revenge on those responsible. The X-Men are forced to join Magneto to take on the leader of The Purifiers, a charismatic preacher and televangelist named William Stryker, who calls for the genocide of mutantkind in the name of God.
God Loves, Man Kills does an amazing job of representing mutants for any real-world minority and marginalized groups who experiences oppression, prejudice and cruelty for the most part of their lives. This graphic novel is brutal and gut-wrenching; conjuring up harsh images oflynching and discrimination. This is definitely one of writer Chris Claremont’s most powerful stories. 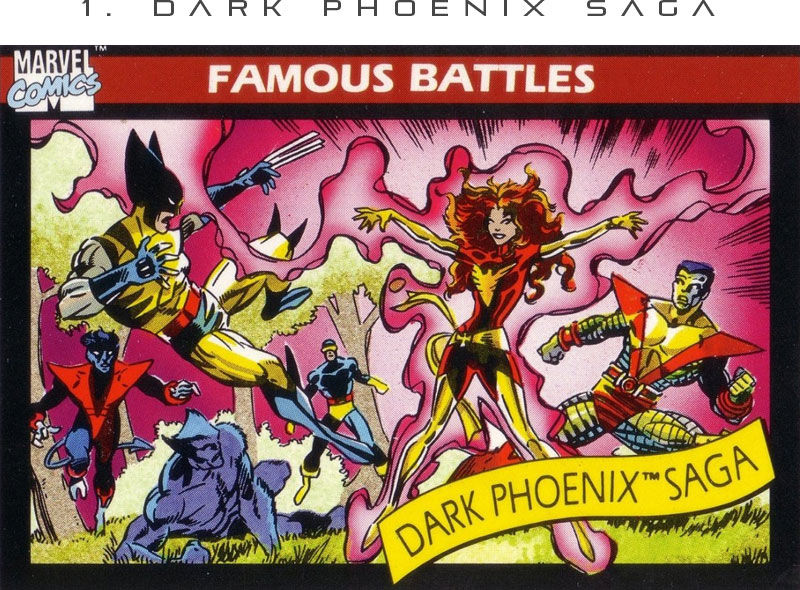 Uncanny X-Men #129-138
There’s no question that the Dark Phoenix Saga is one of the most iconic and emotionally-charged Marvel sagas of all time.
After saving her teammates and getting exposed to deadly solar radiation, Jean Grey emerges from the whole ordeal achieving her extreme potential as a telepath and telekinetic, complete with a new costume and a new codename, Phoenix. Seeing the potential of her powers, the evil Hellfire Club manipulates Jean into letting the “Dark Phoenix” persona take over for their own personal gain. Things don’t go well as planned, as she her powers drive her insane and she leaves a trail of destruction across the galaxy, destroying a planet and its population in the process. This alerted the Shi’ar empire to assemble a council of inter-galactic beings to decide that the Dark Phoenix must be put to death. How? By destroying the solar system, that’s how. A battle royale then ensues between the Shi’ar’s champions and the X-Men, with our mutants getting beaten badly. As a last ditch effort, Jean struggles to regain control of her persona and tragically sacrifices herself to save her team-mates and our world, but not without making an emotional goodbye to Cyclops. This marked the first time a core member of the X-Men died. Needless to say, the team was never the same again.
Thirty years later, the Phoenix Force is still used for existing storylines, and has possessed other beings such asColossus,Namor, evenCyclops.


These are just a few stories of why the X-Men has made a lasting impact not just in comics, but in pop culture in general. There are still tons of stories for you to read, from the Avengers taking on the X-Men, Joss Whedon’s critically-acclaimed run on the “Astonishing X-Men," and more. Literally MORE. So get to it and start reading and don't forget to post your thoughts and feels in the Comments Section.